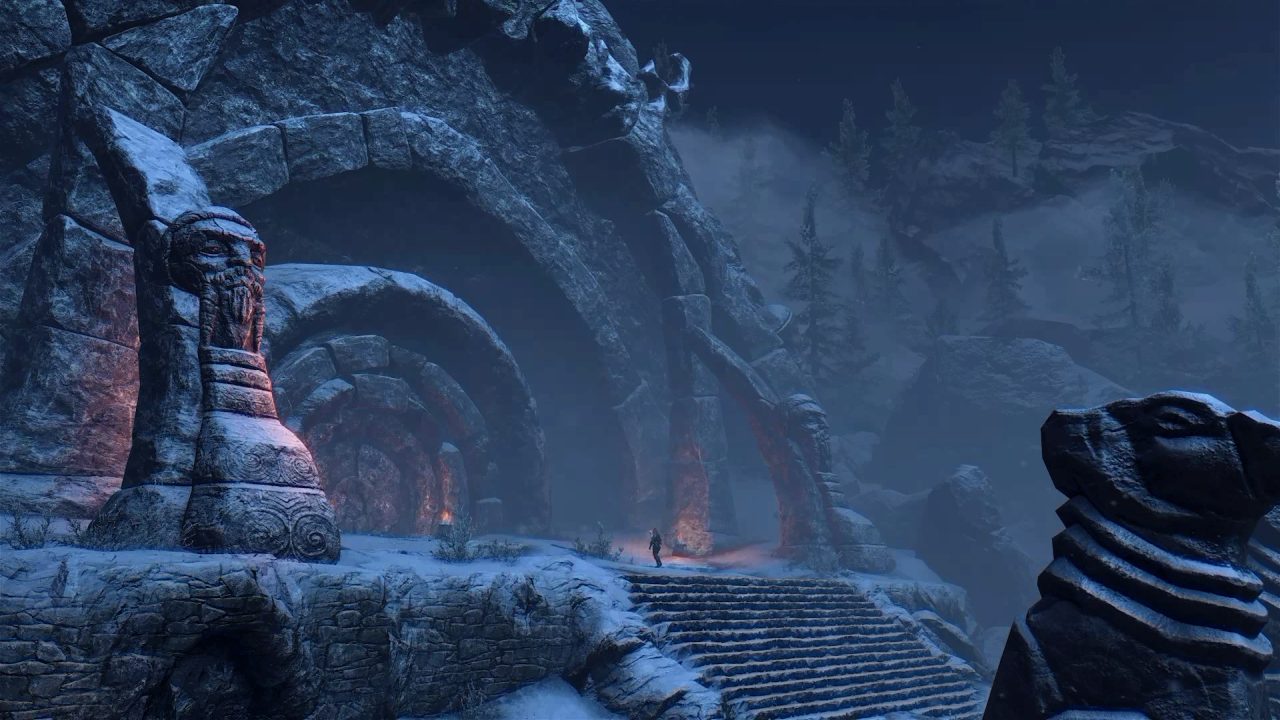 The Elder Scrolls Online: Greymoor Review – Creatures of the Night

Greymoor is the newest expansion for The Elder Scrolls Online, the MMORPG that lets players run wild around the fantasy world of Tamriel. Whether you enjoy questing, player-versus-player battles, or dungeons designed for large groups, The Elder Scrolls Online usually delivers. The Greymoor expansion takes players to the cold coasts of Western Skyrim, a land which many players will recognize from The Elder Scrolls V: Skyrim. It seems that publisher Bethesda has grown tired of re-releasing the classic RPG onto modern systems, instead opting to finally include its landmass in the ever-growing world of ESO. While Greymoor offers plenty of nostalgia as you battle vampires and werewolves across Skyrim, some fans might worry that the creative well is starting to run dry. Is The Elder Scrolls Online: Greymoor a worthwhile expansion that accurately translates the beloved world of Skyrim into the MMORPG genre, or is this a meager grab at nostalgia and a sign of a dying game? Let’s see if this expansion is worth the grind.

The Harrowing World of Western Skyrim

Greymoor is set in the familiar land of Skyrim, but the story takes place roughly 1,000 years before the events of The Elder Scrolls V: Skyrim. So while the lands and towns might look somewhat familiar, the characters you meet and stories you experience will be wholly fresh. For the most part, Greymoor centers specifically around Western Skyrim, a portion of the land that is ruled by the stubborn King Svargrim. Svargrim’s refusal to join the Ebonheart Pact faction has resulted in a great deal of tension with Eastern Skyrim, but far greater threats seem to be afoot. As you arrive in Skyrim at the beginning of Greymoor, horrifying and destructive supernatural “harrowstorms” have begun to pop up across the land. In an effort to reason with King Svargrim and solve the mystery of the sudden harrowstorms, you head into Western Skyrim eager for adventure.

Unfortunately, the overall narrative of Greymoor is surprisingly middling and by-the-numbers. Although the plot heavily features vampires, werewolves, and other cool supernatural creatures, the main story is altogether predictable and standard fare. When things start to get more convoluted towards the end of the main quest, there’s a good chance you’ll stop caring. Even when compared to the exceptionally standard quests in the mainline Elder Scrolls Online experience, Greymoor pales in comparison.

The side quests, which are usually the highlight in any ESO expansion, are even worse, often boiling down to simple fetch quests or uninspired dungeon delves. The most interesting concepts are recycled a few times as well, so even the better narrative content feels repetitive. Apart from an interesting character here and there or the occasional compelling quest, the narrative content in Greymoor is consistently disappointing and a bit perplexing when compared to past expansions.

Despite the major problems with the story, Greymoor redeems itself ever so slightly in the visuals department. The majority of Greymoor‘s content is split across two maps: the icy tundras and mountains of Western Skyrim, and the luminous, dank Blackreach Cave system. Both regions are great to look at, with beautiful vistas and impressive displays of color. I especially enjoyed the larger sections of Blackreach, as they provide a great sense of scale and adventure.

You’re encouraged to explore these new areas (and old ones as well) through the new scrying and excavation skill-lines, which see you digging up priceless treasures and gear across the map. Part symbol-matching puzzle and part hot-and-cold treasure tracking, the scrying and excavation skills are enjoyable and provide a nice change of pace. These fun treasure hunts often more than just monetary rewards, with potential mounts, pets, and armor pieces to be won. Simply put, scrying and excavation are excellent additions to the overall ESO gameplay loop and one of Greymoor‘s best inclusions.

During your adventure, you’ll definitely run across some visual glitches, including unloaded textures, floating objects, and more. I also encountered a few gameplay glitches on repeat occasions, including invincible enemies, multiple game crashes, and more. Greymoor also makes some big changes to both the vampire and werewolf skill options, which work to varying degrees. For example, transforming into a werewolf is now considered a criminal act, so if a guard of townsfolk sees you doing so, you’ll quickly earn a beating. Unfortunately, I consistently encountered a glitch (more than six times) where the game improperly tracked my transformations, forcing me to restart my game and pay off huge in-game fines to clear my name.

These glitches can be annoying, but they only exacerbate a bigger problem with Greymoor. Despite how lush and visually appealing the maps are, they often feel barren, empty, and lifeless. With the exception of the dozens of player-characters running around the world at a given time, Greymoor‘s locales feel hollow and a bit boring. There were plenty of times that I stopped and appreciated the aesthetic of my surroundings, only to realize just how thinly stretched the content feels. Most of the best quests and events are located in Blackreach too, which makes the top-side portion of Western Skyrim feel even more underbaked.

What Goes Bump in the Night

For all the disappointing aspects about Greymoor, one thing remains true; it’s still plenty of fun to run around and adventure with your friends. While the quests themselves are sub-par when compared to other expansions like Summerset, Morrowind, and even the most recent Elsweyr, the world-events and group bosses in Greymoor are tons of fun and provide some explosive entertainment.

New harrowstorm events work similarly to the dolmen events in the vanilla game, but provide an awesome visual spectacle. During a harrowstorm event, the skies turn blood-red as players attempt to tear down witch pikes and defeat a towering boss enemy. The harrowstorms are consistently entertaining and provide a decent challenge as well, which is a nice change of pace from some of the easier world events in the past.

In fact, there are tons of cool new enemies and creatures to discover and destroy in Greymoor. New enemy designs are just as impressive as the environments they inhabit, but are equally underutilized. With such a rich cast of interesting enemies, it’s disappointing to see most of them boil down to simple cannon fodder. Regardless, Greymoor still manages to provide exciting action and entertaining battles. If you’re looking for new content to smash and loot, Greymoor definitely still delivers it.

The Bottom Line on The Elder Scrolls Online: Greymoor

There’s a lot about The Elder Scrolls Online: Greymoor that I like. It’s a beautiful expansion with some extremely cool enemies and bosses, and the inclusion of vampires and werewolves as a narrative focal point is a nice change of pace. Many of the world events and public dungeons are tons of fun, resulting in enjoyable play sessions that scratched my MMORPG itch. Unfortunately, when compared to previous ESO expansions (and at times, the base game), Greymoor feels like a 30-hour distraction. Whereas other ESO expansions kept me coming back for more, Greymoor felt more like a jumbled checklist of somewhat interesting things.

If you’ve been playing The Elder Scrolls Online for a while and you’ve already played through the previous expansions, Greymoor is still a good chunk of content that’s worth exploring. The new scrying and excavation mechanics are fun and a great way to encourage exploration, helping to flesh out both new and previous content. It’s also nice to see familiar locations in Skyrim, which provide plenty of nostalgia. That said, Greymoor is the weakest ESO expansion I’ve played so far. A handful of fun encounters and interesting mechanics keep it from being a complete disappointment, but almost everything else about Greymoor feels rushed and underwhelming. There’s fun to be had in Greymoor, but it’s best to spend a few hundred hours on the other expansions first.