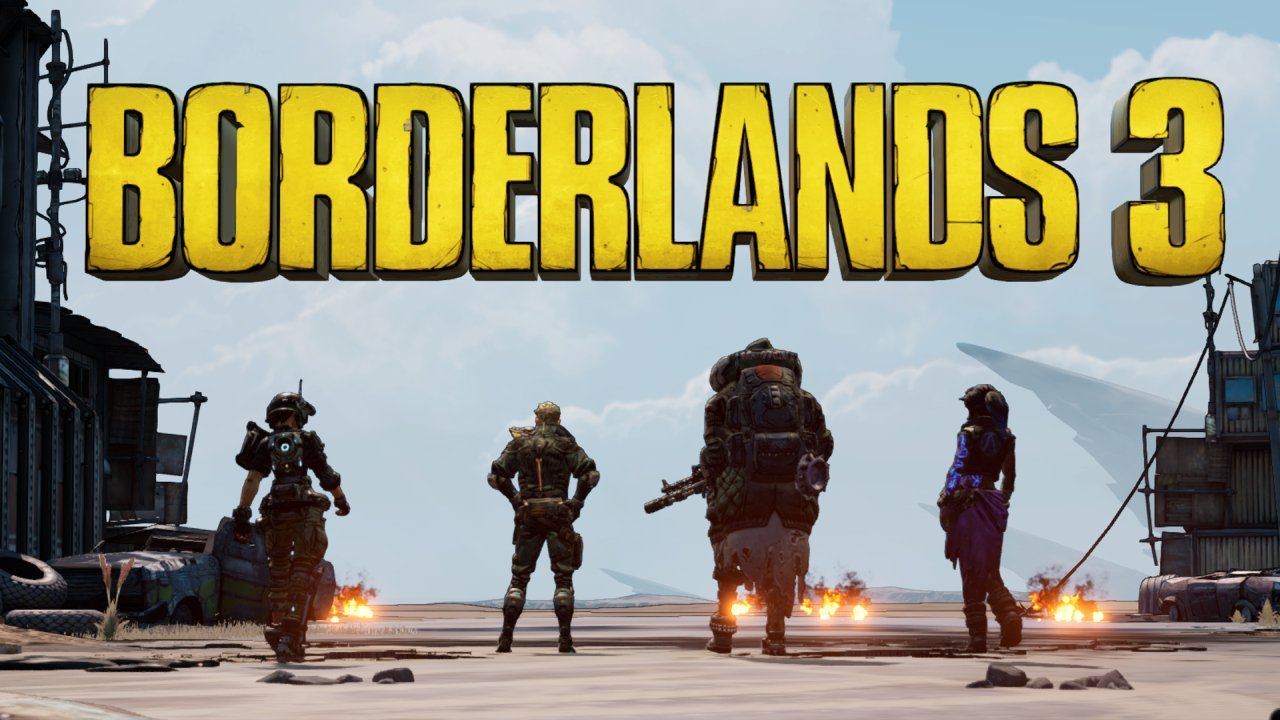 Borderlands 3 is a sequel in the much-beloved shooter-looter franchise, Borderlands. Arriving nearly fiver years after the release of Borderlands: The Pre-Sequel, this sequel promises a bigger and better experience with a brand new cast of characters. Developed by Gearbox Software and published by 2K Games, Borderlands 3 has been surrounded by a substantial amount of hype and anticipation. Many players fondly remember their time with the Borderlands franchise, likely blasting through enemies and grabbing new guns with a full party of friends. Borderlands 3 entices us back into the world of four-player cooperative shooting with vibrant graphics and over-the-top storytelling. That said, it’s been a long time since we’ve set foot on the planet of Pandora as illustrious Vault Hunters. Lets find out if Borderlands 3 provides a worthwhile adventure full of loot, or a lackluster follow-up in an aged and dying franchise.

Borderlands 3 opens up as all Borderlands titles do, with a story told by the chubby and lovable Marcus. Marcus informs the player of the mystical world of Pandora, a planet where mercenaries known as Vault Hunters search for legendary vaults that hold untold treasure. We are introduced to a ragtag group of four Vault Hunters: Amara, Zane, Moze, and FL4K. Together, the crew are answering a recruitment call for the Crimson Raiders, a mercenary group founded by the original Vault Hunters. Once they meet up with Lilith, the leader of the Crimson Raiders, they find out just how much Pandora has changed.

Once separated into ravenous groups, the psychotic bandits of Pandora have now aligned under one banner, a cult called the Children of the Vault. Led by a pair of narcissistic villains known as the Calypso Twins who live-stream their escapades, the Children of the Vault grow in power as their combined numbers create a sizable force. Lilith and the rest of the Crimson Raiders have been too distracted to do anything about it until you show up, as the Children of the Vault have just recently stolen a map that details the locations of several vaults hidden across the galaxy. In order to take down the Calypso Twins and end the COV’s reign of terror, the Vault Hunters will have to travel far and wide.

For the most part, the story of the Vault Hunters vs the Children of the Vault gives players plenty of motivation to continue. New characters pop up with frequency, important events have lasting consequences, and there’s plenty of signature Borderlands humor. However, the narrative does struggle with some pacing issues, as it feels a bit drawn out towards the end. When it works, the narrative in Borderlands 3 can be exceptionally funny and rich with emotion. Other times, it can feel a bit repetitive and boring. Luckily, the majority of lengthy experience is entertaining, but occasional pacing problems can make the gameplay feel arduous.

Each of the four Vault Hunters have their own unique skill trees to upgrade, ultimate abilities to use, and class mods to equip. While the meat of Borderlands 3 is mostly run-and-gun mayhem, there’s enough nuance between the four characters to count. FL4K is a robotic Beastmaster, with a number of commandable pets to take into the fight. Zane is a scout extraordinaire, with the ability to make a digital clone of himself to confuse enemies while his automated drone picks them off from the sky. Amara uses her siren powers to summon giant magical fists, pummeling enemies and holding them in place. Finally, Moze lets her guns do the talking, as her skills focus on firepower and her hefty mech-suit called the Iron Bear.

After you’ve chosen your champion and embarked into the wild land of Pandora, you can deck them out with custom clothing patterns, helmets, and other cosmetics as you see fit. You’ll occasionally find cosmetic items hidden in chests or dropped by enemies, but some can be purchased using a precious crystal known as Eridium. Additional cosmetic elements like weapon trinkets and goofy head replacements add a further spark of visual personality, allowing you to fine-tune your look and stand out from other players.

Ideally, Borderlands 3 is best played with a full party of four, with each player utilizing their unique character abilities for maximum damage. Luckily, each character is powerful enough to survive the game solo, so you’ll never have to worry about being under-powered when facing things alone. That said, Borderlands 3 is a bit more difficult than past games in the franchise, adding a new layer of challenge to the experience. Regardless of what character you pick, it can be tough to survive when you’re surrounded by a dozen or so enemies and they all have explosive weapons aimed at your head. Luckily, each character is fun to play and offers a good variety of playstyles to experiment with.

If you’ve played any of the mainline Borderlands games before, you’ll be right at home playing Borderlands 3. Although it’s been a full console generation since the last Borderlands title, Gearbox has chosen to keep most of the modern changes in the realm of quality-of-life improvements. The main focus of Borderlands 3 is to kill everything in sight, loot chests and complete quests, and level up your Vault Hunter as you go. Gameplay is quick and your movement speed is fast, giving an experience comparable to Destiny 2 (with less float).

There are an excessive number of valuable weapons and gear to find, including grenade mods, shield technology, and cosmetic items. Guns are branded by nine fictional gun companies, each with their own distinct style and flare. Borderlands 3 places a bigger emphasis on these companies both in narrative and gameplay, further encouraging you to figure out the differences between them. The guns are as varied as they are ridiculous, with slick visual designs and inventive perks and abilities. Weapons often deal out elemental damage as well, including shock, fire, corrosive, and others.

Of the various changes and additions that have been made to the gameplay, the inclusion of alternative firing modes is one of the stand-outs. Some guns have two firing modes that can be quickly toggled between with a simple button press. Sometimes guns will switch between semi-automatic and burst fire, while others holster hidden grenade launchers and other wicked modifications. One of my favorite elements of Borderlands has always been the immense variety in weapons, and alternative firing modes simply adds another layer of discovery to each gun.

In Borderlands 3 it seems like Pandora just isn’t big enough, as there are now multiple planets available to explore. Your adventure will take you to a number of different planets, including Promethea, which houses a sprawling neon city infested with evil robots. There’s also Athenas, where a peaceful monastery has been overrun by a high-tech weapons company. Like any other open-world RPG, you’ll run around picking up quests from characters in various locations, leading you to spots of interest along the way. Vehicles make it easier to traverse larger areas, with a variety of post-apocalyptic and futuristic transportation to unlock and upgrade.

There’s a main quest-line you can stick to if you want to speed through things, but most of Borderlands 3‘s environments are worth exploring. Side missions fill out the experience with exceptionally wacky stories that are often full of dark humor. Additional content can be found through exploration, including unique boss fights, vehicle bounties, combat challenges, and more.

A few quality-of-life improvements make exploration easier than before, which is something the Borderlands franchise has struggled with in the past. While you’re playing, you can quickly swap between your active quests with the press of a button, allowing you to check waypoints without pausing. Both the mini-map and the main map starts out gray, but fills with blue color as you explore it. In addition to showing you which rooms and areas you’ve forgotten to visit, the coloring mechanic also acts as a compulsory side distraction. I often found myself running into dead ends and hopping around areas, if only to clear up the remaining gray spots on my map. There are still some features that have been obviously overlooked, like the ability to see all quest objectives on your map at once, but the other improvements make these omissions easier to deal with.

The Bottom Line on Borderlands 3

Borderlands 3 continues the series’ tendency to be completely over-the-top and bombastic, in both storytelling and gameplay. Characters are loud and exaggerated, quests are silly and explosive, and the visuals are unique and vibrant. The experience is lengthy and entertaining, and only loses steam towards the end. At its worst, Borderlands 3 can feel juvenile in humor and repetitive in mission design. Occasional visual and gameplay glitches can cause annoyances, but these are rare and have been mostly fixed with post-release patches. That said, these low points are few and far between. Borderlands 3 gives players dozens of hours of gleefully violent entertainment, spotted with dark humor and pop-culture references. It’s not a perfect game, but it’s a worthwhile sequel that doesn’t stray too far from its design formula.

If you want to shoot countless enemies with an increasingly wacky and dangerous assortment of weapons, Borderlands 3 serves that up in droves. The mixture of exploration and explosive combat provides a fun and familiar gameplay loop, and the narrative is mostly a win. Even though it can be a bit redundant and doles out some cringe-worthy humor, Borderlands 3 provides players with a chaotic and action-filled shooter experience that’s identifiable and unique. While it might not be everyone’s cup of tea, Borderlands 3 should definitely impress fans of the franchise while still managing to rope in newcomers with its wild attitude and endless array of inventive guns.