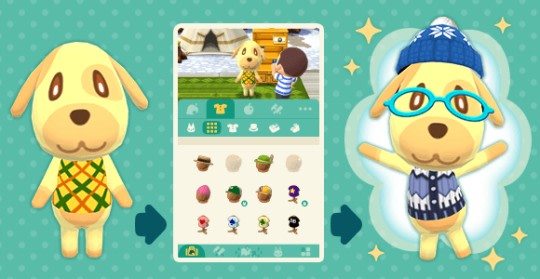 Nintendo has been steadily updating Animal Crossing: Pocket Camp since its release at the end of last year. It looks like the company has been listening to feedback from players regarding the app game, as some much needed changes and content additions are on their way.

A good tune up is coming with Pocket Camp‘s next major update. Some of the game’s more temperamental features are receiving a face lift, such as asking friends for help to enter Shovelstrike Quarry and the easily overlooked Market Boxes. The new garden area will also see some improvements, but Nintendo has not shared any specifics just yet.

Brand new features are also on the way to your campsite! Soon you will be able to dress villagers in clothing from your inventory, as shown in the above image. Directly changing villagers’ clothing has been seen in the spinoff 3DS game Animal Crossing: Happy Home Designer but has not made its way to a mainline title yet. Maybe this Pocket Camp feature is a clue for what’s to come in the next entry in the series.

Another incoming feature will allow you to customize the terrain and backdrop of your campsite. The above image shows choices like bamboo, flowers, or cedar trees for the area surrounding your camp. This adds to the customizable furniture layout and amenities you can build in Pocket Camp, thus allowing for even more creative freedom when designing your campsite.

New bugs and fishes will be included in the approaching update, as well as the ability to lay out two whole rugs in your campsite instead of just one! Praise be. We’ll keep you updated on the latest Animal Crossing: Pocket Camp news, including a release date for this welcome update full of improvements.