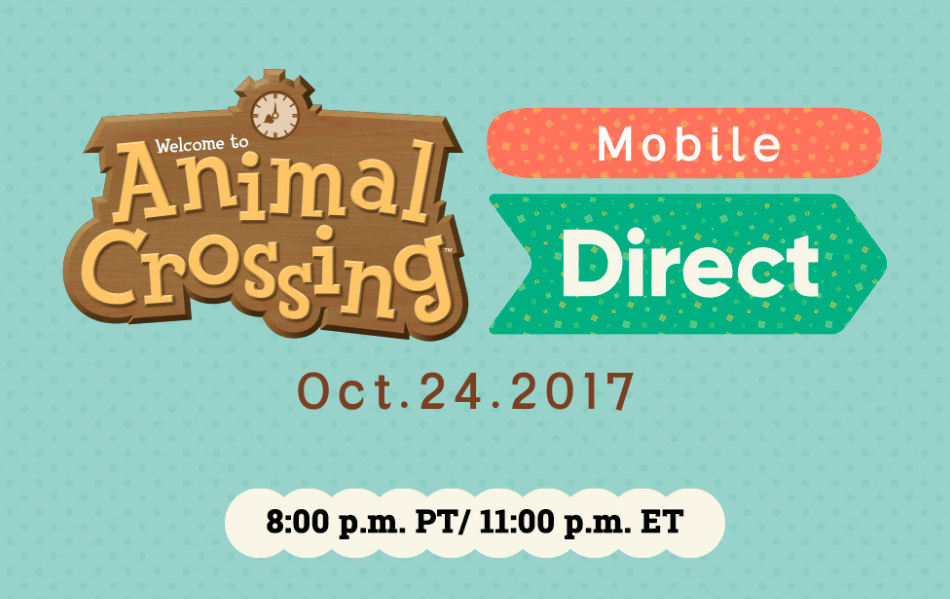 After months of waiting, Nintendo is officially revealing the Animal Crossing mobile app this week in a special Nintendo Direct live stream. The presentation will focus exclusively on the mobile game and will begin at 12 p.m. Japan time this Wednesday, October 25th — or 11 p.m. EST on Tuesday, October 24th.

Nintendo announced the Direct on the Japanese Nintendo Twitter account and again on the official Animal Crossing Tumblr. It is unclear whether the presentation will be in Japanese only or with a separate English stream airing concurrently.

The English announcement on Tumblr reads, “Tune in for a roughly 15-minute Animal Crossing Mobile Direct video presentation focused exclusively on the upcoming Animal Crossing mobile title. There will be no updates on any other topics including other mobile, Nintendo Switch, or Nintendo 3DS software.”

Well, at least they aren’t getting our hopes up for an Animal Crossing Switch game reveal. The last mainline title in the series, Animal Crossing: New Leaf, released in 2012, and fans have been impatiently waiting for an announcement of a new game for a while now. Still, the mobile app has been long awaited as well, and any news is good news at this point.

The Animal Crossing mobile title was originally announced in 2016 with a planned release in March 2017. After a couple of delays and concerns from both the public and investors, Nintendo reconfirmed the app game for “this fiscal year,” meaning any time before March 2018. It’s anyone’s guess when the title will actually launch, but we should find out an official date during this week’s Direct.

We’ll be sure to cover any news revealed in tomorrow’s Nintendo Direct, so stay tuned.