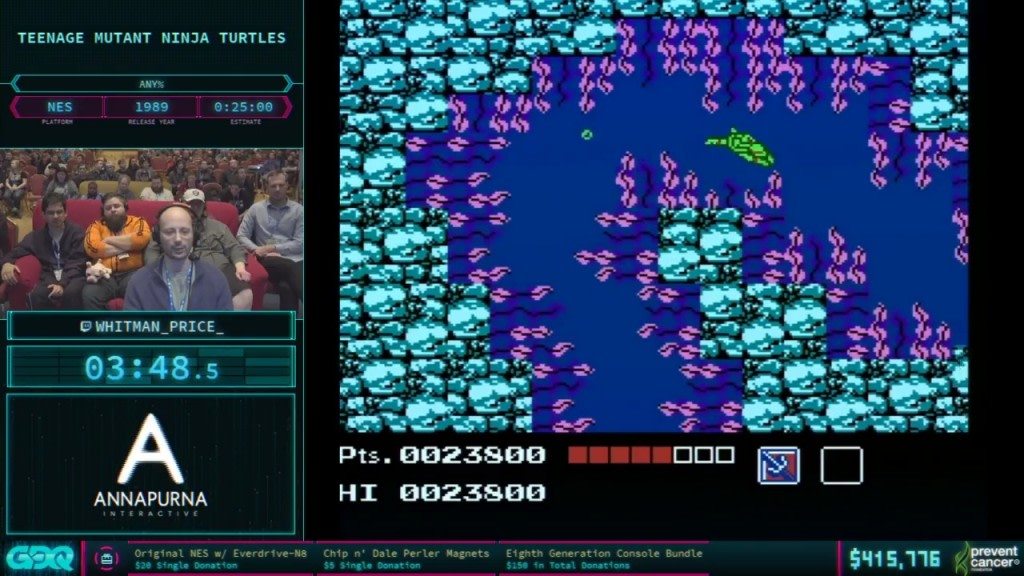 AGDQ 2018 has surpassed the halfway point, rounding out day four of the seven day marathon.  Over the course of the week we’ve seen plenty of amazing runs, and day four gave us even more great content.  Early morning capped off the end of the horror block, and the rest of the morning was filled with NES retro goodness.  Teenage Mutant Ninja Turtles had a back-to-back with Battletoads, and our chubby Nintendo mascot Mario finished off the evening.  With so many great runs, it can be hard to pick and choose what to watch.  If you missed any of these great runs, be sure to check them out on VOD.  With that, here’s my list of the best runs from day four of Awesome Games Done Quick 2018!

You can watch the marathon live at here on Twitch, and check out the schedule of what’s to come over at their website.  Additionally, you can watch past runs on demand on the Games Done Quick Twitch channel.  Also, be sure to check out our social media platforms (@official90skid on Twitter) for live updates on the marathon! 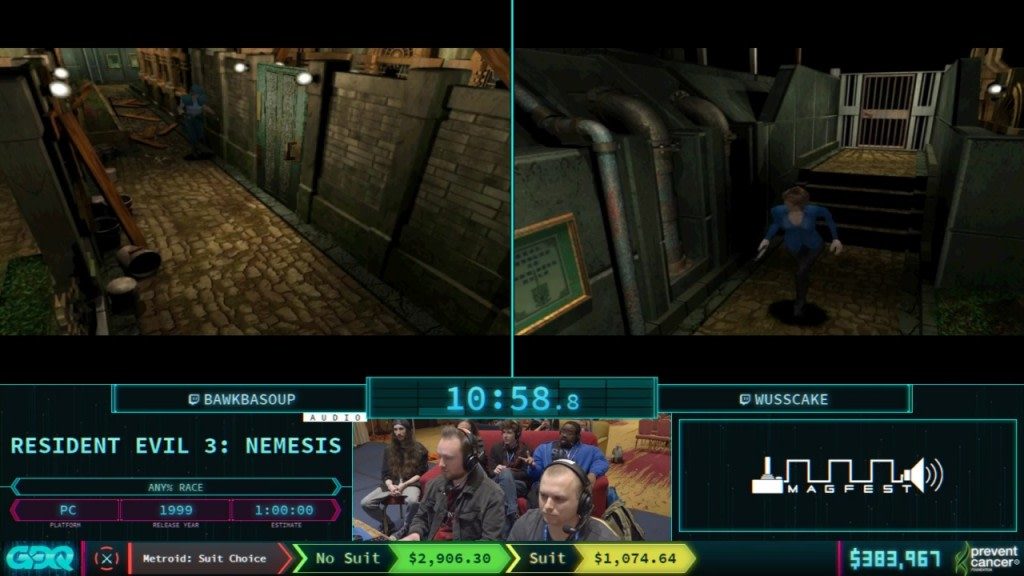 The horror game block continued late into the night, peeking into early Wednesday morning.  After the exciting Resident Evil 7 run, runners bawkbasoup and wusscake geared up to race to the finish in Resident Evil 3.  Excellent commentary by Carcinogen and the rest of the couch made the run easy to follow, despite the quickly shifting camera.  I don’t really enjoy playing Resident Evil 3, but that’s a personal preference.  However, it was highly impressive to see just how evenly matched these runners were.  Mostly seconds apart, the run culminated in a devastating loss.  As far as speedrun races go, this was one of the best I’ve seen. 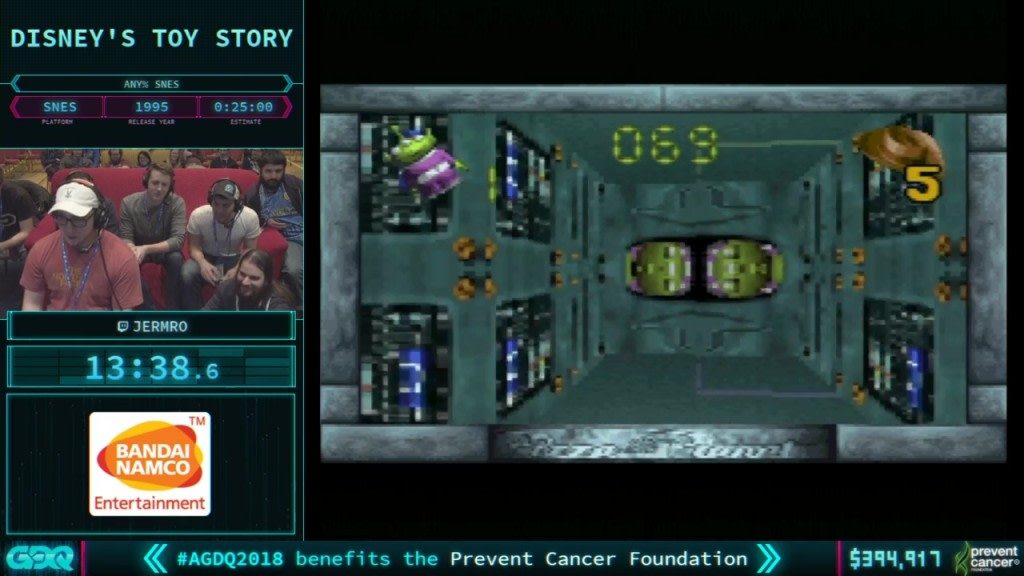 There are certain runs at AGDQ that some people will hate, and others will love.  As AGDQ has turned towards more family friendly standards, loud and boisterous runners and crews are becoming less and less common.  At nearly 5AM, JermRo sat down to take on Disney’s Toy Story, a punishing Super Nintendo/Genesis game that haunts many childhoods.  The energy and rowdiness started off pretty contained, but before long, nearly every person in the room (audience members alike) were hooping and hollering, joking along with JermRo and crew.  The high energy accompanied by a drunkenly slurring commentator made for absolutely hilarious moments, and a great amount of personality shined through.  However, the run was more than obnoxious comedy.  JermRo made sure to point out all the intentional tricks and tips he was performing, all while effortlessly maintaining audience attention and playing the game at peak performance.

Batman: The Video Game (any% race) by dxtr and EndySWE 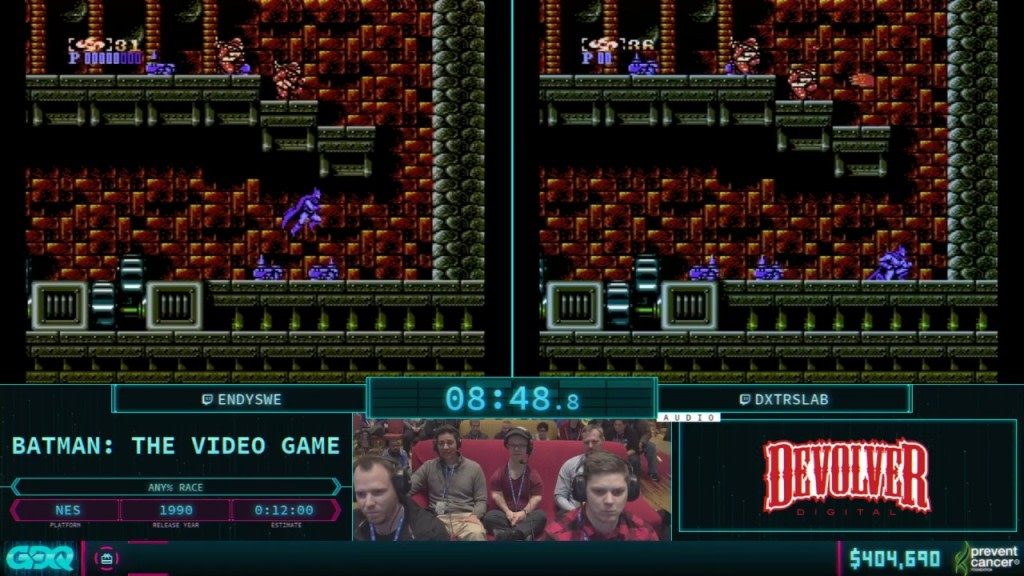 Both EndySWE and dxtr are renowned speedrunners, often regarded as experts in many retro NES games.  I’ve seen much more of dxtr at past GDQ events, but was equally impressed with EndySWE’s performance despite my favoritism.  Paired with the extraordinary commentary of Blechy, the two runners smashed through Batman: The Video Game in near-record time.  However, the truly exciting part about this race is just how damn close the runners were to each other.  Neck and neck would be underselling it; these runners were mere milliseconds apart from each other.  One of the most intense races I have ever had the pleasure of watching, Batman: The Video Game will definitely be one of the most memorable races of the entire marathon. 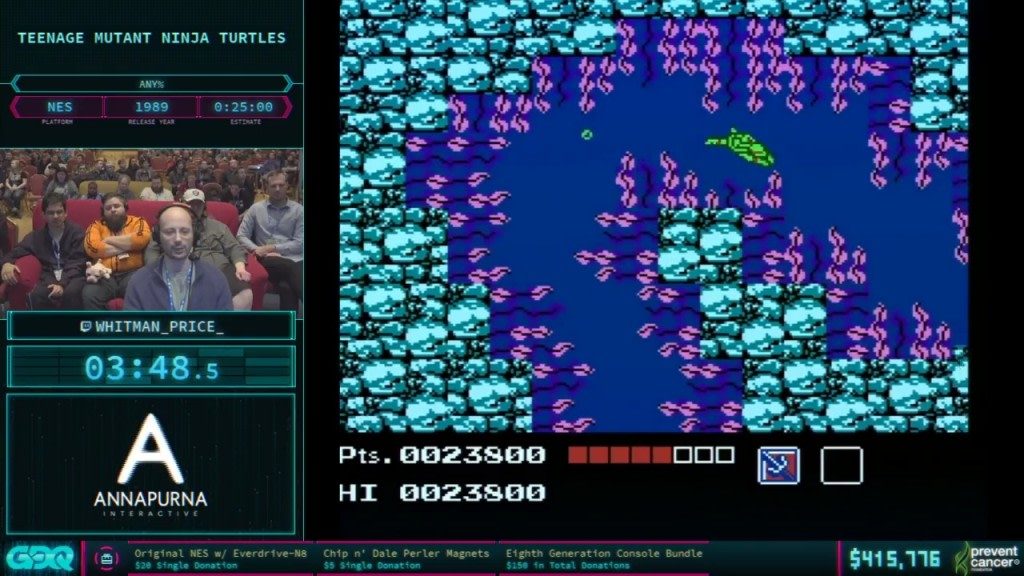 I’m sure many of you remember not only this NES game, but this very screen pictured above.  Teenage Mutant Ninja Turtles, like many other NES games, was brutally difficult.  Watching runner Whitman_Price pick apart the game was impressive, but I was more impressed with his ability to commentate the entire run.  Going into in-depth detail, Whitman_Price explained every aspect of every trick, all while playing.  This run earns extra points for nostalgia, and the commentary made things educational. 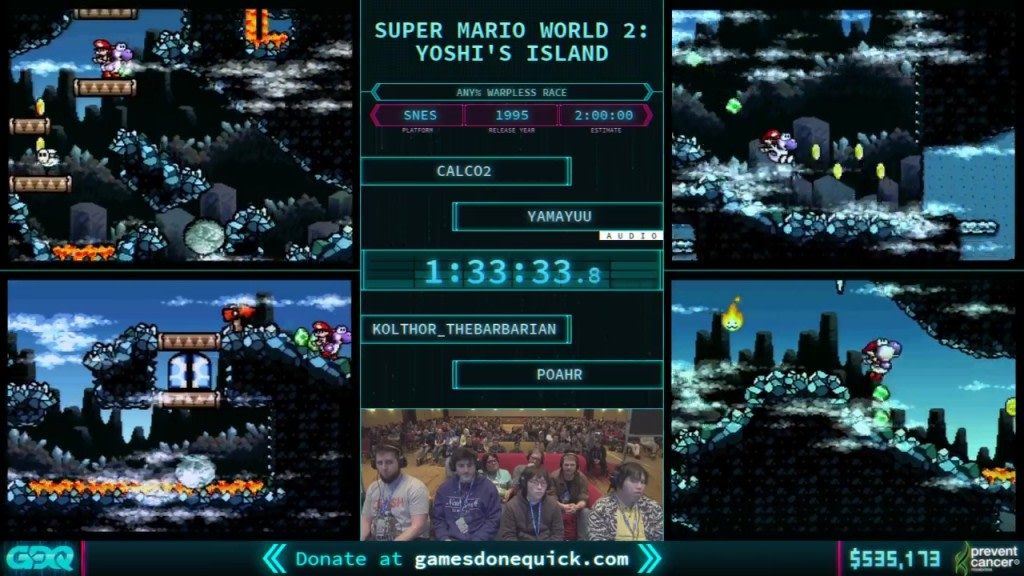 Yoshi’s Island is one of my favorite games to see at GDQ events.  Years ago, when I first started watching speedruns, I was much more picky about what I would tune into.  I caught the legendary speedrunner Trihex running Yoshi’s Island at one event, and have watched every run since.  On a mechanical level, Yoshi’s Island is one of the complex Mario games.  There’s an excess of movement techniques, frame perfect inputs, and egg-throwing accuracy needed to compete.  Putting four of the best Yoshi’s Island speedrunners together and having them compete in a lengthy warpless race was a great way to display the game. 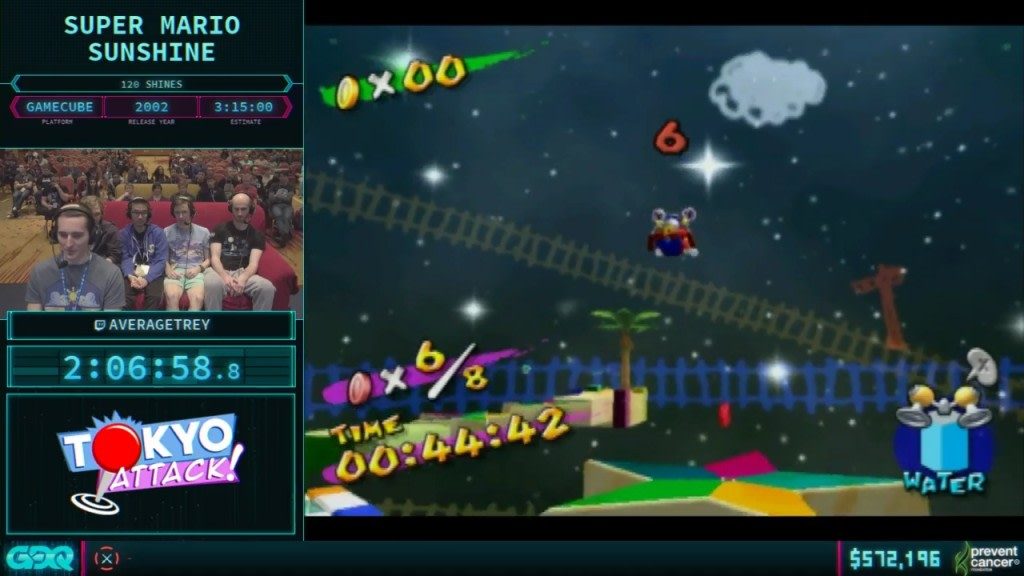 If you ask someone what their favorite 3D Mario title is, you’ll get a bunch of different responses.  Considered the black sheep of the 3D family of games, Super Mario Sunshine is all manners of quirky and weird.  It’s also the 3D Mario game I spent the most time with, next to Super Mario 64.  Having finished this game well over 6 times, I know just how grueling and tough some of the stages can be.  Watching runner AverageTrey skip and hop from platform to platform, making anxiety-inducing long jumps across large chasms, and jetpacking all over the place was a joyous experience.  A lengthy run lasting just over 3 hours, I was entertained every step of the way.

The runs listed above are only the beginning of what day four had to offer.  Since I’m not superhuman, I can’t watch all of the speedruns (that’d be seven days straight with no sleep), so even my “best of the day” list isn’t completely definitive (yet).  I highly recommend looking over this list of all the games played on day four, and check out any that sound interesting to you! 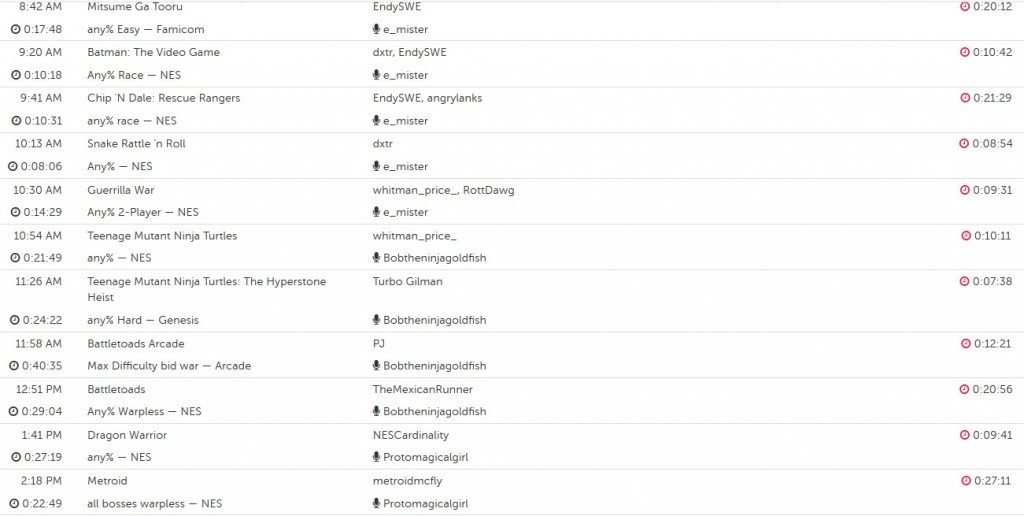 As always, AGDQ 2018 is performed with the hope of raising money towards the Prevent Cancer Foundation, a charity that helps fund research towards cancer prevention in the US.  At the end of day four, the entire marathon donation tally has risen to nearly $580,000.  It’s heartwarming to see the funds being raised with good intentions.

That’s all I got for you tonight!  Don’t forget to check back in as the weekend arrives, as the biggest games and runs have been reserved for Friday and Saturday! 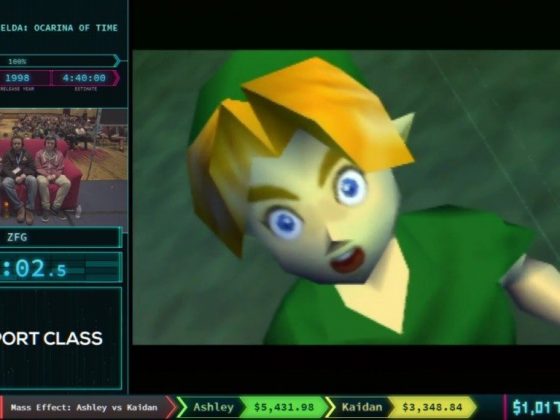 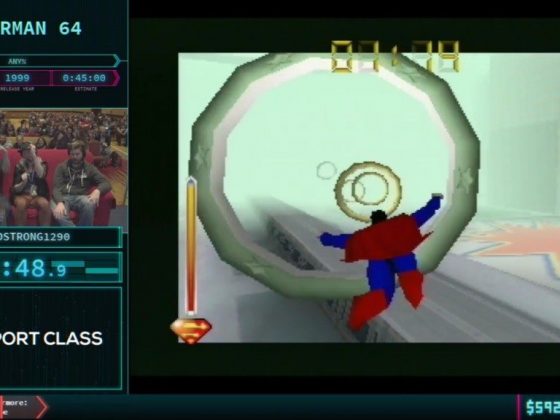 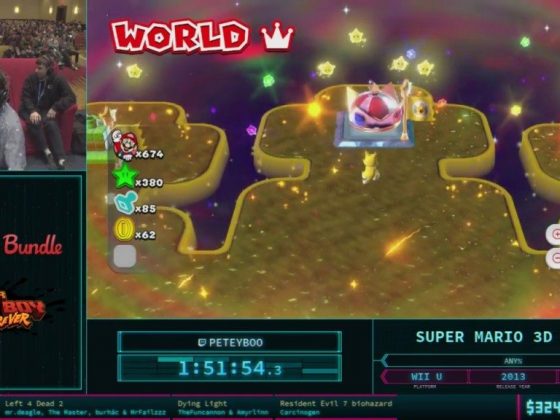 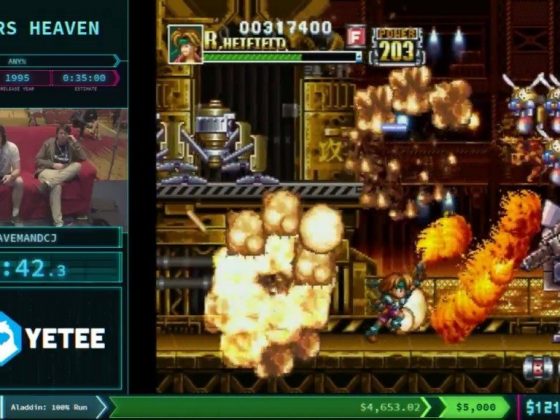