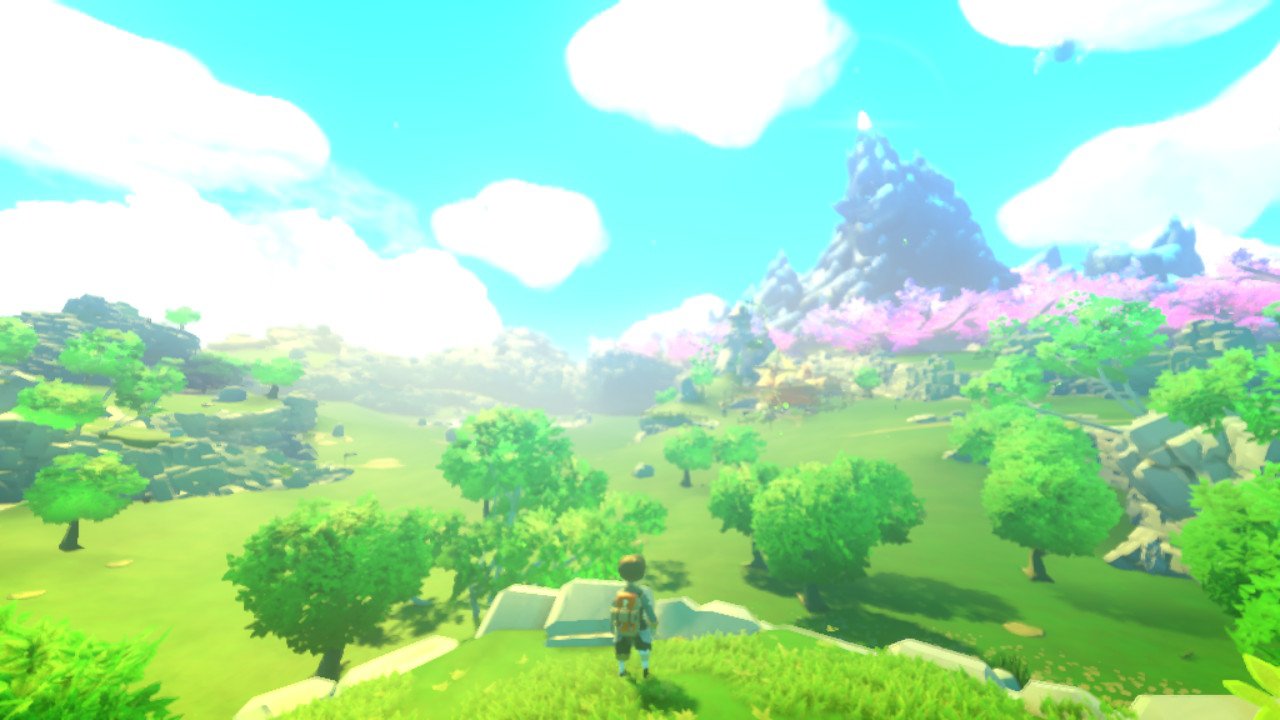 Yonder feels a lot like The Legend of Zelda: The Wind Waker, combined with elements from Harvest Moon and other “run your own farm” titles.  The game mixes exploration with resource collection, allowing you to freely explore its mostly untouched world at your own discretion.  As you find your place within the land’s inhabitants and wildlife, you’ll uncover colorful sprites that open up new paths, as well as new recipes for crafting.  The relaxed pace and complete absence of combat makes Yonder: The Cloud Catcher Chronicles a fun game to pick up and play on the Nintendo Switch, but a few problems keep it from reaching its true potential. 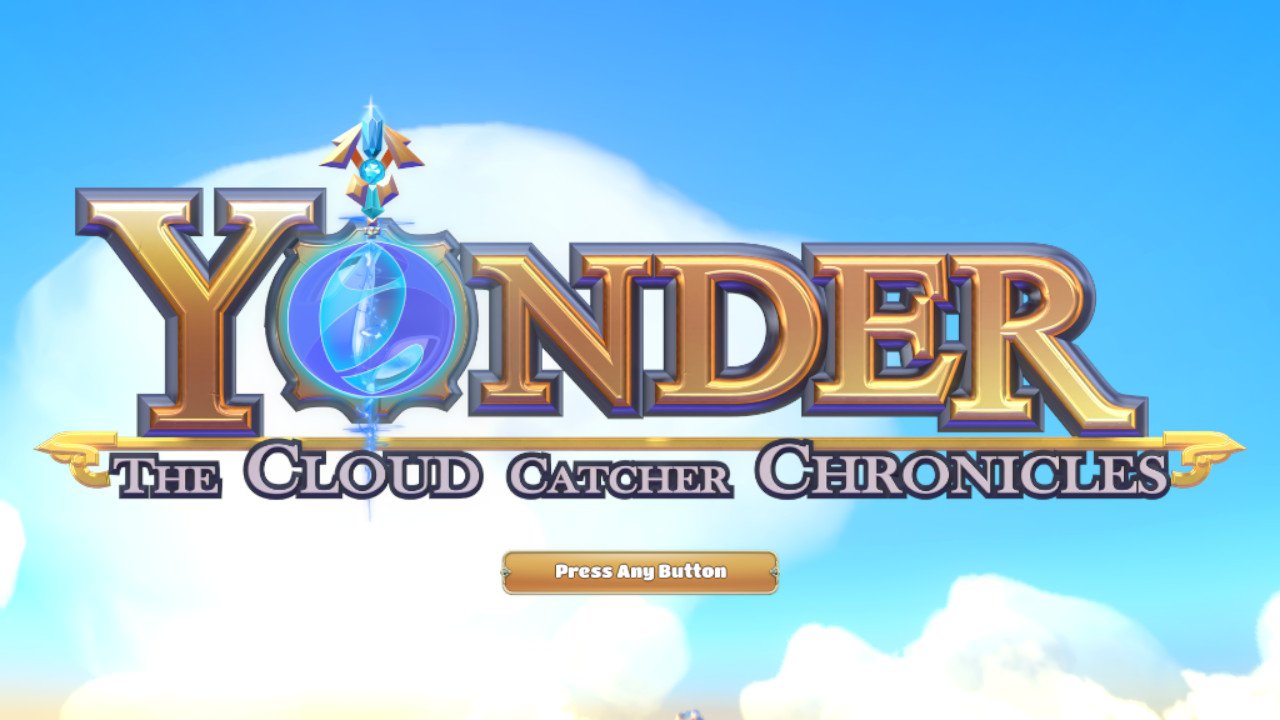 The story of Yonder is pretty light but sets the stage well enough.  You play as a custom character, arriving near the shores of the island Gemea.  When your ship takes a turn for the worse, you and your crew crash into the nearby shore.  You awaken sometime later, separated from your crew and completely lost.  After traveling to a nearby town, you learn more about the land of Gemea, namely the dark purple magic that has been popping up in different areas.  From there, you set out to find your crew, clean up the land of Gemea, and craft a whole lot of stuff along the way. 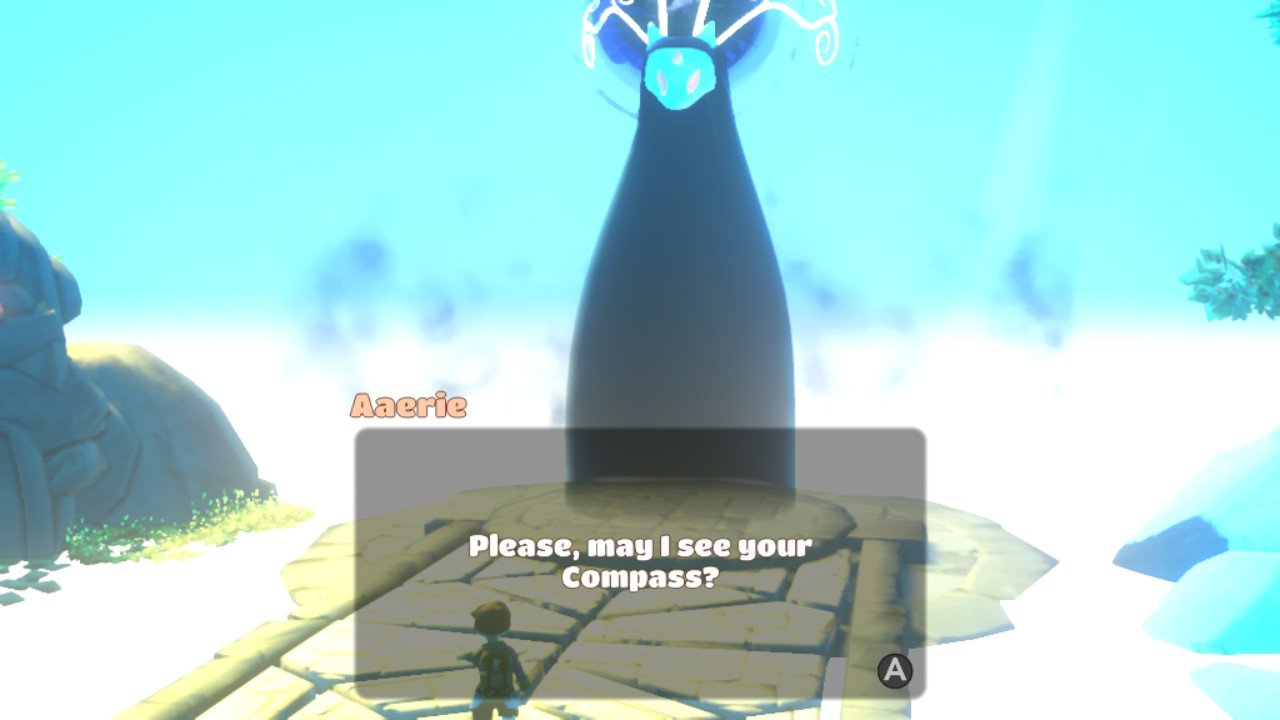 Although I was initially intrigued by the story, it quickly takes a backseat to the exploration rich gameplay.  For the most part, the narrative in Yonder purely exists as a reason to push you forward.  Besides the opening hour and closing hour of the game, I rarely pondered my character’s existence in this world, nor did I care much about it.  The game is full of a joyful and colorful attitude, and besides the purple mists that surround some blocked off areas, the complete lack of combat or enemies made for a relaxing experience.  I found that when I sat back and enjoyed the scenery, things were quite nice.  However, when Yonder attempts to flesh out its story with any tangible lore or plot points, it stumbles.

A mostly muted story feels undercut by an abrupt ending, and all told, I don’t feel like I accomplished much during my time in the game.  I definitely crafted a lot of things, talked to a bunch of characters, and completed plenty of quests.  Unfortunately, I didn’t feel like my existence within the world of Yonder made much of a difference.

The biggest difference between Yonder and any other exploration RPG is the complete lack of combat, weapons, or enemies.  This isn’t exactly a bad thing; Yonder boasts this fact in its marketing as well as the game itself.  This leaves adventurers to progress at a leisurely pace, freely completing quests and story beats as they see fit.  For the most part, you’ll travel around the map and find new towns.  Here, you’ll pick up quests from a variety of townsfolk, which you can complete for goods.

Scattered around the map are “masters of crafting”, and when you talk to each one, they’ll learn you the basics of their craft.  Eventually, you’re able to craft numerous items as a tailor, carpenter, chef, brewer, and more.  Most of these items are used in quests or placed in your own custom farms, usually leading to more items.  Since there’s no level progression or character power in the game, you don’t have any rare sets of armor or weapons to pursue, and I found myself generally uninterested in the crafting mechanic.  Thankfully, Yonder doesn’t shove the crafting aspect down your throat although, you’ll definitely have to craft some stuff to finish the game.  That being said, once I completed the game, I realized that I could’ve easily ignored the entire farming aspect of the game. 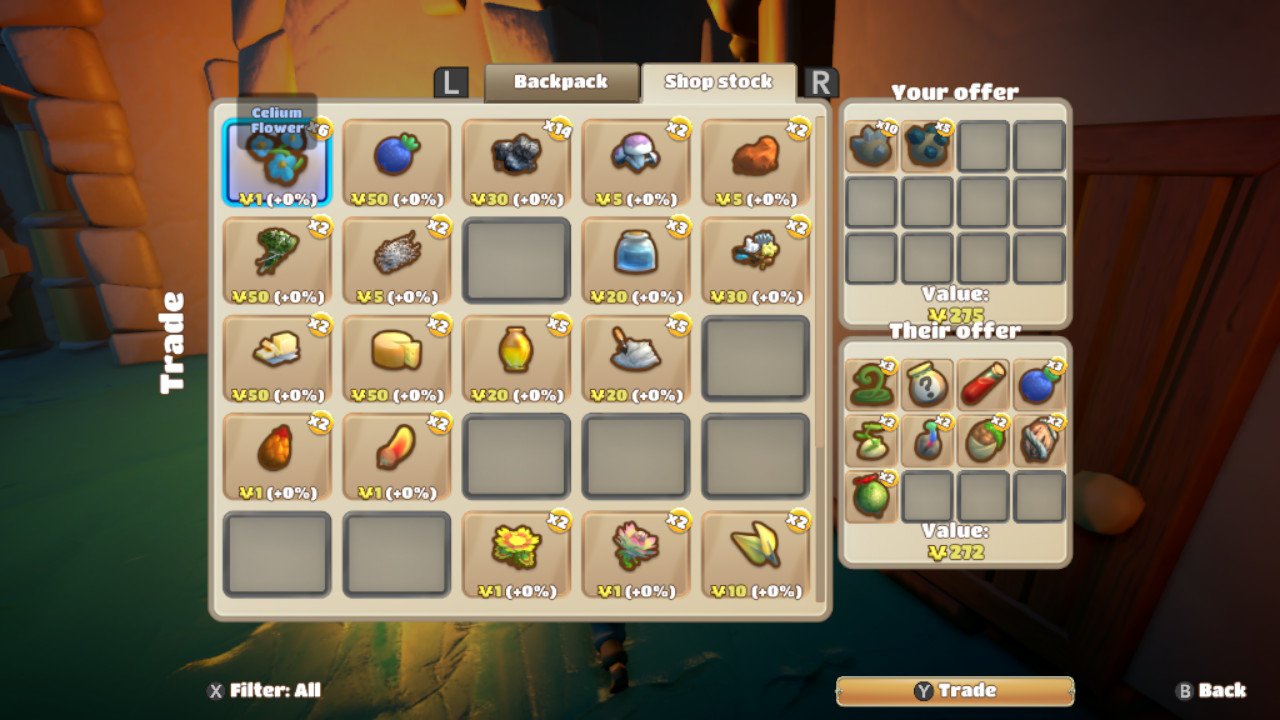 Besides building up your own personal farm, items are used to trade with merchants and townspeople alike.  This helps if you need a specific element to craft an item, complete a quest, or anything else.  Since I wasn’t exactly forced to trade with people, I quickly found my backpack filling up with useless stuff.  Collecting things in Yonder is actually quite cathartic; it’s fun to ping-pong back and forth on the map, chopping down trees and smashing rocks for resources.  As you gain the tools to interact with the environment, you’ll quickly find that Yonder is abundant with crafting material.  Unfortunately, I never found the use for half the items.

This is both a positive and a negative for Yonder.  For a game centered around crafting and building up your own farmland, Yonder doesn’t marry its ideas very well.  You can completely ignore main features of the game, and easily see the credits without putting forth much effort.  This is good for people who don’t like crafting, but if you don’t like crafting, you probably shouldn’t be playing Yonder.  Personally, I’m not a huge fan of crafting systems, but when a game is able to make it compelling and rewarding (see The Witcher 3), I’ll definitely put in the time.  Yonder‘s crafting and trade systems feel like an afterthought, which is disappointing because I know they aren’t.  Besides making some fun costume options for yourself, I struggled to find entertaining reasons to continue pursuing any of the craft lines.

The Beautiful World of Gemea

If anything, Yonder succeeds in the visuals department, with a fun and rounded art style that reminds me of The Legend of Zelda: The Wind Waker with a bit less polish.  Although you start out in a rather cliche area of rolling green hills, the world of Gemea soon opens up to reveal a large variety of environments.  In fact, the game feels like a miniature version of a Zelda title, complete with a volcano, ice area, desert, and more.  If you’re a fan of themed areas like I am, you’ll definitely find some fun exploring the entirety of the map.

There’s an excellent photo mode (which you can see the evidence of splattered across this review), and I enjoyed capturing some truly awesome vistas with my own touch.  Yonder does an excellent job giving you a tantalizing world that seems busting with life; it’s only as you dig into the nooks and crannies do you realize its mostly empty.  Despite this, I had a great time finding my way through the winding mountain paths, arid desert, and rolling hills.  The exploration aspect of Yonder paid off for me in an unexpected way, and I was consistently engaged with uncovering the next area of the map.  If you’ve got a curious mind and like seeing the sights, Yonder sets up a world that you will enjoy uncovering. 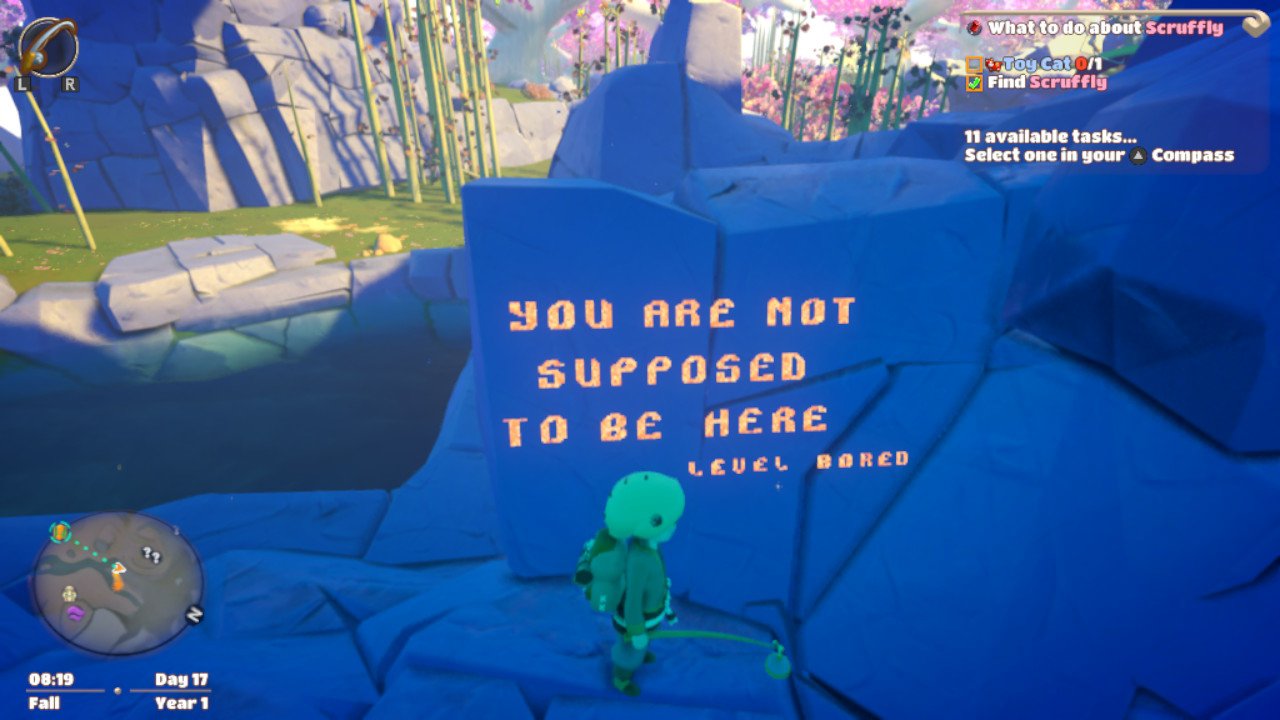 The Bottom Line on Yonder: The Cloud Catcher Chronicles

I went into Yonder with no expectations, only intrigued by its visuals and promise of adventure.  It definitely pays off with fun environments and a pleasing aesthetic, but the adventure within leaves quite a bit to be desired.  For those players who truly enjoy crafting and resource collection, Yonder will be an enjoyable time.  If you are expecting anything more, you should check your expectations at the door.  While I appreciated the passive experience that developer Prideful Sloth was going for, I feel like Yonder would’ve been a much better experience if there was something there to fill out the lack of combat.  As is, the resource collection, crafting, and farm customization all feel separate and uninviting and a lack of good tutorials can occasionally leave you guessing.

The bubbly and cute attitude of Yonder is commendable, as is the surprising amount of personality that seems hidden under the surface.  Whether it’s collecting over 50 cats for a worrisome cat-mother, or retrieving a missing pack of adorable cow-like creatures, Yonder has some fun and enjoyable content.  Unfortunately, most of your time will be spent idly strolling through the countryside, taking off in any direction that points to something interesting.  After perhaps a dozen or so hours of this, you’ll reach the credits, and that’s that.  Unless you’re grabbed by the very basic crafting system or the understated farm mechanic, Yonder: The Cloud Catcher Chronicles is a fun but ultimately disappointing time.