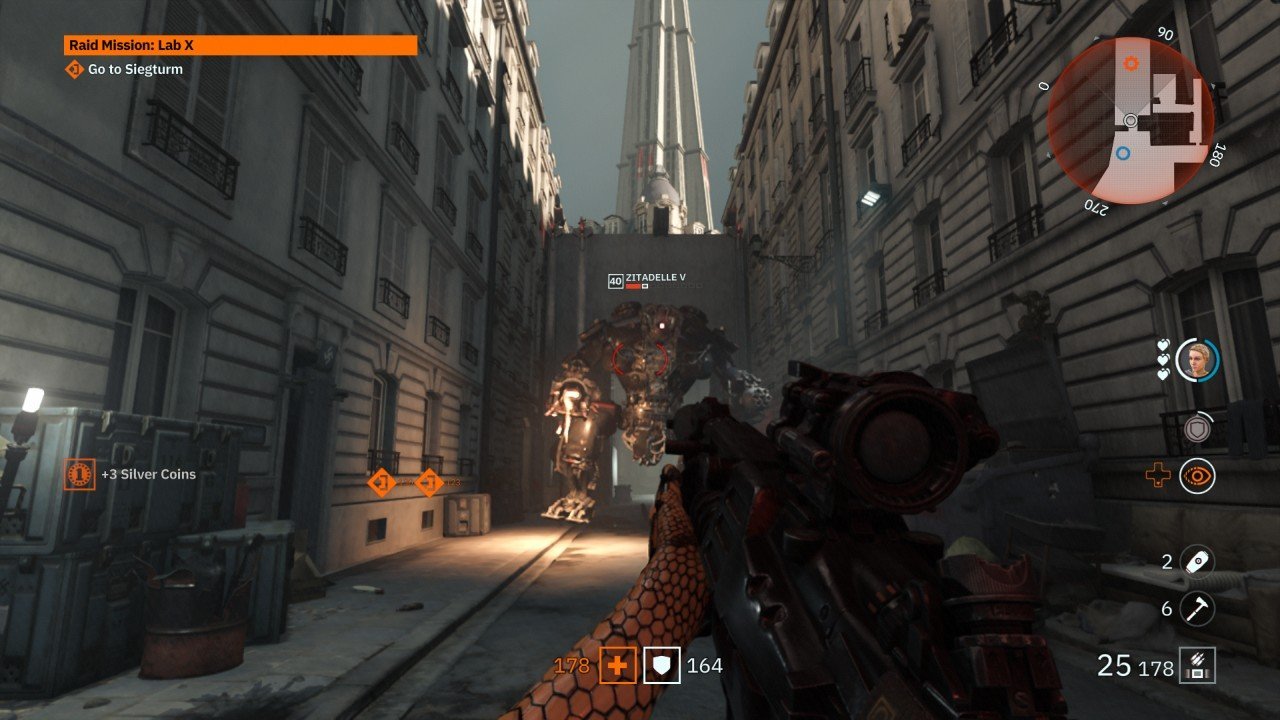 Wolfenstein: Youngblood is a first-person shooter that takes place almost two decades after Wolfenstein II: The New Colossus. In the Wolfenstein series, players get to take on the role of revolutionary warfighters, in an alternative history where the Nazis won World War II. In Youngblood, you play as the twin daughters of series’ protagonist, B.J Blazkowicz. Living in the now liberated remnants of a post-war United States, the twins are forced into action when their father goes missing. At a mid-tier price, does this Wolfenstein spin-off provide the same level of narrative quality and Nazi killing as its predecessors? Let’s see if this co-op focused FPS is worthy of the Wolfenstein title.

A Trip to Paris

Unlike the previous Wolfenstein games, Youngblood takes place in the ’80s, long after the most recent mainline Wolfenstein game (and perhaps even the upcoming third and final game in the numbered series). Most of the characters from those previous games pop up during the story, but Youngblood is true to its name, offering a mostly fresh cast of faces. Both sisters, Jess and Sophie, are well-equipped and trained in the arts of deadly combat. When their father disappears after a presumed trip to Nazi-occupied Paris, the pair of self-proclaimed “born to kill Nazis” sisters take matters into their own hands.

Overall, the story of Wolfenstein: Youngblood takes a back seat to its bombastic gameplay. Apart from a handful of cutscenes that break up major missions, the focus is usually on fast gameplay than a compelling story. The plot itself is very straightforward, containing a few predictable twists and turns. It’s a decent story that keeps things moving, but not one that I felt truly engaged in. This could have something to do with the lackluster character development and occasionally goofy voice acting, but I think that’s simply a piece of the puzzle. If you’re coming to Wolfenstein: Youngblood hoping for an intricate story with great character work and a riveting plot, you’ll be a bit disappointed. However, the story does its job decently well, keeping the motivations to kill Nazis fresh and persistent.

Despite its 1980’s time frame and cooperative gameplay focus, Wolfenstein: Youngblood still delivers the heart of the Wolfenstein brand; killing Nazis. Raging through the streets of Paris, you’ll blast your way through legions of Nazi scum, turning the streets red with a variety of futuristic tech. Equipped from the start with power-suits, you can double jump, use a cloaking device, and utilize other upgradable abilities. Although there are stealth options, combat encounters will most often end in a bang of chaotic gunfire, with you weaving in and out of enemies in a flurry of offense. The action is fast in Youngblood, and the mobility that the power-suit grants you is simply icing on the cake.

Although past Wolfenstein games have always been a power fantasy come true, Youngblood takes things even further. The game is always exceptionally arcade-like in feel, encouraging chaotic play with explosive results. You can quickly swap between all available weapons as you please by using the weapon wheel, and you’ll find even better weapons as you progress. As you defeat enemies, you’ll gain experience that works towards an overall player level. As you level up, you can use skill points to unlock new abilities or improve existing ones. Silver coins found in-game can also be spent to modify your weapons, allowing you to swap out a handful of magazines, sights, stocks, and more.

If the Nazi killing ever gets too tiresome, there are plenty of distractions to keep your eyes glued to the environment. Hidden throughout the expansive levels are a slew of collectibles, including 3-D glasses, cassette tapes, and fake movie boxes. There are also encrypted floppy discs to discover, and when decoded at a nearby computer terminal, will reveal plentiful caches of useful items. Back at the catacombs base, you can unwind with some target practice and the shooting range.

Like in Wolfenstein II: The New Colossus, there’s even an arcade machine that runs a modified version of the original Wolfenstein 3D game. Players can sit back and enjoy more than a dozen levels of classic first-person shooter action, which I had a great time completing. The abundance of collectibles and the entertaining distractions give a bit more replayability to Youngblood, and makes some of the eventual backtracking more forgivable.

Instead of playing out over linear story chapters, gameplay in Youngblood is a bit more open-ended. After a few introductory levels, you’ll be able to roam freely between the home base in the catacombs and a handful of locations around Paris using metro tunnel maps as fast travel points. You can pick up missions at the catacombs, which lead you to specific locations around Paris. Missions often entail killing a bunch of Nazis and retrieving some sort of item or rescuing a friendly character. The lack of a proper map makes levels a bit confusing to navigate at first, as the streets of Paris are full of winding alleys and buildings to inspect. There are also entrances to various underground tunnel systems, which are drenched in darkness and exceptionally deadly. While the more relaxed mission structure of Youngblood provides some laid-back fun, the side missions themselves can feel a bit repetitive.

Missions and enemies also have an accompanying level associated with them, so you’re not necessarily free to roam Paris without consequence. There are a few areas in particular, known as Brother towers, where high-level enemies and death awaits anyone who isn’t properly equipped. The inclusion of enemy levels and the structure of the missions makes Wolfenstein: Youngblood feel slightly like a looter-shooter without the loot. While playing coop online with a friend, the experience felt occasionally reminiscent of Destiny or The Division 2. Unfortunately, there’s also a fair bit of backtracking, as most missions will have you revisiting levels a few times over.

If it wasn’t evident from the twin-sister lead characters, Wolfenstein: Youngblood puts a heavy emphasis on cooperative play. While you can fight through the streets of Paris solo (accompanied by an AI-controlled partner), Youngblood is much more fun when tackled with a friend. Cooperative play is strictly an online affair, which is a bit disappointing. You won’t be able to play Youngblood in local couch coop, so you’ll have to link up with your pals online. If you don’t have any friends playing Youngblood, you can also match up with random players via public lobbies.

If you shell out the extra cash for the “deluxe” editions of Wolfenstein: Youngblood, you’ll gain access to the “Buddy Pass” feature. With the Buddy Pass, you can invite any of your friends with the Youngblood trial version into your game, essentially unlocking the full game for your pal. The number of friends you can invite with the Buddy Pass is unlimited, but you can only play with one person online at a time. It’s a cool feature with some caveats (friends can’t earn achievements if they’re playing through Buddy Pass), but an appropriate addition for such a cooperative heavy game.

Generally speaking, Wolfenstein: Youngblood was designed with cooperative play in mind. Most progression points require two players to advance, buffs and upgrades often benefit both players, and hordes of enemies often feel a bit excessive against one player. That said, there’s nothing incredibly unique or innovative about Youngblood‘s cooperative gameplay. You won’t find any tough environmental puzzles that require two minds, nor will you encounter combat that is impossible without a team. The more relaxed structure and hectic gameplay make it a great environment for wacky online antics, but at the cost of a more meandering narrative. When played solo, Youngblood can at times feel underwhelming and repetitive. These issues are smoothed over if you’re laughing with a friend, but it doesn’t remove them entirely.

Although the moment-to-moment gameplay in Youngblood is often quite fun and exciting, the game is not without its faults. There’s a lack of polish to the game, which might be explained away by its mid-tier price point. While the visuals are pretty good with all things considered, I couldn’t help but notice occasional graphical glitches as well as awkward enemy movement. While playing both offline and online, I also encountered a handful of audio glitches. While not annoying enough to ruin the experience, these cosmetic glitches bring the quality of gameplay down.

The other frustrating aspect of Wolfenstein: Youngblood is a painfully modern one; excessive cosmetic microtransactions. You can unlock a handful of weapons and character skins using the in-game silver coins you collect, but almost all of the cosmetics also require gold bars. Unless they are exceptionally well hidden in-game, golden bars can only be purchased with real currency. While the inclusion of paid cosmetics in itself is not super egregious, the fact that the overwhelming majority of cosmetic options are locked behind a paywall is. Unless you purchase the deluxe version of the game or plop down your real currency, your visual options will be severely limited. In this way, the extra costumes and weapon skins feel less like a feature and more like an embarrassing attempt to get you to spend a few more dollars.

The Bottom Line on Wolfenstein: Youngblood

Wolfenstein: Youngblood is a fun adventure that’s best undertaken with a friend. The story of Jess and Sophie Blazkowicz isn’t as effective as I hoped it would be and the gameplay remains exciting and cathartic. The introduction of looter-shooter mechanics such as character levels and open-ended map design brings both positives and negatives, but they gelled well with the cooperative gameplay. At a mid-tier price, Youngblood manages to provide explosive combat, environments packed with collectibles, and a surprising amount of replayability. Occasional audio and visual glitches hamper the experience, but not enough to impact the amount of joyful chaos you’ll have.

If you consider yourself a fan of the mainline Wolfenstein series, you’ll probably have a good time with Youngblood. Depending on the overall difficulty level you choose and the number of side missions you want to complete, you can wrap up Youngblood in around 6 – 10 hours. For those who want to stop and stomp more Nazis, there are at least 20 hours of content to dig into. While it won’t replace Wolfenstein: The Old Blood as the best Wolfenstein spin-off, Youngblood has plenty of its own brand of fun to enjoy.