Wolfenstein has been around for a long time.  It’s well known as the grandfather of first person shooters, paving the way for games like DOOM and Duke Nukem 3D.  More than 20 years after the original game, we’re still seeing the nazi killing adventure of protagonist BJ Blazkowicz in Wolfenstein II: The New Colossus.  Developed by MachineGames the game continues the story set in Wolfenstein: The New Order; a grim future of an America ruled by bigotry and hate.  Wolfenstein II: The New Colossus starts a revolution against all things nazi, and also attempts to tell a hard hitting story along the way.  Let’s see if BJ’s nazi killing can sustain another first person shooting adventure. 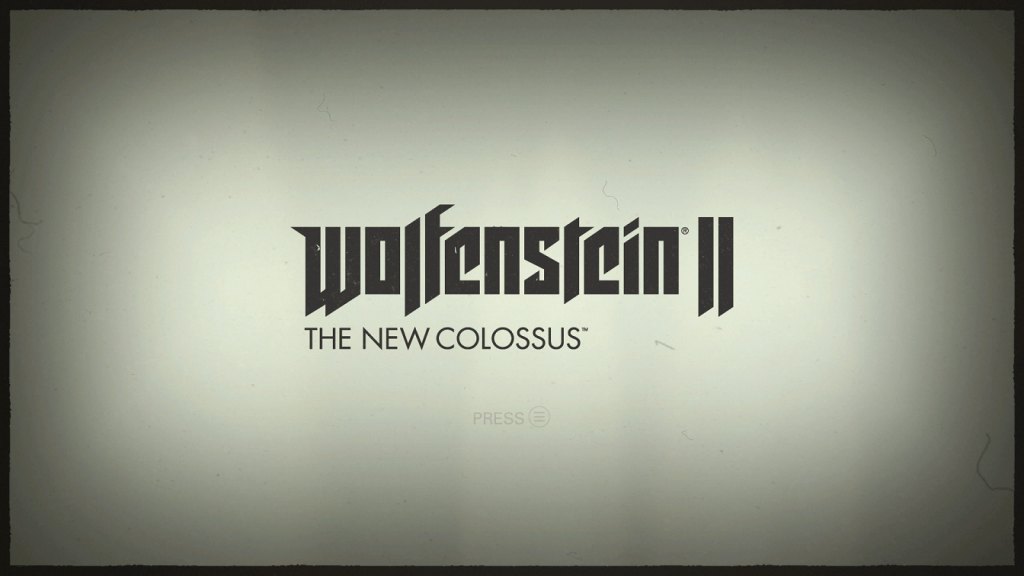 Wolfenstein II: The New Colossus starts with a brief recap of the The New Order‘s events, and then picks up directly where its predecessor left off.  We last saw our protagonist William J Blazkowicz bleeding and broken, directly in the path of a bombing attack on a nazi base.  Luckily, BJ is saved in the nick of time by his compatriots, and they continue their plans for revolution.  More so than before, Wolfenstein puts its characters in the forefront, emphasizing their personal struggles.  This rings truest for BJ himself, as The New Colossus dives into his childhood and upbringing, and shows players the horrors that shaped the man we’ve known for decades. 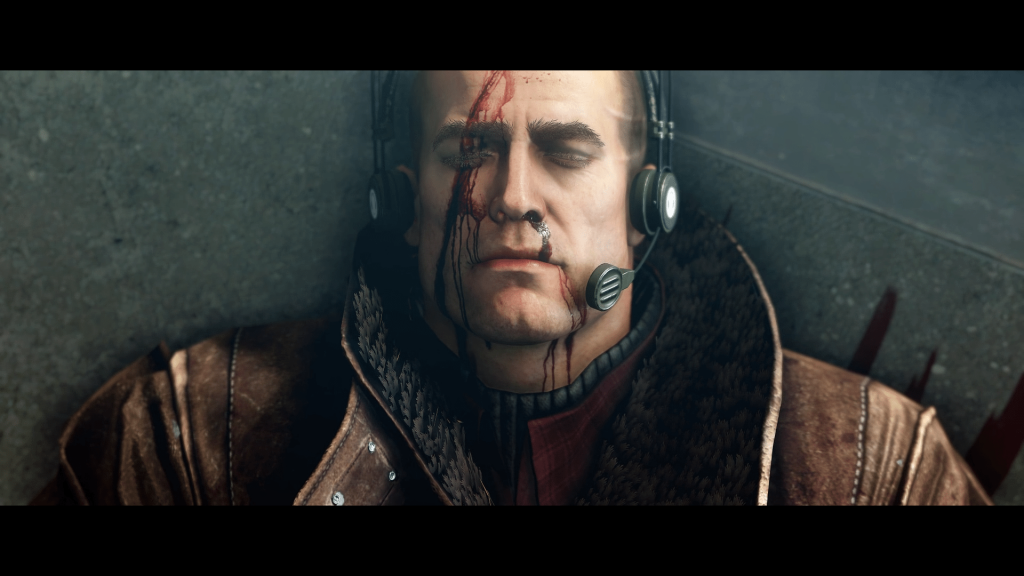 Because of the inherent nature of a story about nazi tyranny, Wolfenstein II deals with some very heavy topics.  Things like racism, xenophobia, and overall pure hatred and bigotry are on display.  This means that the game contains plenty of unsavory dialogue, but manages to handle it in an appropriate way.  Unlike the gratuitous violence against nazi scum, Wolfenstein handles its darker topics with a noticeable care and thoughtfulness.  It never tries to exploit tragedy or glorify suffering, but rather tell a harrowing cautionary tale by not shying away from it.  That being said, Wolfenstein II goes to some insanely twisted places overall, and it does not hold back when depicting violence or gore.  Some scenes are unsettling in a way that even most modern horror games fail to achieve.  Wolfenstein‘s narrative made me feel utterly disgusted but rightfully so.  The game will make you hate the villains with a passion, empathize with the most unlikely of characters, and draw significant emotion.  For a first person shooter about killing as many nazis as possible, that’s an achievement. 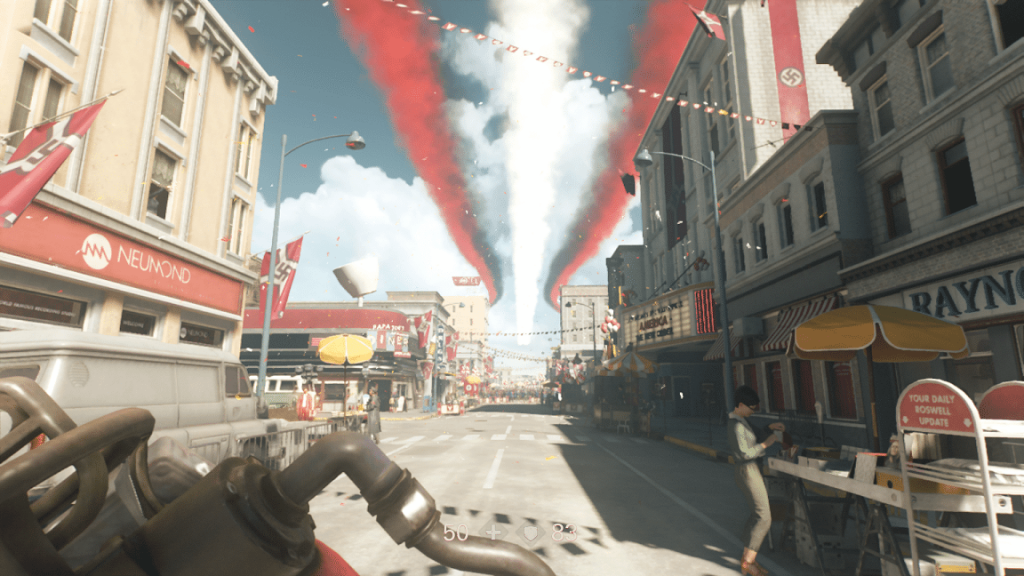 Laying Down the Axe

When BJ first picks up a fire axe in the game, he studies it.  “Lots of things you can do with an axe.”  He trails off in thought.  “… and a nazi.”

This line of dialogue echoes the tone and sentiment of Wolfenstein II‘s combat to its core.  Yes, there’s many things you can do with a sharpened blade and unforgivable soul, and the game revels in letting you decide which of those things you want to do.  At its core, Wolfenstein II is a fast paced first person shooter, similar to 2016’s DOOM.  For those unfamiliar, imagine sprinting from one end of a room to the other in 3 seconds.  Now imagine duel wielding shotguns while you mow through nazi scum, their entrails flying into the air as you speed past their exploding bodies.  All with a big smile and a wink, Wolfenstein II delivers satisfying nazi slaughter, in glorious violent detail.  There is a big contrast between the tone of the story being told and the actual gameplay, but Wolfenstein II does a good job explaining that disconnect. 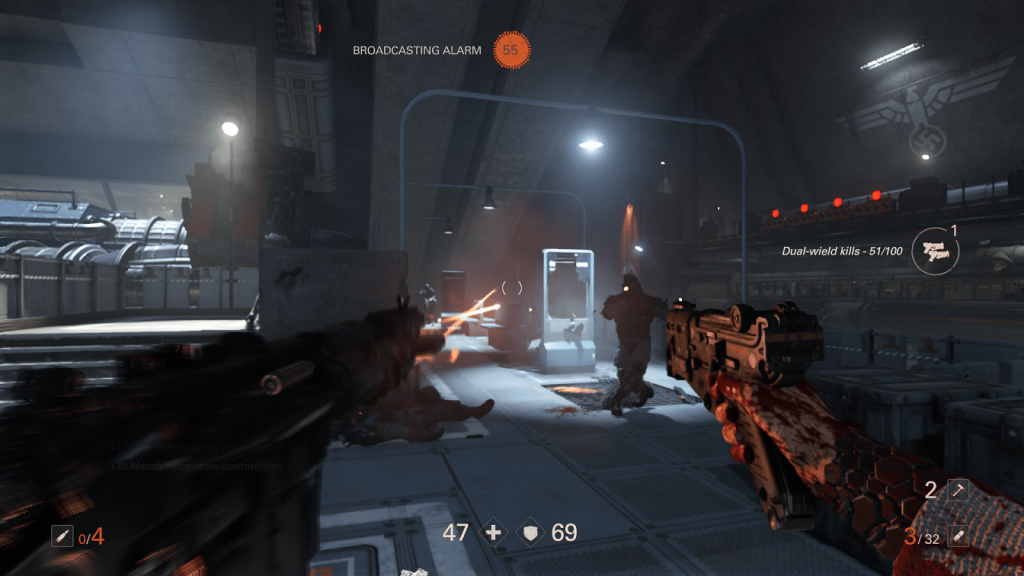 You’ll take on missions in a pretty linear fashion, although the game does have side quests, collectibles, and numerous end game content to pursue.  The missions and set pieces and crafted very well, but the core concept rarely wavers.  Kill nazis… a lot of nazis.  Where Wolfenstein II succeeds is in player choice, and rewarding the player regardless of how they want to play.  Despite being built around fast paced shooting action, the game contains a decent amount of stealth mechanics, and a variety of gun options.  The built-in “Perk” system rewards you for playing how you like, so you’ll never feel under powered for choosing a certain play style.  For example, killing enemies while in stealth eventually leads to faster crouching movement speed.  Conversely, duel wielding kills give you extra ammo capacity.

In addition to player choice, the arsenal in Wolfenstein II is varied and well worth exploring.  As you find new guns, you add them to a weapon wheel, so you won’t have to worry about limited gun selection.  Deciding whether to use a machine gun, shotgun, grenade launcher, or heavy weapon all have their positives and negatives.  As you play, you’ll organically find a flow that you enjoy.  Perhaps you favor duel wielding pistols, or just committing overkill with the laser beam cannon.  Figuring out your favorite weapon is an enjoyable experience, as is upgrading those weapons with upgrade parts you find during your journey.  Other collectibles and readable items litter the environment, encouraging you to slow down and investigate your surroundings. 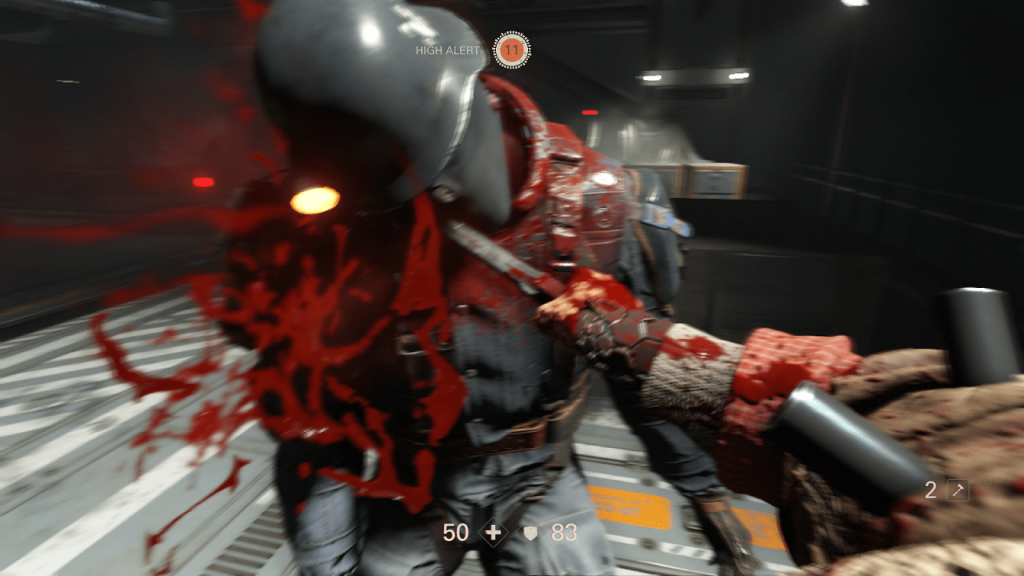 Wolfenstein II is visually and audibly impressive not only in quality, but in performance.  I was surprised not only by the great looking environments and lighting effects, but the speed and consistency at which they were displayed.  On console, the game runs around 60FPS, and while I did see a few noticeable dips, the game rarely struggles to chugs.  This is important for quick paced action, and the lack of stutter does wonders for keeping you in the flow of the game.  You’ll spend a lot of time moving quickly, but the world isn’t designed to be sped through.  The game looks very good in motion, but also exceeds upon closer detail.  I will admit that some textures lack polish upon closer inspection, but Wolfenstein II is one of the best looking games of the generation by far.  There are a lot of subtle details that go a long way in making the game look and feel natural.  MachineGames proves that they have a grip on the first person shooter experience, and exactly what it takes to flourish visually in that genre. 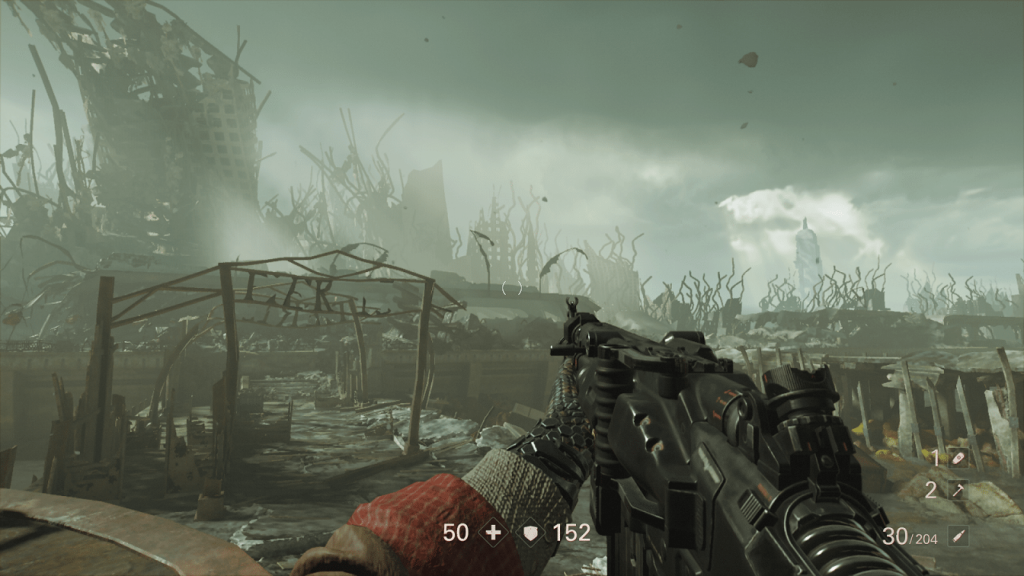 The audio design is equally impressive, especially in regards to gun effects and voice work.  The guns sound just as varied as they feel, ranging from hearty shotgun blasts to dubstep-like boomings of the laser weapons.  The distinct sound of each gun also helps during combat, making it easier to identify threats while on the move.  The gunplay is usually accompanied by a soundtrack of mean guitar riffs and rocking metal, making the action that much more exciting.  On the other side of the audio spectrum, voice work is nearly flawless.  All the main and secondary characters are performed with passion and hear, with only a few lines coming off awkward or too machismo.  Most notably though, is Brian Bloom’s performance as William J Blazkowicz.  His low grumble and inwardly reflecting narration does wonders for the story.  There are countless quotable lines, and for a character who spends a majority of his time bashing in nazi brains, BJ is an complex individual, one whom Brian Bloom inhabits perfectly.

The Bottom Line on Wolfenstein II: The New Colossus

Wolfenstein II: The New Colossus sets a new bar for narrative in first person shooters.  It refines the gameplay experience of the first game into an organically rewarding system for players of all types, and tells an emotionally gripping story a long the way.  It will awe you with its visuals, entrance you with its narrative, and excite you with its combat.  Don’t get the message confused though, parts of Wolfenstein II are downright unpleasant.  This is intentional, but worth noting.  The game isn’t for the squeamish, nor for those who are emotionally sensitive to heavier topics.

However, the game balances the almost joyful slaughter of nameless nazis with heart wrenching drama for well over 10 hours, and only stumbles a few times.  Much like any other first person shooter, it occasionally suffers from pacing issues and slight repetition, mainly in level design.  However, the excellence of the overall package makes it easy to overlook the issues.  Wolfenstein II: The New Colossus is definitely worth your time, and MachineGames once again prove that they are a commanding force in the FPS genre.