Two Point Studios launched the second piece of DLC for their hit game Two Point Hospital on the 18th of March, building on the solid success of their first DLC Bigfoot. Pebberley Island was released on Steam for Mac and Windows computers, pricing at £6.99 GBP or $8.99 USD, although if you pre-ordered on Steam you could get a nifty 10% off. Pebberley Island is almost the stark contrast of Bigfoot, sporting a fancy new tropical theme and a brand new island with three hospitals to progress through. There’s a brief bit of story if you play through the hospitals and scenarios, but Pebberley Island plays basically the same way as the base game.

There are a handful of new hospitals to play through, all of which have a tropical island theme to them. If you’re itching for the good weather to start again, then Pebberley Island might be just the escapism you are looking for. Each hospital has its own theme, including the extremely unfortunate extreme weather hub that is Pebberley Reef, the untamed and unexplored jungle themed Overgrowth, and finally the mountainous themed Topless Mountain. The last of the hospitals to unlock introduces Horde Mode. Just like the name suggests, this hospital tasks players with diagnosing and curing wave after wave of sick vacationers. There are also some new items to unlock using your leftover kudos which are all appropriately island themed. 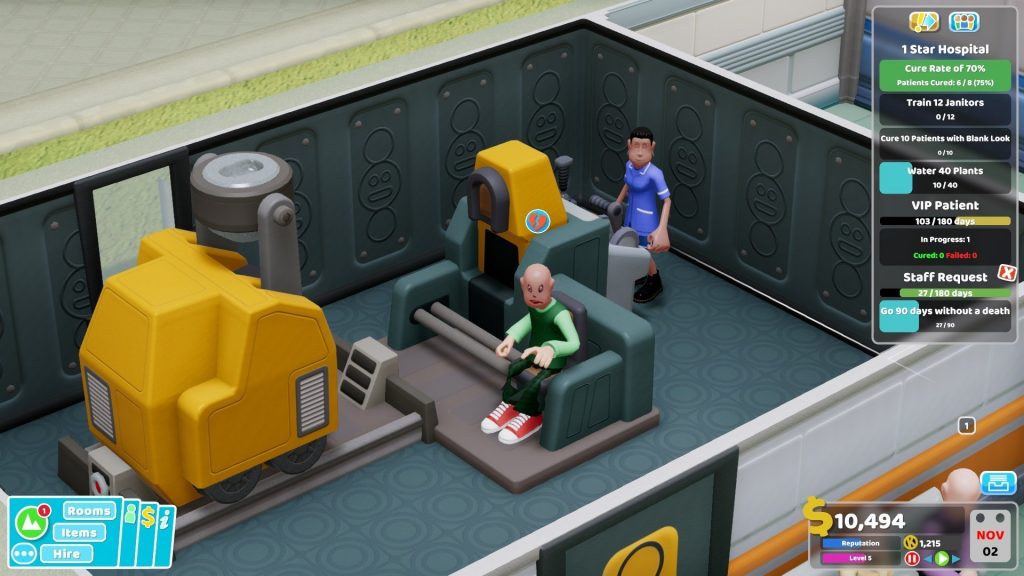 What would Two Point Hospital be without crazy illnesses? Pebberley Island introduces a whopping 34 new illnesses to treat, some of which require one of the three new sick rooms you can unlock, while the others build on existing treatment rooms like the Ward or Psychiatry. 10 of these new illnesses are what the developers have called “visual illnesses,” meaning they have 10 new animations all of which are as ridiculous as you’d come to expect from Two Point Studios at this point. The new illnesses, particularly the new visual ones, provide a wacky new way to shake up your gameplay. My personal favourite is the new “Blank Look,” which causes the face of the patient to be totally blank and requires your nurses to coax it back with some “hydraulic machinery,” or they will just draw on a face with what looks like crayon if they fail.

Pebberley Island adds a refreshing new area for players to build up their medical empire and conquer the new ridiculous illnesses that the area brings. Each hospital is wonderfully themed, and it’s nice to see a bit of variety considering there are only three new hospitals. What the DLC lacks in new hospitals, however, it makes up with a whole load of fresh diseases to cure and a brand new mode which is both challenging and fun. If you liked the first DLC Bigfoot, then you’re sure to appreciate Pebberley Island as well. If you’ve conquered the main game and are tired with sandbox mode which was added at the end of last year, then Pebberley Island could be just the vacation you need.