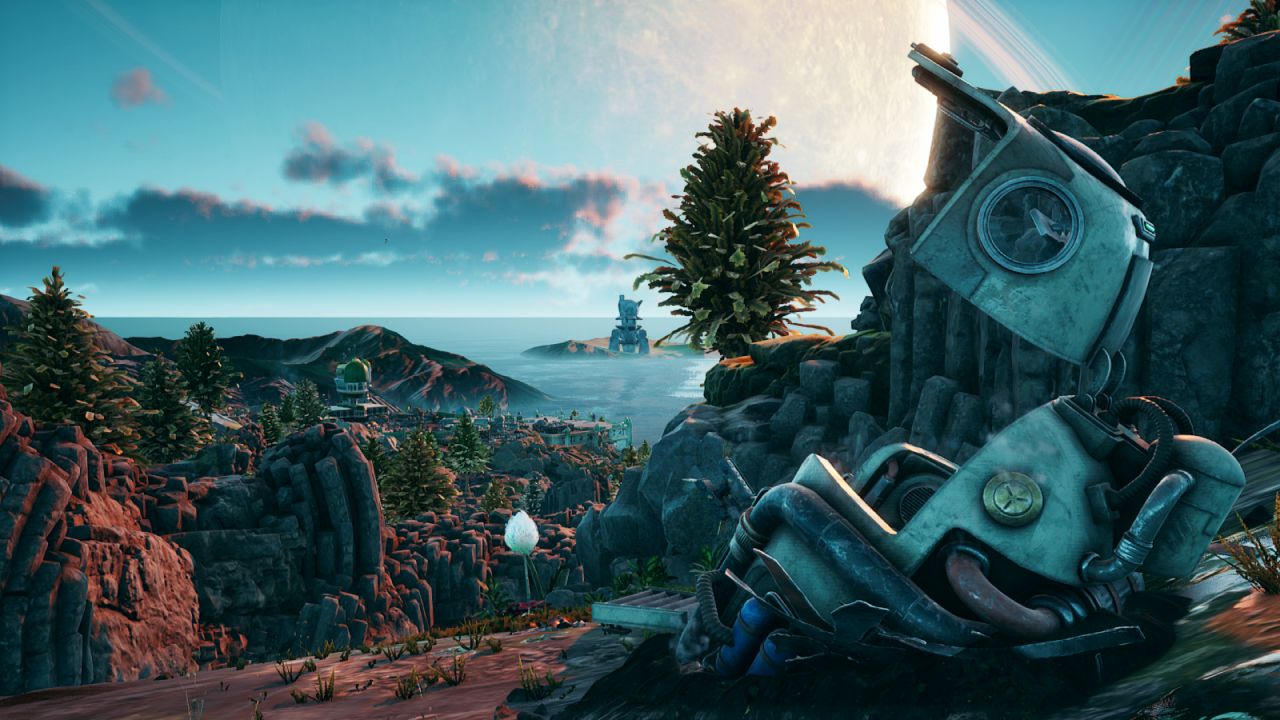 The Outer Worlds is an RPG from Obsidian Games, developers of Fallout: New Vegas, South Park: Stick of Truth, and other widely-popular RPG games. In this space-based adventure, players take on the role of a fresh-faced protagonist in a bustling colony of cosmic quests. Exploring the colony of Halcyon, you’ll meet tons of characters and come to learn the woes of each world. In true Obsidian fashion, players are given many options on how to proceed; whether with violence, charm, or outside-the-box thinking. That said, does The Outer Worlds manage to separate itself from Obsidian’s past works as a new IP, or is this a lackluster RPG that’s stuck in decade-old game design? Let’s find out if Obsidian’s new space adventure is the RPG epic that many fans are hoping for.

In The Outer Worlds, you play as a space colonist who is recently awoken after being in cryo-sleep for over 70 years. After being woken up by a fugitive scientist named Phinneas, you are sent to the surface of a planet called Terra 2 in search of some resources. Before long, you find yourself as the captain of a small but capable ship, exploring the many planets of the Halcyon space colony. As a new player in this futuristic world, you have full control over how your journey will play out. Like other RPGs made by Obsidian Games, you are given a decent level of freedom in how your character acts within the story. You can be a merciless villain, a hero with a compassionate heart, or a shadowy figure that plays both sides. There are many tasks to complete, but not all require violence.

Throughout your adventure, you’ll act as a cosmic mercenary for hire. Hopping from planet to planet, you’ll do your best to solve local problems as the bigger threat emerges. Each planet is home to many characters, each with their own quirks and needs. You’ll spend a lot of time getting to know the various citizens of colonies and helping them with their woes (usually for the right price). Your adventure often brings big moral choices, where there’s no easy answer. Dialogue plays a big role in the game, so most players will want to focus on their chatter skills when upgrading. Luckily, the majority of the writing is great. Characters are personable and often pretty funny, and the accompanying voice-acting is of good quality.

Some characters will join your adventure as a companion, offering back-up during combat. These companion characters can also be leveled up and equipped with various weapons, balancing out your strategy. Alternatively, you can choose to forge your path alone, leaving companions to their own devices. Each time you leave your ship, you can choose to take up to two companions with you. As you spend more time with any given character, they’ll begin to open up and become more friendly. Each companion also an associated quest to complete, furthering your bond and cementing them as a member of your crew.

As you complete quests and defeat enemies, you’ll earn experience towards your overall player level. Leveling up grants you a handful of skill points to increase core attributes, allowing you to further shape your playstyle. You can increase your skill in: melee, ranged, defense, dialog, stealth, tech, and leadership. Each attribute bolsters your stats, providing bonuses in and out of combat. The leveling system in Outer Worlds feels more in-depth than that of Fallout, encouraging players to anticipate their play-style and level themselves accordingly. I found myself favoring dialog and gun proficiency, ensuring that if I couldn’t talk myself out of a situation, I could sure as hell shoot my way out of it.

You’ll also earn perk points every other level, which can be used to unlock unique abilities or stat boosts. These range from bonuses like increased health and damage to more situational abilities like fast travel availability. If you’ve played a Fallout game before, the perk system and various leveling options will feel familiar and easy to navigate. For RPG newcomers, things might feel a bit overwhelming in the beginning, but will become second nature before long.

Life on the cosmic frontier is unsurprisingly dangerous, with all manners of foe trying to impede your progress. Whether human or alien, you can usually dispatch them with an assortment of melee and ranged weapons. Smooth-talking will only get you so far, and sometimes gunfire is the only acceptable language. Combat can be difficult if you’re not properly equipped, so you’ll want to loot fallen enemies and your surroundings for consumable goods, ammo, and new gear. There are a plethora of weapons and items to be found in the environment, so it pays to take your time and search through your surroundings.

Generally speaking, the gameplay feels strikingly similar to Fallout: New Vegas, one of Obsidian’s previous games. If you’ve played any of the modern Fallout games, you’ll have a good idea of what to expect. For those unfamiliar with the Fallout style of gameplay, it’s essentially a role-playing game with a first-person shooter disguise on. Weapons have stat ratings, gear has to maintained and repaired, and you’ll often talk first and shoot second. There’s a fair share of gunplay involved, but the overall experience is far more nuanced than your typical run and gun FPS. This provides a nice combination of narrative and gameplay, with neither overshadowing the other.

That said, the world itself isn’t as expansive as any of the Fallout games, making the experience a bit more intimate. Unfortunately, this intimacy at the price of discovery, as exploration in Outer Worlds feels more straightforward and less about going off the beaten path. Apart from searching a random building every so often, my experience through Outer Worlds felt well-guided. For as much freedom as the game give you in how you complete quests, it doesn’t do as good of a job in freedom of exploration. Although the game offers several different celestial bodies to land on and explore, there’s often a pretty distinguishable line of quests to follow. Whereas other RPGs encourage players to run off in any direction and seek out adventure, The Outer Worlds plays better when you stick to the expected path.

Time is an Illusion

Due to your extended years of cryo-sleep, time has a funny way of working around you. In fact, you can slow down time at will, using the Tactical Time Dilation mechanic. This is an incredibly helpful ability in combat, especially when fights require more strategy than spray and pray. The enemy AI is varied and intelligent, so you’ll have to take cover and keep an eye on your flanks at all times.

From the outset of the game, The Outer Worlds tries to make it apparent that your actions and decisions have consequences. The Halcyon Colony is full of various factions, and it’s hard to please all of them. Some quests will force you to make choices, and your decision often affects your reputation with various factions around Halcyon. If you have a positive reputation with a faction, they’ll be more welcoming to you by offering perks like discounts at affiliated merchants. A negative reputation can really squander things, with faction members becoming hostile and attempting to kill you on sight.

On one hand, the reputation system provides ample consequences for your actions. You can’t just go around killing everyone and get off scot-free. It’s also a nice way to earn bonuses from factions you like the most. However, it can also impact questing and gameplay in some unsavory ways. Towards the end of the game, I had amassed a negative reputation with a specific faction, causing them to immediately shoot at me whenever possible. Unfortunately, both the main quest and all of my side quests were located in a specific area that was controlled by the same faction. Unable to progress with any of my side quests because characters were intent on killing me, I had to rush through the main quest with guns blazing. Unless I wanted to kill an entire city of people, I had no option but to speed through the area without stopping to appreciate it.

Generally speaking, I appreciated that my choices mattered in The Outer Worlds. My actions were noticed, both on a small and large scale. There are a lot of games that present “big choices with far-reaching consequences”, but those choices are usually negligible or all lead to the same conclusion. In The Outer Worlds, I was constantly reminded of my choices and the result of them. This isn’t always a good thing, as the reputation system can present some gameplay interruptions, but it made my adventure feel more personal and self-directed.

The Bottom Line on The Outer Worlds

The Outer Worlds managed to both impress me and annoy me, but the experience felt worthwhile. It’s a game that respects your play-style and offers plenty of choices, both in combat and weaving the narrative. While the world isn’t as large and dense with content as I would’ve hoped, there’s still plenty of variety that kept me playing. Every quest is well-written and feels important, no matter how small. The lack of discovery and exploration is balanced by the quality of the story and characters, resulting in a more intimate experience with a smaller scope.

Overall, The Outer Worlds is a satisfying and interesting RPG and should appeal to fans of Obsidian’s previous games or the genre in general. Although a few of its mechanics are under-baked or occasionally faulty, the majority of the experience is exciting and packed with personality. If you take your time and try to complete most quests, The Outer Worlds will provide around 30 hours of space-questing. In my opinion, it’s 30 hours well spent.