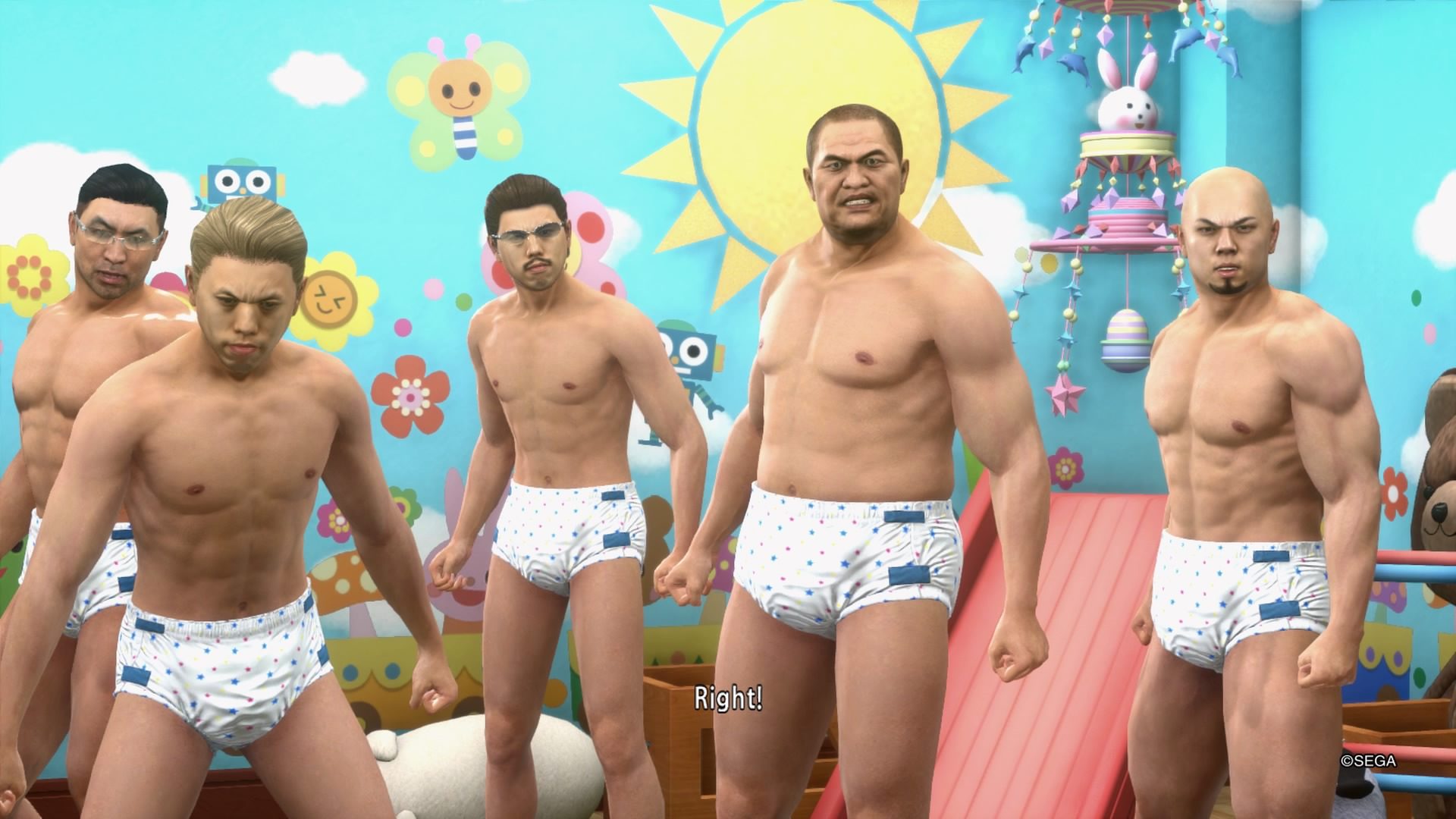 The Best, Weirdest, and Oddly Sexual Side Quests in Yakuza Kiwami 2

When it come to the Yakuza franchise, I’ve played quite a few of them in the past two years.  Although the main stories told in this franchise are often quite good, the best narrative content is usually found in the side quests.  Although the main stories in Yakuza veer into weird territory without fail, its in the “sub-stories” where the game really lets loose.  Some sub-stories are as simple as helping a person in need, whereas others require long series of requests and activity.  Regardless of the gameplay, the sub-stories in Yakuza Kiwami 2 are some of the weirdest quirkiest, and downright Japanese tales I’ve ever witnessed.

Honestly, I think the sub-stories are the best part of any Yakuza game, and they should be recognized.  Sure, they’re weird.  But to not acknowledge their hilarity, unique qualities, or overall silliness would be a shame.  With that said, here are my picks for the best sub-stories Yakuza Kiwami 2 has to offer.

Note:  These sub-stories are found throughout the entire game, and therefore you should consider this spoiler territory.  While nothing from the main narrative of the game will be spoiled, you might want to experience some of these side quests firsthand.  If you’re currently playing Yakuza Kiwami 2, you might want to finish it up and come back to read this list later.

The Best, Weirdest, and Oddly Sexual Side Quests in Yakuza Kiwami 2

In the Name of Art 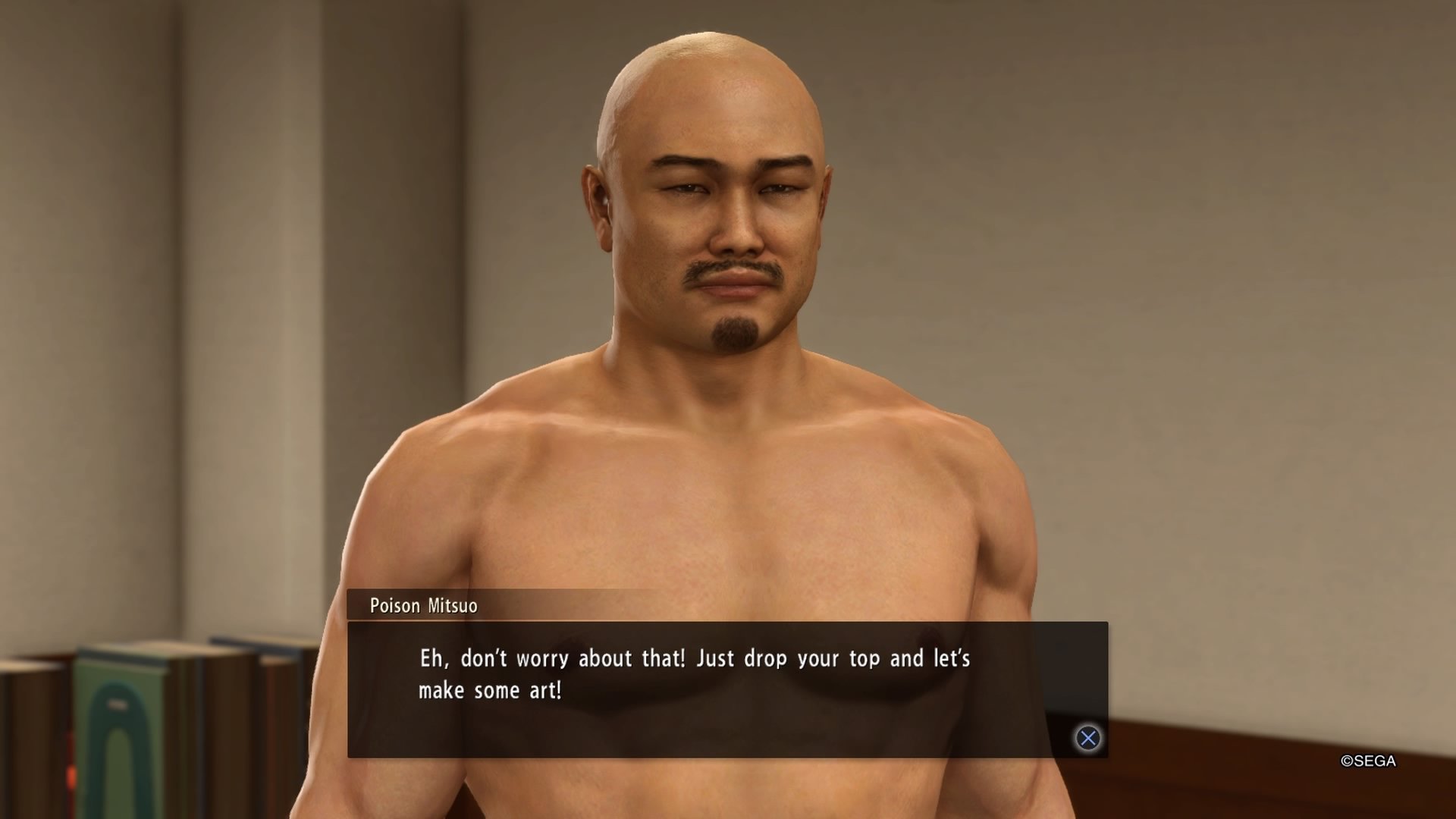 In this brief side quest, Kiryu is approached on the street and asked to be a model.  With nothing to lose, he heads inside and quickly realizes he has bitten off more than he can chew.  As the photographers egg Kiryu on to remove his shirt, he decides to just go for it. 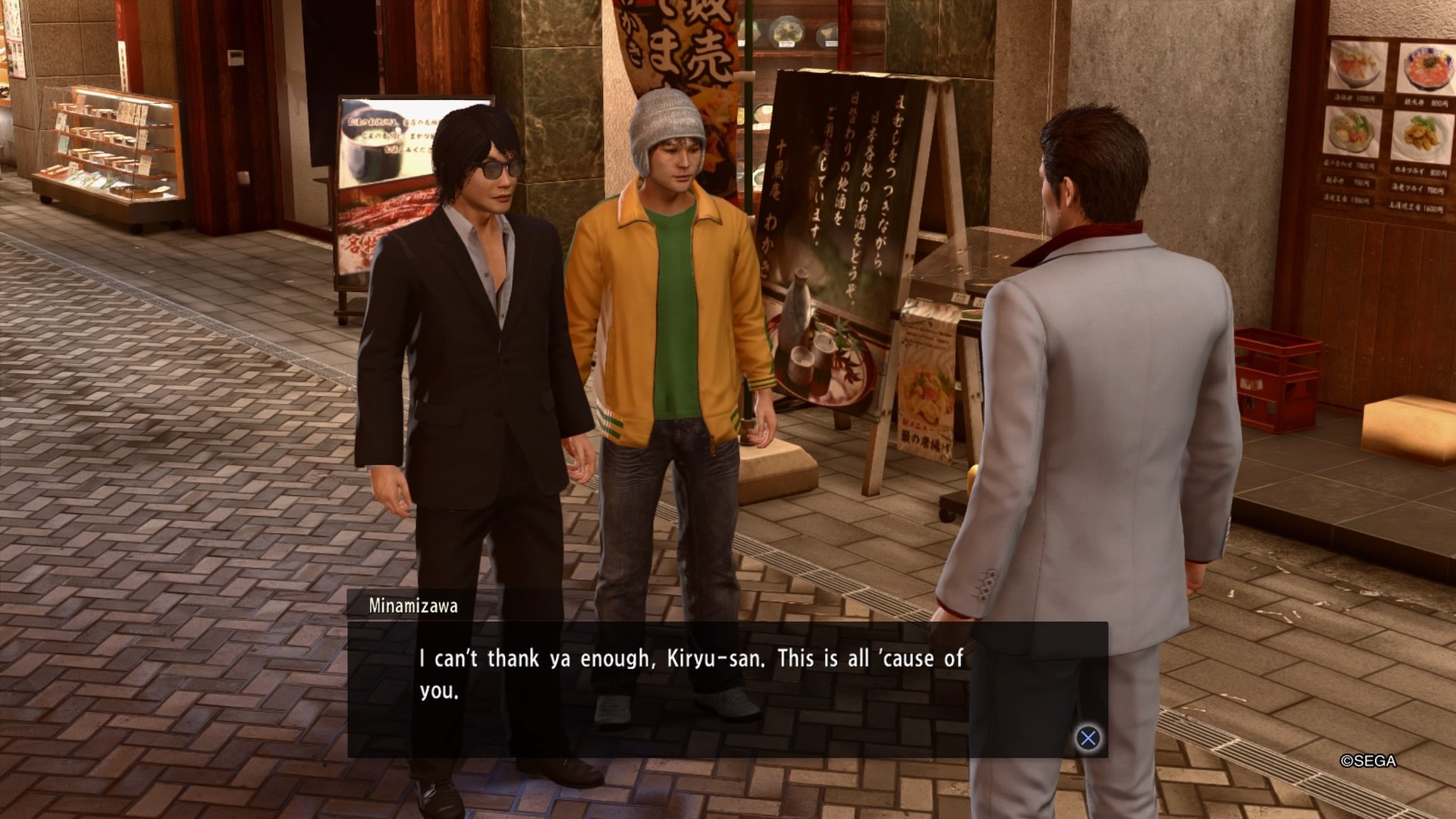 When Kiryu discovers a pair of stand-up comedians down on their luck, he fixes the problem the only way he knows how; by beating one of them up.  This is a very brief and simple side quest, but truly represents Kiryu’s problem solving skills.  Having an issue breaking into the comedy scene?  Well, one swift punch from an ex-yakuza officer should solve that problem.  Right? 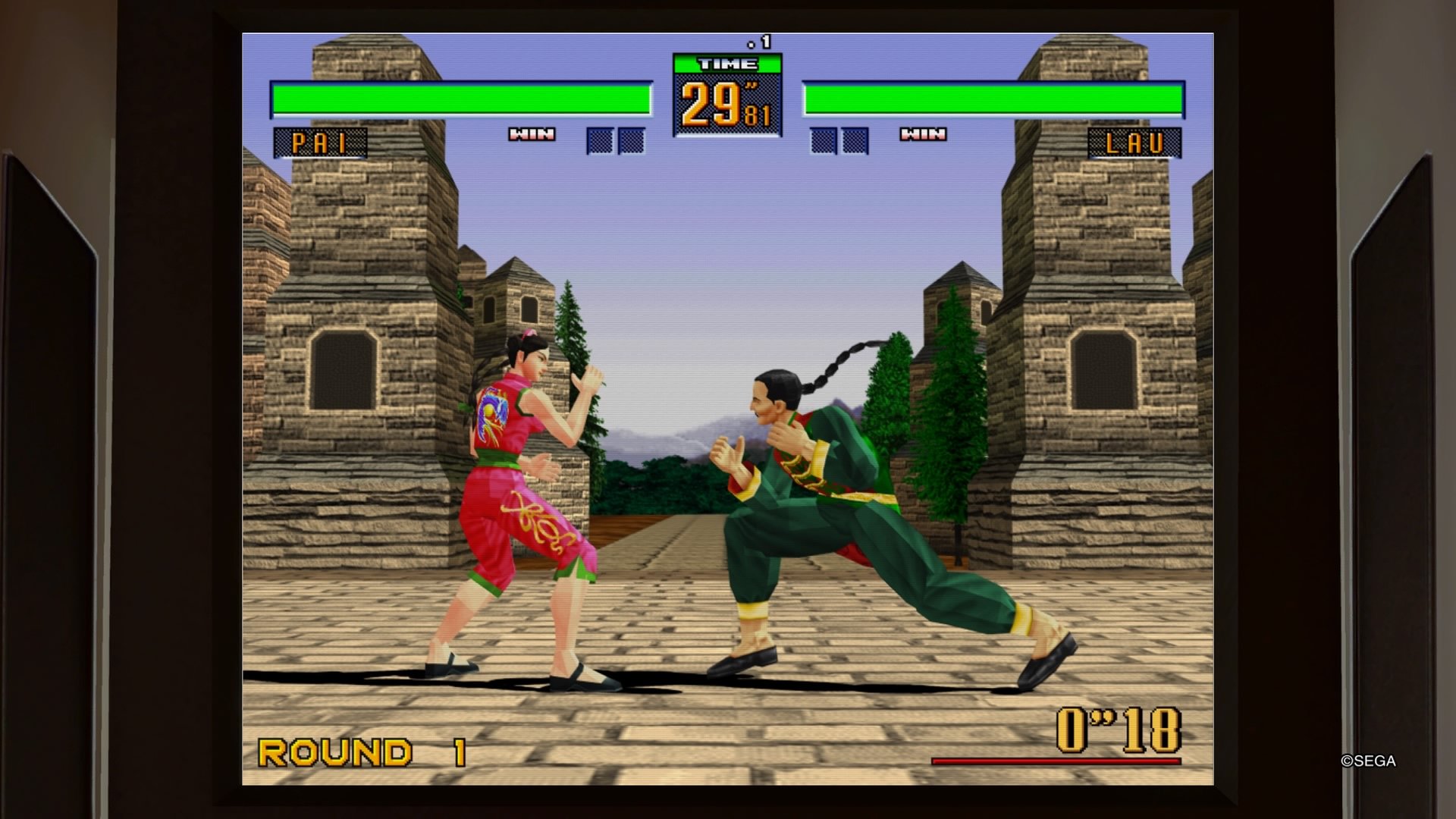 While walking around the streets of Kamurocho, Kiryu is bumped into by an eccentric and wealthy man.  As a way of apologizing, the man gives Kiryu a staggering amount of yen, bragging about his enormous wealth.  The side quest takes you to several locations, but my favorite part involves beating his record in Virtua Fighter.  There are a few arcades spread out across Yakuza Kiwami 2, and they feature popular SEGA arcade titles to play.  This side quest encourages you to not only play Virtua Fighter, but offers a ton of yen if you’re good enough to beat the wealthy man’s record. 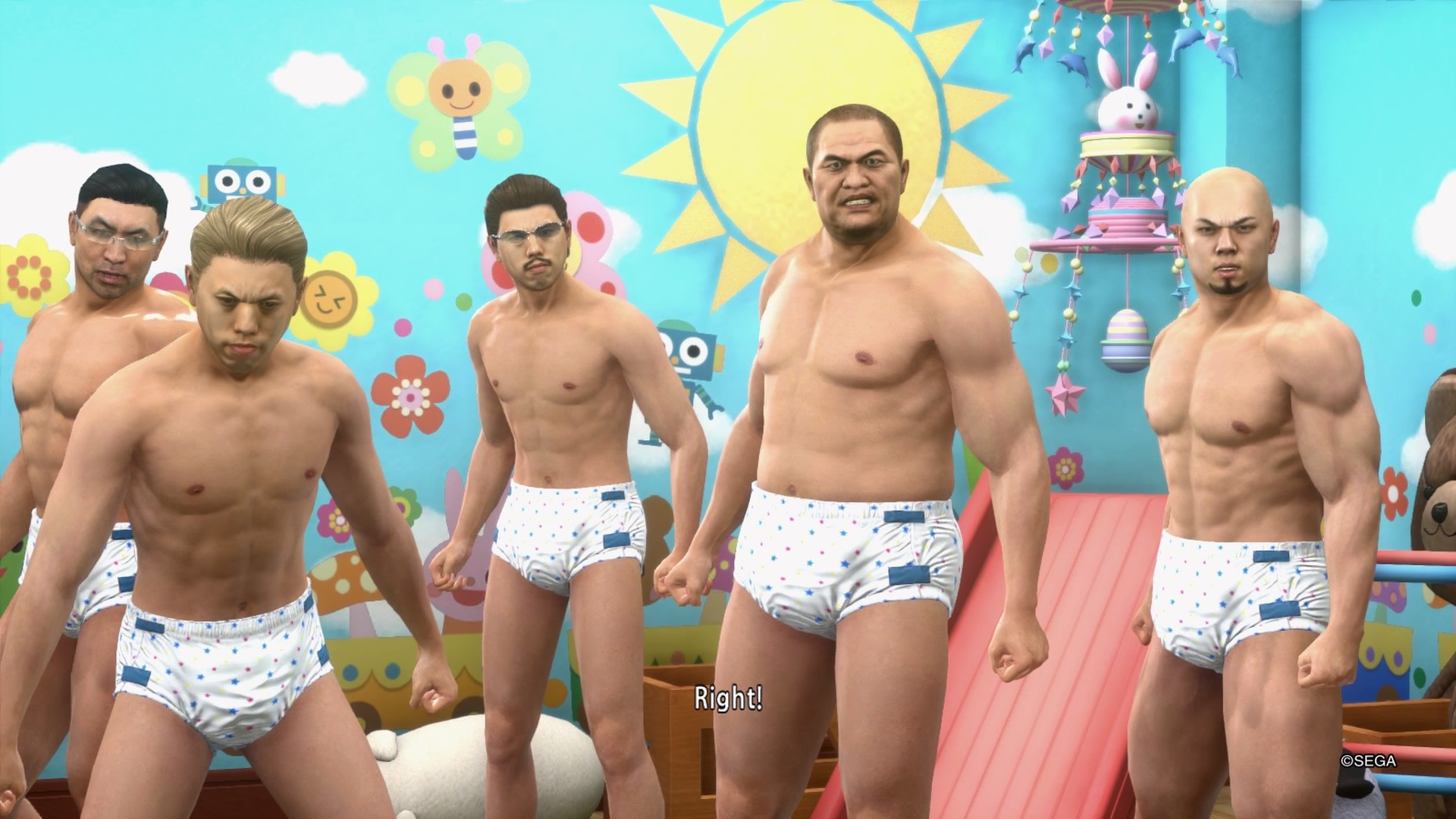 After pummeling some yakuza punks who are blocking an alley, Kiryu gets invited to a club by the family’s leader. Instead of a lavish night club, Kiryu finds himself in a fetish club where men can act like babies. This eventually leads to a massive brawl where Kiryu fends off fully grown men in diapers. I’ve seen some weird stuff in Yakuza games before, but this side quest was just so strikingly weird that I had to include it.  It’s an image you can’t quite shake; full grown yakuza criminals in nothing but diapers.  Whenever I think of Yakuza Kiwami 2, the above image will most likely pop into my mind.  I’m not sure that’s an entirely good thing, but it’s a fact nonetheless.

In this rather basic side quest, Kiryu encounters a man stuck in a public toilet. It turns out the man has soiled himself, sending Kiryu to go purchase new underwear for him. The brief story wraps up with Kiryu reassuring the man that “pooping is natural”, and to not be ashamed. Despite his status, Kiryu is an absolute man of the people. This quest reinforces that with the most basic of human needs; toilet paper.

Rising from the Shadows 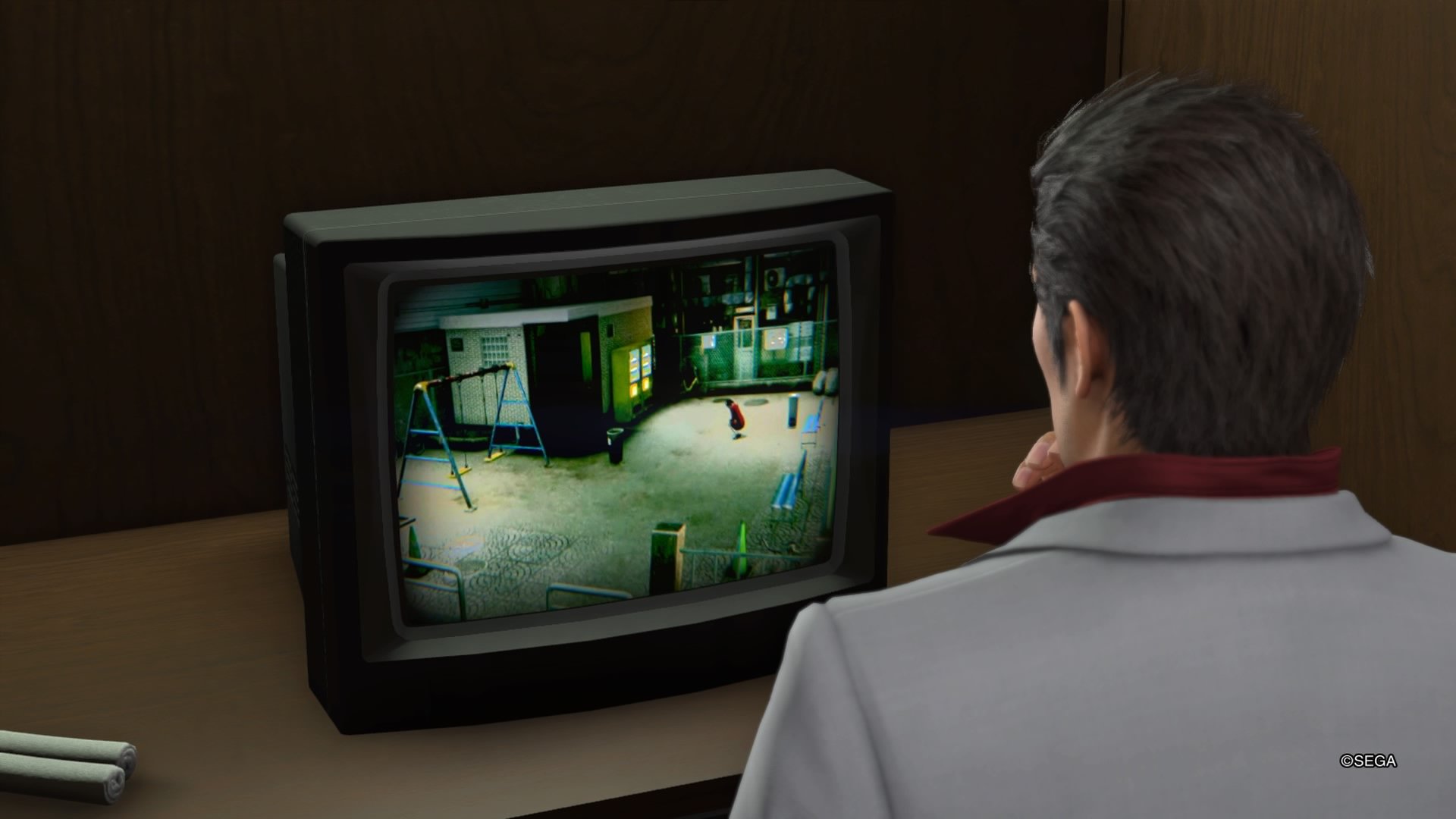 Kiryu encounters a disheveled looking man on the street, who begs him to take a mysterious video tape. After viewing the tape at a nearby video store, Kiryu realizes he is cursed by a female spirit. Using the help of a spiritual medium, Kiryu attempts to exorcise the spirit and free himself from the curse.  When you first encounter this quest, you might have an idea of where it’s going.  Despite being somewhat predictable, it’s actually pretty unsettling and never provides any real closure.  Leave it up to Yakuza to casually introduce ghosts in its universe, but only in one limited side quest. 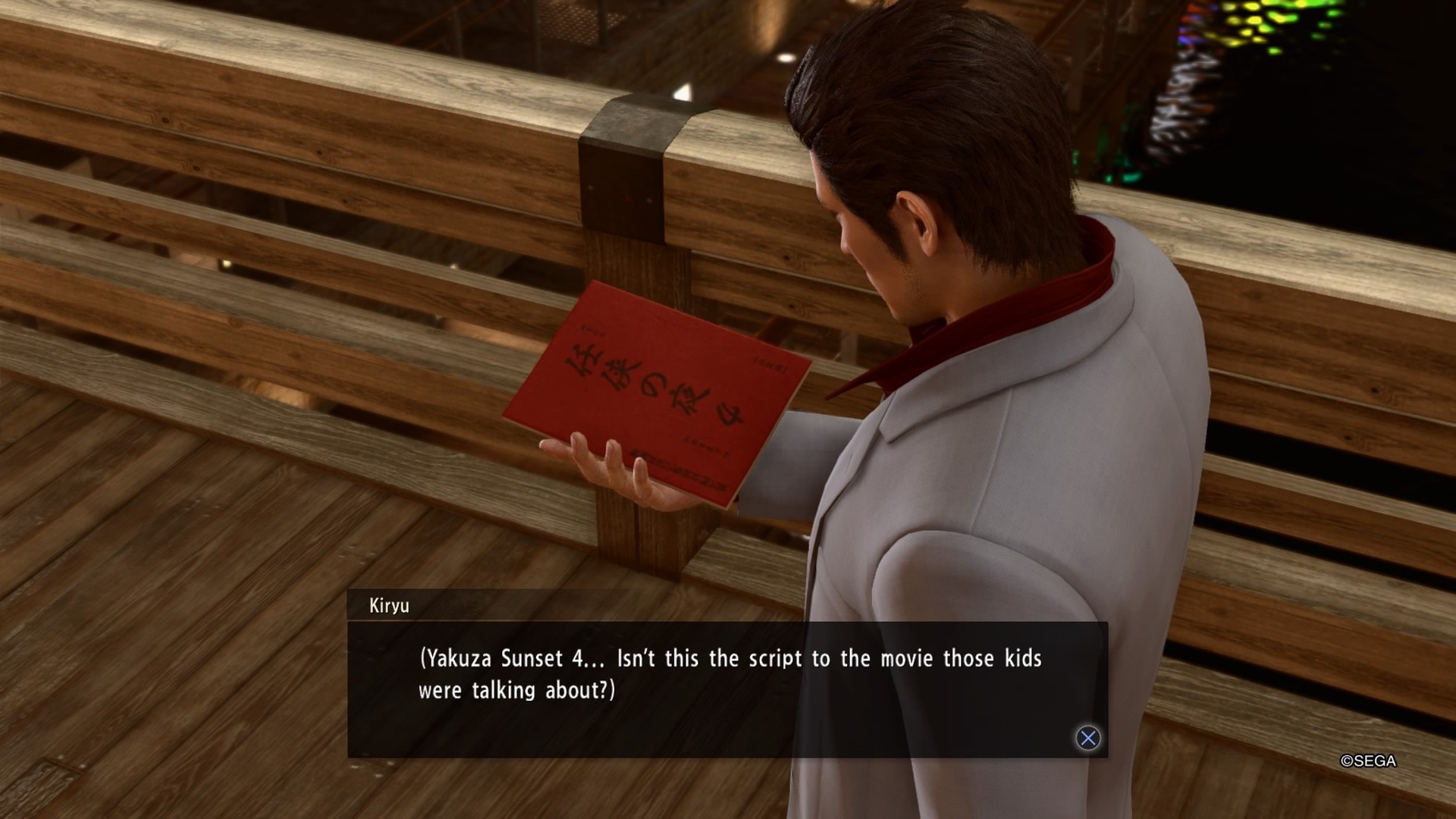 In Sotenbori, Kiryu overhears two teens discussing a popular movie series, Yakuza Sunset. The newest installment in the franchise is filming nearby, so Kiryu goes to check it out. He runs into the director of the film, who has taken fan criticism to heart, and wants to step down from his position. Kiryu takes it upon himself to cheer up the director, first by watching and discussing the previous movie, and then acting out potential scenes. The quest culminates in a final beatdown, where Kiryu displays the kind of violence appropriate for a yakuza movie. Although this quest doesn’t have any completely crazy moments, the meta-humor within is really witty and smartly interwoven. The “Yakuza Sunset” side quest doesn’t exactly break the fourth wall, but it gets pretty dang close. 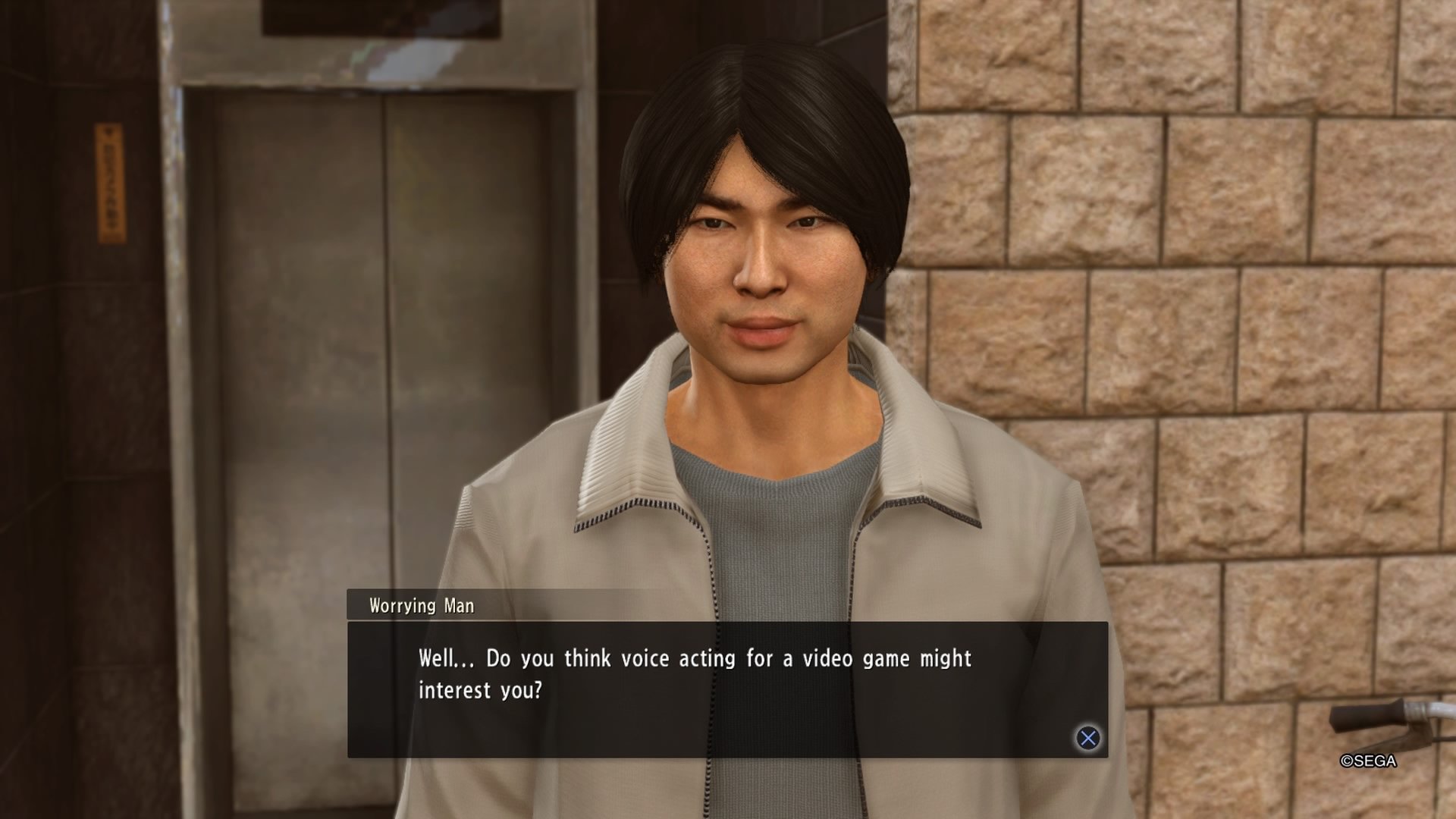 In Sotenbori, Kiryu is stopped on the street by a game developer. Their top voice actor is unable to record his lines, so the developer begs Kiryu to fill in. Without much explanation, Kiryu agrees. He quickly finds himself reading erotica with another man, sound effects and all.  Now, when it comes to Yakuza Kiwami 2, my most distinct memories are of grown men in diapers and Kiryu’s attempt at replicating a vocal orgasm.

There are a few other side quests that I found pretty entertaining, but I don’t want to spoil all the surprises in Yakuza Kiwami 2.  If you haven’t had a chance to play the series yet, I highly suggest hopping in with the remake of the first game, Yakuza Kiwami, or this one.  If anything, the Yakuza franchise is consistently quirky, oddly emotional and hilarious, and super entertaining to play.