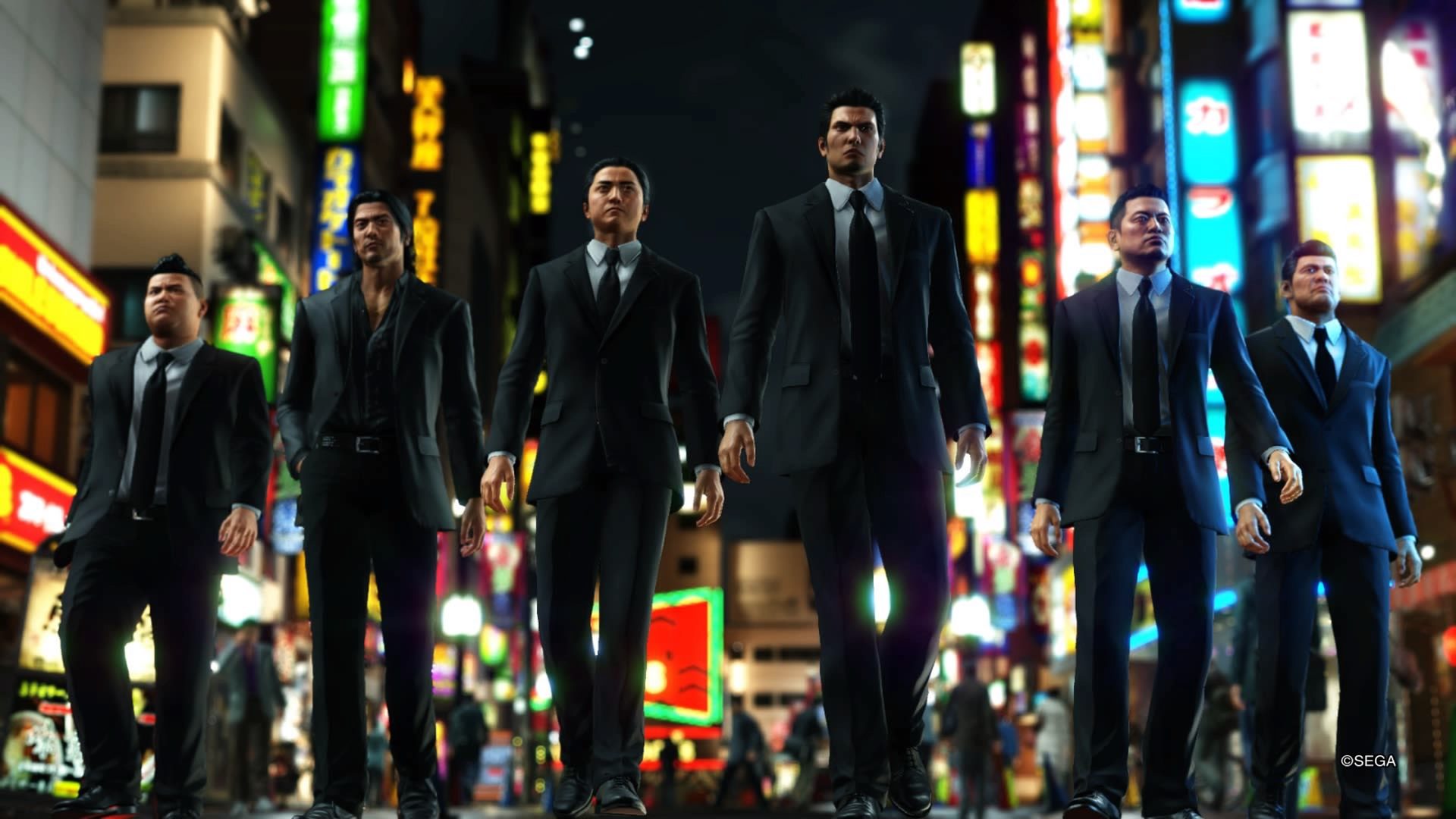 Yakuza 6: The Song of Life sets itself up as the closing chapter of Kazuma Kiryu, the protagonist we’ve followed since the franchise’s premiere.  Best known for its unique free roaming, beat ’em up style, the Yakuza series tells us tales of the Japanese criminal underworld.  Yakuza 6 is packed with content and hours of fighting action, but is it a proper send off for our much beloved Kiryu?  Seven games into a series, there is always the potential for franchise fatigue.  However, the Yakuza series has been refreshingly enjoyable lately, with previous titles Yakuza 0 and Yakuza Kiwami finding a solid audience.  Let’s see if the red light district of Kamurocho, Tokyo is just as fun on the PlayStation 4. 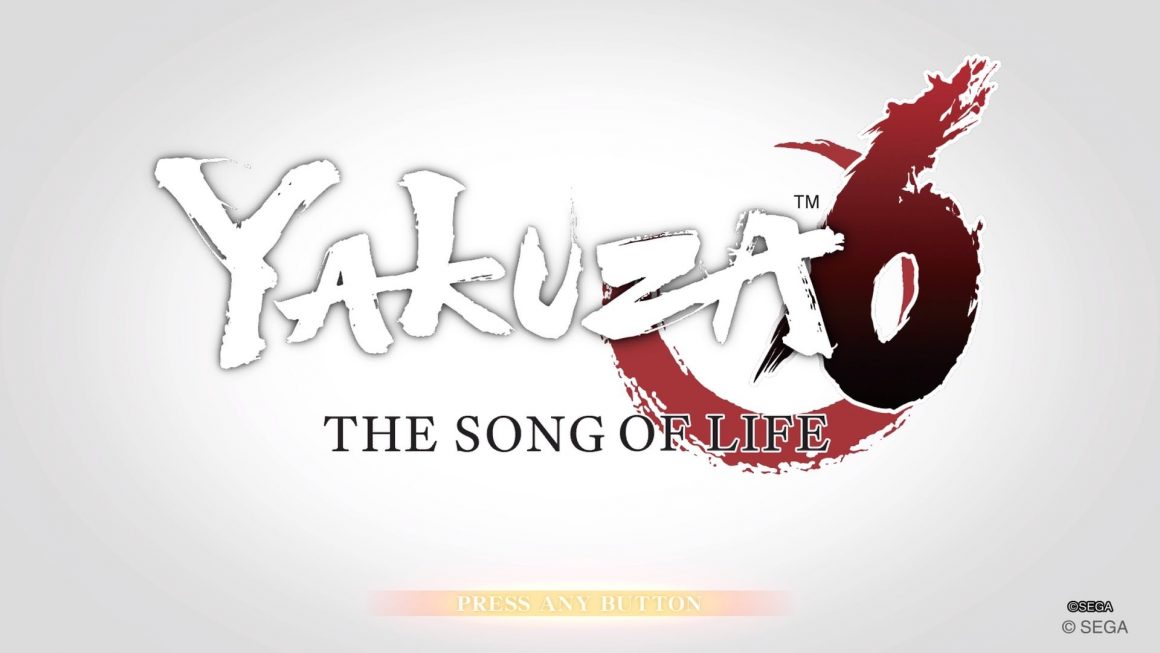 Since it’s the 7th game in the series, you might assume that you have to play through the entire Yakuza franchise in order to understand Yakuza 6‘s story.  This is simply not the case, as developer SEGA has thoughtfully laid out the entire series’ history in digestible ways.  Before you start the game, you can check out the “memories” section of the main menu.  Here, you can find full recaps of every Yakuza game (except for the prequel, Yakuza 0) in the form of images and text.  While you may not completely understand the entirety of the world of Yakuza, these memories at least give you a base understanding of the story leading up to now. 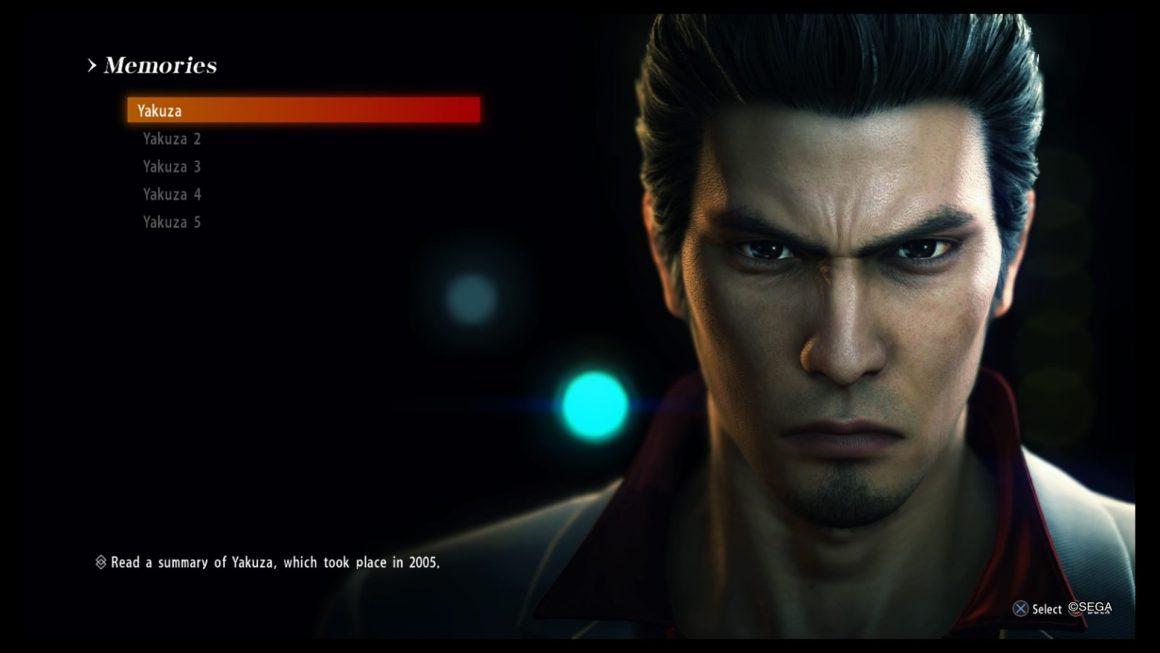 Yakuza 6 sees the return of Kazuma Kiryu, a legendary member of the Japanese yakuza.  A man who is seen more tragedy than happiness, Kiryu is a fearsome and respected yakuza officer.  After leaving the criminal life behind, Kiryu finds himself drawn back to his old stomping grounds of Kamurocho, Tokyo.  Here, he must uncover a giant conspiracy that weaves through the vast network of organized crime.

Yakuza stories can be a bit hard to follow, and Yakuza 6 is no different.  Kiryu’s personal story is quite easy to follow, but some of the overarching narrative and the world it takes place in can be a bit confusing.  Yakuza 6 combines a very personal story with a deeply complex crime story, giving us a narrative that has plenty of depth.  However, cutscenes have a habit of overstaying their welcome, and I occasionally wished for a simpler story.  Yakuza 6‘s story is interesting and engaging, but it can also be a chore to keep up with.  There’s a staggering number of characters, organizations, and connections to keep track of.  Understanding the motivations of these seedy crime gangs and connecting them to the overall narrative can be head spinning.  The convoluted nature of the grander story felt like it was suffocating the far more interesting personal story of Kiryu.  This issue persists until the very end, giving us an ending that feels both immensely satisfying and annoyingly excessive.

While it’s not an issue that bugged me, it’s important to note that all of Yakuza 6 is subtitled.  That means all the dialogue (which is quite a bit), will be spoken in Japanese.  If you don’t speak Japanese, you better be comfortable with reading hours and hours of subtitles. 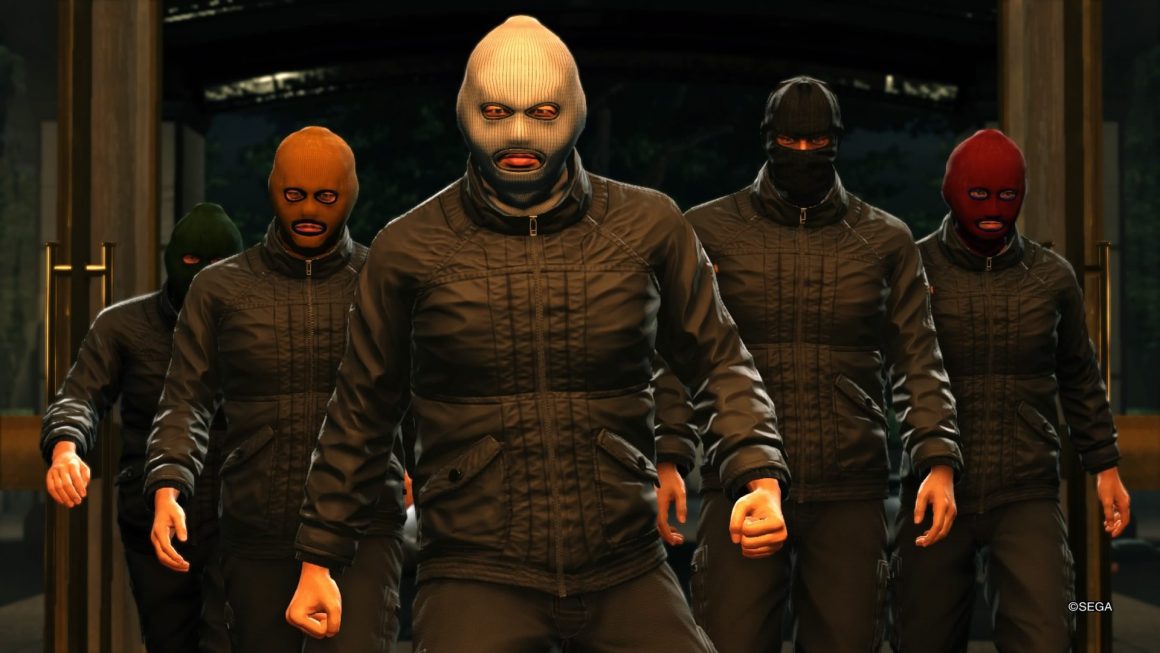 While exploring the streets of Kamurocho, Kiryu will stumble across “sub stories”.  These side quests have historically been a way for wackier stories to take place inside of the Yakuza universe.  In Yakuza 6, some of the best writing is tucked away in these entertaining distractions.  Whether it’s interacting with a Siri-like app on his phone, putting ancient spirits to rest, or tracking down an annoying drone, Kiryu’s sub stories are consistently hilarious and entertaining.

The bulk of Yakuza 6‘s gameplay is hand-to-hand combat, often pouring out into the streets of Kamurocho.  Fighting feels visceral, and there’s a real weight behind your hits.  Combos have a cinematic quality to them, and high-skill combat makes each hit feel purposeful.  You can survive just by mashing buttons, but combat looks and feels the best when you nail down combos.  The various boss fights are also insanely cinematic, resembling something you’d see out of a brutal Indonesian martial arts film or a Jackie Chan vehicle.  The fighting system feels more arcadey than realistic, and battles can get appropriately silly.  For example, you can trigger an “ultimate” state by pressing the right trigger, causing Kiryu to burst into blue flames.  In this state, you are nearly invulnerable to attacks, and can casually pick up a nearby motorcycle and hurl it at enemies. 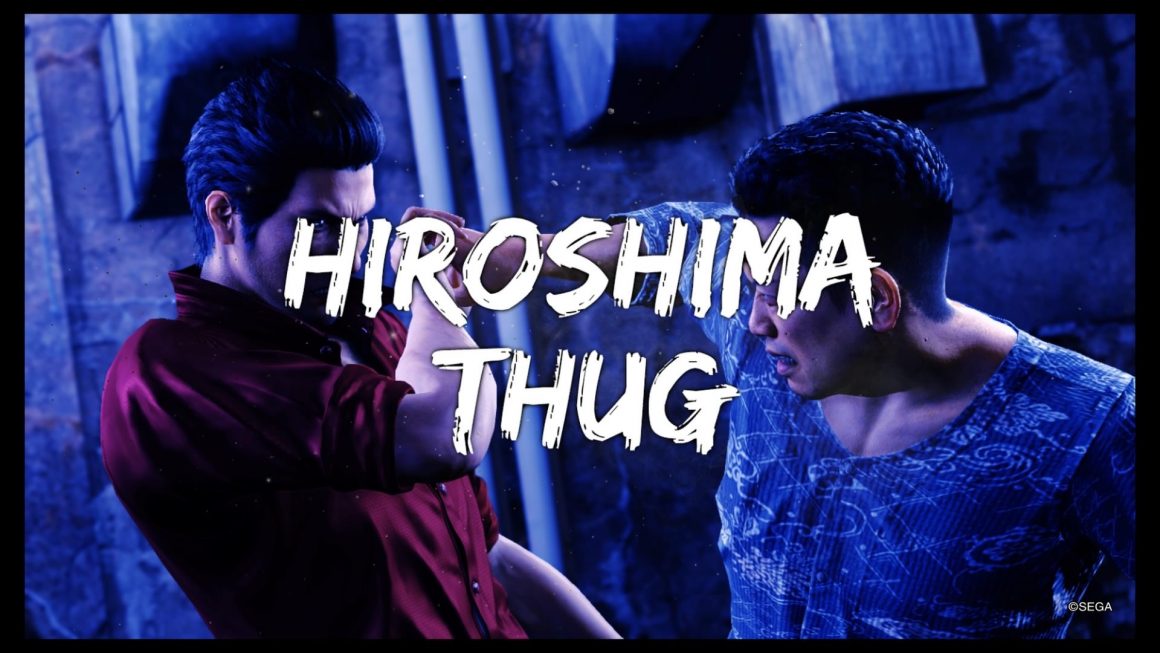 There’s a level of hyper-violence in Yakuza 6 that is both brutal and cartoonish, and it’s also very effective.  It’s also arguably the most basic fighting system in the entire Yakuza series, which may disappoint franchise veterans.  Past games like Yakuza 0 featured multiple fighting styles and expansive move sets.  There is still a skill tree to expend experience points and new moves to learn, but the options available to you are limited.  This makes Yakuza 6 a great introduction for newcomers, but it comes at the cost of the complexity that the series is known for.  I found myself utilizing the same strategy for most fights, but still enjoyed the wildly entertaining skirmishes. 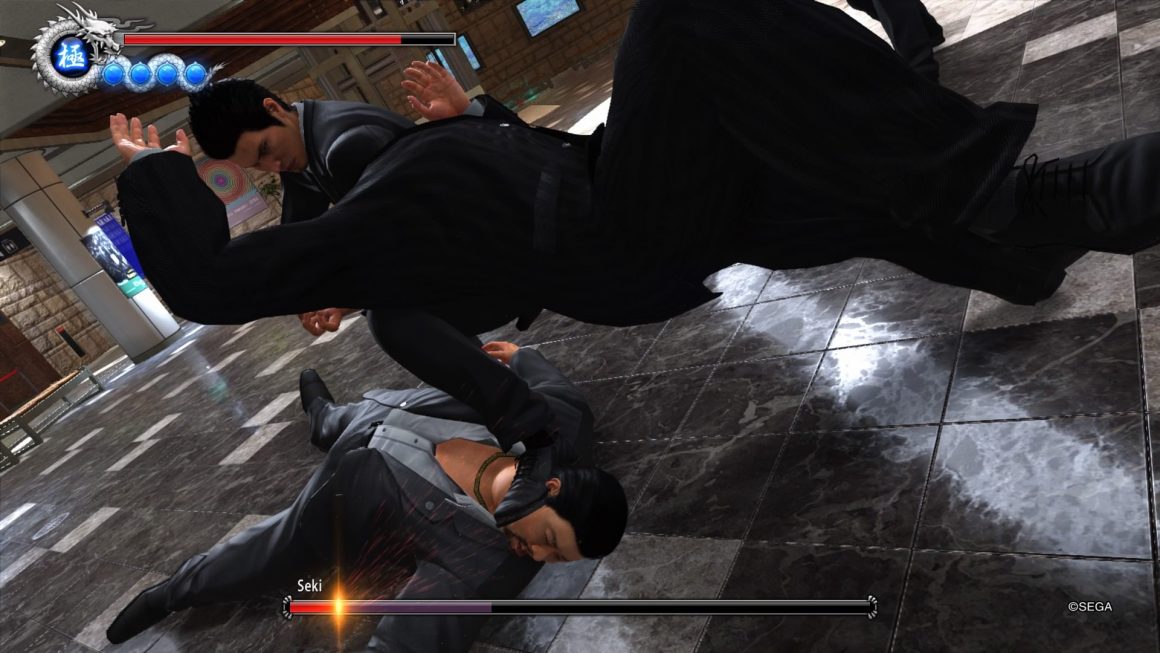 The Bright City of Kamurocho

Exploring Kamurocho is a treat, although many locations and buildings have stayed the same since the last time we visited.  We’ve explored the city many times before in the Yakuza series, but Yakuza 6 makes it feel fully realized.  You can switch between third-person and first-person perspectives at any time, and I found myself gravitating towards the latter option when exploring.  You can see the amount of detail and work that went into Yakuza 6‘s world, and it’s one of the most immersive game worlds in recent memory.  Kamurocho feels truly lived in.  The bright neon lights and busy streets bustle with pedestrians, who feel like real people more than mere bodies.  Whipping out your phone and snapping pictures causes nearby pedestrians to react differently, and it’s these small touches that made Kamurocho feel genuine. 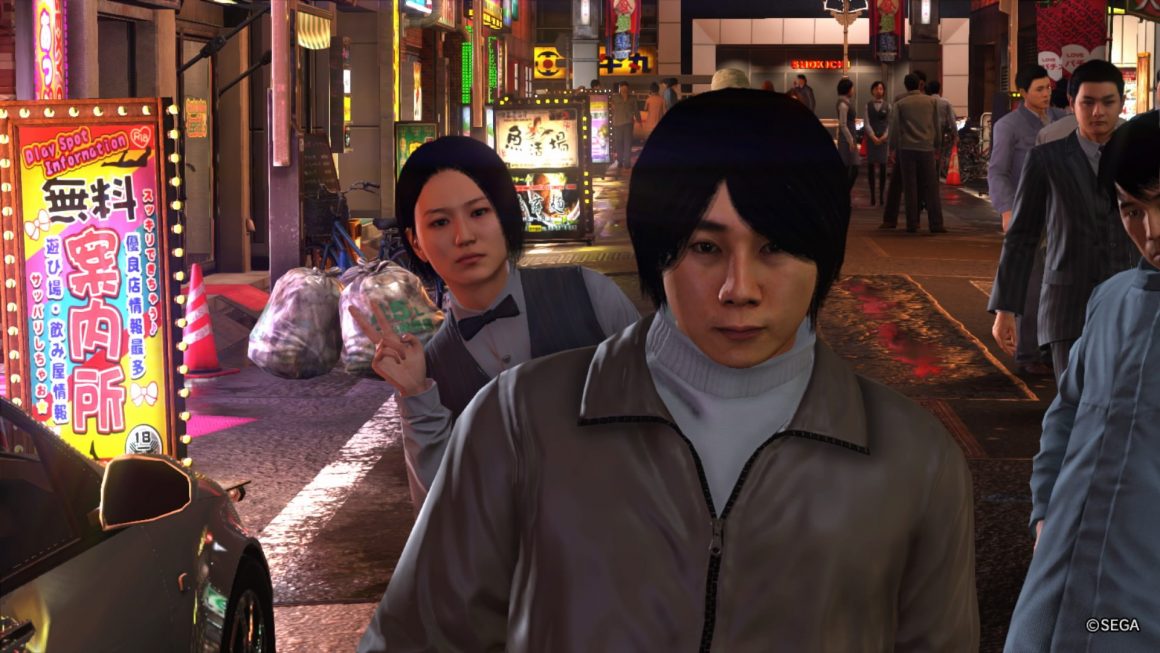 A good portion of the story also takes place in the smaller village of Onomichi.  This seaside village is much smaller and more condensed than Kamurocho, and most of your time here will be spent on main story progression.  While there aren’t as many side activities to indulge in, Onomichi is a nice change of pace.  Some story chapters that take place here can feel drawn out due to the lack of sights to see, but I enjoyed the vastly different atmosphere that Onomichi provides.

Kamurocho is an epicenter of neon and nightlife, with a plethora of shops and eateries to explore.  Yakuza 6 invites you to explore these businesses, engaging in mini-games with a surprisingly good amount of depth.  You might stop by a bar and have a few drinks, getting Kiryu sufficiently buzzed.  After that, you can stumble over to the dartboard, where you can choose from a variety of modes.  Darts not your speed?  Head over to the batting cages to practice your swing, choosing from home run challenges or tests of batting skill.  If sports aren’t your thing, enjoy some high-stakes gambling in a game of mahjong.  My favorite shop is the arcade Club SEGA, which has multiple locations in the game.  Here, you can play full arcade games like Space Harrier, Fantasy Zone, Out Run, Virtua Fighter 5: Showdown, and more. 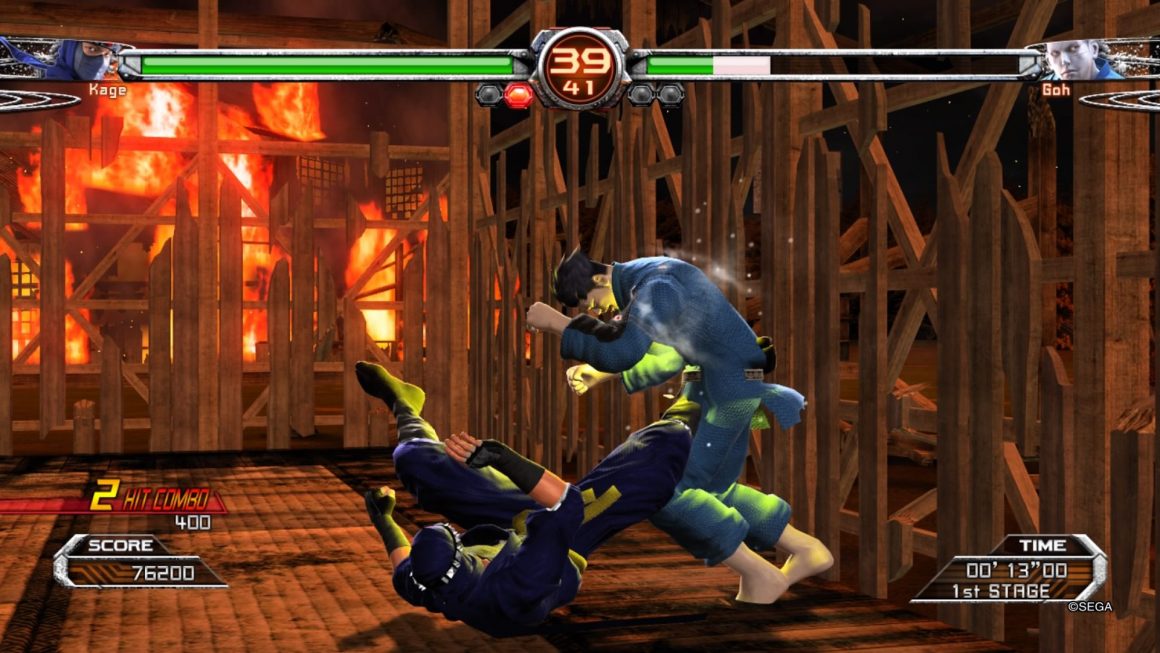 Some activities are unabashedly Japanese, such as befriending attractive females at a hostess club or singing the night away in karaoke.  Generally speaking, Yakuza 6 really embraces all sides of Japanese culture, especially those you may find in a red-light district.  Almost everything you do rewards you with experience points, mostly stemming from a lengthy completion list.  This completion list can be pulled up on your in-game phone and offers a variety of challenges to take on.  There are challenges for exploration, combat, mini-games, and more.  Whether you’re eating the entire menu at a certain restaurant or finally beat the last level in Virtua Fighter 5: Showdown, you’ll probably be earning experience points. 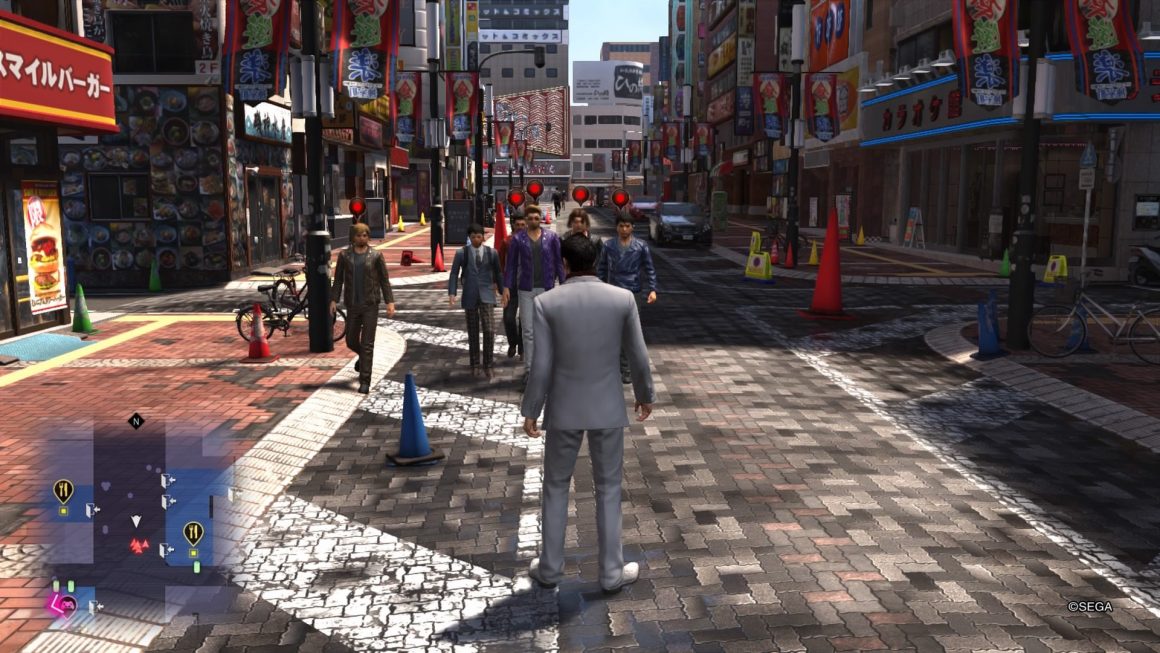 The Bottom Line on Yakuza 6: The Song of Life

Yakuza 6: The Song of Life is an entertaining and engrossing finale for the story of Kazuma Kiryu.  It’s not without its faults, and some of those faults can be deal-breakers.  Yakuza 6 took me well over 30 hours to complete, but my final gameplay time sat at 23 hours.  This makes complete sense, as Yakuza 6‘s cutscenes are as numerous as they are long, and can honestly get exhausting.  This issue is probably much worse for those who don’t enjoy subtitles, or desire voice-over in their native language.  The story is both impactful and ridiculous, balancing between the emotional and gripping story of Kiryu and the complex and confusing narrative surrounding it all.  The fighting system is also gutted in comparison to previous entries, but I still found plenty of enjoyment to be had.

The game looks fantastic, and while character models can look a bit odd, I was fully impressed with the visual quality of Yakuza 6‘s environments.  The main city of Kamurocho is beautiful and dense, full of color and life.  By the time I was done with Yakuza 6, I felt like I had truly walked the streets myself.  The exceptional amount of mini-games and side activities provide plenty of replayability, and although some of the content has been reused, all of it is fun to play.  The score is also exceptionally well done and stands out as a forerunner for the “Best Music of 2018” award.  As a closing chapter to Kazuma Kiryu’s legacy, Yakuza 6: The Song of Life succeeds.