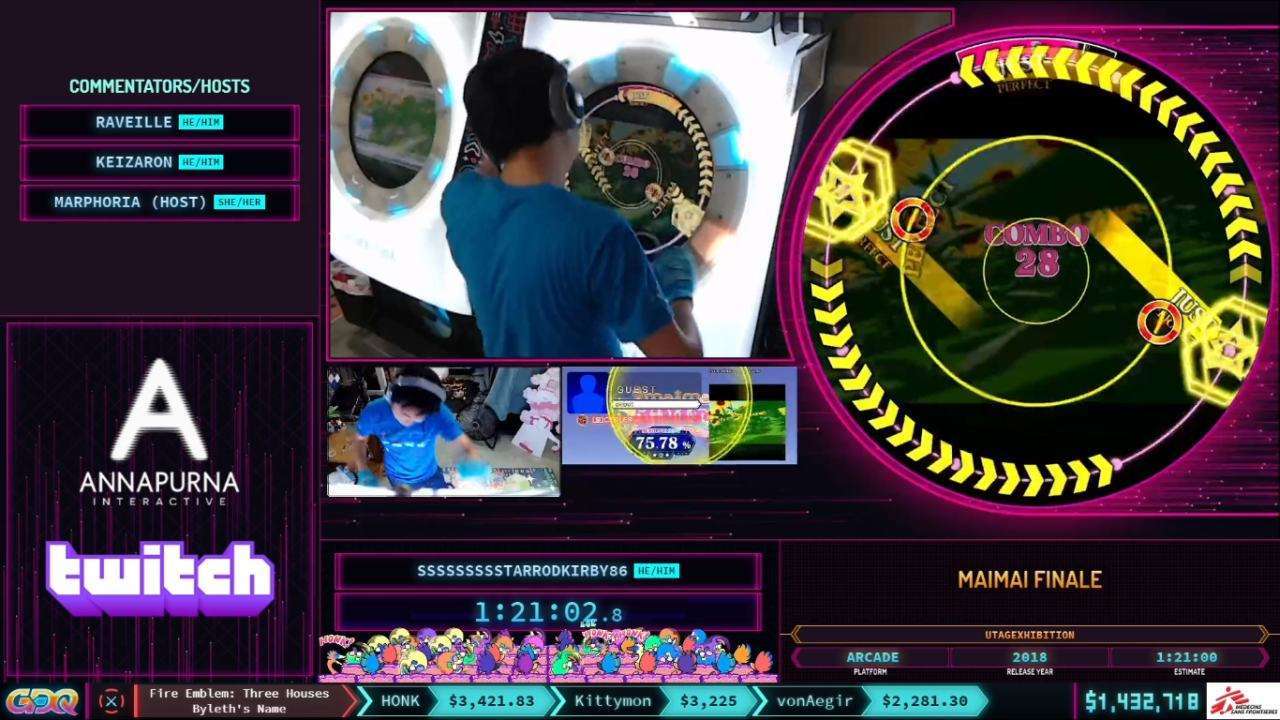 Day six of the Summer Games Done Quick 2021 speedrun marathon was absolutely fantastic, with some of the best speedruns of the entire event crammed into one short day. Variety was once again on display, with speedruns of first-person shooters, retro classics, and even a few arcade games. We had a great time enjoying the various speedruns, but with such a jam-packed day, it can be hard to find a place to start. Worry not, as we’ve compiled our list of the best speedruns from SGDQ 2021 day six!

To watch any of the speedruns mentioned below, you can check out the replays on Games Done Quick’s Twitch channel or their YouTube channel. While we definitely gorged ourselves on speedruns, we were not able to watch every single one, so please keep that in mind while reading the list. If you don’t see your favorite speedrun on here, there’s a good chance we simply missed it. If you’re looking for a fun run to get started with, check out any of our picks for the best speedruns of SGDQ 2021 day six!

This Any% run of the classic FPS Halo 2 by Monopoli is one of the most entertaining runs we’ve seen at this year’s SGDQ, for both reasons intended and unintended by the runner. While Monopoli spent plenty of time shooting down Covenant alien scum as Master Chief, he spent an equal amount of time performing some truly crazy glitches. The run starts off in cooperative play, with Monopoli controlling both characters. Using a series of complex glitches, he is able to possess enemy models with the second player, allowing him to take control of restricted vehicles and generally break the game. Even to a seasoned Halo 2 veteran with hundreds of hours played, the glitches displayed here were mind-blowing.

The entire run wasn’t perfect though. After blundering a particularly hard trick for a few minutes, Monopoli switched over to a “backup Xbox” with the glitch already performed, but accidentally hit the “restart checkpoint” option on the menu, forcing him to execute the glitch anyway. Later on, the game unexpectedly crashed, prompting another quick Xbox switch. These two unintentionally hilarious moments, combined with jaw-dropping glitches and truly remarkable Halo gameplay, made this run of Halo 2 a rollercoaster viewing.

I wanna be the Knight in Shining Armor (Any%) by Chazoshtare

Fangames are ultra-tough precision platformers that can be especially masochistic to play, but runner Chazoshtare didn’t let the difficulty get to them during this run of I wanna be the Knight in Shining Armor. At first look, this game looks notably different from other fangames, with its health bar, melee attack, and non-linear level design. Using a handful of glitches and tricks, mostly that abuse the save system in the game, Chazoshtare was able to smash through I wanna be the Knight in Shining Armor in a crazy good time. Most fangames will take you anywhere from two to twenty hours to beat, depending on your skill, and Chazoshtare sped through I wanna be the Knight in just over 15 minutes. If you like quirky fangames or tough platformers, give this speedrun a watch!

Sonic the Hedgehog CD (Beat the Game) by JoeyBaby69

Speedrunner JoeyBaby69 popped up earlier during the SGDQ 2021 marathon with a run of Mischief Makers, but returned to their preferred franchise in this run of Sonic the Hedgehog CD on day six. Originally released on the Sega CD, Sonic the Hedgehog CD is similar to other entries in the series, but differentiates itself with a time travel mechanic. This run was a great display of both Sonic skill and neat tricks, with a few clips and classic level-wraps for good measure. Despite the game’s clunky controls and inconsistency, JoeyBaby69 pulled off an impressive time, wrapping up the game in just over 20 minutes. Every GDQ marathon needs a bit of 2D Sonic fun, and this run by JoeyBaby69 provided that in full.

We love sidescrolling beat ’em up games, and Streets of Rage 4 was a blast from the past when it was released last year. Having played through the game numerous times, we consider ourselves pretty talented at beating up bad guys, but nowhere near the skill of runner themightybill. In this run, themightybill played on Mania difficulty, regarded as one of the most challenging difficulty settings in any beat ’em up title. Playing as the agile Cherry (our favorite character, too), themightybill made excellent use of their special attacks and combos to avoid damage and survive through each of the stages. This is classic beat ’em up gaming skill at its finest, and it was a joy to watch. Be sure to stick around for the combo showcase at the end, where themightybill shows off incredible juggle-combos with a variety of playable characters.

Half-Life is easily one of the most influential FPS games ever made, changing the landscape of how the genre would play out moving forward. The game’s first expansion, Opposing Force, is considered as one of the best FPS add-ons, offering another perspective on the original game’s events. With a flurry of bunny hops, precise shooting, and damage boosts, runner Muty blasted through the game wicked quick, killing plenty of alien scum along the way. Half-Life speedruns always give us immense nostalgia, so we were happy to see Opposing Force at SGDQ 2021 day six.

Dancing rhythm games are impressive to watch, fun to play, and all-around physically exhausting. Watching Eijiken and the rest of the OhioDDR group dance the night away in DANCERUSH STARDOM was doubly entertaining, given both the skill and endurance needed to play. Over the course of an hour, Eijiken played through some of the catchiest and hardest songs in the game, pulling off choreographed dance routines as they nailed each track. The whole run was full of fun vibes and melodic tunes, guaranteed to have you nodding your head and tapping your foot to the beat. We love the arcade community, so it was awesome to see DANCERUSH STARDOM on display at SGDQ 2021 day six!

The Legend of Zelda: Breath of the Wild (All Dungeons) by johnnyboomr

The Legend of Zelda franchise has a long history in the speedrun community, with Ocarina of Time regarded as one of the most malleable (or broken, depending on how you look at it) games around. In this run of Zelda: Breath of the Wild by johnnyboomr, the glitches are aplenty, including high-flying stasis jumps, wall-clips, and much more. With the added freedom that Breath of the Wild affords, johnnyboomr was able to fly around the map, clear shrines with ease, and speed through the major temples. If you’ve never seen a Breath of the Wild speedrun, the “All Dungeons” category is a good place to start, as it highlights many of the core tricks with a bit of improvisation. We loved watching johnnyboomr break open this game, eventually toppling Ganon at an impressive pace.

This showcase of the laundry machine-shaped rhythm game maimai FiNALE was absolutely bonkers. Over an hour and a half, runner Starrodkirby86 took button-tapping rhythm gaming to the next level, pulling off some of the fastest gameplay we’ve ever seen. Although it wasn’t a traditional speedrun, Starrodkirby86 played through some of the game’s hardest songs, requiring god-like levels of speed and precision. Going above and beyond, Starrodkirby86 got a perfect score on far more levels than expected, resulting in some of the finest maimai FiNALE gameplay ever streamed. SGDQ 2021 day six was impressive and fast in a number of ways, but this maimai FiNALE showcase was in a league of its own.

By the end of day six of SGDQ 2021, the marathon has raised over $1,400,000 for Doctors Without Borders. There’s only one day left in the marathon, so we’re excited to see the results of this next 24-hour push. We definitely encourage you to donate to the event if you feel inclined.

We’ll be back tomorrow for the final day of SGDQ 2021. This week has been an absolute blast and we’re already looking forward to the next marathon! You can follow along with us live on Twitter for speedrun reactions (@official90skid) as well. Enjoy the marathon!