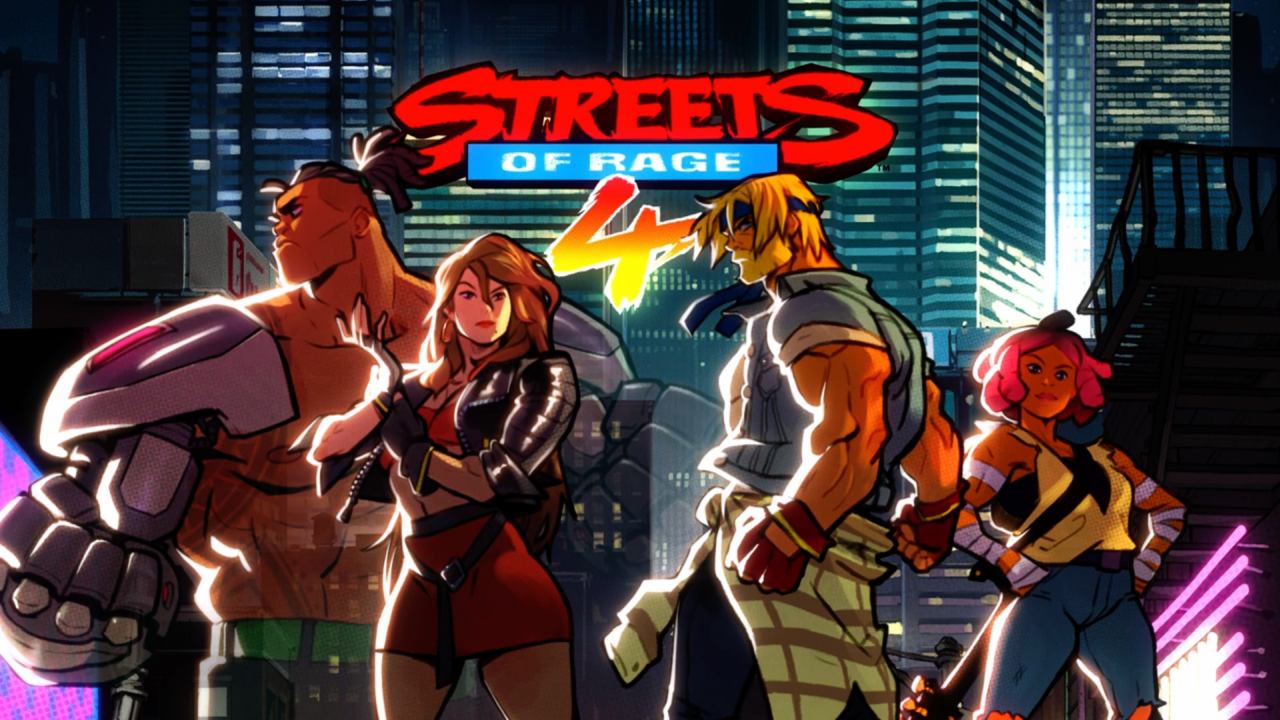 Streets of Rage 4 is a sequel to Streets of Rage 3, a beat ’em up game that originally released in 1994 on the Sega Genesis. The late 90s were the golden age of beat ’em ups, but the genre has seen a resurgence in recent years. Although the original three Streets of Rage games were developed by SEGA, this throwback sequel was crafted by developers Dotemu, Lizardcube, and Guard Crush Games, a handful of indie studios with a lot of passion for the genre. Arriving nearly 26 years after the release of the last game, Streets of Rage 4 is an unexpected follow-up that attempts to revitalize the franchise while simultaneously paying homage to the classic retro trilogy. Does Streets of Rage 4 provide players with an enjoyable experience that’s reminiscent of the originals, or is this just an attempt to cash-in on the nostalgia of 90s gamers?

Back on the Streets

The Streets of Rage franchise has never been super complex in terms of narrative. There are bad guys on the streets. You, being full of rage, are going to beat up said guys. Streets of Rage 4 is very similar in that regard, for better or worse. Taking place a decade after the events of the last game, Streets of Rage 4 is a remarkably familiar plot, involving four vigilantes attempting to take down a bustling crime syndicate in their city. Instead of the notorious Mr. X running the show, Streets of Rage 4 features his two twin children as antagonists, simply known as the “Y Twins”. As things get particularly bad around town, two classic Streets of Rage characters, Axel and Blaze, team up with two newcomers, Cherry and Floyd, to rid the streets of the Y Twins and their criminal cohorts.

The 12-stage long Story mode takes players across environments both familiar and new, tasking them with smashing through baddies using a surprisingly nuanced fighting system as well as various weapons and offensive items. You can play either solo or with up to four players locally (only two players can team up in online matches), taking on the linear, arcade-like set of levels for some cathartic face-punching action. The gameplay is the primary focus of Streets of Rage 4, but that doesn’t exactly let it off the hook. There’s no voice-acting in dialogue scenes, there are only a handful of animated cutscenes, and the plot that exists is altogether by-the-books. While the experience is dotted with some fun fan-service moments, don’t go into Streets of Rage 4 expecting a modern story overhaul. Unlike its flashy new visual style, the storytelling is all but standard fare for the beat ’em up genre, with only a few notable story moments to speak of.

The Power of Rage

When you first start Streets of Rage 4, there are four playable characters available to choose from. Each of the aforementioned vigilantes share certain traits, but each character is mostly unique in terms of play-style. Axel, the middle-aged, blonde, ex-cop is slow-moving but strong, capable of grappling enemies and juggling them for long combos. The young and vibrant Cherry is exceptionally quick and agile, especially in the air, allowing you to easily dodge enemy attacks with the ability to run. The stylish and swift Blaze provides a mixture of Axel and Cherry’s play-styles, offering sufficient speed without sacrificing power. Finally, the fourth fighter Floyd is a powerhouse of pain, moving incredibly slow but dealing out huge amounts of damage with his cybernetically enhanced fists. Regardless of who you choose, you’ll be moving from the left side of the screen to the right, beating the crap out of anyone who crosses your path.

Combat is quick and fun, keeping your fingers busy with button-mashing enjoyment. Like other beat ’em ups, Streets of Rage 4 has an easy-to-learn fighting system, but there are a few interesting choices that offer varying degrees of nuance. Simply put, every character has a basic attack as well as a backwards attack, allowing you to punch enemies in either direction. You also have a special attack, which is great for extending and finishing off combos, but using it will temporarily decrease your health. However, unlike in other Streets of Rage games, you can earn the health back by attacking enemies, which encourages you to play aggressively and use your special attack often. Each character also has a unique “star move”, which can be used a few times per level (depending on how many star power-ups you find). These moves are often excessively flashy and consistently fun to use, letting you dominate any opposition with force.

Generally speaking, fighting baddies in Streets of Rage 4 feels really good. Each character feels unique enough that you’ll want to try them all (which is important for the longevity of the experience), and different combinations of characters allow for cool team-based combos. There’s a bigger focus on juggling enemies than ever before, as you’ll quickly begin pulling off 30 or 40 hit combos with ease. Regardless of who you play as, Streets of Rage 4 wants you to feel powerful and intimidating. The only real problem I have with the game’s fighting system is the lack of a universal run or dash move, as Cherry is the only character of the initial four who can run. That said, whether you smash the attack buttons or take the time to learn the intricacies of every character, you’ll likely have a great time beating up bad guys.

A Reason To Keep Fighting

One of the most common complaints you’ll see about the beat ’em up genre is that the games are too short. It’s something I can understand; if you’re going to pay full price for a game, you should expect more than a few hours of gameplay. There are five different difficulty settings in Streets of Rage 4, but if you’re playing on Easy, Normal, or even Hard, you can expect the game to only take around 2 to 3 hours to complete. Since Streets of Rage 4 sits at a mid-tier price point, that’s not completely unfair in terms of game length, but some players might feel jilted by such a short game. Luckily, Streets of Rage 4 absolutely nails the replayability factor by including dozens of fun unlockables, including extra modes, additional characters, and secret levels.

Once you finish your first Story mode playthrough of the game, you’ll unlock Stage Select, Boss Rush, and Arcade modes to enjoy. While these modes don’t offer anything notably new or unexpected, it’s nice to have a variety of ways to enjoy the content. The Boss Rush mode is a fun way to battle through the game’s numerous fun and well-designed bosses, while Arcade mode provides a retro experience that will similarly test your beat ’em up skills. All of these modes can be enjoyed in both online and local multiplayer, including the competitive Battle Mode, which lets you duke it out against your friends in classic fighting game match-ups.

Streets of Rage 4 keeps you engaged with its steady stream of unlockable content thanks to one key feature; the lifetime points meter. Regardless of whether you’re enjoying Story mode by yourself, playing Arcade mode online, or battling in Boss Rush, you’ll earn points as you defeat enemies. Obtaining a certain amount of points in a level awards you with extra lives per usual, but these points are also the key to unlocking new playable characters. At the end of each level, your earned points will be added to your lifetime point meter, which has a handful of ticks along the bar. Each time you earn enough points to reach a tick on the meter, you’ll unlock a new retro character to play as. New characters are unlocked quickly and are plentiful, encouraging you to play through the game numerous times. While Streets of Rage 4 is fun enough as a one-and-done game, the surprisingly simple yet addictive method of unlocking content makes it a game that’s consistently rewarding to return to.

The Bottom Line on Streets of Rage 4

I grew up with the original Streets of Rage trilogy on Sega Genesis and consider the beat ’em up genre one of my favorites, so I might be a bit biased in that regard. That said, across my numerous cooperative playthroughs, I saw both franchise newcomers and veterans become quickly addicted to Streets of Rage 4 and its ridiculously fun combat. It strikes a great balance between new and old by taking classic, tried-and-true gameplay and injecting some modern mechanics into the mix. The long string of unlockable characters and extra modes add a significant amount of replayability to the package, encouraging you to continue playing long after the credits have rolled.

While playing Streets of Rage 4 for this review, I completed the game five times over. Four of those playthroughs were in cooperative play (two online, two locally), with a single solo run to round out the experience. Apart from a handful of crashes and disconnects during the online sessions, I had a great time with each and every playthrough. Although the narrative is weak and the game’s length is a bit too short, the surplus of unlockable content keeps you coming back for more. There’s something distinctly cathartic about sitting back and smashing buttons for a few hours, which is an experience that Streets of Rage 4 pulls off quite well. If you have any love for the beat ’em up genre, you should grab a friend and hit the virtual streets, as Streets of Rage 4 brings the franchise back with style.