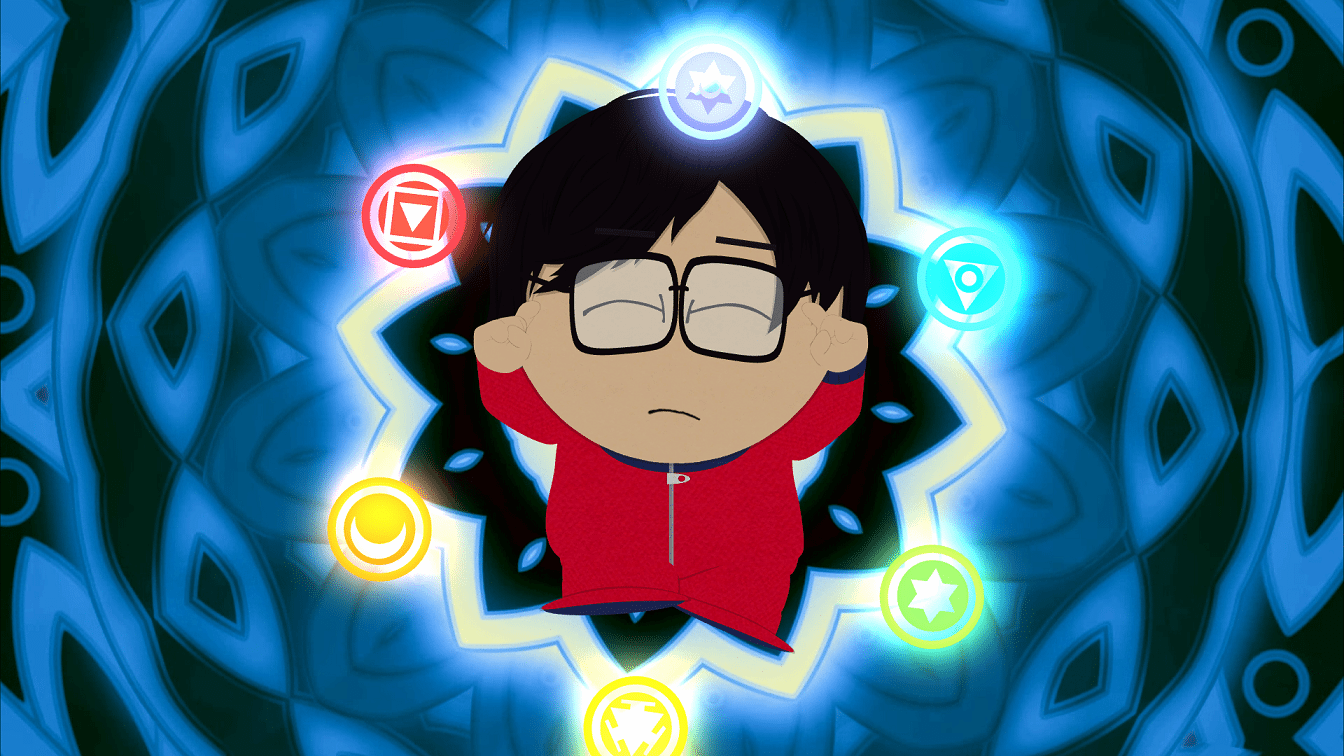 The South Park brand hasn’t always been successful when transferred to the video game medium.  A humorous cartoon exceeding 20 seasons, the show has struggled to make the jump to games for a while.  Fans finally got sweet satisfaction with the release of South Park: The Stick of Truth in 2014.   The RPG charmed gamers with its great animation and hearty humor, but had a hollow combat system.  South Park: The Fractured But Whole is the sequel that promises to expand on combat, provide a funnier story, and give us more of the same great comedy we expect.  Does South Park: The Fractured But Whole improve on its predecessor, or stumble?

Coon & Friends (and the New Kid)

South Park: The Fractured But Whole kicks off right where The Stick of Truth left off.  Deciding that the world of fantasy has bored them, the kids take off to play superheroes.  You play as the “New Kid”, and although you’re well seasoned in the land of elves and orcs, you lack super powers.  As you eagerly try to join in the fun, tensions soon rise between friends.  The kids split off into two teams: Coon & Friends and Freedom Pals.  Both teams pursue one goal; saving Scrambles the kitten and getting the $100 reward.

Unlike other open world RPG’s, South Park: The Fractured But Whole doesn’t veer too hard into side content.  There’s a good amount of collectibles and side missions to pad out your time, but for the most part, the game is story driven.  You can take plenty of time exploring the world of South Park, and you’ll be rewarded for doing so, but the game is more about its quests than anything else.  In that regard, The Fractured But Whole suffers from a few pacing issues, but always manages to hold your interest.  The humor can be juvenile (you are playing as a kid who has literal super-powered farts), but it manages to be funny time and time again.  I haven’t laughed this much at a game’s writing in a while, and that’s worth it for me.

The Powers that Be

Playing superheroes is far different from playing fantasy, and that is accurately reflected in combat.  Before, combat was a turn based affair, similar to something you’d see in Final Fantasy.  While the turn based mechanics are still there, you can now move around your characters during combat, and your abilities have been suited for this new movement.  Each fight takes place on a grid, and you strategically move your party around, attacking from different angles.  Instead of the standard RPG classes (mage, warrior, cleric, rogue), The Fractured But Whole offers a wide variety of specialties, which means characters are useful in multiple situations.  For instance, Kyle’s super hero “The Human Kite” can shoot laser beams, heal party members, and buff your defense.  As the game progresses, your abilities also get fleshed out, eventually becoming the master of all powers. 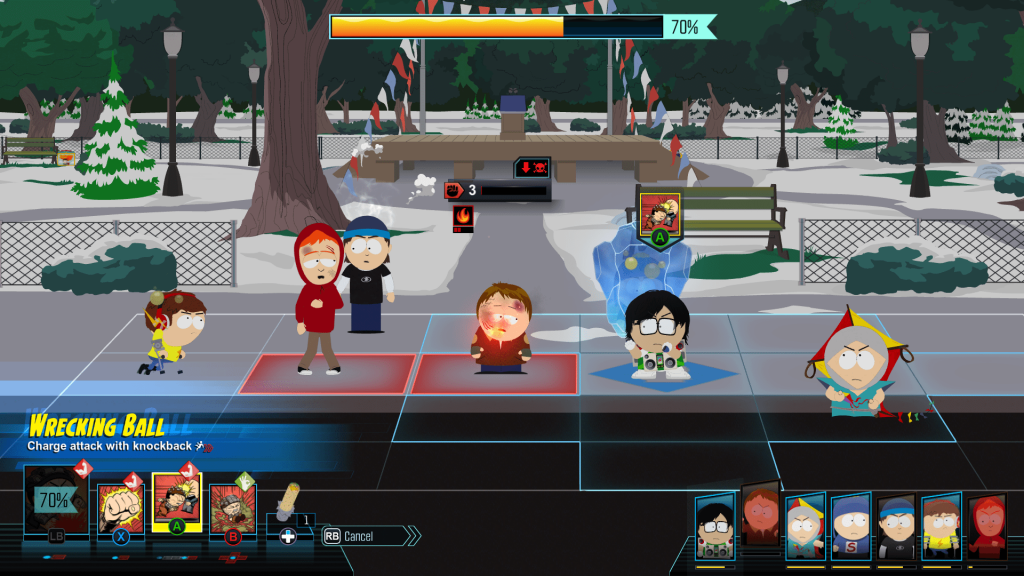 The game isn’t particularly difficult, and I would have no issue recommending it to RPG newcomers.  South Park: The Fractured But Whole makes sure not to front load you with detail, rather slowly dishing out its features as you make progress.  Your character often feels very powerful, and I never felt overwhelmed or frustrated.  There’s a lot of options in how you upgrade your character, what kind of party you select, and just how strategic you want to get.  Sure, you can set up intricate knock backs, perfectly placed traps, and status effect combinations.  Conversely, you can often just punch the nearest person to you, use an item when you’re low on health, and come out victorious. 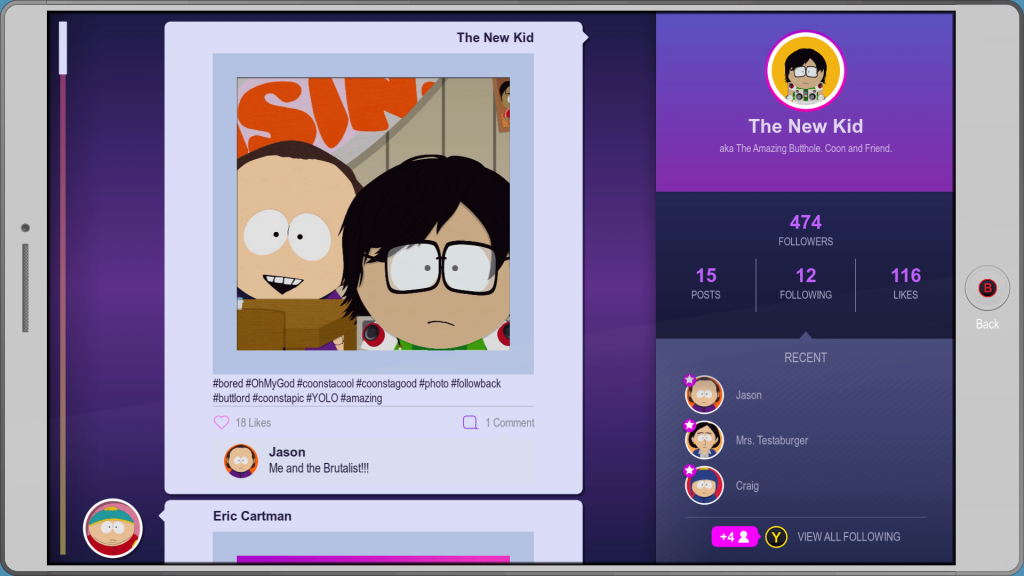 As you walk around the town of South Park, you’ll run into various characters.  In a never ending quest to get as many followers as possible, your main aim is to collect selfies with the townsfolk.  Not everyone is so willing for a photo-op, with most requiring you complete a small task or puzzle first.  As you try to befriend everyone in town, you’ll learn the game’s crafting mechanics, find out more about yourself, and constantly check your phone.  Navigating the town can also get a bit confusing at times (which is funny, considering how simple South Park’s lay out is), but a quick reference map makes life easy.

If there’s one thing that South Park: The Fractured But Whole does well above everything else, its the presentation.  Even at a studied glance, it’s hard to distinguish the actual cartoon from the game.  The animation is top notch, and the world springs to life at every chance.  The town of South Park is packed to the gills with references and easter eggs, and sometimes walking around is half the fun.  For as raunchy and gross as it can get, South Park: The Fractured But Whole is wildly imaginative, and a real treat for those looking for a unique visual style.

This attention to detail and style extends into every seam of the game.  From item descriptions to character moves, every aspect of the experience screams South Park, and it should.  For fans of the show, it’s a constant barrage of visual splendor and in-jokes.  For complete newcomers, it’s hard to deny just how well they capture the distinct look of the show.

The Bottom Line on South Park: The Fractured But Whole

Is South Park: The Fractured But Whole a worthy sequel?  Absolutely.  Does it encapsulate the tone and humor of the show, specifically in regard to its evolution since the original game?  Of course.  Is it better than The Stick of Truth?  That’s where the line starts to blur. 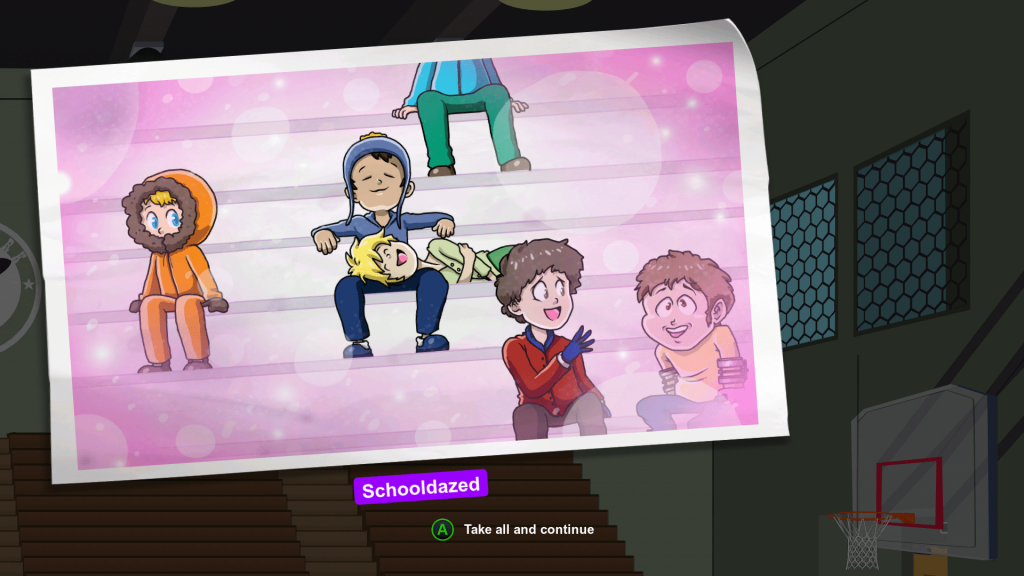 While The Fractured But Whole has a far more robust and entertaining combat system, it can feel a tad bit repetitive at times.  Likewise, the expanded world and story suffer from pacing issues, but not enough to taint a great tale.  The game is hilarious, and full of surprising moments in both a narrative regard and an “I can’t believe they just went there” regard.  If you liked the first game, you should definitely grab this one.  The main story and side quests should take you around 20 hours to complete, with a few more hours of content for those who want 100% completion.  I had a great time, and I’m pretty sure you will too.