RUINER is a stylish indie action game developed by Reikon Games and published by Devolver Digital.  Taking place in the future, RUINER shows us a cyber punk dystopia where attitude and mayhem reign supreme.  As a nameless assassin, you blast and tear through hordes of enemies, through a tale of revenge.  The game has style, but does it play well?  Devolver Digital rarely does us wrong. 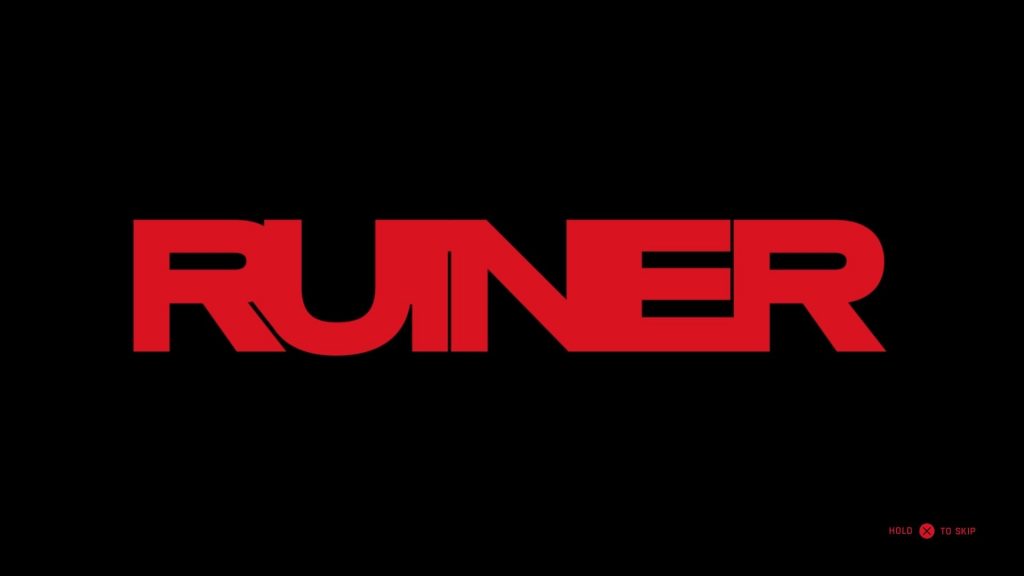 RUINER‘s defining feature is its style, which reinforces the neon-lit world and cyber punk tone.  Most characters in the game are nameless, but that’s all part of the attitude.  In the futuristic world of RUINER, technology rules everything.  Although it’s primarily a hectic action game, the world revealed to you throughout the main story is interesting.  Many of the game’s 15+ levels feel dark and metallic, with a heavy technological base.  It’s like the world of the Matrix film series.  The atmosphere and world building transfer into both character design and narrative, creating a sci-fi experience that contains classic themes like sentience, clones, hacking, and some iffy technological stretches.

The story told in RUINER‘s world is pretty straight forward for the most part, despite its attempts to be complex and deep.  You play as a nameless assassin, and someone has hacked your brain and kidnapped your brother.  After they force you to attempt an assassination on the President of “HEAVEN”, a major corporation, you try and strike back and reclaim your mind.  Helped along by an emoji-using hacker sidekick, simply known as Her, you hunt down those responsible.

The characters you meet along your journey are interesting, but some of the dialogue and quality of writing can come off as a failed attempt at edgy.  Generally speaking, the world and story of RUINER have some interesting themes, but ho-hum writing weighs down the otherwise well designed atmosphere.  There’s not much in the way of voice acting, as most of the dialogue is simply text.  As a mostly silent protagonist, a good chunk of the story will come in the form of exposition.  These bouts of dialogue (using before or after a bigger battle) usually resort to forced cursing and laughable remarks.  When one boss threatened to “snort my ashes”, with a couple expletives thrown in, I genuinely chuckled.  It was a funny comment, but meant to be taken as a seriously intimidating insult. 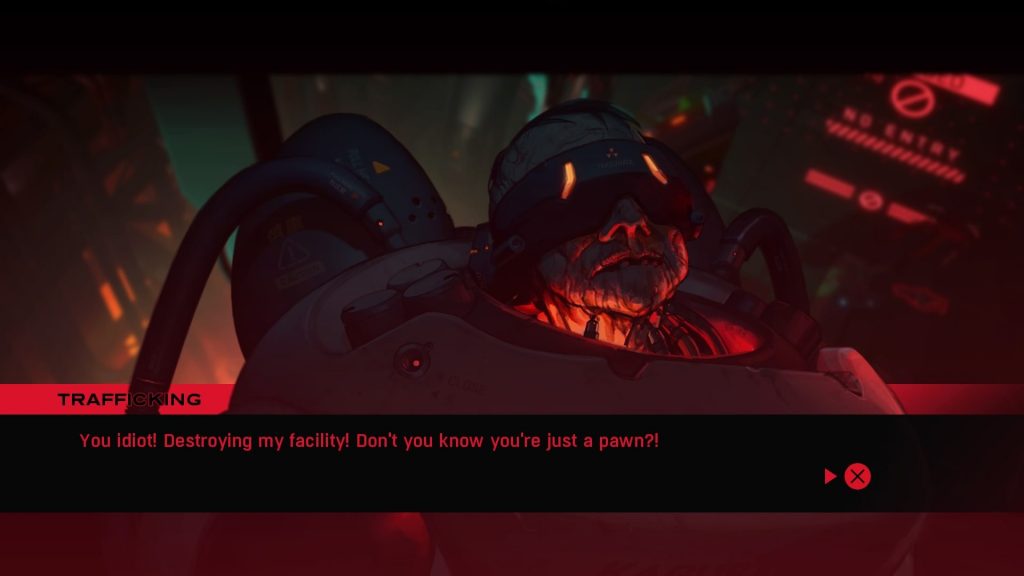 When I first saw RUINER, I assumed it was a twin stick shooter.  Once I started playing, I realized I was only partially right.  RUINER adapts the classic twin stick shooter controls of movement and weapon firing, but the main focus of combat is not actually shooting.  The combat is more of a use of abilities and melee, using quick dodges with a combination of powers you earn.  The game is surprisingly difficult, even on the Easy setting, which I knocked myself down to almost immediately.  RUINER also isn’t challenging in an enjoyable way; it feels too hectic and loose in comparison to the precision it demands.  Often, you won’t learn from your mistakes, only succumb to a random attack without proper understanding.  I found the Easy difficulty setting to be a good balance between mindless shooting and enjoyable action. 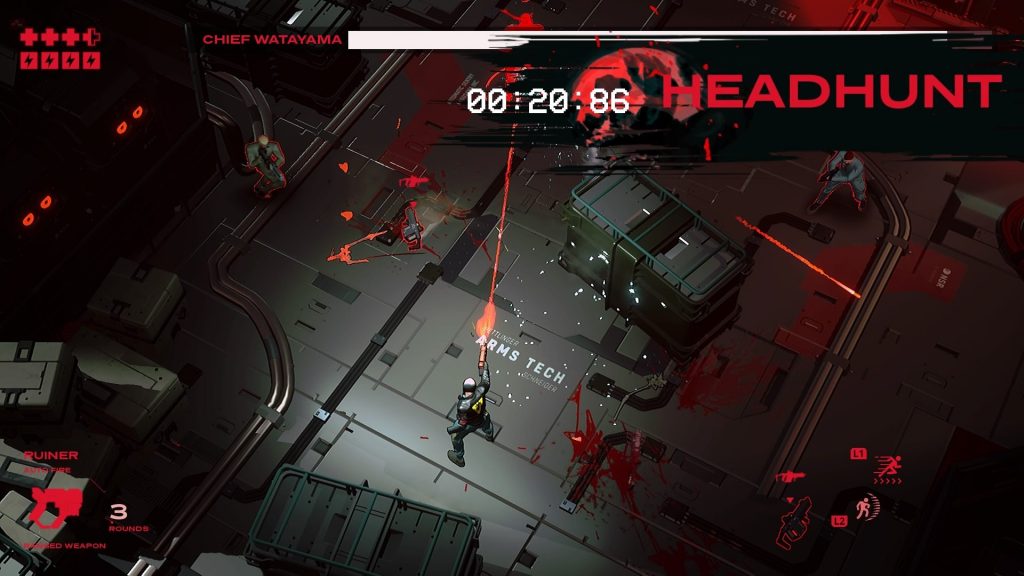 As you kill enemies, open chests, and complete levels, you’ll earn Karma.  Karma function much like experience points in any other game, eventually leveling your character up and allotting you a skill point.  Skill points are spent across a variety of skills, each with multiple versions.  You can upgrade one of three dashes (tied to the left trigger), a handful of grenade abilities with different elemental effects, a handful of passive abilities, and more.  On the surface level, the skill tree and experience mechanics make you feel like there’s a RPG aspect to the combat.  While this is true, you’ll mostly find a comfortable load out and stick with it. 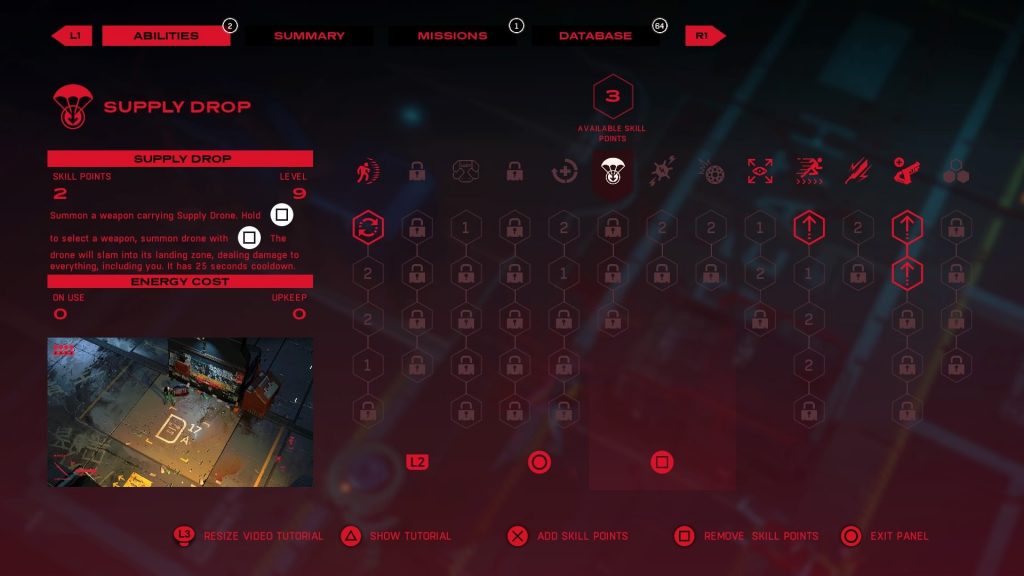 What Goes Up, Must Come Down

RUINER builds up an impressive opening hour, assuming you don’t get smacked down by the difficulty.  Early stages give you optional quests when you take to certain characters, and you feel like the game will be more than just a linear experience.  That quickly devolves into a very linear experience that grows repetitive, and eventually ends in a whimper.

Less than halfway through the game, you’ll feel the monotony start to set in.  The once interesting story becomes vague and repetitive, eventually losing itself along the way.  A late narrative twist attempts to liven things up, but it’s too little to late.  The twist itself is even less impressive, and while you may not call it from the start, you’ll undoubtedly be underwhelmed.  New characters stop being introduced, and you simply fight the same ones over and over. 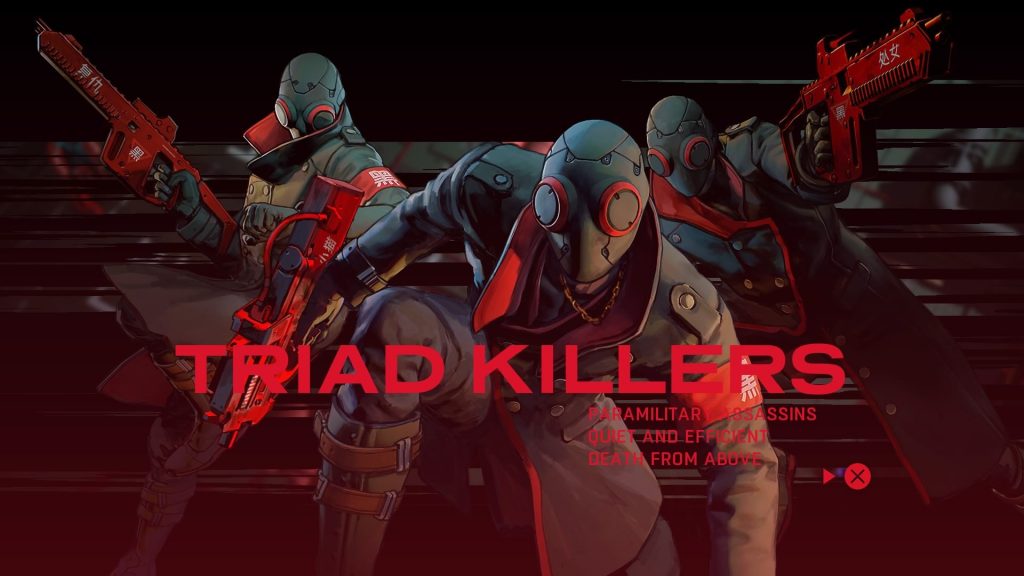 The repetition of the story leads to repetition of gameplay, and they become a co-dependent downward spiral.  Two bosses get reused more than 3 times, and even when one of them changes form, the “new” form is just a recycled enemy type from earlier in the game.  New enemy types are usually interesting in design, but they’ll all quickly blur together.

The Bottom Line on RUINER

RUINER starts off really well, and I found myself enjoying its setting, story, tone, and gameplay.  After a few hours, I feels like all of the fresh ideas have run out, and the game continues recycling content.  As the main narrative attempts to wrap up through disjointed and awkward pacing, you’ll find yourself caring less and less.  The gameplay stays interesting for longer, but eventually succumbs to the same issue.  Repeated bosses and a lack of variety makes the second half of the experience less enjoyable than the opening.  It’s more disappointing than outright bad; a good set up that overstays its welcome and doesn’t know how to end.

At the core of it, RUINER is a competent action game that is greatly enjoyable at times.  The hectic action feels quick and precise, but only when you work out that it’s less about shooting and more about abilities.  However, it’s unable to sustain itself, eventually simmering out.  Considering RUINER is a 4-6 hour game with slight replay value, every minute should count.  The game runs well on a performance level, and I never saw much slow down or noteworthy glitches.  Depending on how much you like the cyber punk aesthetic, RUINER might appeal to you.  Don’t expect too much though; RUINER‘s biggest issue is ambition that it can’t meet.