Although I was a Playstation teen, Legend of Dragoon and I didn’t cross paths until 2017. Released in the final months of the PS1 era (Dec 1999), Legend of Dragoon was supposed to cash in on the JRPG craze sparked by the best-selling Final Fantasy VII. While it couldn’t reach the staggering heights of Cloud and co, LoD still sold well in North America and developed a passionate following as a cult hit. But how does it hold up in 2018?

Simply put, if you’re looking for a retro-styled JRPG, Legend of Dragoonwill deliver a solid experience. It has a few pacing issues and a generic story, but the combat’s additions gimmick is engaging, I enjoyed getting to know the cast, and the pre-rendered environments were memorable. 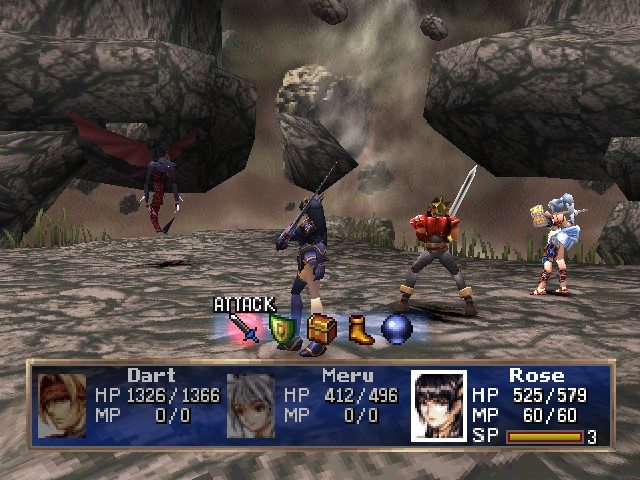 The most unique elements of LoD are the Additions system and the Dragoon transformation. Additions are similar to the timing mechanics of Super Mario RPG, but taken much further. Most of the characters learn several additions ranging in complexity. During the attack animation, the player presses the main button as two square outlines line up. Sometimes the color will change to orange and the player must press Circle to avoid a counter-attack from the enemy. The timing is not rhythmic, but does match the character’s attack animation. The guide squares flash different colors whether the player is early, correct, or late, which is helpful when determining the timing.

Nailing additions increases the damage and also builds SP points, which allow the player to transform into a Dragoon. The Dragoon state is an interesting trade-off. On the positive, it removes status effects (though one effect will prevent transformation), reduces damage taken, and allows magic spells and Dragoon attacks. Dragoon attacks are timing based, similar to Additions. On the negative, a Dragoon cannot use items or Guard, which are the two main forms of healing. The only way to heal in Dragoon form is to cast a healing spell, which are exclusive to a few characters. Characters can build up several levels of SP before transforming, elongating their Dragoon time by one one turn per level. In addition, if all characters in the party transform at once, they go into a Special state. This affects elemental damage and causes the Dragoon that initiated the Special Transformation will automatically perform perfect Dragoon attacks.

Additions are a fun gimmick that engage the player and can heavily influence battles, especially against the tough bosses. Failing additions results in very low damage output and denies you the SP required to transform into a harder hitting Dragoon. The variety of Additions available gives the player a few options to consider. An Addition with less button presses is obviously a better guarantee of success but usually does less damage. Some Additions generate more SP while others focus on damage dealt. They also level up with each 100% successful attack, offering a sense of progression from the low-XP regular enemies.

The Dragoon form’s specific abilities added a straightforward yet thoughtful layer of strategy. Attacks from both sides tend to hit hard and timing Dragoon transformations was often the most important piece of the puzzle. More traditional JRPG battles can become repetitive as each character performs the same role, so I appreciated the way Dragoon made me think with each turn.

After FF VII popularized elaborate battle animations, LoD couldn’t resist making the Dragoon transformations and spells quite long and slow. While they can elevate moments to epic heights, they also get old fast, drawing out already long battles to ridiculous lengths. I usually enjoy retrying difficult boss battles in RPGS, but LoD had me dreading a death, especially if I was already 20+ minutes into a battle. I highly recommend playing on an emulator that allows any kind of speed-up feature (save states are useful in a few areas too). This can shave hours of tedium off your playthrough.

The variety in party members was fantastic. The balance of strengths and weaknesses really had me thinking on the best make-up. A few characters jump out as optimal choices, but I’m sure you could get through the game with any combination.