Another unique quirk sees a character gaining 10% of their health when guarding. It’s quite useful and offers far more benefit to guarding than usually seen in RPGs. However, when coupled with the limited inventory space for healing potions, this greatly encourages players to end a battle against a weaker enemy by tediously guarding to gain free healing. Fortunately, I rarely felt the need to do scam heals, but some players might not be able to resist. 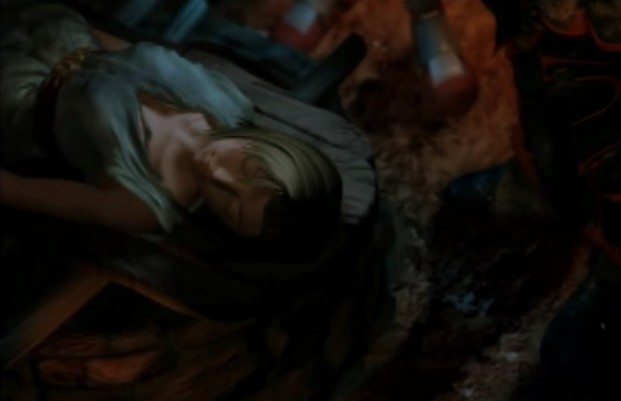 The story was inconsistent for me. I enjoyed the set-up. Dart started with a sense of purpose and urgency. Rose was mysterious and intriguing, and Shana was a solid friend/potential love interest. Most character introductions to the party were fairly well done too. I’d say the character’s personalities and interactions within the party were the strongest moments. The gang was varied and had great banter. They really felt like a rag-tag team banding together for a larger purpose.

The story dropped off as the greater purpose was revealed. From the halfway point on I rarely cared about the main plot. It was an overly convoluted explanation of a simple MacGuffin. Knowing the characters needed a device to stop an entity is enough, sub-dividing it into several pieces added nothing but tedium. Perhaps it was just an easy way to elongate the journey, but it could have been more streamlined.

The lore of Winglies, Dragoons, and the rest was much more interesting than the main goal. How the different race’s histories intertwined stuck with me much more than which Moon piece needed to be brought to which sacred area.

A JRPG needs distinct towns to visit and LoD delivers strongly in that department. The towns were often large, distinct, and vibrant. The layouts made them feel lived in and functional. Water sources flowed in logical areas, providing life and sometimes transportation. There were uptowns and downtowns with different feels. A bustling market felt exotic and busy, complete with a bartering salesman. The mini-game area perfectly captured the feeling of a giant muddy track that would have been used for those kind of events. The architecture and city planning all felt believable and intriguing. A real highlight of the game.

LoD took the music in a different direction than the usual JRPG fare. Instead of epic orchestral arrangements dominating the score, Dragoon often uses jazz and rock. The bass and percussion is usually the star, setting up funky grooves that stayed fresh during my +60 hours. There was a nice variety in boss tracks although one heavily rips from FF VII’s main boss theme.

Overall the score felt fresh for the genre, perhaps the western sounds contributed to the game’s primary success in North America.

The character’s yell out their Additions when successfully completed. The inflection is often awkward which may have been caused by matching the Japanese audio. After reading a character’s voice in your head (or out loud as I did for the stream) it was often jarring to hear what they sounded like during additions. Even more jarring are the rare times the characters speak in CGI scenes. The acting is usually terrible, with a real low-light coming from Rose’s “It cannot be!”. The CGI lines come off so poorly I wondered if they used different actors for the same character’s additions and scenes.

Bad voice acting was the norm for early PS1 games, but after Metal Gear Solid released in 1998, the bar had been raised.

There’s a lot here to like for fans of classic JRPGs. The towns are interesting to explore, the cast is memorable, the battle system is strategic with challenging boss fights, and there is a ton of grinding/progression for those that seek it, although it never felt necessary. I wasn’t even able to max out the Additions on one of my main characters before the final confrontation. The variety of party members, additions, and optional content rewards multiple playthroughs, which makes it a real shame there isn’t a New Game + feature.

I can see why the fan base for Legend of Dragoon is so passionate. To play this as one of your first RPGs in the late ’90s would have stuck with me as well. It has a few pacing issues and generic plot points, but overall, Legend of Dragoon is a fine JRPG for those seeking a classic experience.

The Elder Scrolls Online: Greymoor Review – Creatures of the Night

Mathew is a huge fan of Space, Strategy, and Shadowrun (Genesis version is #1). When it…
View Posts