When I first heard PlayerUnknown’s Battlegrounds — or PUBG — was coming to Xbox One, my first thought was, “Cool! So many more people can experience this awesome game!” My second thought was, “But how will the controls work?” Today, developers at PUBG Corp. have answered this popular question and revealed the control layout for PUBG‘s Xbox One version.

PUBG is a multiplayer shooter with controls for a wide range of commands such as picking up gear, switching between weapons, throwing grenades, swimming, crouching, going prone, jumping, consuming medicine, and controlling vehicles. It seems like a lot to cram onto a console controller, but they did the damn thing. Check out the basic Xbox One control scheme below. 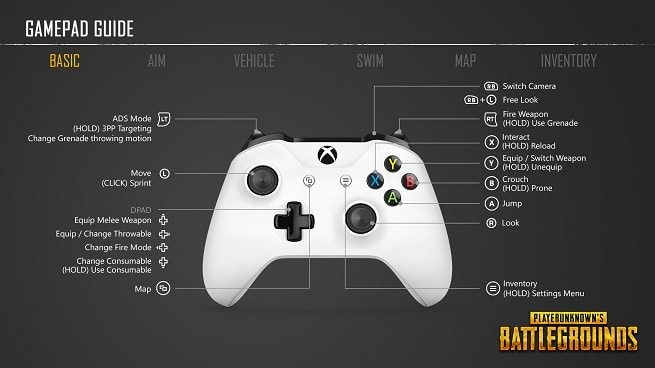 “Translating these mechanics down to the Xbox One controller has been a challenge,” said Mike Nelson in an Xbox news post, “but the team at PUBG Corp. — with support from the Xbox Advanced Technology Group and The Coalition, developers of the Gears of War franchise — believe they’ve found the right balance between giving players enough flexibility to survive in the hostile battleground and to effectively manage in-game equipment on the fly.”

Acclimating to the Xbox One controls might be a challenge at first, as many buttons serve dual purposes — clicking the button will preform one action, while holding the button will preform another. For example, the right trigger, which is commonly used for firing weapons in shooter games, fires the weapon if you tap the button but will throw a grenade if held down. The above control scheme is for default gameplay, but there are other layouts for aiming, driving a vehicle, swimming, navigating the map, and perusing your inventory.

PlayerUnknown’s Battlegrounds is available now for PC via Steam Early Access and releases tomorrow, December 12th, on Xbox One through the Xbox Game Preview service.