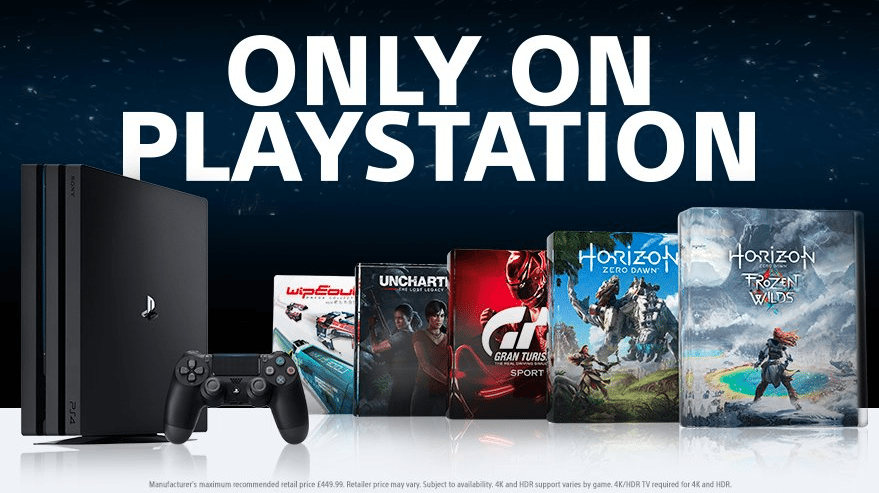 The Xbox One X, Microsoft’s new powerhouse console, just released today, November 7th. In a less-than-subtle jab at the Xbox One X, Sony has revealed a bundle of its own 4K console, the PS4 Pro. The bundle offers the console and several PS4-exclusive games, all for the same price as the X.

Purchasing an Xbox One X will cost you $499.99 / £449.99 — a hefty chunk of change that has sparked some controversy in the gaming community. Microsoft claims it is the most powerful console in the world, saying it’s 30% faster than the original Xbox One. It also packs a 6 teraflop GPU, compared to the PS4 Pro’s 4.6 teraflops. Regardless of the power, it costs a lot of money, which a lot of people don’t dig.

Cue Sony, who revealed the “Only on PlayStation” bundle on PlayStation UK’s official Twitter today. The bundle comes with the PS4 Pro and a controller, Wipeout Omega Collection, Uncharted: The Lost Legacy, Gran Turismo Sport, Horizon: Zero Dawn, and The Frozen Wilds, the new expansion for HZD. That’s quite the score. A 4K console, four console-exclusives, and one major expansion all for £449.99, the same price as the Xbox One X in the UK.

The tweet did not mention Microsoft’s new console in the announcement, but the title of the bundle — Only on PlayStation — plus making reveal on the Xbox One X’s release day and the winking face next to the price point? Seems like a pretty obvious reference to us. However, Sony wasn’t entirely provocative regarding the Xbox One X on the day it released. Although they did announce the PS4 Pro bundle, the official PlayStation Twitter also told Microsoft, “Congrats on the big day!” in reply to Xbox’s launch tweet.

The Only on PlayStation PS4 Pro bundle seems to be available only from retailer GAME and is currently out of stock. Not surprising since this deal offers so much in one package. We’ll keep you updated on the latest.