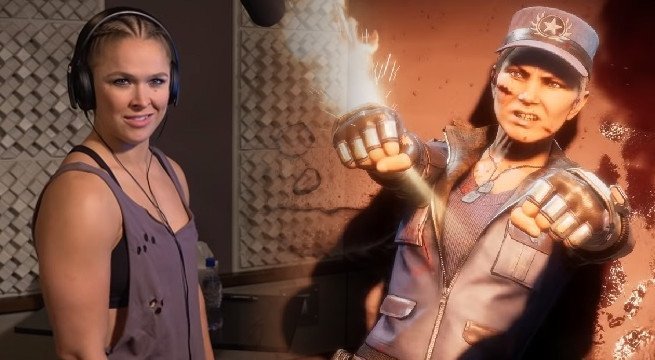 This afternoon NetherRealm Studios held a Mortal Kombat 11 showcase event, and UFC champion an Olympic medalist Ronda Rousey was invited. It was revealed during the event that Rousey will voicing the iconic Sonya Blade.

“I’ve been a lifelong Mortal Kombat fan, and Sonya Blade was the first kick-ass, female video game character that I related to,” Rousey said. “Now I get to voice her in Mortal Kombat 11. It’s a dream come true to be a part of the Mortal Kombat franchise that I grew up playing.”

In the trailer Rousey revealed that she first played Mortal Kombat as a kid, when one of her mother’s college students showed the game to her. She was able to button-mash her way to victory using Raiden, and the rest is history.

Mortal Kombat 11 is scheduled to launch on the PlayStation 4, Xbox One, Nintendo Switch, and PC on April 23. Anyone who pre-orders the game will unlock Shao Kahn as a bonus character. If you’re dying to go hands on, NetherRealm also announced that everyone who pre-orders Mortal Kombat 11 will have access to the closed beta, which kicks off on PlayStation 4 and Xbox One on March 28.

We think Rousey makes a perfect Sonya Blade, and we can’t wait to hear more of her work in the story mode when Mortal Kombat 11 launches this April! In case you missed it, you can catch the Mortal Kombat 11 Fatalities trailer right here.