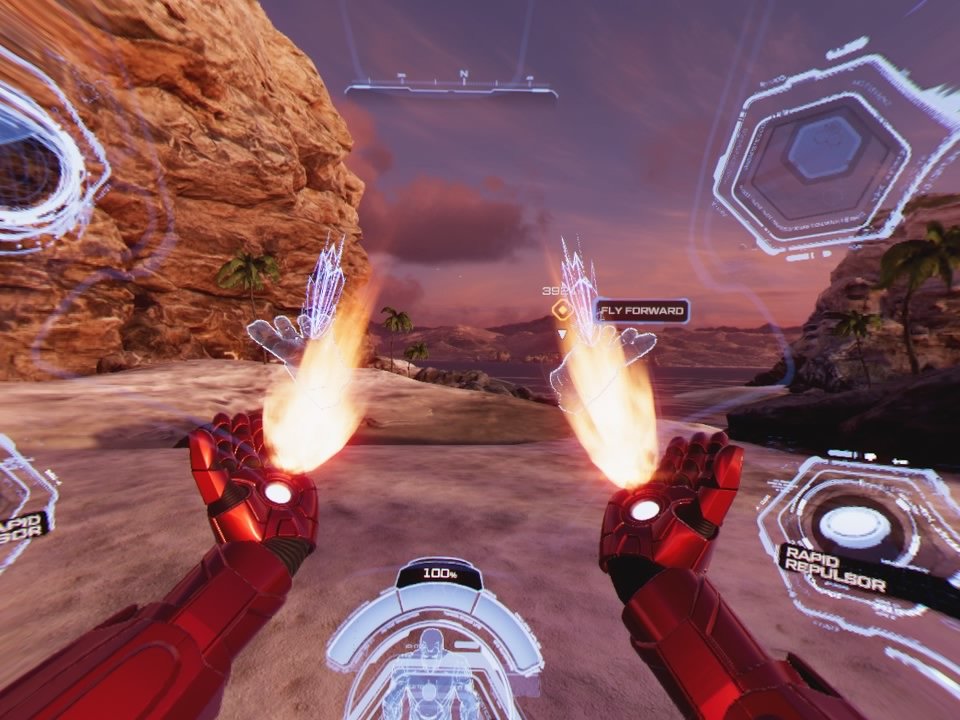 Marvel’s Iron Man VR is a virtual reality action game based on the iconic Marvel superhero, available exclusively on PlayStation VR. Developed by the relatively new studio Camouflaj (with help from developer Darkwind Media), Iron Man VR is part Tony Stark simulator and part superhero fantasy fulfillment. As you speed around the skies in the classic Iron Man suit, you’ll shoot down robotic foes, dodge explosives, and even fire off a unibeam or two. It’s not all gunfire and explosions however, as a few fun interactions and story sequences focus more on the human side of the Stark/Iron Man persona. After a few unfortunate delays, Iron Man VR is finally here and ready to let you live out your ultimate Iron Man dream. That said, does this PSVR-exclusive live up to the massive character that is Iron Man? Let’s see if Iron Man VR is an entertaining achievement in technology, or a simple tin can to kick around for fun.

Although Iron Man VR contains all your favorite Iron Man characters, including Pepper Pots, FRIDAY, and more, the plot itself is wholly original. If you’ve seen any of the Iron Man movies or read a single Iron Man comic, these characters will feel familiar. Tony Stark, the billionaire arms-dealer playboy turned heroic tech-mastermind, is a snarky and often humorous protagonist who is about as humble as a billionaire would be. His wife-to-be, Pepper Pots, is the brains of the operation, managing Tony’s finances and ensuring he doesn’t blow his own head off with experimental weaponry.

In Iron Man VR, Tony Stark attempts to live a relatively peaceful life after leaving the weapon manufacturing business. Although his fortunes were earned by helping countries wipe each other off the map, Stark attempts to leave his past behind for greener pastures. Unfortunately, after just a few years, his mistakes come back to haunt him in the form of Ghost, an unrelenting supervillain. Ghost intends to make him pay for his past transgressions, through pain and suffering the likes of which Tony has never seen. As havoc breaks out around the globe, Stark must suit up again and fill his heroic role.

Generally speaking, the story in Iron Man VR is what you’d expect from a mid-tier superhero title. None of the characters are played by the original actors from the Marvel films, so if you’re expecting Robert Downey Jr in the leading role, you’ll surely be disappointed. Despite this, the entire cast does a decent enough job with their dialogue, manifesting honest emotion where it counts. Unfortunately, there’s just nothing all that inventive or exciting about the narrative in Iron Man VR. It’s a story that checks all the boxes in the “big-budget superhero story”, lofting big, philosophical concepts but never committing to them. Rather, the plot takes the easy way out several times, leading to a wholly predictable story.

There are still some really cool narrative moments in Iron Man VR, but you’ll likely see them coming, because you’ve seen most of them before. Additionally, the game occasionally veers towards the horror genre, guiding players through creepy and dimly lit environments. However, none of these sequences are particularly frightening, but instead are slow-moving sequences dotted with annoying jump-scares. It makes sense in context – if you’re going to have a villain called Ghost, you might as well get creepy – but falls apart in execution. The “scary” sections are few and far between, but they’re at key points in the game, causing some awkward tone clash and pacing issues. Overall, if you’re a fan of the Iron Man character or the Marvel flicks, you’ll find the story good enough. That said, don’t expect anything better than what you’ve already seen on the big screen.

Story content aside, it’s the flight-based action that’s the main draw to Iron Man VR, for obvious reasons. While flying games are somewhat common in the VR marketplace, few of them are as high-budget or bombastic as Iron Man VR. The game is played using two PlayStation Move controllers, as you must navigate the skies using thrusters on the palms of your hands. Flying feels fast and unrestricted, so you might want to start the game sitting down. My first few minutes with the game were spent in absolute glee, flying around the tutorial space and appreciating the intuitive flight mechanics. Iron Man VR works well in both sitting and standing positions, but after getting the hang of things, I mostly preferred playing while standing. PSVR veterans will have no problem acclimating to the lightning-quick movement in Iron Man VR, but there are a handful of sensitivity options for players who experience motion sickness.

When you don the Iron Man suit, you’ll usually be entering into combat scenarios, where you’ll face off against a variety of enemy drones. By default, you’re able to utilize your quick-fire repulsor blasts to shoot down enemies, as well as auxiliary weapons like homing rockets and cluster bombs. There’s also a satisfying “rocket punch” melee mechanic, letting you home in on enemies both in the air and on the ground. You can swap out various weapons and thruster modifications in the Stark garage, crafting two unique loadouts to take into battle. New auxiliary weapons and bonus modifications can be purchased using research points, which are awarded to you for performing well in each mission. You can pick up extra research points by completing additional flight challenges, which provide a boost of replayability.

Overall, the action is fun, frenetic, and at times, overwhelming. Running on an original PlayStation 4, the frame-rate can dip pretty hard at times, especially when the screen gets populated with more than a handful of enemies. The graphical clarity ranges from razor-sharp to occasionally blurry, resulting in an uneven visual experience. When you factor in the flashing lasers, excessive HUD, and quick movement, Iron Man VR can feel very busy at times, but not in a good way.

However, in the slower, indoor segments of the game, everything looks perfectly fine. Luckily, my PlayStation VR tracking worked just fine throughout the entire experience, providing smooth and responsive controls. If anything, Iron Man VR is an example of the limitation of current-gen hardware as they pertain to smooth VR gameplay. However, despite the occasional technical hiccups, Iron Man VR is consistently fun, action-packed, and makes you feel supremely badass.

The Man Inside the Suit

Although Iron Man VR could’ve been nothing but lengthy in-suit battles and still have been plenty of fun, but thankfully the action is broken up by small out-of-suit scenes. Playing as regular ‘ol Tony Stark, you’ll explore various rooms in the Stark Mansion, including Tony’s bedroom, his poolside overlook, the garage, and some other fun places we won’t spoil. While you can’t walk around these areas in free-roam, there are several points-of-interest you can jump to, interacting with various items and mini-games. For example, I spent a few minutes eating everything possible out of the fridge in the kitchen, lifted some weights, and even played a few rounds of arcade basketball.

While a decent portion of these out-of-suit interactions are only entertaining on the surface (with no real replayability to speak of), they help expand the game’s unique lore and increase immersion. After twenty hectic minutes of blowing up drones and flying at blistering speeds, it’s fun to sit back and catch your breath with something less chaotic. When you’re passing through your environment at hundreds of miles an hour, it’s easy to ignore the fun details. Similarly to Batman VR (developed by Rocksteady Studios), these smaller, more playful interactions helped me bond with the character and the world.

Iron Man is a huge character in pop culture, there’s no contesting that. Especially after the recent events in the Marvel Cinematic Universe, Iron Man has become one of the most popular superheroes of all time. It makes sense then, that when choosing a Marvel superhero for a standalone VR title, Sony and company would pick the suavest metal boy of them all. If you’ve ever seen an Iron Man movie or simply fantasized about being a superhero, Marvel’s Iron Man VR is lots of fun. When the action is as raw and enjoyable as it is in Iron Man VR, it’s easy to forgive some of the mistakes.

That said, the weaknesses in Iron Man VR are still there and prevalent. While the game will undoubtedly become smoother and more polished as new updates roll out, it still feels like it belongs on a PlayStation 5. The story isn’t exactly gripping, even though it tries to be. However, as long as the idea of flying around in the Iron Man suit sounds appealing, Iron Man VR will provide hours of fun. Not accounting for load times and breaks, I was able to wrap up the story chapters in around 8 – 10 hours. If you’re not satisfied after that, there are additional flight challenges and combat missions to pursue, as well as a variety of suit upgrades to purchase. While Iron Man VR might not be the killer app for PSVR owners, it’s still a rowdy good time with some expertly crafted gameplay.