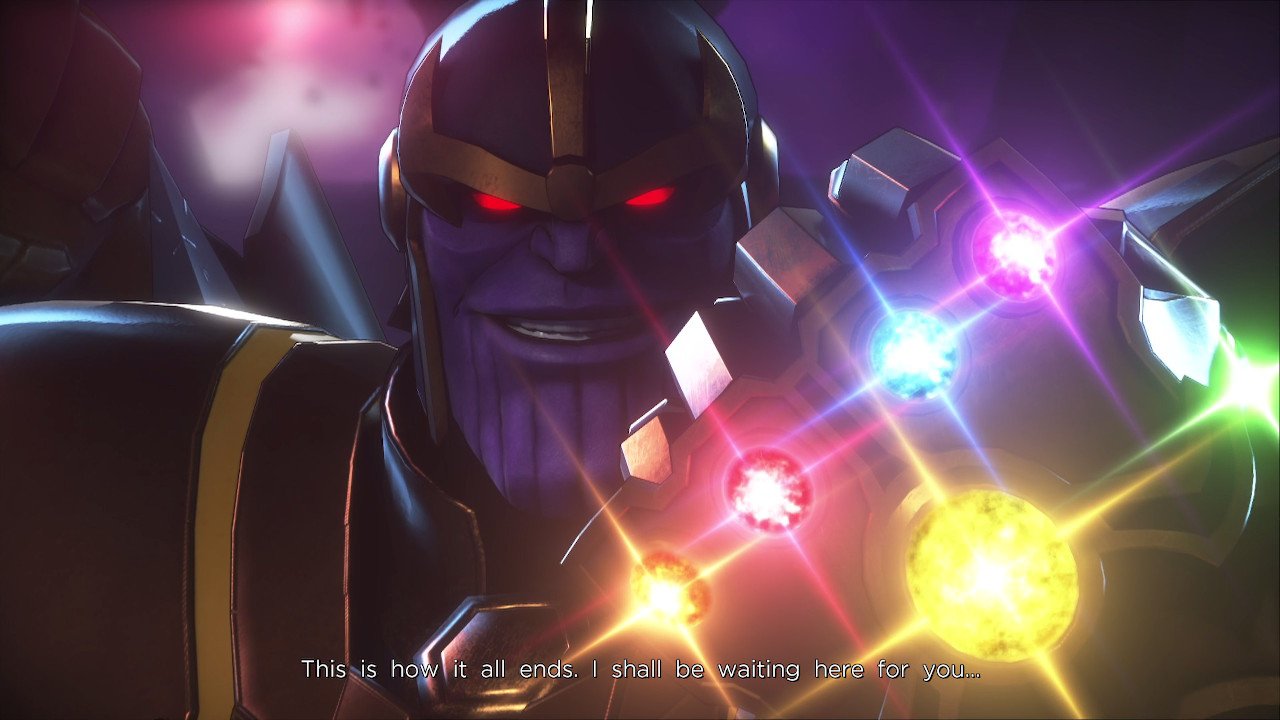 Marvel Ultimate Alliance 3: The Black Order is the long-awaited sequel that features your favorite Marvel-brand superheroes fighting their way through hordes of enemies in a brand-new, original narrative. The previous game, Marvel Ultimate Alliance 2, released over 10 years ago in 2006. Since then, pop culture has exploded with superhero-mania, as the Marvel Cinematic Universe film franchise has quickly become the trendiest thing since sliced bread. Marvel Ultimate Alliance 3: The Black Order lets you control a huge cast of superheros, ranging from memorable film protagonists and villains to generally underrated comic characters. Either solo or with a few friends, you’ll fight against the forces of evil as you attempt to save the world in a superhero story packed with action. That said, is it any fun to play? Let’s see if this decade-overdue sequel is an Avengers: Endgame level of success, or more like a hastily written one-shot.

Your epic superhero adventure begins in the vast expanse of space. You’ll start off playing as the beloved cast of Guardians of the Galaxy, including Star-Lord, Drax, Gamora, Rocket Racoon, and Groot. While tracking an exceptionally strong cosmic energy signal, the crew find an abandoned Kree warship. After boarding it, the Guardians find themselves in hot water with the villainous Proxima Midnight, a high-ranking member of the Black Order. Led by the titan Thanos, The Black Order exist to cause chaos in the galaxy and reap the rewards. The Guardians and Proxima Midnight scuffle over the Infinity Stones, six immensely powerful cosmic artifacts with untold power. Before long, the Guardians are met by other memorable faces, including the Avengers, Spider-Man, and many more. Together, the teams set out to recover the Infinity Stones and take down Proxima Midnight, Thanos, and the rest of the Black Order.

For the most part, dialogue is well-written and voice acted well by the entire cast. There are a few performances that are stronger than others, but I was generally pleased with how everyone voiced the large cast of beloved characters. Like Avengers: Endgame, there are countless characters to see and meet, but they’ll usually only stick around for a few levels. The freedom to play as whoever you want is awesome, but it comes at the cost of a focused narrative. With such a large cast to integrate into the story, a lot of stuff gets breezed over. Certain characters like Iron Man, Captain America, and Captain Marvel show up more often than others, but a lot of characters are narrative blips in the overall plot.

The story in Marvel Ultimate Alliance 3: The Black Order should be tons of fun for any fan of the Marvel universe. Without spoiling much, you can expect to see all of your favorite characters from recent Marvel movies (Black Panther, The Avengers, Guardians of the Galaxy), as well as other Marvel properties like the X-Men, Inhumans, and more. Generally speaking, the multi-dimensional story does a great job of bringing most of the beloved Marvel characters together, along with a few unexpected surprises. I can’t say that the narrative itself is exceptionally riveting; it’s simply another tale of the Infinity Stones and their massive power. However, the constant introduction of familiar characters and fan-favorite settings and worlds keeps things fresh when the story stagnates.

The gameplay in Marvel Ultimate Alliance 3 is a bit more simplistic than past entries, but it’s a pleasing mixture of easy-to-learn combat and light puzzle-solving. You will always have four characters to play as, and you can swap between them at any given time. The game plays from a mostly isometric and top-down perspective, giving you a full view of the unveiling mayhem. Levels are laid out in a linear fashion, with a few secret areas and hidden collectibles scattered about. Progressing through Marvel Ultimate Alliance 3 is usually as simple as defeating every enemy in your path, taking on various bosses along the way. Apart from a few simple puzzles that halt your progress, a majority of your time in the game will be spent fighting enemies with a slew of cool attacks.

Each character has unique attacks, special abilities, and an extreme alliance attack. Some characters can fly, unleashing a flurry of projectiles, while others are more brutish, offering high damage attacks and major health pools. Learning the differences between characters and finding your favorites is one of the best parts of Marvel Ultimate Alliance 3.

New characters are unlocked at a steady pace, as the story winds through the various threads of the Marvel universe. There’s always someone new to try out, and with a variety of team synergy boosts, you’ll constantly find new ways to improve your four-man party. As you use a specific character in play, they’ll gain experience and level up. New abilities are unlocked at various level milestones, giving you something consistent to work towards. Abilities can also be enhanced and upgraded with a variety of collectible currencies. Generally speaking, the combat is simple to understand and the game is easy to play, but the upgrades and various leveling systems is where Marvel Ultimate Alliance 3 gains its complexity.

The Next Level of Hero

In addition to leveling up your heroes’ super moves, you can also enhance them with “ISO-8” crystals. These colored crystals are often earned by locating hidden chests or defeating bosses, and can be equipped onto characters for a variety of buffs. Crystals can be deconstructed and improved within a separate menu, but I found crystals mostly optional. On higher difficulties, properly equipping your characters with buffed crystals will probably make a noticeable difference, but they’re not essential for a casual playthrough. That said, they are still worth checking out, as some of the rarer crystals provide huge benefits.

As you defeat enemies and clear story levels and challenges, you’ll earn enhancement points and credits. In tandem, these two currencies can be used to unlock various passive buffs in the Alliance Enhancement screen. By spending a handful of enhancement points and credits, you can unlock extra health, stronger defense, more experience points, and various other bonuses. These boosts are locked behind a variety of nodes, spread across large hexagons. As you unlock nodes and fill out the hexagon, you’ll unlock more hexagons with nodes focused on various stats. There are plenty of buffs to unlock, and since these boosts affect your entire team, you’ll want to prioritize unlocking every node available.

Marvel Ultimate Alliance 3: The Black Order can be played either single-player or with a group of up to four players, utilizing either online or local cooperative play. There’s some positives and negatives to both play styles, butthis is a game that is better played with friends. During solo play, you’ll be able to switch between characters effortlessly. This is fun if you’re indecisive and like to play as everyone, but it’s much harder to coordinate with computer-controlled teammates. Conversely, online multiplayer is decent fun, but occasional connection woes and the lack of matchmaking puts local multiplayer as the clear winner.

Like any other action game that revolves around beating up waves of enemies, the chaos is always more enjoyable with a pal. Although I enjoyed the freedom of solo play, I had much more fun smashing a slew of Marvel goons with a friend. In addition to a strategic advantage, cooperative play also makes “synergy attacks” much easier. These extra-powerful attacks are activated when two characters use certain abilities at the same time. While possible to pull off in solo play with a quick button press, synergy attacks are much more exciting when performed with a pal in moments of combat synchronicity.

To Infinity and Beyond

While playing the main story mode, you’ll encounter rifts in space time that lead to Infinity Trials; challenging fights or bosses that yield exceptional rewards. You’re free to take on these challenges as you discover them, or complete them later in the Infinity menu. These tough challenges are often a good way to boost your party’s experience level and gain credits, and provide a nice way to enjoy Marvel Ultimate Alliance 3 in smaller bursts.

Infinity challenges are often either wave-based enemy battles or boss re-fights, wherein only specific tactics will ensure success. Each challenge has a three-star ranking system, with rewards that reflect your performance. I had a decent time smashing through hundreds of enemies, but found that most boss fights were not as exciting the second time through. This, coupled with modifiers that make it harder to do damage, makes some of the infinity challenges more annoying than enjoyable.

The Bottom Line on Marvel Ultimate Alliance 3: The Black Order

Marvel Ultimate Alliance 3: The Black Order is a decently fun action game with some simple role-playing elements, which should be fun for fans of superheros and the Marvel Cinematic Universe. In comparison to the previous two Ultimate Alliance games, The Black Order feels more simplistic and easy-to-learn. This makes it welcoming for newcomers, but occasionally underwhelming for veteran players. The main story mode will take you roughly 6 – 12 hours to complete, depending on your difficulty level chosen and how much time you spend on side activities.

I had a good time playing Marvel Ultimate Alliance 3 cooperatively with a friend, and can confirm that multiplayer is the best option when considering a playthrough. If you have a squad of friends eager to beat up some baddies and save the galaxy, Marvel Ultimate Alliance 3 fits that bill nicely. However, the lack of character customization, the awkward difficulty spikes, and repetitive challenge levels can bring the experience down. While it doesn’t reach the heights of its predecessors, Marvel Ultimate Alliance 3: The Black Order is still a fun and enjoyable Nintendo Switch exclusive with plenty of superhero action.