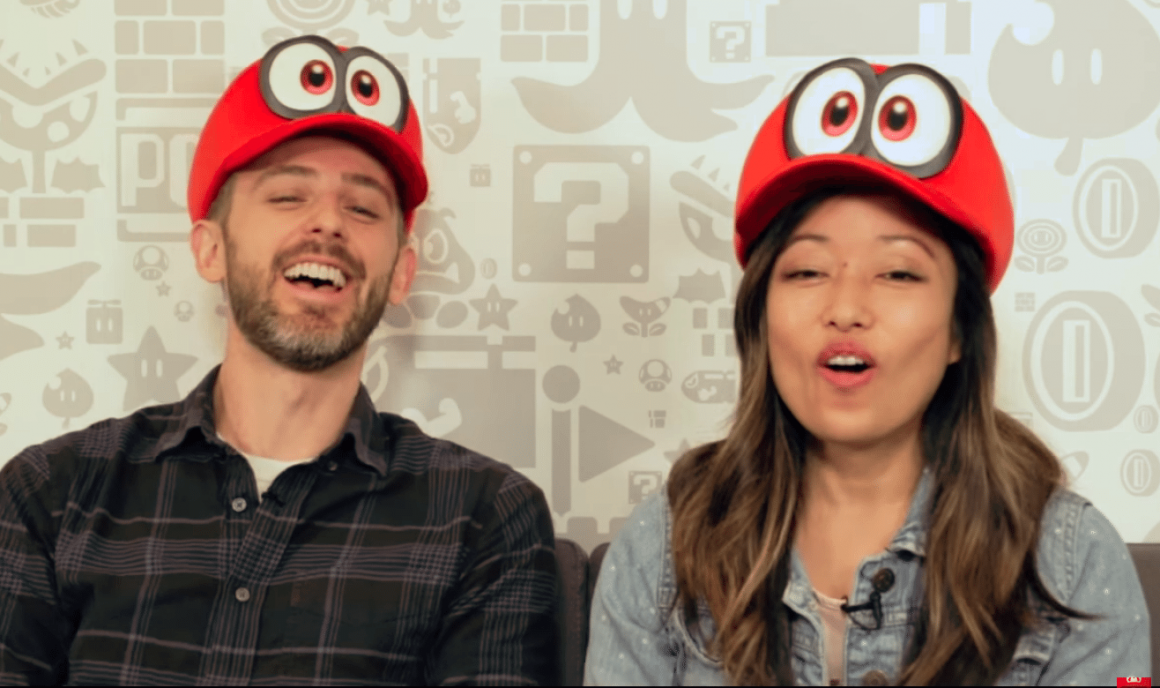 Super Mario Odyssey is almost here, I finally purchased my Switch and feel the hype volcano brewing inside of me. Breath of the Wild was a wonderful experience, hearkening back to the excitement I felt as a much younger gamer, rather than the cynical, soulless husk I’ve become (thanks microtransactions!).

The show Nintendo Minute, on Nintendo’s official YouTube channel recently posted a gameplay video demonstrating how co-op will function. They went with a raw, real-life scenario. That’s right, a single joy-con each, just like the first commercial promised we would all be fine with. No Pro Controller in sight.

The hosts Kit and Krysta – dressed in gigantic Cappy caps – tease that this co-op experience might be the end of their working relationship.

In co-op mode, Cappy floats a little higher off of Mario’s head and the second player is able to move the hat independently. The player controlling Mario can still chuck Cappy the regular way when desired.

Krysta moved Cappy around, picking up coins and cleaning up toxic goo, very similar to cleaning up in Super Mario Sunshine. She also demonstrated that a quick button press will automatically return Cappy to Mario’s skull.

They chucked Cappy onto a flying telescope to take a better look of the area. An airship flew high in the sky, reminding me of Breath of the Wild’s informative vistas.

Cappy isn’t just limited to flying and whacking, as Krysta showed off his ground-pound AOE effect.

In single-player mode, Mario cannot throw Cappy while possessing an enemy. In co-op however, the second player can still manoeuvre as normal, providing a big advantage.

We’ll be streaming Super Mario Odyssey on our YouTube channel the moment it’s released and will have streams this week taking a look back at previous Mario titles. Let us know how you think Odyssey will be received and what your current favorite Mario is. Mine is SMB3, but I’m hoping to have a new favorite very soon.