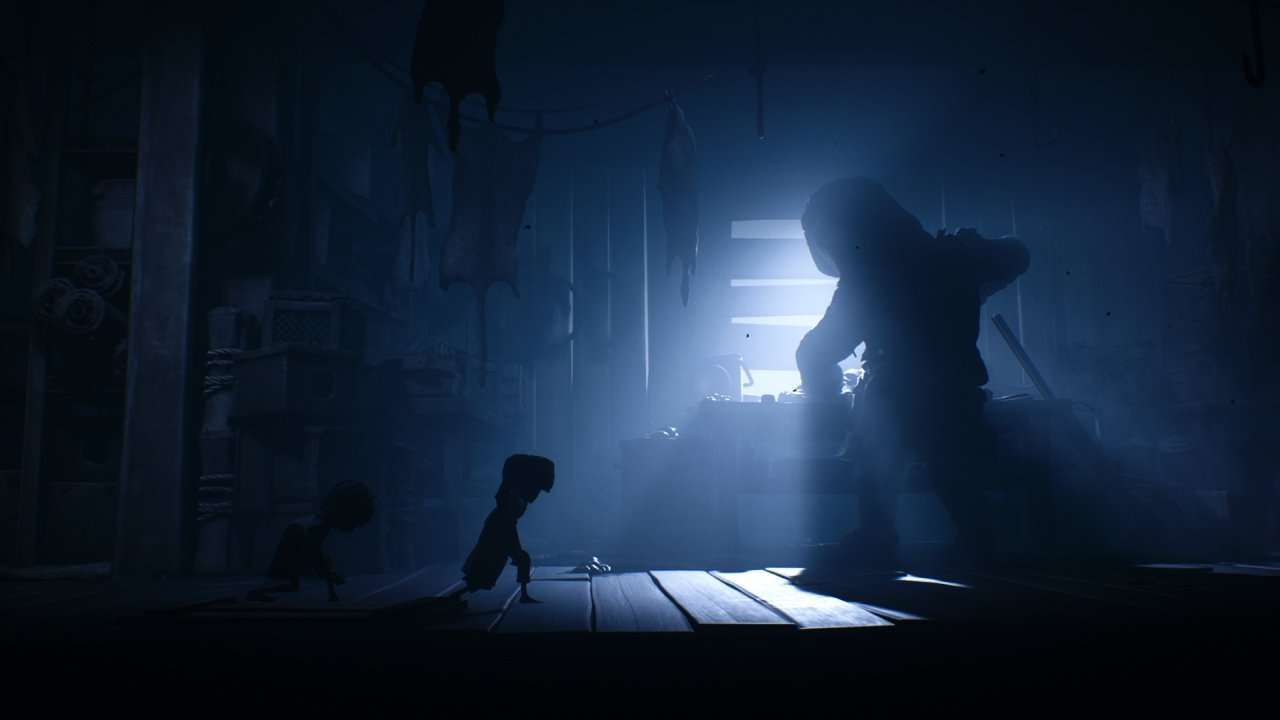 In Little Nightmares 2 you play as Mono, a tiny boy trapped in a deadly fantasy world full of nightmarish creatures. At the start of the game, you wake up in the woods, startled into reality by a series of mystifying dreams. After navigating through a thick layer of leaves and bear traps, you arrive at a crumbling hunter’s shack, with a gigantic figure idly butchering his latest kill. In the basement, you discover Six, the equally small protagonist from the original game. From there, the duo team up and attempt to escape the hunter’s grasp, beginning a bleak but charming journey through an enormously evocative world.

The story in Little Nightmares 2 is almost entirely derived from the environment and set-piece moments throughout the game. There is no spoken dialogue, so a lot of the narrative is inferred, slowly revealing itself as you progress through each chapter. Luckily, the absence of a traditional plot helps the mystery of Little Nightmares 2 shine. Without much context to base your expectations on, you’ll never be sure of what’s coming next. This results in an anxiety-inducing and remarkably suspenseful trek, that’s both brief and satisfying.

If you played the first Little Nightmares, you’ll be comfortable with the basic gameplay in the sequel. A lot of the game involves sneaking through trap-invested environments, hiding in the shadows from monsters, and navigating tricky platforming sections. Due to Mono’s small size, exploring levels is continuously interesting, offering an experience that feels like a depressing version of the 1997 movie The Borrowers. The game is broken up into several chapters, with each one focusing on a twisted and terrifying location. You’ll sneak your way through a demented school, a filthy hospital, and more.

The level design is mostly linear, but you’ll occasionally run into locked doors that require keys to progress. Keys are most often found by solving puzzles, many of which utilize the few new abilities Mono possesses. In a step up from the original Little Nightmares, Mono can now grab, throw, and swing various items, resulting in some clever puzzles. You’ll also use items to defend yourself from time to time, making the danger a bit more palpable than before. Six also helps out where she can, helping to boost Mono to higher platforms and lending a hand during certain puzzles.

Overall, the gameplay in Little Nightmares 2 is engaging but reserved, letting the atmosphere and mood sit at the forefront. Puzzles are rarely difficult, and sections with combat are simple enough to complete after a few tries. Little Nightmares 2 is more about experiencing the deranged, fairytale-like world at a decent pace than gameplay challenge. You’ll definitely die a few times as you work out some tougher sections, but for the most part, Little Nightmares 2 is a game that doesn’t require a whole lot of inherent gaming skill to enjoy.

The Bottom Line on Little Nightmares 2

For fans of the horror genre and atmospheric adventure games, Little Nightmares 2 is a thrilling treat. The world-building is excellent, the music is haunting, and the gameplay is simple and easy-to-understand. A unique art style that blends together cutesy, cartoonish characteristics with disturbing and morbid sensibilities helps the game stand out in the sea of mid-tier-priced platformers. Better yet, Little Nightmares 2 is legitimately creepy, with inventive creature designs and a strikingly intense atmosphere.

That said, Little Nightmares 2 isn’t a perfect package. The game will only take you around 5 hours to complete, and with only a handful of collectible hats and “glitching remains” to find, there’s not much in the ways of replayability. With a big chunk of the gaming containing two characters working together, it’s also surprising that Little Nightmares 2 doesn’t include some form of local cooperative play. Fortunately, most of these issues are easy to forgive, as the game remains interesting and spooky from start to finish. Thanks to some memorable monsters and the refined gameplay, Little Nightmares 2 surpasses expectations and is a treat for fans of all things spooky.