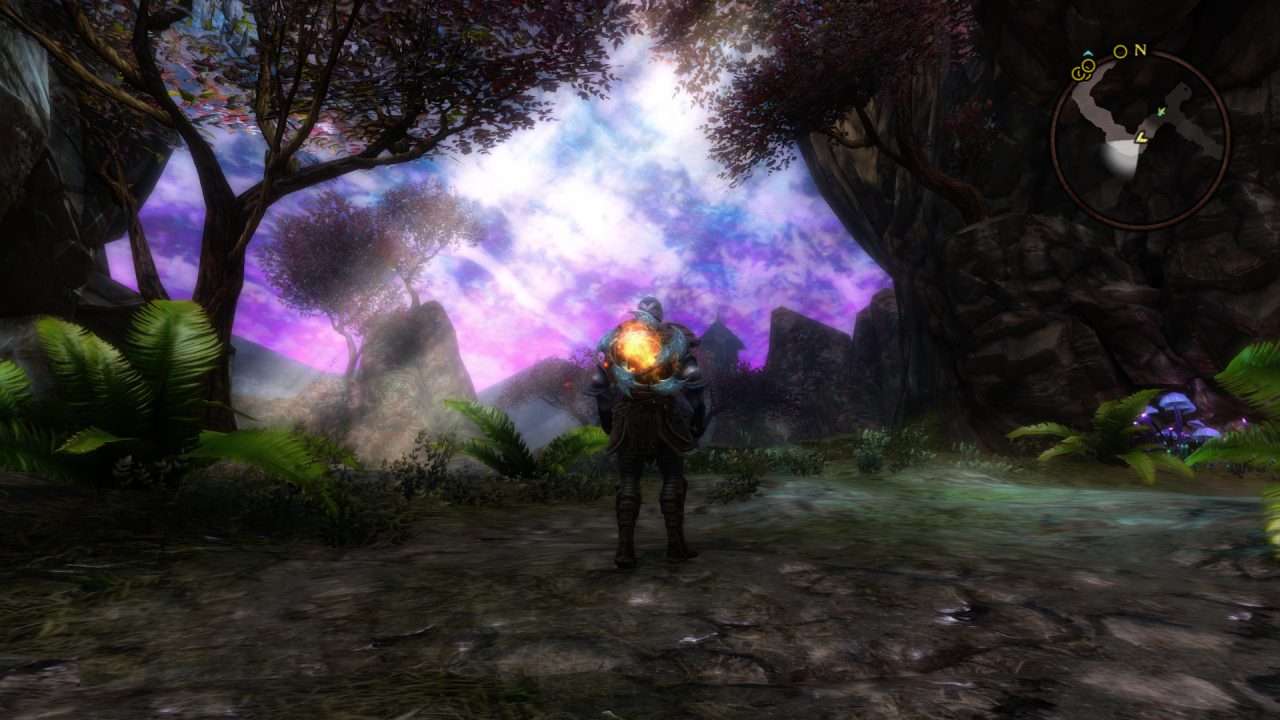 Kingdoms of Amalur: Re-Reckoning Will Eat Up Your Time

Kingdoms of Amalur: Re-Reckoning is a remaster of the 2012 open-world, action-RPG Kingdoms of Amalur: Reckoning, originally developed by Big Huge Games and the now-defunct game developer 38 Studios. Nearly a decade after its initial release, publisher THQ Nordic (responsible for other notable remasters like the recent Spongebob: Battle for Bikini Bottom – Rehydrated and the Darksiders remasters) has brought the game to modern consoles. Re-Reckoning contains the full base game along with all available DLC, including two quest-based expansions and a flurry of exotic gear and items. Taking place in a rich fantasy world plagued by a violent war, players explore the vast lands completing quests, defeating creatures, and leveling up.

With big creative names attached to the project like Todd McFarlane (the creator of Spawn), best-selling author R.A. Salvatore, and Ken Rolston (lead designer of The Elder Scrolls III: Morrowind and The Elder Scrolls IV: Oblivion), Kingdoms of Amalur: Re-Reckoning has a lot of potential. The game offers dozens of hours of real-time combat and quests that are rich with lore, but occasionally falters due to out-dated mechanics and a few other missteps. While the majority of the game is still enjoyable, this remaster is an unfortunate reminder of just how much quality-of-life and modern visual improvements make a difference.

Kingdoms of Amalur takes place in the Faelands, a lush and mystical region of the titular kingdoms of Amalur. Although all manner of fantasy species live out their days in the Faelands, the area is home to semi-immortal Fae, creatures that are able to continuously reincarnate themselves. You play as a custom-created, lowly soldier who has been recently resurrected from the dead, thanks to some successful experimentation by a gnome obsessed with magical science.

Unsure of what to do next, you forge ahead and wind up angering members of the Tuatha Deohn faction, an unruly sect of Fae who are waging a fierce war against all mortal races within the Faelands. With the Tuatha Deohn mercilessly killing innocents across the countryside and the very fabric of your destiny called into question, you set out on an epic adventure to reclaim your identity and solidify the safety of the Faelands.

The many stories you uncover in Kingdoms of Amalur are set across a wide variety of unique fantasy landscapes, including arid canyons, muddy swamps, and hills of crystal. You can also expect to trot through some spider-infested forests, hang out in some quaint villages, and pursue various evils down dark and dingy dungeons. The expansive world of Kingdoms of Amalur makes it easy to get lost in the story, appreciating the abundance of side-characters and dialogue options. While graphically speaking, most environments don’t live up to modern RPG epics like The Witcher III: Wild Hunt, Kingdoms of Amalur contains plenty of evocative locales that help immerse you in the narrative. It’s a shame that Kingdoms of Amalur: Re-Reckoning doesn’t provide a proper overhaul to the visuals, instead offering occasionally underwhelming and foggy vistas.

Kingdoms of Amalur, like The Elder Scrolls franchise, is packed with quests and can feel a bit overwhelming at points. As you explore the four distinct regions on the map, each containing approximately six unique zones a piece, you’ll pursue a wide variety of quests. These include quests pertaining to the overall main story, random side-quests discovered while exploring, and a slew of faction-based quest lines. Whenever you roll up to a new town or village, you can expect to see at least a handful of exclamation marks on the map, indicating new quests to undertake.

It’s fun to have a packed quest log with tons of things to do, but sorting through them can be a bit annoying. Unlike most modern RPGs, Kingdoms of Amalur does not display all of your quests on the world map at once. In order to get a better idea of where the quest is located, you’ll have to swap back and forth between the quest log and your map, keeping mental note of the quests your juggling. This minor annoyance eats up a lot of time over the entire journey, wasting time that you could otherwise spend leveling up.

However, the excess of quests helps flesh out the lore of each area, encouraging you to spend more time exploring and gaining experience points. The stories you’ll experience range from cliché to exceptionally high in quality, with a rich variety of fantasy tales. For example, you’ll attempt to cure a town overrun with a zombie-like virus, locate three ceremonial daggers from deep dungeons, eradicate the woods of a spider-queen, and more. At worst, the quests can be a bit dense with dialogue and there’s a few too many fetch-quests, but otherwise, they’re complex and intriguing fantasy stories.

Although quests are as rampant and easy-to-find as they are in an MMORPG, Kingdoms of Amalur: Re-Reckoning plays more like a hack ‘n slash adventure game than a traditional RPG. The combat plays out in real-time, so you’ll have to slash, dodge, and block your way through intense battles. In terms of the feel of combat, Kingdoms of Amalur reminds me of PlayStation 2-era God of War titles, containing a mixture of melee, ranged, and magical offensive weapons.

Weapons can be purchased from vendors, looted from chests, or gathered from fallen enemies. You can slash foes down with a sword, use various elemental and conjuring abilities, or fire off any number of bows and chakrams. There’s more nuance than a standard hack ‘n slash though, as Kingdoms of Amalur contains a parrying mechanic, tons of class-based skills to upgrade and unlock, and stat-based gear to equip.

As you battle fantasy foes, you’ll earn “Fate” points, eventually filling up a purple meter. Once the meter is full, you can enter “Reckoning” mode, slowing down time and allowing you to execute larger enemies for bonus experience. Whether you’re clearing out a cave full of spiders, fighting towering beasts, or any number of other objectives, you’ll be doing a lot of creature-slaying. Thankfully, due to Kingdoms of Amalur‘s simple and somewhat free-form “destiny” system, you’re free to mix and match abilities to create your ultimate loadout.

Every time you level up, you’re able to increase your skill in a variety of categories, including Mercantile skills, Stealth, Blacksmithing, Alchemy, and more. You’re free to upgrade these skill lines as you see fit, boosting whatever will help your preferred method of play. You’ll also be granted three points to deposit into a variety of abilities, spread across three main categories. There’s Might, providing warrior-based skills, Finesse, which highlights rogue and stealth abilities, and Magic, best for battlemages and wizards. You can also level up these skills by finding skill-trainers, usually hidden away in village pubs or faction halls. Leveling skills this way costs a decent chunk of gold, but I always found it worthwhile.

Each of the three categories contains various passive and active abilities, allowing players to mix and match to their heart’s content. For example, I deposited lots of points into the Might category to strengthen my longsword attacks and health, while simultaneously leveling up various magic spells from the Magic category. This, combined with a few points in Finesse for ranged weapons, made for an explosive set of skills great for any battle situation.

Once you’ve slotted your respective points, you’ll choose a destiny card. Each destiny card offers additional boons, including enhanced elemental damage, better blocking and damage resistance, and much more. You unlock more destiny cards depending on what skill categories you invest in (Might, Finesse, or Magic), unlocking better buffs to suit your play-style. While there are plenty of destiny cards that reflect the expected classes such as Fighter, Sorcerer, and Rogue, I preferred the mixed destinies such as the Wayfarer, which provides stat boosts across a large variety of damage types. The level cap for Kingdoms of Amalur is only 40, so by the time you reach the extra DLC content, you should have a pretty tight strategy formed. Overall, I appreciated Kingdoms of Amalur’s fusion of traditional leveling with the buff-granting destiny cards, which urged me to try out class-types that I usually avoid in other RPGs.

Is Kingdoms of Amalur: Re-Reckoning Good?

If you’re looking for a fun, action-RPG with tons of content, Kingdoms of Amalur: Re-Reckoning is a great choice. In terms of value, the game offers a huge amount of content for a mid-tier price, making it mighty attractive if your wallet is light. I found dozens of hours of enjoying slashing through fantastical beasts and completing quests, but the game is not without its faults.

The visuals are still underwhelming, as the remastered graphics look essentially the same as the original. There haven’t been any quality-of-life improvements either, so sorting through quests, selling gear to merchants, and other small gameplay mechanics can be annoying. However, due to its satisfying combat, well-written story, and a plethora of content, these mistakes can be forgiven. It’s just slightly disappointing that Kingdoms of Amalur didn’t receive a big-budget remake that fixed some of the old problems, because it’s a super underrated game that never got its time in the spotlight.