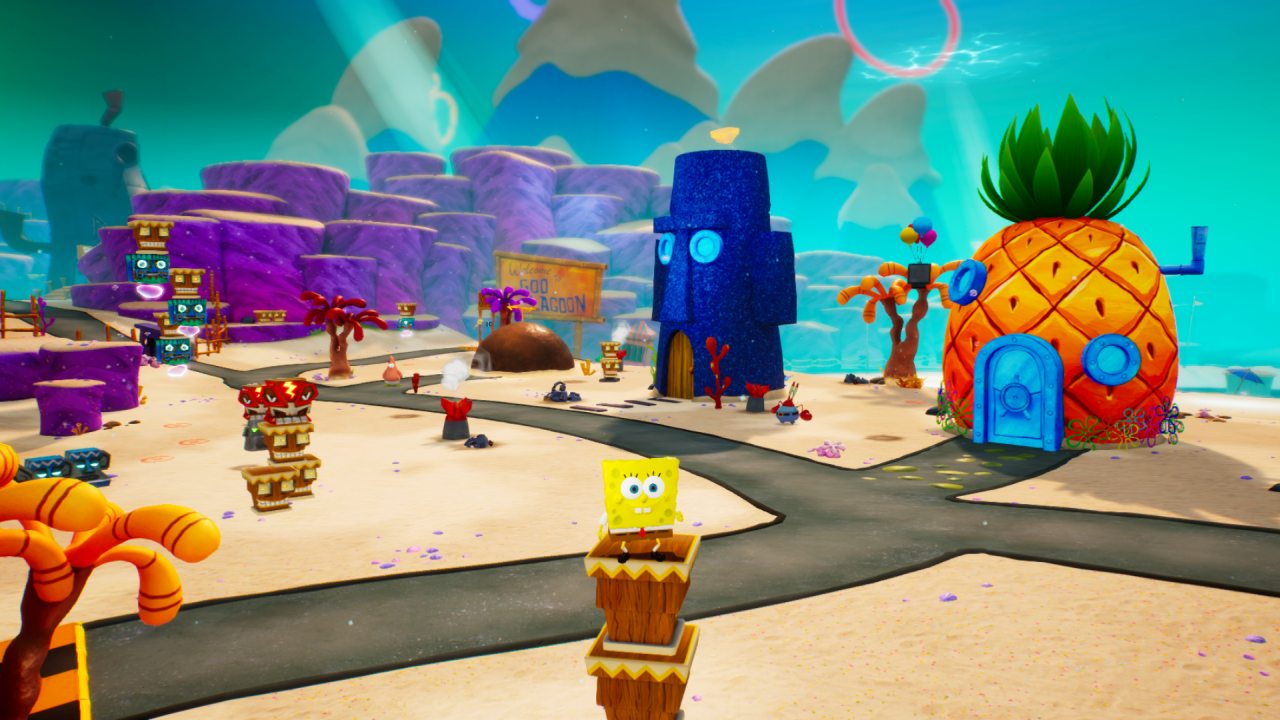 The War Underneath the Waves

The story in Spongebob Rehydrated is classic Spongebob fare; a simple yet ridiculous premise that leads our beloved sponge-hero on an adventure to save the city of Bikini Bottom. Once again, the villainous but tiny Plankton has an evil scheme to steal the top-secret recipe for the Krabby Patty. This time, he plans on using a massive army of robots to conquer the city, hopefully crushing Spongebob and pals along the way. Unfortunately, as is normal for Plankton, things go horribly wrong. After powering up his robot-producing “Duplicatotron 3000” machine, Plankton realizes that he left the command lever in the “Don’t Obey” position, giving the robots complete autonomy. As the robots tear through Bikini Bottom, Plankton must turn to Spongebob to save the day.

While the narrative in Spongebob Rehydrated isn’t exactly riveting, it’s exactly what fans of the show will expect and want. Like an episode of the original cartoon, Spongebob’s adventure is full of slapstick humor, risque jokes, and silly one-liners. Your journey takes you across the ocean floor, where you’ll meet up with an assortment of classic characters from the show. This includes Mr. Krabs, Squidward, Mermaid Man and Barnacle Boy, and many more. There are also references to popular Spongebob episodes littered throughout the environment, providing some excellent fan-service. Spongebob Rehydrated probably won’t win any “Best Story of 2020” awards, it’s still funny, charming, and just the right amount of stupid.

Although most would call Spongebob Rehydrated an action/adventure game or a platformer, I prefer to refer to it as a “collect-a-thon”. While the gameplay mostly involves jumping around obstacles, attacking enemies, and solving some puzzles, the main objective of every level is to collect an abundance of items. Similar to games like Banjo-Kazooie or Spyro the Dragon, you’re required to collect a certain number of rare items to move onto the next world. In Spongebob Rehydrated, it’s a golden spatula, which is rewarded for a variety of in-level activities. Each level has around a half-dozen spatulas to collect, mostly representing the major activities and objectives available.

As you work your way through 13 iconic Spongebob locations like the Jellyfish Fields, the Mermalair, and the Flying Dutchman’s Graveyard, you’ll collect tons of “shiny objects”. These super-common collectibles are used to unlock new areas within a level or gifted to Mr. Krabs for extra golden spatulas. Robot enemies often stand in your way, so you’ll have to smack them around and assert your dominance. While many collectibles are easy to find, you’re rewarded for exploring off the beaten path, where you might come across one of Patrick’s hidden socks. Generally speaking, combat and exploration are simplistic and straightforward, but tight controls and an overall cheery vibe keeps things fun and exciting.

As expected, you’ll play through most of the adventure as Spongebob, hopping around and using his bubble wand to bash enemies. In addition to Spongebob, you can also play as Patrick and Sandy, both of whom have exclusive abilities that help with traversal and puzzle-solving. For example, Patrick can toss enemies and objects, enabling you to hit out-of-reach buttons and switches. Sandy can glide across long gaps, making some platforming sections easier.

Depending on which characters are available in a given level, you’re generally free to play as whoever you enjoy the most, but some areas require certain character-specific abilities to pass. In order to swap characters, you’ll need to find the nearest bus station, which can occasionally force you to trek back across the level. Fortunately, the game doesn’t force you to switch characters too often, so it never becomes frustrating.

The most alluring aspect of Rehydrated is the visual upgrade, trading out the fuzzy graphics of the original for a colorful, modern shine. When compared to other remasters/remakes like the Spyro Reignited Trilogy, Spongebob Rehydrated offers a notably vibrant and vivid overhaul that always catches the eye. Character models look great, the environments are packed with color and light, and everything looks appropriately high-definition and flashy. Simply put, this is Spongebob: Battle for Bikini Bottom like you’ve never seen it, providing a visual experience that will serve your rose-tinted goggles well.

Depending on what system you play Spongebob Rehydrated on, you might run into a handful of technical issues from time to time. Despite the game’s crisp and colorful visuals, there are occasional instances of visual glitches, texture pop-in, as well as long load times. I also encountered a few gameplay bugs, including my look-inversion setting being changed and a few instances of clipping. However, the developer has been putting out updates that will hopefully fix most of these issues, so you may not have to worry about them.

Bikini Battle With Your Buds

There’s a new cooperative multiplayer game mode in Spongebob Rehydrated that allows you and a friend to fend off waves of robot baddies. Either through local or online play, you and a friend must survive as you fight across 25 small islands. There are seven playable characters: Spongebob, Patrick, Sandy, Gary, Squidward, Kr. Krabs, and Plankton. Most characters control the same, with very few differences in terms of moves and abilities.

While the multiplayer mode is a nice addition, it’s not very complex or replayable. Battling enemies is fun enough, but there’s no real challenge, as you’ll never experience a “game over”. Playing through the experience should only take you around an hour depending on your skill, with no additional difficulty settings or modifiers to add replayablity. Apart from competing with your friends for Spongebob bragging rights, the multiplayer mode doesn’t offer much, making it a serviceable but underwhelming addition.

If you grew up watching the Spongebob cartoon or have nostalgia for the Spongebob games of previous generation consoles, then Spongebob Squarepants: Battle for Bikini Bottom – Rehydrated is worth your time. Even when you consider the occasional technical hiccups and so-so voice-acting, Spongebob Rehydrated is still an immensely charming and enjoyable adventure. Running around Bikini Bottom and collecting everything in sight is both cathartic and exciting, due to fun platforming sections and simplistic yet satisfying combat.

Spongebob Rehydrated does what a good remaster should. It gives the graphics a modern update, adds in a bit of glitz and glam, and keeps things the way they were in the original. Apart from the new multiplayer mode (which is pretty fun, even with its flaws), Spongebob Rehydrated is simply a much better looking version of Spongebob: Battle for Bikini Bottom. It’s not the big-budget, Spongbob extravaganza that some players might want on modern systems, but it’s still a solid and completely enjoyable experience. Plus, it’s a great game to test the skills of younger players. If you’ve been thinking about picking up Spongebob Rehydrated but you’re not sure, I recommend you give it a whirl.