The Forza Horizon franchise brings us to the UK with shifting seasons in Forza Horizon 4. Like past entries, you’re free to explore the beautiful open world and complete a variety of racing activities at your leisure. Forza Horizon 4 opens up online connectivity in interesting ways, offering 72 player online servers and a four season rotational system. This is the foundation for a vast array of automobile excitement, with hundreds of cars and events to collect and compete in. Forza Horizon 3 was an achievement in open world, arcade racing games. Can Forza Horizon 4 somehow improve, or is it time to pump the brakes?

Next to the various online features and quality of life improvements, the biggest change in Forza Horizon 4 are the rotating seasons. All four major weather seasons (spring, summer, fall, and winter) are represented, and each one completely changes the entire map. New terrain becomes available, races play completely different, and new challenges populate the map. Beyond the visual glamour of changing leaves, fresh spring flowers, or pure white blizzards, the seasonal changes make a noticeable impact on your gameplay.

The map itself is a smart representation of the UK countryside, centered on the winding streets of Edinburgh. It’s smaller than Forza Horizon 3‘s Australia, but the season changes make it more like four maps in one. There are mountain tops to climb, various fields to plow through, and countless stone walls to destroy. The map quickly becomes populated with a huge variety of events, each type highlighting different vehicle classes and environments. I actually prefer this smaller, more compact world in comparison to past Forza Horizon games. There is enough variety within a reasonable distance, and no event ever feels “too far away” to just leisurely drive to. 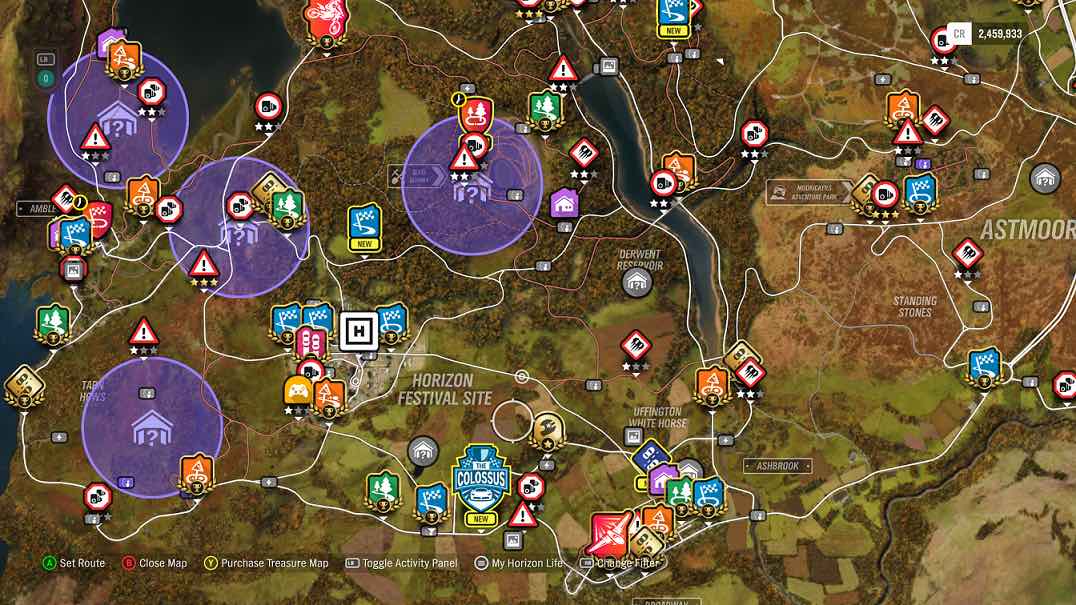 For the first dozen or so hours of gameplay, Forza Horizon 4 slowly introduces you to its various features and racing types. You are once again introduced to the concept of the Horizon festival; a massive get together of car enthusiasts and high skill racers. This festival takes over the countryside, expanding as you compete in its various activities. The guided portion of Forza Horizon 4 takes you through a single rotation of the season cycle. Each portion allows you enough time to get somewhat familiar with the changes each season brings before shuffling you along to the next.

You are tasked with gaining enough “influence” (basically experience points) to unlock the next season, and you can do so by trying out new activities as they are introduced. This is a great precursor to the online portion of Forza Horizon 4, dubbed “Horizon Life”. Although Horizon Life has some differences than the beginning 12 hours, it’s still a similar experience. Forza Horizon 4 is all about racing fast, breaking off the open road, and generally letting loose.

The Best at the Fest

Forza Horizon 4 encourages freedom, and the new progression system reinforces that. As you compete in races, explore the map, or complete a variety of side activities, you gain experience in a representative skill. Once you’ve leveled up this skill, you earn rewards and additional events to complete. For example, completing the initial batch of Street Races levels up your street racing skill, eventually unlocking the next round of races. There are a plethora of ways to level up, and this smart progression system allows you to compete in the events you find interesting without halting your overall progression.

You also have an overall player level that grows over time, as well as individual skill points you can spend on car-specific skill trees. Before, Forza Horizon games offered you an overarching skill tree to bank your points on. Forza Horizon 4 spreads those skill trees out, giving each car its own personal tree to complete. The rarer the car, the more skills you can unlock. These skills give you bonuses that range from improved drift scores to free wheelspins, and everything inbetween. That said, Forza wheelspins return, and remain a great example of a lootbox that doesn’t feel cheap. You’ll spin a normal wheel or a “super” wheel, unlocking things like credits to spend on upgrades, cosmetic items for character, or even brand new vehicles.

Perhaps the best part of Forza Horizon 4 is the sheer variety of race types and activities that you can compete in. If you played Forza Horizon 3, a lot of this content will feel similar in nature, but that doesn’t make it a bad thing. The main race types you’ll encounter are dirt racing, cross-country, road racing, and illegal street racing. There are also other miscellaneous activities scattered throughout the map, like the drag strip, speed traps, danger ramps, and a slew of collectibles to find. You can also purchase some local properties to use as fast travel points and personal garages, find and restore historical vehicles in hidden barns, or compete in the multiple Showcase events. The Showcase events are often ridiculous and highly scripted races, and have you performing feats like racing trains and jets. There’s even a really cool Halo themed race that is loads of fun and worth several replays. Of course, all of this content can either be played solo against computers, cooperatively with a group of friends, or competitively against others online. 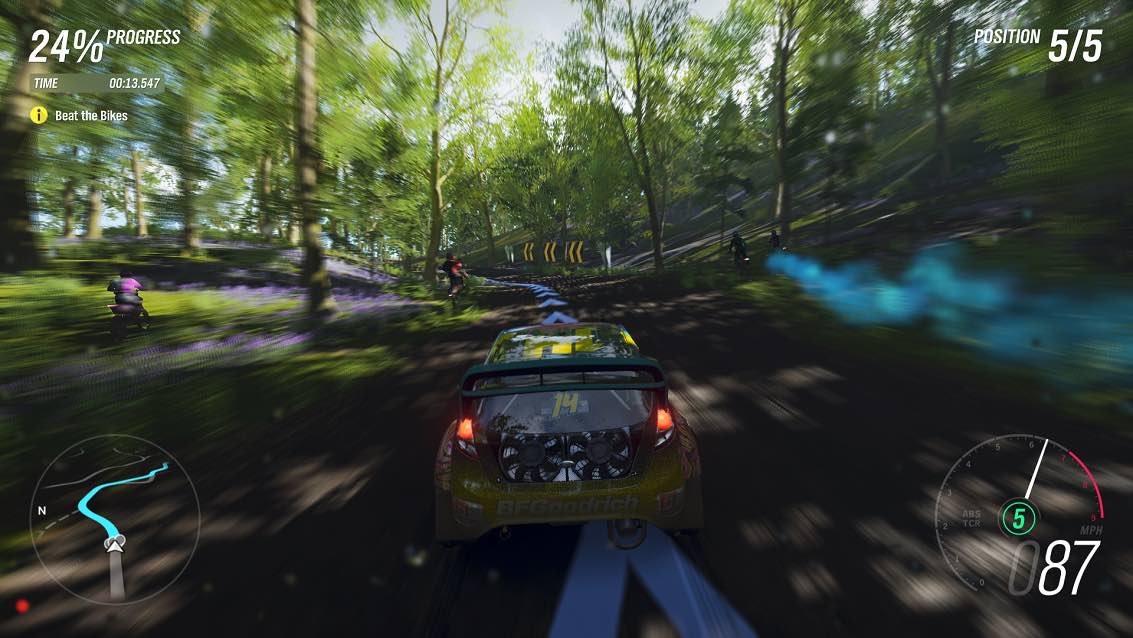 Forza Horizon 4 does introduce a new activity type; Story Chapters. These are four activities that center around a unique concept, and each one contains 10 different events to enjoy. Unfortunately, these activities replace the Forza Horizon Bucket List, which was my favorite feature in Forza Horizon 3. Some of the story chapters are pretty interesting, although they vary in quality. One chapter has you filling on a movie set as a stunt driver, pulling off crazy jumps and high speed scenes. The stunt levels are fun and engaging, but as far as actual story goes, they leave a lot to be desired. Same goes for the “fastest rentals” chapter, which has you driving some of the world’s fastest cars. The best of the four is the “LaRacer” chapter, which follows an eccentric internet personality filming videos that pay homage to her favorite racing video games. You get to relive some fun moments from games like Smuggler’s Run, Outrun, Project Gotham Racing, and more. The final chapter is arguably the weakest; Drift Club. It’s about as predictable as they come, offering ten drifting challenges on a variety of routes.

As a substitution for the Bucket List, the Story Chapters are a step down. Although there are a few really fun events (stunt racing and video game homages specifically), the majority of them feel repetitive. They lack the creative spark of the Bucket List, which featured dozens of custom challenges that focused on the coolest cars in the game. However, the plethora of other excellent racing content makes it easy to forgive this blunder.

A Horizon Life for Me

In addition to the rotating seasons, Forza Horizon 4 focuses on multiplayer connectivity. Once you’ve made it through the opening hours of the game, you’ll connect to an online server that hosts up to 72 other players. You can’t run into these players or otherwise derail them, but it’s fun to share the world together. There are specific online championships and a large variety of community features to take advantage of, but overall the online portion doesn’t drastically change the fundamentals of the Forza Horizon experience. The biggest change you’ll notice when playing online are the Forzathon Live challenges, which happen every hour on the hour. These are cooperative events that point all players on the server towards one special objective, encouraging everyone to work together to reach a required score. This creates a gleeful pandemonium, as dozens of cars drift around the same corner and blast down straightaways at ungodly speeds. It’s also a great time to show off your custom paint jobs and car horns, as well as utilize the various quick chat options. The online focus brings in plenty of character customization as well, allowing you to spice up your avatar with various clothing options and emotes.

If none of the online stuff sounds fun to you, that’s fine too. You can play the game offline as well, and never be forced to interact with another person. There’s no real benefit to playing that way, but I completely understand why someone might want to. Luckily, Forza Horizon 4 is all about freedom. The online features are nice, but you can completely overlook them and still have a fantastic racing experience.

The Bottom Line on Forza Horizon 4

When I think of the Forza Horizon franchise, the first thing I think of is fun. Although the game offers an extensive amount of options and gameplay features, it manages to feel welcoming and casual at the same time. There’s a baffling amount of content to indulge in, and there’s something for everybody here. Whether you’re a competitive online racing fan or someone who just wants to enjoy the scenery and explore, you’ll have a remarkably enjoyable time. Although the game features a bunch of cool online options, it never forces them on to you or makes you feel like you’re missing out if you ignore them.

Forza Horizon 4 has a way of sucking you in and holding your attention for hours at a time. The laid-back attitude and liberal amount of rewards and bonuses make it incredibly easy to succumb to “just one more race” over and over again. I’ve completed all the story chapters, won multiple championships, and asserted myself as a racing fiend in the world of Forza Horizon 4. I’ve collected and customized dozens of cars, driven off of cliffs, and destroyed hundreds of years worth of rock walls. As I approach 50 hours played and the envious Level 100 player rank, there’s still no end in sight. More importantly, the game is still just as fun as it was when I started it. The lackluster Story Chapters leave a disappointing scar on an otherwise flawless product, but that’s a mistake I’m willing to forgive. If you like the idea of cars going fast, you should try out Forza Horizon 4… you will be glad you did.