2017 was the year I discovered gigantic JRPGs of yesteryear: We streamed and finished Final Fantasy XIII, XII-2, Lightning Returns, Final Fantasy X, X-2, Legend of Dragoon, Lost Odyssey, and my first ever Tales of game, Tales of Xillia. A friend recommended Tales of as our streaming community and myself quite enjoy a hefty JRPG story we can discuss, and challenging boss battles. Although I was skeptical of the series for its frequent output (16 games since 1995), it won me over with great writing and engaging combat. 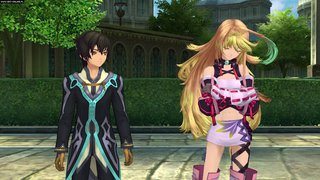 A JRPG stands on its writing and combat. Xillia’s writing impressed me throughout with logic. Even in a fantastical world of magic, the characters reactions felt grounded in their well defined motivations. If I questioned the logic of a line, another character would quickly chime in with what I was thinking. This was consistent throughout the long journey.

Early in the story when the two main protagonists first meet the rogueish Alvin, they got into a fascinating discussion about appearances that took me aback. I was impressed with the depth and difference of their opinions as they discussed the philosophy of judging people based on outward appearances and/or personality. Although the visuals and engine can appear bland, the writing often goes deep.

As far as I know, the Tales of series uses a similar real-time combat across the franchise. Simple one-button combos and special moves called Artes for damage, while blocking, timed dodges, and free-running make up the defense. I really enjoyed the real-time aspect, especially the generous dodge window that allows your character to materialize behind the opponent for an advantage. This made me feel like a martial arts badass, nimbly evading powerful attacks unleash my own.

The fighting is set on a 2D plane but the free-running and AOE attacks introduce 3D elements. This offers more options, but lining up your attacks can be clunky sometimes, resulting in your character facing the wrong way while attacking. Not so badass.

Linking up with party members offers attribute bonuses, more control, and the ability to link the Artes. Once a bar is full, you can also chain the linked Artes to pull off entertaining and damaging combos that look straight out of Marvel vs Capcom. Linking with different party members is another strategic decision allowing you to tailor for elemental weaknesses, and/or choose to be offensive/defensive/balanced.

I love a challenging boss battle in an RPG, and that can be tough to balance in a genre that generally allows the player to control their power level. I enjoyed most if not all of the boss encounters in Tales of Xillia. Their attacks were varied enough that I had to change my strategy often. Even optimal attack patterns eventually proved useless against other bosses. I failed several times and enjoyed the learning process and eventual gratification of victory.

My critiques of the combat come from a few frustrating AOE/ranged and/or boss attacks that felt either difficult to initially dodge, or left me stun-locked for massive damage. Those didn’t happen often enough to put me off however.

I only wished there were more of the tougher encounters. The mob-type enemies encountered on the field are braindead easy (perhaps to allow training of new techniques?) and running into the first challenging boss was a rude awakening after a few hours of nothing battles. If the field enemies were a bit tougher it would have better prepared me for the most challenging bouts.

All of these entries in the franchise has taught Bandai Namco a thing or two about making a pleasing RPG. Nearly every field-enemy encounter was easily avoidable, making backtracking painless. Fast travel was available early as well, further cutting down backtracking woes. Battles with regular enemies are fast-paced and usually over very quick. When dealing with shops, I was delighted to see I could buy, sell, and equip all from the same screen. The UI was fast and intuitive to navigate. Cut scenes could be paused and skipped. Difficulty was always changeable. It felt like the developer paid close attention to the common issues RPGs have and made sure to minimize them. Overall, it was a pleasure to navigate the game.

The final act of the game broke the pacing and felt like the developers ran out of time. After the main arc reaches a satisfying climax, the story branches in a new direction, tying up everything in a rushed, jumbled manner. The troubled area is short and doesn’t affect the final resolution too much, but there is definite room for improvement.

If you enjoy the traditional aspects of a JRPG, you will find a solid package that respects your time and frequently hits high, memorable moments. Of course the real-time combat is far from a traditional turn-based system but there’s still plenty of strategy and planning for those wanting a deeper combat experience. You are also able to control any character in the party allowing you to find your preferred playstyle while programming the AI of your companions.

Tales of Xillia was a consistently strong package that reached several strong moments that’ll stay with me for years to come. I can heartily recommend it to JRPG fans that welcome a modernized combat.

My complete playthrough of Tales of Xillia is below if you care to see.