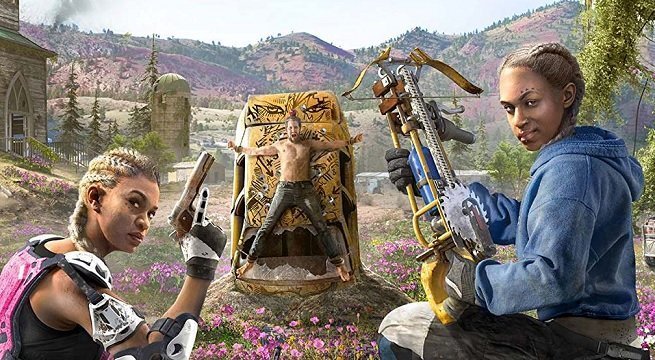 A new Far Cry game is set to be revealed tonight during The Game Awards, but the cover has already leaked. The next game in the series will be called Far Cry: New Dawn, and you can see the full cover right here:

The cover, as you might have imagined, is eliciting some pretty strong reactions from, well, everyone. Some gamers are really excited to see two women of color on the cover of a big-budget AAA video game. For these people, this is a huge win for representation. Others are concerned that Ubisoft is pandering to the “inclusive” crowd, and we’re already seeing some really nasty comments from people who love to use the word “snowflake.” You know the type.

Before we get into all of that drama, though, you guys need to check out the teaser trailer. It’s pretty intense, and seems to be teasing a post-apocalyptic theme for the next Far Cry that’s actually giving us some pretty serious RAGE 2 vibes. Check it out above.

Now to the drama. We’re not going to share the tweets here natively, but if you click on Wario64’s tweet above, you’ll see what is actually a pretty mild reaction to the cover art, comparatively. The spectrum of emotion showcased in some of the tweets, Reddit comments, and message board posts is astounding. I think that everyone can agree that variety is good; new things are interesting. We’re excited to engage a new story, with new characters, but not everyone is pleased by diversity.

What do you think of the new Far Cry cover? What do you think New Dawn will be about, and are you happy with the direction that Ubisoft is taking with this latest entry? You have a few hours to speculate, because the official reveal is taking place tonight during The Game Awards. If you plan to tune in, you can do live at 7:30PM Central time, which should be about 12:30PM in Australia. You can check here for official times and links.