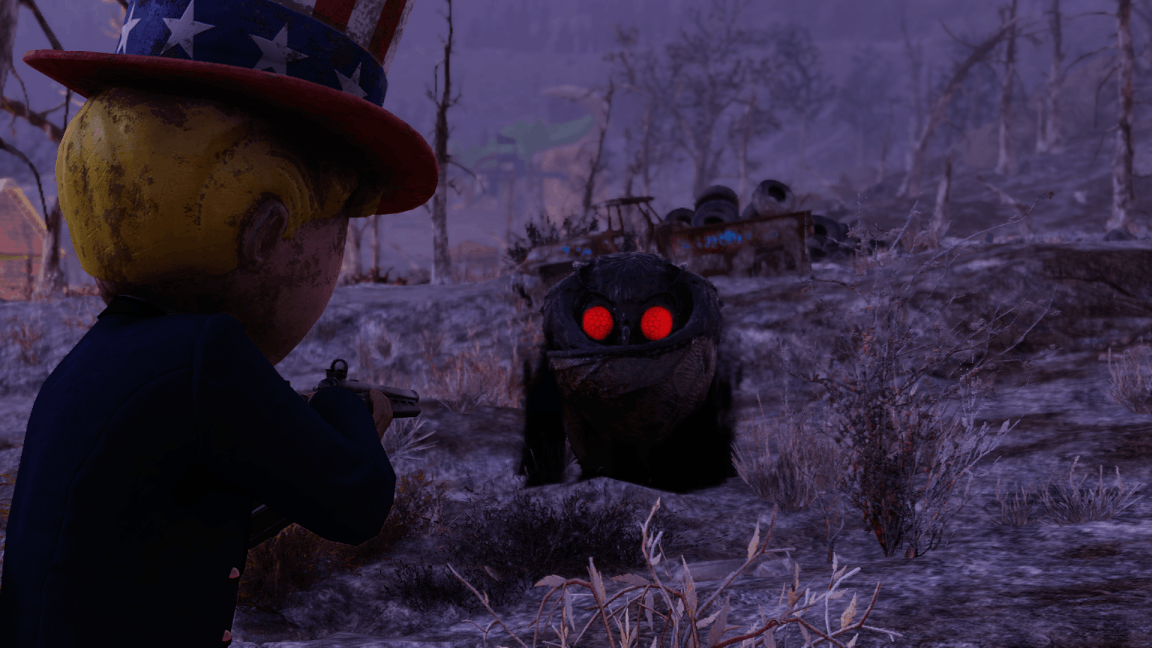 Bethesda Games has taken a beloved franchise and morphed it into something slightly new in Fallout 76. Like other RPGs made by Bethesda, the game is rich with quests to pursue, gear to loot, and experience points to gain. What sets Fallout 76 apart from the other Fallout titles is the persistent online world, multiplayer offerings, and focus on survival elements. This makes for a familiar but distinctly altered Fallout experience, that while interesting, can be sloppy and bothersome to play. 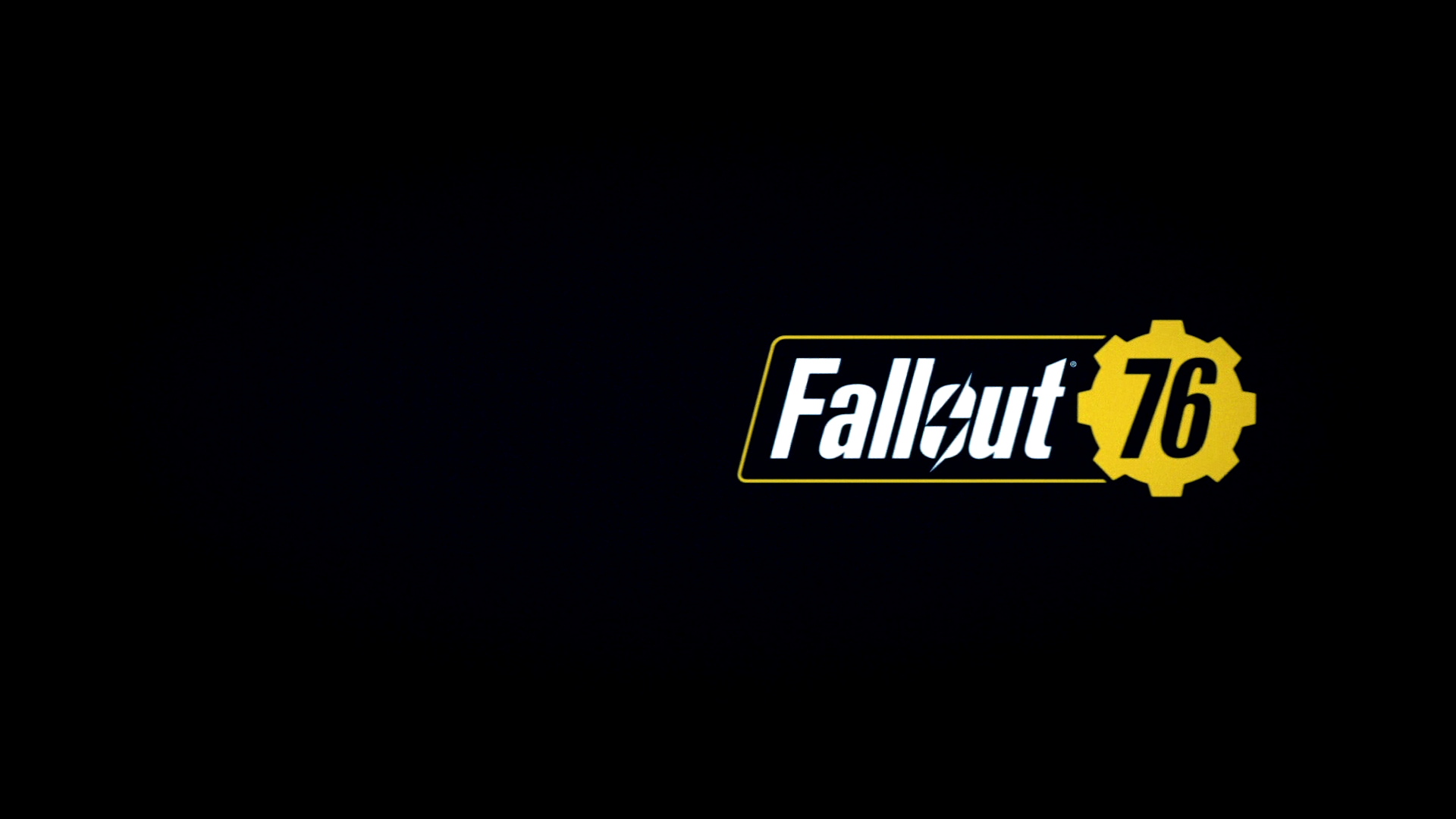 The narrative of Fallout 76 focuses on your custom character, a fresh face in the post apocalyptic countryside of Appalachia, West Virgina. Emerging from Vault 76, one of the earliest underground vaults opened after a nuclear war, you explore the new world intent on reclaiming it for humanity. 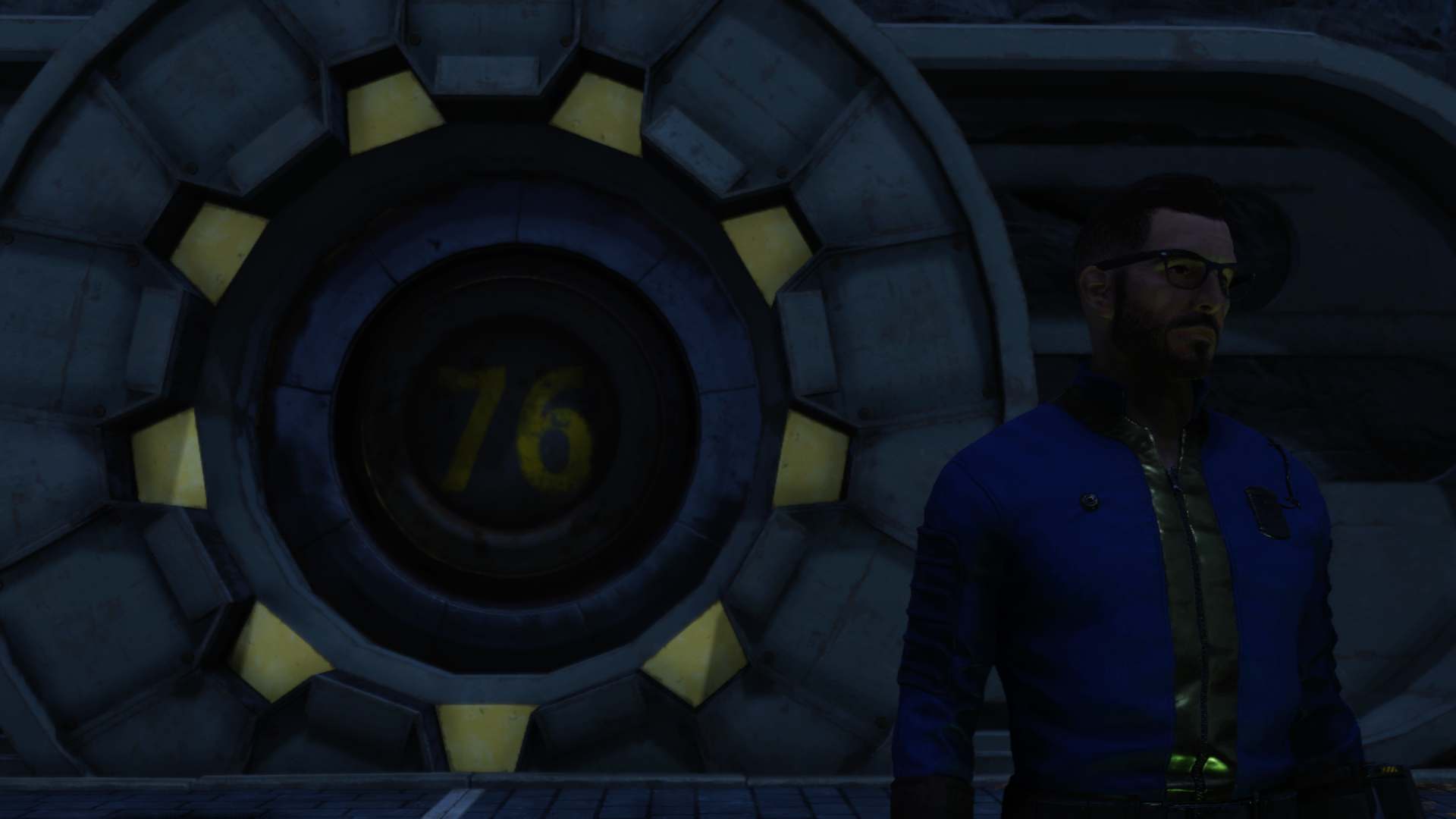 As a member of Vault 76, your entire goal is to survive in the questionable environment of a post-nuclear landscape. Fighting off radiated enemies, scavenging for food and supplies, and generally exploring the environment are top priorities. Braving the new world is tough, but with the right skills and some help, you might live to see a new day.

Ground Zero and Beyond

Like other Fallout games (post Fallout 3), gameplay mostly consists of first or third person combat, including a variety of weapons and enemies. As you explore the vast map of Appalachia, you’ll encounter quests to complete, leading you to areas of interest. Along the way, you’ll discover new gear to equip, and gain experience to level up your character. There’s an increased focus on survival, as you’ll have to eat and drink regularly to balance your hunger and thirst meters. Additionally, Fallout 76 contains a good amount of crafting, as building and maintaining your personal home base has become a bigger element in the overall gameplay structure. 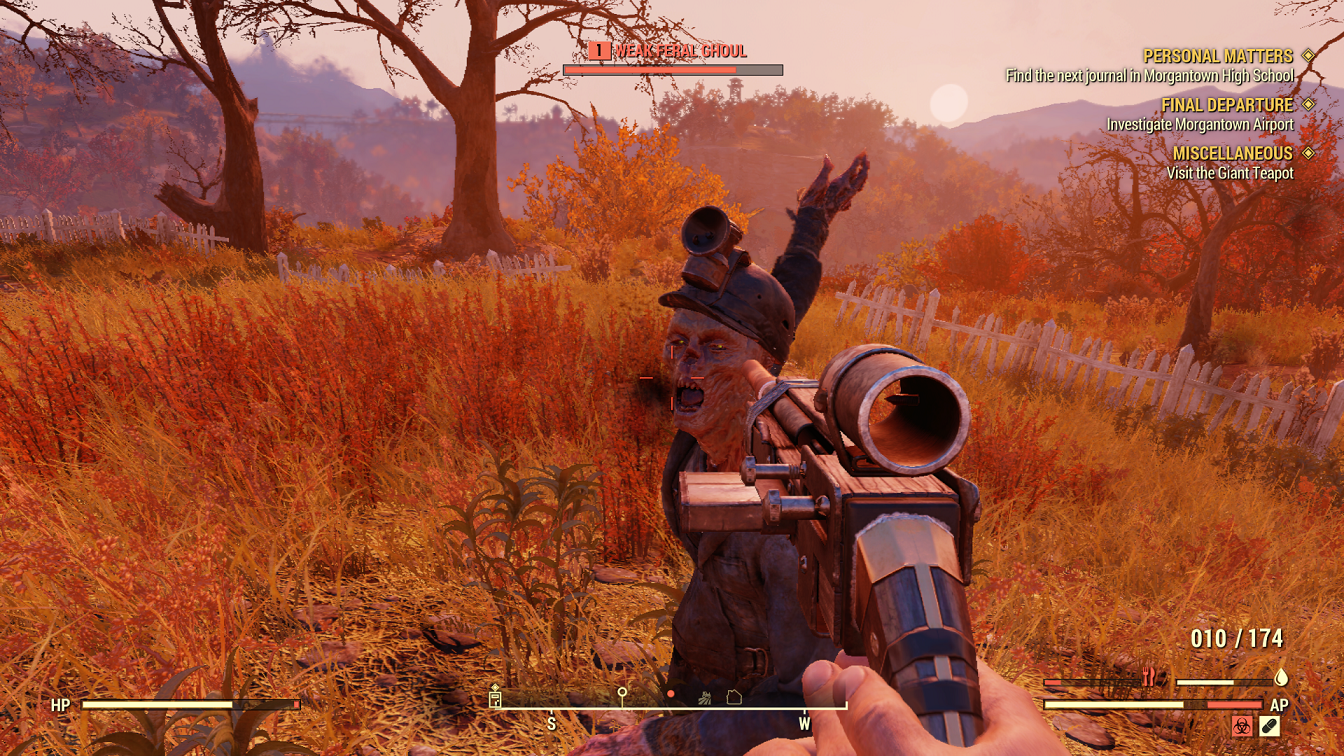 Perhaps the biggest change of pace is the inclusion of multiplayer. Instead of inhabiting a solo world, you’ll connect to an open online world, where up to 24 players co-exist. In addition to cooperative questing, there are various public events to encourage multiplayer interaction. In fact, the only humans you’ll see in Fallout 76 will be other players, a fact that both strengthens and weakens the overall experience. Connecting with other players is easy and fun, but the lack of human NPCs can make the world feel empty and remote. Intended or not, unless your constantly playing with friends, Fallout 76 feels very lonely.

In many of Bethesda’s titles, the quests you embark on make up the majority of the experience. The story and narrative of a Fallout title is usually a big factor, but that’s not true in Fallout 76. Once you leave the Vault, you’ll find audio logs and computers as you explore. These, along with various robotic NPCs, give you quests. Quests usually point you to an area of interest, where you’ll explore and scavenge some more. You’ll usually find an additional audio log or computer, which wraps up the limited context of your quest. Instead of actively taking part in cool missions, you often feel like you’re arriving late. Quests are more about finding out about an interesting thing that happened before you arrived, and the function a location served in the past. 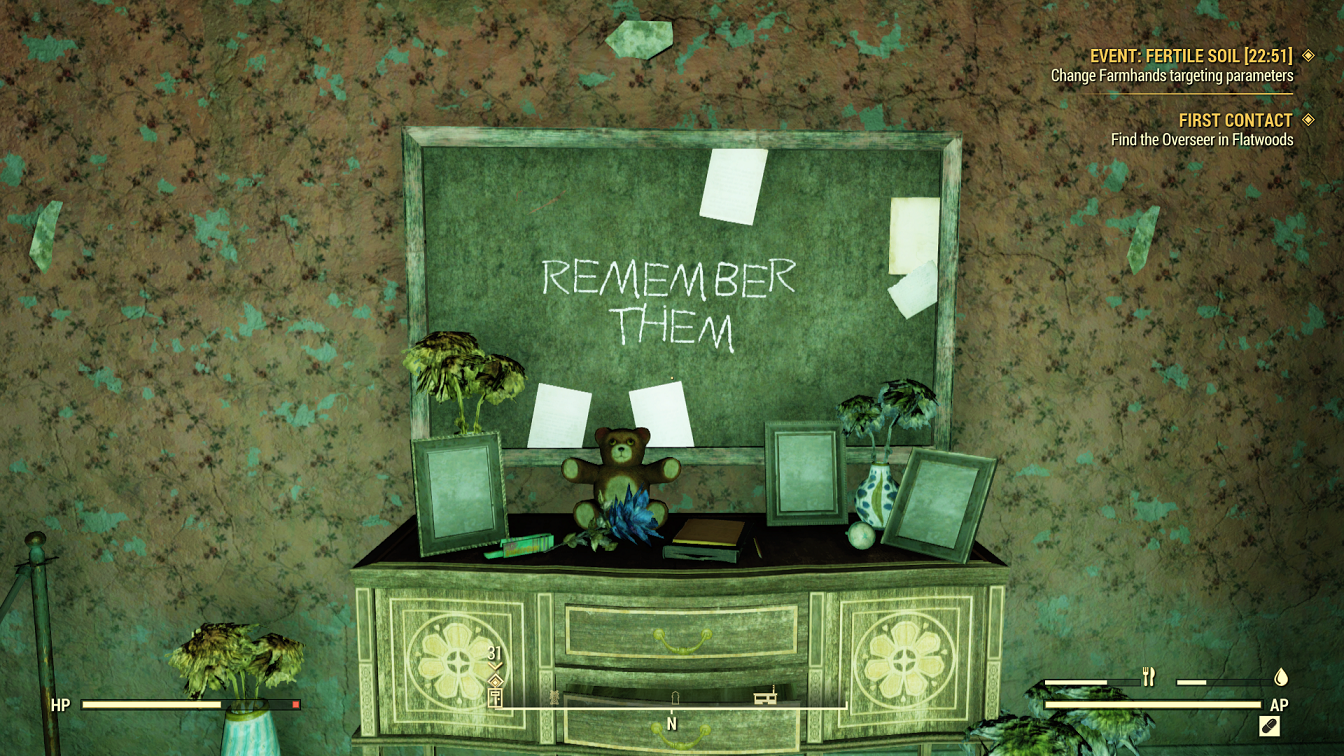 Since every quest is told through reading or audio logs, the narrative element is limited. There is a designated set of “main” quests, but these also feel shallow and boring. One quest line has you following in the footsteps of the Vault Overseer, who left the Vault prior to your awakening. This serves as a nice way to introduce you to the game mechanics and see some fun locations, but things grow repetitive quick. All told, quests feel more like an afterthought when it comes to gameplay. The stories you’ll hear are interesting at times, but they make no impact on what you’re doing.

Luckily, the world of Fallout 76 is oddly compelling to explore. The rich countryside of Appalachia are littered with some fun locations, including a military training course, cryptid museums, and a slew of shops and homes. Taking in the sights is fun, and poking around the more unique locations   can be exciting. However, Appalachia is a tough place to inhabit. Limited food, water, and medical supplies forces you to play at a slower pace. If you encounter any rough enemies, you’ll often spend more time looking for healing items than anything else. That said, there are some truly interesting enemy designs that feel quirky and appropriate in the game’s mysterious Midwestern setting. 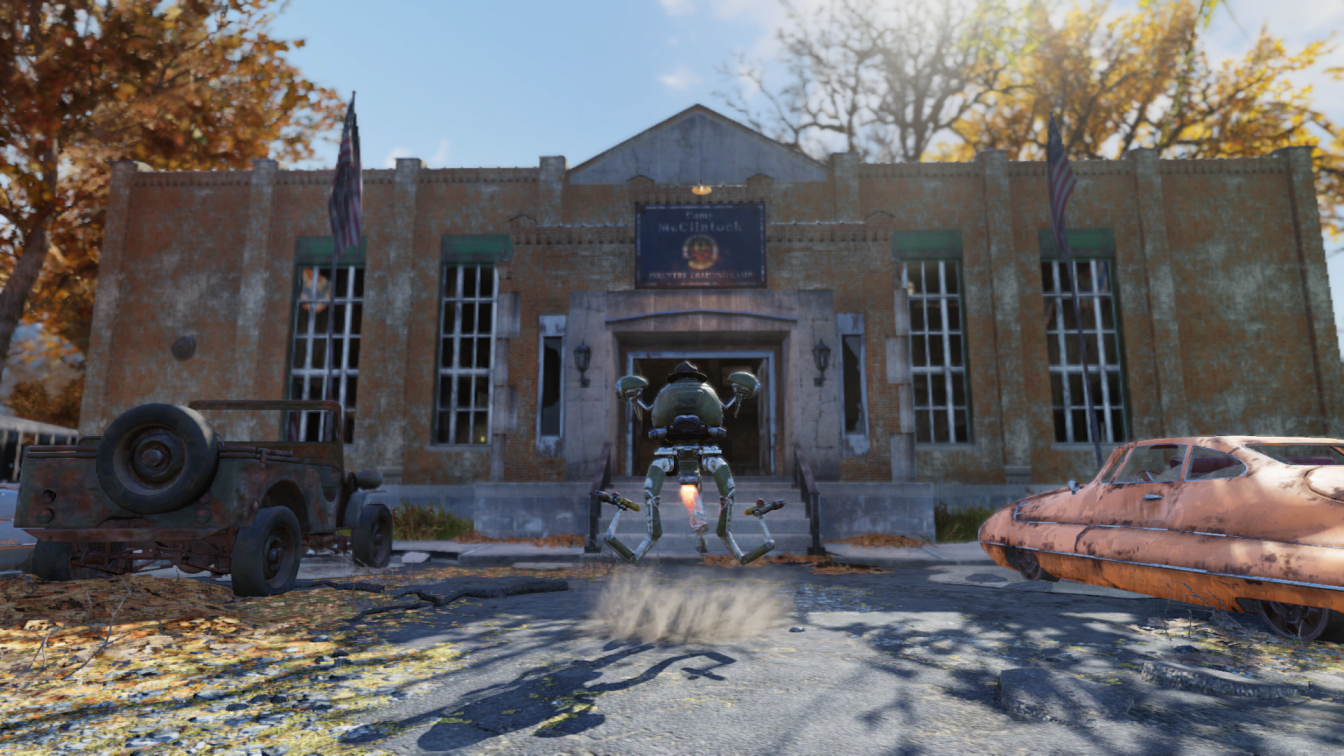 Unfortunately, Fallout 76 falls apart in the long run. Without a strong narrative element, you are left with a more stripped Fallout experience. You’ll quickly notice that combat is clunky and unforgiving (especially early on), and that spending hours of collecting garbage is a repetitive task. While the new Perk card leveling system is interesting, maintaining your stats and staying healthy quickly becomes a bothersome chore. Upgrades that make survival easier are a must; not because its an obvious advantage, but because it removes the tedium of eating and drinking regularly. What are meant to be fun gameplay mechanics are instead obstacles to tackle. 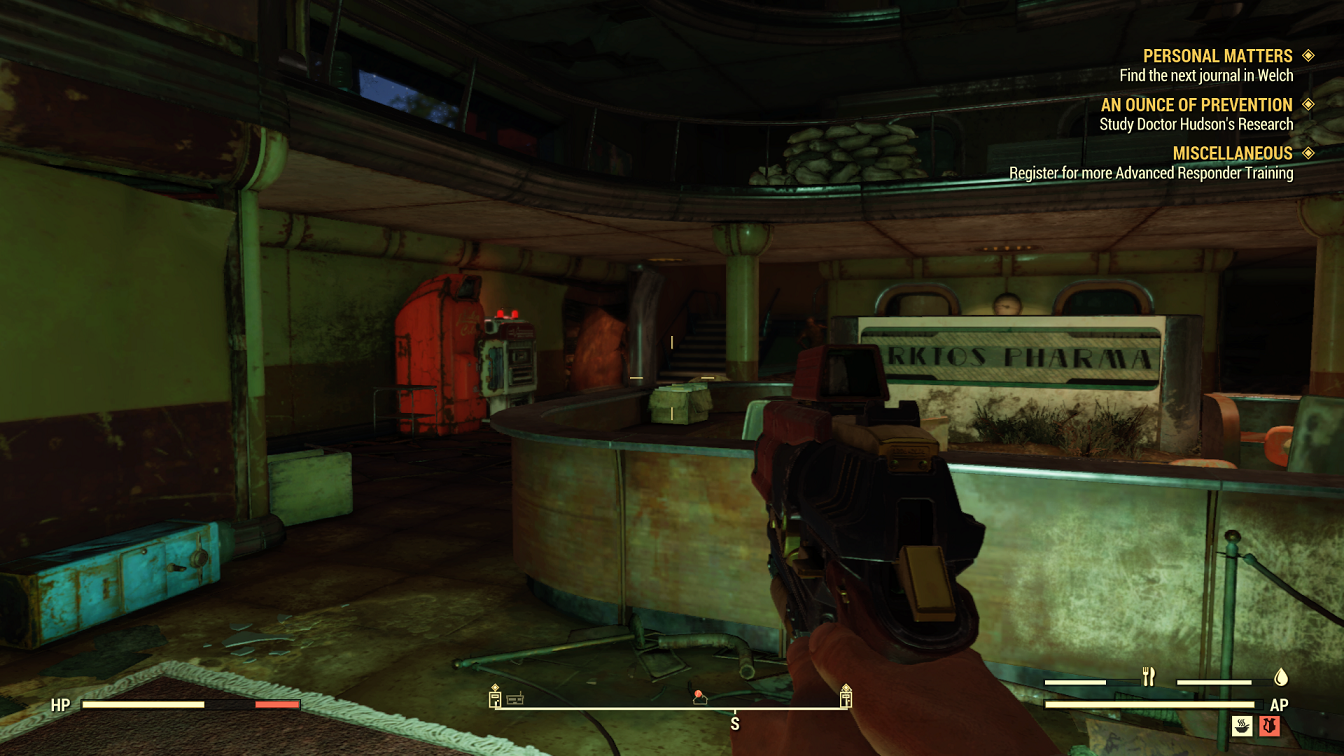 This is made worse by the online nature of the game, which doesn’t allow you to pause while sitting through menus or selecting your gear. If you’re not quick, changing weapons during combat usually results in taking significant damage. If you fail to clear a building of enemies, you’ll likely get smacked while bent over an in-game computer. On the rare occasion you find something of true value, you’ll want to stash it fast, as consistent game crashes and glitches can revert your progress. When you’re not battling the more game-breaking issues, the constant frame rate drops and lag present other technical annoyances. I’m sure that, with time, these issues will be fixed with patches and updates. However, a lot of the game feels unfinished and akin to and early access title.

The Bottom Line on Fallout 76

Fallout 76 has some decent ideas, but it fails on the execution. The idea of a persistent online Fallout game is interesting, but Fallout 76 doesn’t feel like a full realization of that. Instead, it’s a repetitive survival game with a hefty amount of exploration and crafting. While the world of Appalachia is interesting at first glance, locations are often shallow and not very exciting to explore, given the limited scope of the narrative and quests. There are a slew of technical issues that make gameplay frustrating, including crashes, slowed frame rate, and a number of standard Bethesda-engine glitches.

If you have a group of dedicated Fallout friends and you’re okay with a less guided experience, there’s some fun to be had. Fallout 76 is a decent sandbox, so those looking to simply unwind and do some looting might be satisfied. For solo players, things can get awfully lonely and repetitive. There’s rarely a good motivation to keep going, unless you’re a big fan of the base building from Fallout 4. The weak story structure and tedious collectible-heavy nature doesn’t make it a very fun game, even when the exploration is compelling. Ultimately, Fallout 76 will be a love or hate game. Those who enjoy it will still suffer through bugs and glitches, but most might not find any enjoyment at all. It’s not the worst survival game in recent memory, but beyond bearing the Fallout brand, it doesn’t do much to keep players interested. At its worst, it’s a glitch-filled mess with a lack of polish and poor game mechanics. At its best, it’s an interesting map with some fun online components. However, it’s a step back from Fallout 4, and a disappointment when compared to other games in the genre.