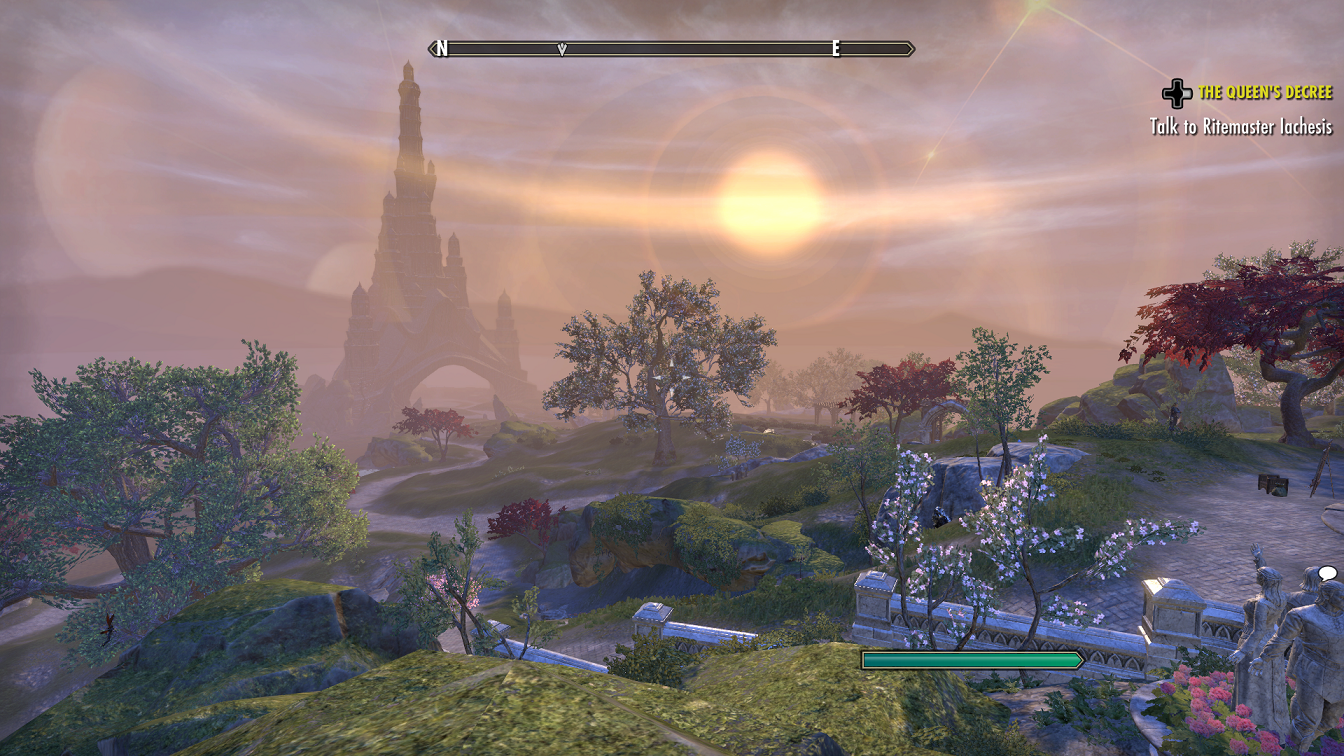 This major expansion for The Elder Scrolls: Online takes you to the lush island of Summerset, home of the High Elves. When a recent decree from the queen opens up the borders of Summerset to visitors, many of the inhabitants of the island take issue with it.  A rise in tourism isn’t the only thing the citizens of Summerset have to worry about, as dark forces are at play.  Beneath the surface of the idyllic island, a group of dark mages conspire against the world.  It’s a fun and exciting setup, but does The Elder Scrolls: Online – Summerset pull it off? 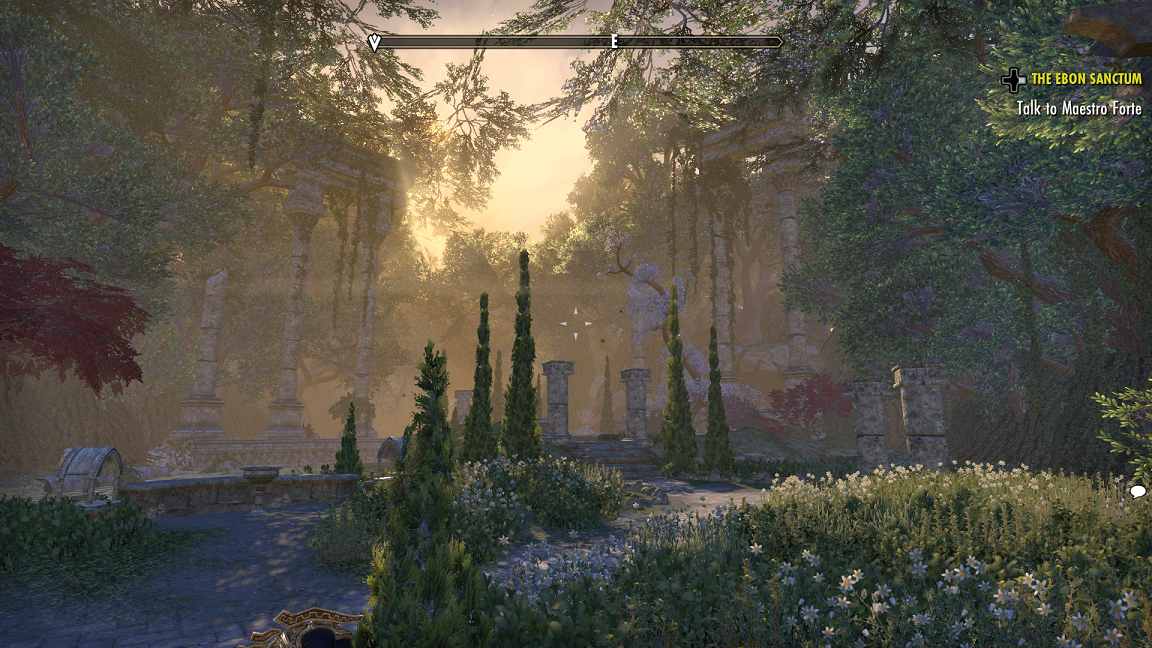 If there was one thing that sticks out to me about Summerset, it’s the pure quality of the narrative.  The main quest starts with you meeting up with a fan favorite character, who encourages you to join him on a mission for the queen. Recently, the borders of Summerset have been open to visitors, allowing people from other continents to arrive on the beautiful and peaceful shores. Unfortunately, some of these visitors have been sequestered by monks who live on the island, and it’s up to you to find out why.

The main quest also focuses heavily on the Psijic Order, a group of mystical sorcerers who spend centuries researching ancient magics.  You’re eventually able to roam around Artaeum, a disappearing island that houses the mysterious group. Although the majority of the content takes place on the actual island of Summerset, the quests that you complete on Artaeum are enjoyable and fun in their own right.

One of the most impressive aspects of Summerset is the quality of its characters and storylines. From the main quest to the substories you’ll pick up along your journey, each story in Summerset is engaging and interesting.  When I first played The Elder Scrolls: Online, I was mostly disappointed with the quests and stories within.  The first major expansion, Morrowind, was loads better.  Summerset easily ranks at the top of the list based on inventive quests and fun adventures. The land of Summerset is a treat to explore and the characters within it are interesting and compelling.  I normally play The Elder Scrolls: Online in a passive manner; idly completing quests with little thought or concentration. Summerset changed that, and I quickly found myself deeply interested in the world it was letting me discover.

Not Just a Face

While the main quest is interesting enough to keep you going, I found the most compelling stories within the side quests. From solving a complex murder to pacifying a town run rampant with animals, the side activities stand out from the pack. 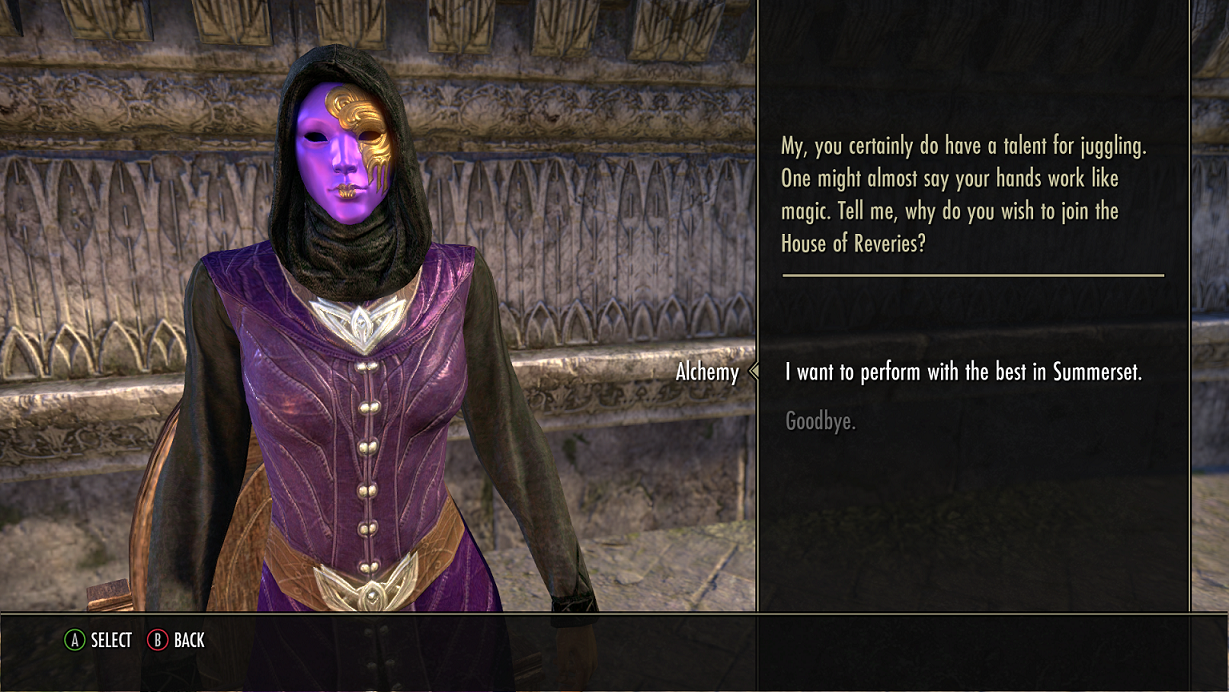 Perhaps it’s the noticeably personable characters that dole out these quests, adding a weight to the narratives of each. In the base game, non-playable characters usually fall into the same cookie-cutter formula you see in other MMOs. While these mostly bland characters still exist to fill out towns and shops, the other NPCs with speaking lines are often incredibly personable and unique. In fact, I consider some of the quests in Summerset to be my favorite of the franchise, even when including games like Oblivion and Skyrim.

Building on the Formula

While Summerset adds new crafting options, new skill lines, and other gameplay features, there’s nothing radically different about this expansion in comparison to the base game. For the most part, you’ll still complete quests given to you by NPCs, take on world bosses with a few friends, and delve into public dungeons with even larger groups. Thankfully, Summerset is just as interesting to play as it is to look at, with most quests and activities being loads of fun.

It’s also important to note just how helpful and welcoming most of The Elder Scrolls: Online community is. Whenever I needed some help fighting a world boss, which usually requires four or five players, I simply asked for help in the in-game text chat. Within a few minutes, it was very likely that a large number of high-level players would show up and happily help me in my endeavor. There’s always the potential that I got incredibly lucky and wound it up in a particularly nice server, but I like to think that every server is just as helpful as mine was. 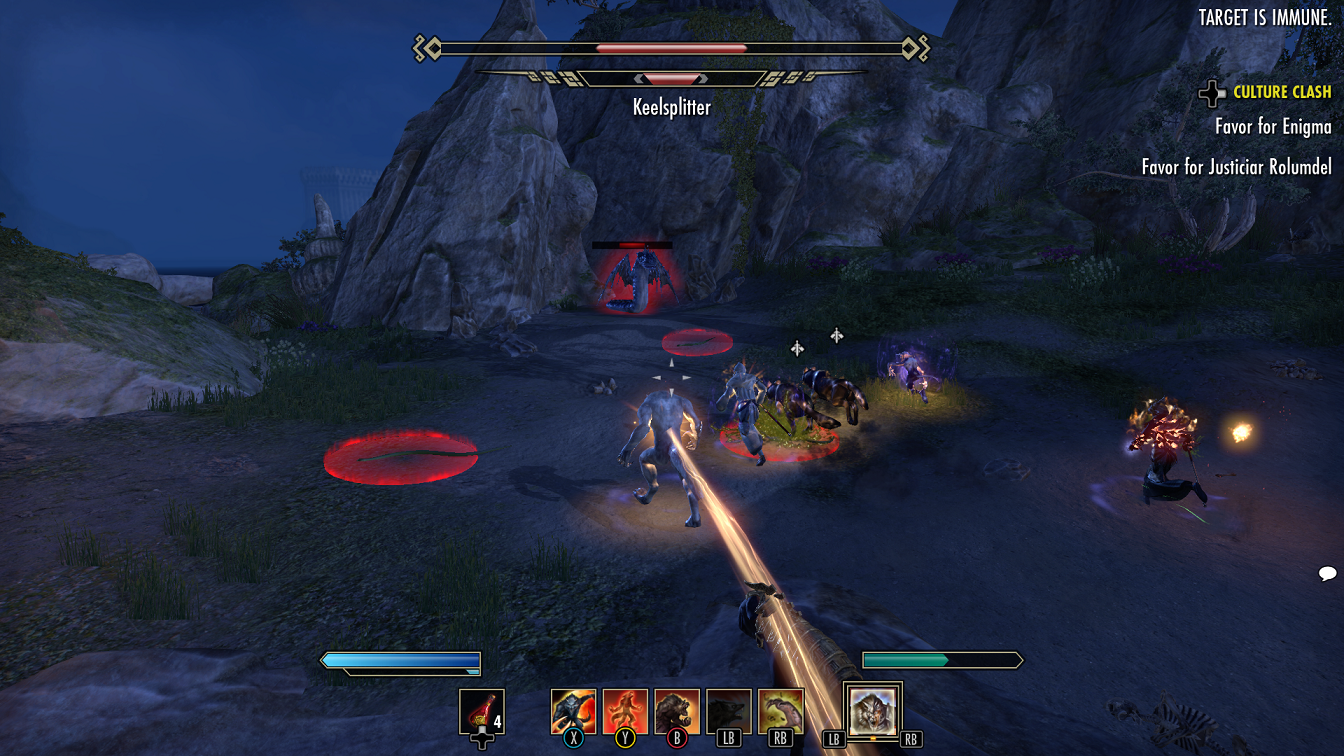 For those interested in crafting, Summerset allows you to pick up jewelry crafting for the first time. It works pretty much the same as the other crafting systems in the game, allowing you to collect resources and craft your own rings and necklaces. You can enchant these accessories with magical bonuses, much like you can with any armor, adding useful stats on to your character.

Summerset also introduces a new skill line that involves the Psjic Order, and dumping skill points into it results in some pretty awesome abilities.  I won’t spoil most of the fun stuff, but the Psjic Order allows you to do some very useful and downright fun things, like reversing time.

The island of Summerset is truly a beautiful place to explore, and one that is ripe with color. The land is lush, with rolling hills full of colorful trees, flowers, and wildlife. Like the High Elves that call it home, everything about Summerset seems a bit more of magnificent than necessary. Major towns like Shimmerene are home to massive spires and towers, with twisting alleys below.

In a stark contrast to the other explorable lands in Tamriel, Summerset feels peaceful and well-maintained. It’s such a consistently pleasant and sunny place that I was thrown off guard when I encountered even a simple amount of rainfall. 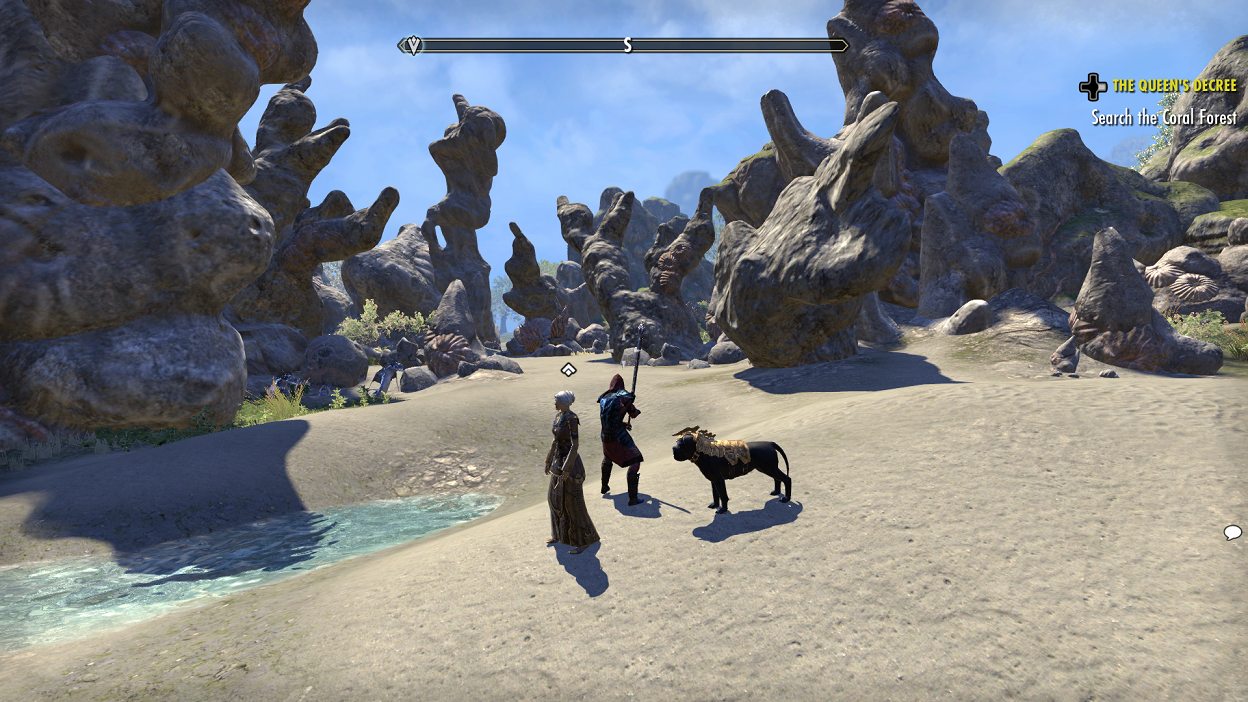 The Bottom Line on The Elder Scrolls: Online – Summerset

In my humble opinion, there is no better time to hop into The Elder Scrolls: Online than now.  There’s no monthly subscription fee to keep up with, the game is full of quests and content, and there are more people playing now than ever before.  After spending more than 50 hours in Summerset, I can also easily recommend the expansion, as it one of the best MMO expansions I’ve seen in a while.  It might not radically change the overall gameplay or introduce any wildly new features, but the consistent quality of content and embracing community make it a treat to play. 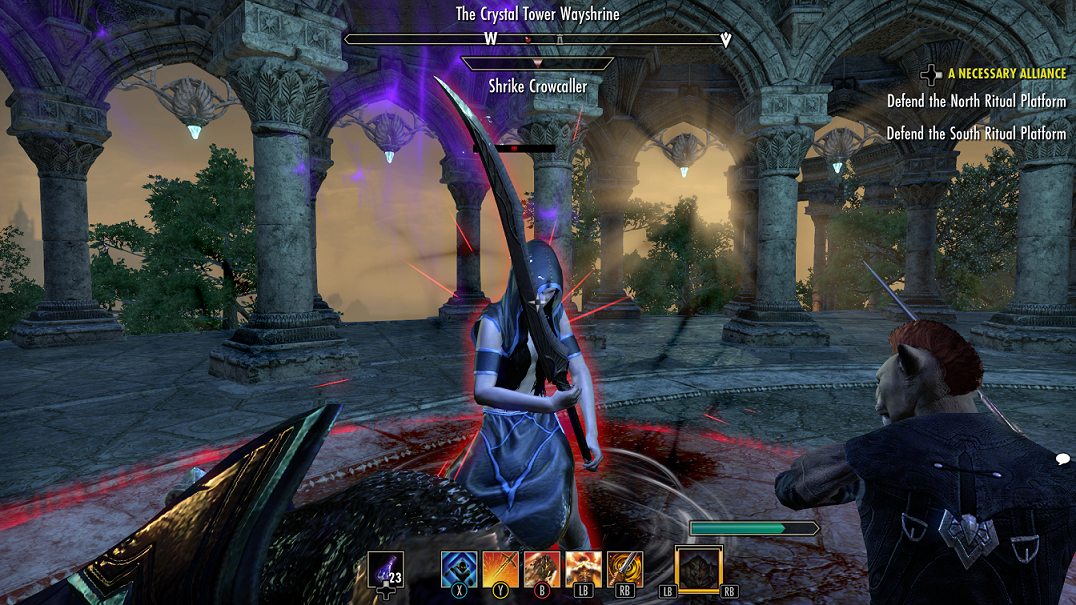 Whether you’ve played The Elder Scrolls: Online before or not, Summerset is a fun and enjoyable RPG with some quirks.  It’s admittedly a bit basic by some MMO standards, but I feel like The Elder Scrolls: Online is a great starting place for newcomers to the genre, and a treasure trove of great content for fans of the series’ lore.  In my time with Summerset, I had a blast exploring the island, got surprisingly wrapped up in its narrative, and raided dungeons with friends.  It’s not a perfect experience; there’s still plenty of bugs, glitches, and the occasional server issue.  However, I found the experience to be wholly worth the price of admission, and haven’t had this much fun in an MMO since my World of Warcraft days.