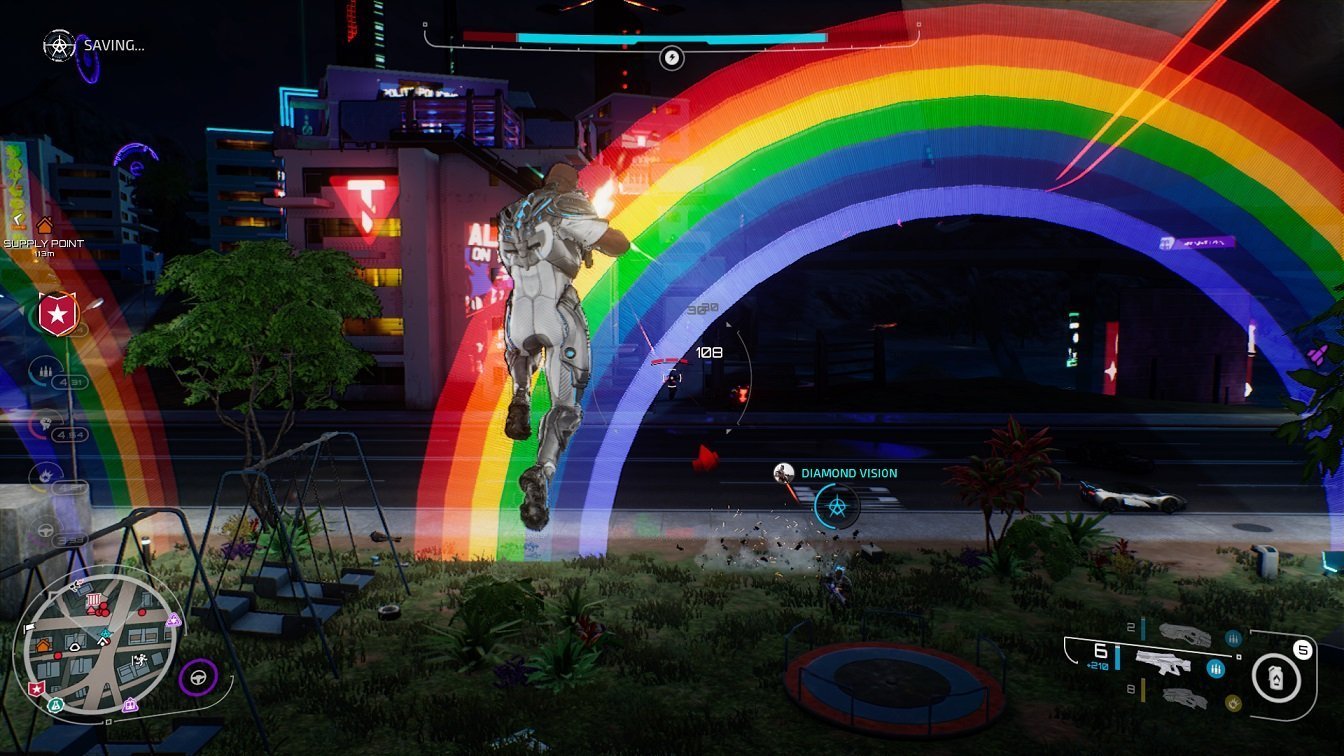 After many delays and a full console generation since its predecessor, Crackdown 3 has finally arrived on the Xbox One. Like the previous to Crackdown games before it, Crackdown 3 is an open-world action game that is highly stylized and over the top. Players assume the role of Agents, highly specialized crime prevention personnel, ridding the futuristic city of evil goons. There are collectibles to find, side activities to complete, and a slew of third person run and gun action. The original two Crackdown games weren’t wildly inventive, but they were plenty of fun to play. Does Crackdown 3 distinguish itself enough despite the dated formula, or is this a sequel that should’ve been shelved?

Cracking Down on TerraNova

The story in the Crackdown franchise has never been its strong suit, and Crackdown 3 does nothing to change that trend. Once again, you jump in the boots of a highly powered Agent and take down criminals in the neon city of New Providence. Your main objective is to overthrow TerraNova, an insidious mega-corporation with deep ties in New Providence. To do so, you’ll have to dismantle various branches of the organization and wipe out the lieutenants in charge.

Each branch of TerraNova provides various enemy designs, bosses, and visual styles. From brutish enforcers to towering construction mech suits, you’ll fight a wide array of enemies. However, their motivations are always the same. Lieutenants are little more than unique bosses to take down, complete with a stylish comic book cutscene entrance. In the grand scheme of things, it doesn’t matter who they are or why they’ve been labeled as a criminal. Your one and only goal is to kill them. 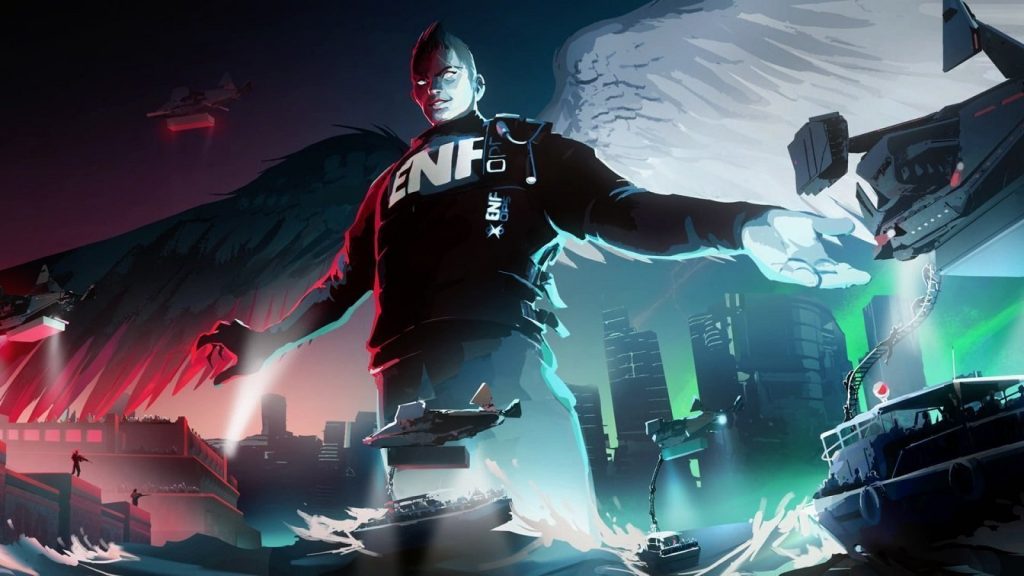 That said, for as light as the narrative is, it functions fine as a glue to hold together the gameplay. It’s nothing to write home about and predictable in almost every way, but Crackdown 3 seems to understand that. Cutscenes are brief and the action is rarely halted. It’s the Michael Bay action movie equivalent for video games. The art design of the cutscenes is cool enough to keep you interested before being quickly shuffled towards the next big explosion.

How to Build an Agent

As you scour the city and attempt to repel TerraNova, you’ll find yourself engaging in a decent variety of activities. The main map is split into various regions, and regions are populated with points of interest, races, and collectibles. You can traverse the environment by foot, thanks to your noticeably high jump height and boost dashes, or take to the streets in a variety of high-tech cars. You’ll usually want to roam around on two legs, as cars don’t feel great to control and quickly become the slower choice of transportation. This is mostly due to Crackdown 3 leveling system, which gives you experience based on how you play the game.

Your agent has a few defining characteristics, which level up as you use them in gameplay. For instance, your agility skill determines how high you can jump, and is upgraded by spending time running around the city and finding agility orbs. Blasting down foes with any number of weapons improves your guns skill, and tossing frag grenades usually results in some explosives experience. Alternatively, you can punch enemies directly in the face or ram them with your car, upgrading your strength and driving skills respectively. 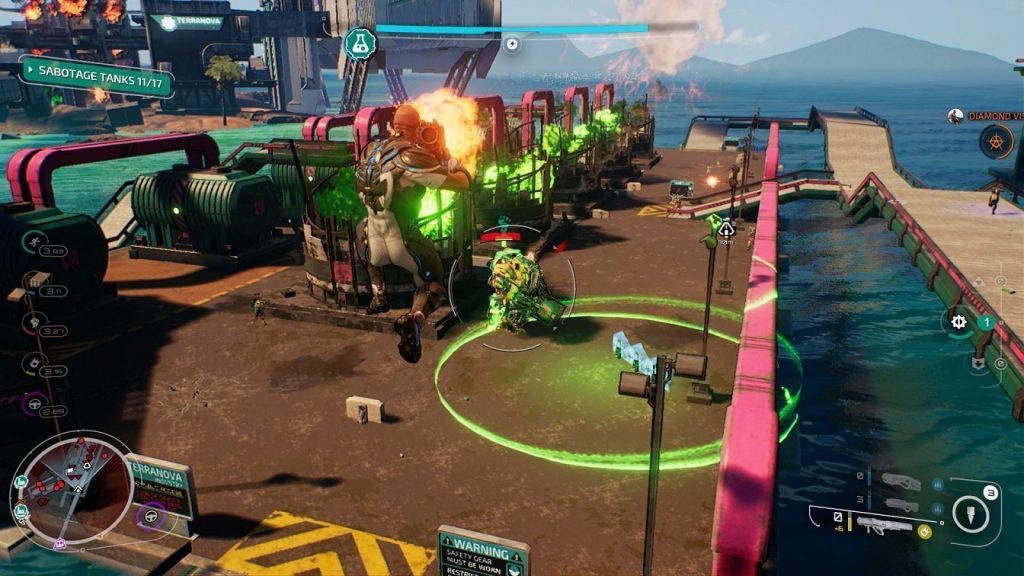 In this way, Crackdown 3 feels like it gives the player options in how they want to approach the overall experience. However, you’ll spend most of your time running around and collecting orbs, shooting down enemies and throwing grenades. Since this is the most effective way of dispatching enemies, these skills will quickly level up faster than others, giving you even more reason to continue using them. Leveling up a skill often unlocks a unique ability, such as air dashing or the strength to pick up cars and large objects.

Crackdown 3‘s gameplay structure is mainly a loop of collectible hunting and compound clearing. There are various points of interest on the map, color-coded to represent various enemy factions and lieutenants. There are armored car depots that you’ll need to sabotage, chemical facilities to shut down, and imprisoned civilians to set free. These activities, along with a few others, will make up the main bulk of your gameplay experience. Some are more enjoyable than others, but most activities are fun enough to keep you engaged. Hunting for orbs remains a fun distraction, and a nice way to justify deeper exploration of the map. The only real frustrations arise while scaling propaganda towers; massive structures meant to test your jumping skill. The platforming mechanics work fine for general traversal, but lack the polish needed for more challenging jumps. You’ll often find yourself overshooting jumps, then battling with the shoddy ledge-grab mechanics as you try to recover. 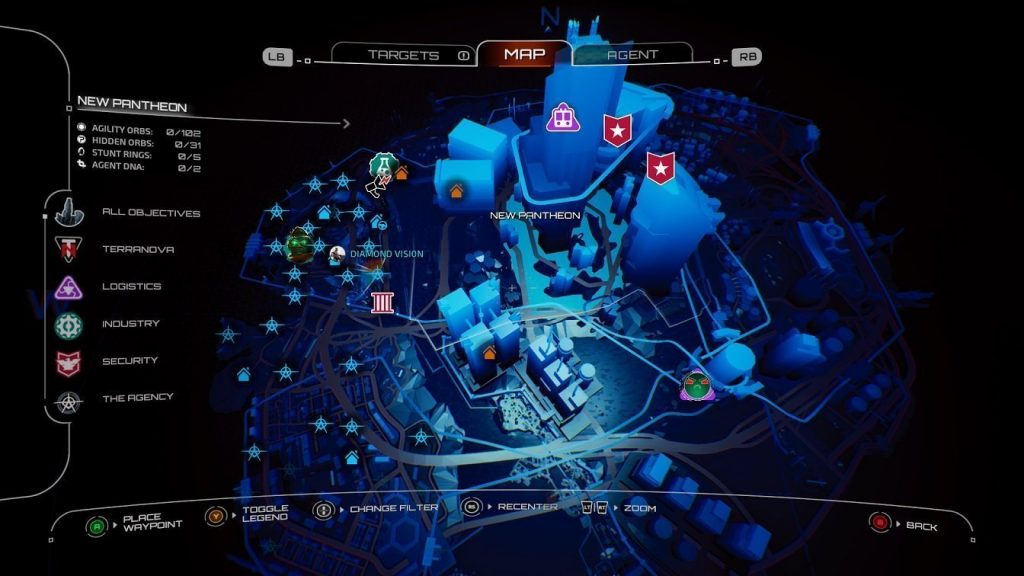 Regardless of what activity you’re undertaking, the experience is normally the same. You’ll approach a location either with guns-blazing or descending in from the rooftops. Areas usually need to be cleared of enemies, which is easily accomplished with the game’s lock-on targeting. Once you’ve locked onto a target, you can even focus on specific limbs for optimal damage (granted your gun skill is high enough). You’ll begin with some basic weaponry, but after some exploration and experience, you’ll soon be kitted to the teeth. You’re able to hold up to three weapons and a gadget, including cryo-grenades, health pools, and more. Missions often require some mayhem; whether that means blowing up cars, removing generators, or blocking machinery with heavy objects. Once you’ve completed a location, you simply move onto the next nearest one, occasionally stopping to grab hidden orbs or complete races. Although the gameplay loop is fun in a mindless action sort of way, it’s anything but unique. Overtaking enemy facilities is enjoyable enough, especially if you have a fun co-op partner along for the ride, but the experience can grow stale very quickly. The lack of an interesting narrative places most of weight on the quality of gameplay, which is equal parts entertaining and frustrating.

Besides the lengthy campaign, Crackdown 3 also offers a small competitive multiplayer mode. It’s oddly offered as a separate download from the campaign, as it relies heavily on Microsoft’s cloud processing technology. Unlike the campaign, buildings in multiplayer are fully destructible. Destruction is cool and dynamic, but it’s rarely a focal point of matches. There are only two modes available, Agent Hunter and Territories. Agent Hunter is a standard 5v5 team deathmatch mode, but you’ll have to secure your kills by picking up dropped enemy badges. Territories is the same thing you’ve been playing since Halo 2 or Call of Duty: Modern Warfare. Various capture points on the map are up for grabs, and you and your team must capture and defend them. Gameplay is incredibly quick, but requires little skill due to the lock-on aiming mechanics. 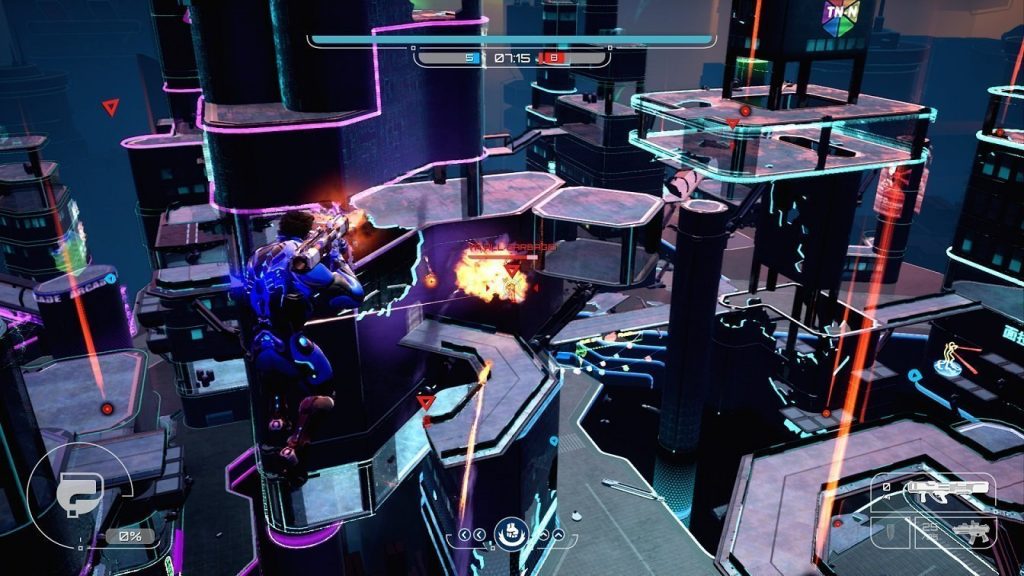 Beyond playing a single match to blow off some steam, Wrecking Zone does little else to keep players interested. The arsenal of weapons is small, there are only three maps to play on, and any sort of progression is non-existent. There aren’t any leaderboards to climb and you can’t party up with your friends. Character customization is basically 20 different faces, with no changes to your armor or aesthetic. Wrecking Zone is as bare bones as they come, and its primary function seems to be as a tech demo for Microsoft’s cloud processing tech. It’s enjoyable for a few matches and some easy achievements, but beyond that, just steer clear of Wrecking Zone.

When the action gets going in Crackdown 3, things get pretty intense visually. What starts out as a simple third person shooter quickly evolves into a super hero simulator. New guns offer ridiculous amount of firepower, which in turn produce glorious displays of fire and chaos. Guns like the Decimator, a homing launching that shoots out dozens of tiny cluster missiles. Destroying enemies always results in a small shower of colored experience orbs, punctuating kills with a nice colorful spray. 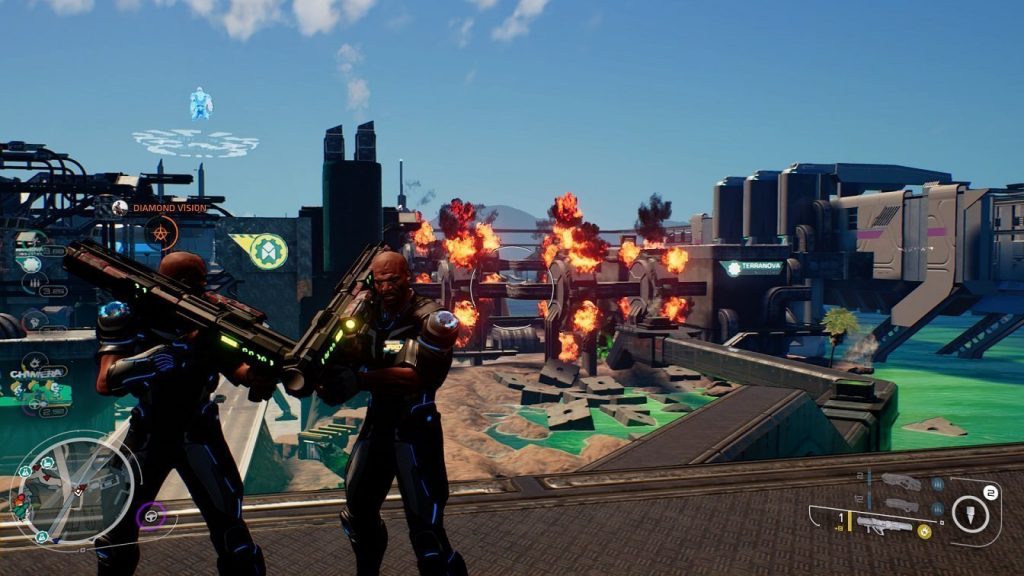 This destruction all takes place around the city of New Providence, which is both futuristic and modern in its design. The city is comprised of various regions, ranging from packed streets of skyscrapers to impoverished slums. The whole city is connected by a monorail system, which you can easily traverse by running atop the rails. There’s a lot of verticality to the map’s design, which offers a noticeable sense of scale. Leaping and bounding around the map looks and feels cool, even when things can get choppy.

To that point, Crackdown 3 has some issues with its technical performance. Your overall experience will vary depending on console or computer of choice, but Crackdown 3 has a tendency to drop frame rate and feel generally unpolished. This is doubly true for the cooperative online, where network lag only compounds the issue. This affects both the overall gameplay and visual quality, which really hurts the momentum of the experience.

The Bottom Line on Crackdown 3

In many ways, Crackdown 3 is the same Crackdown game you played in 2007. Gameplay is a mixture of insanely hectic action and colorful explosions, with a big helping of platforming as well. Technical performance hinders the experience, which can be awfully repetitive at times. The competitive online called “Wrecking Zone” is a bit of a wreck itself, feeling very tacked on and unnecessary. Despite these shortcomings, Crackdown 3 is still fun to play, especially with a co-op partner. If you enjoyed the original game, or other wacky open world titles like Saints Row IV, Crackdown 3 will be mostly satisfying. 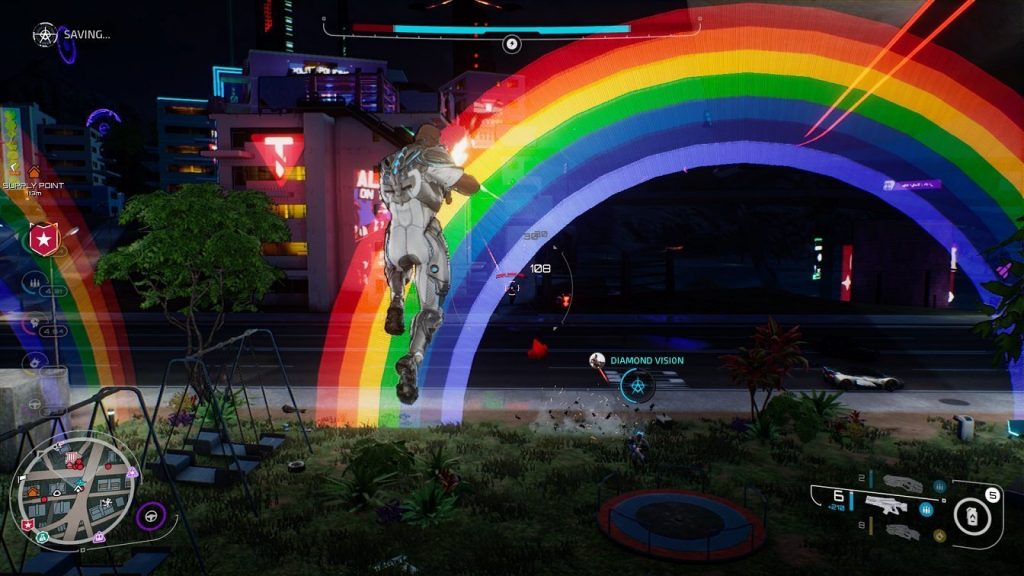 The game’s inclusion on Xbox Gamepass softens the general disappointment, as I’m much happier paying a the monthly fee instead of the full cost of the retail game. Overall, the main story will take you anywhere from 10 – 15 hours, depending on how much orb hunting and side activities you take up. The multiplayer is only passable for a few rounds, and tarnishes the overall package. Crackdown 3 isn’t a bad game, but it’s far from the AAA breakout hit that fans might’ve been hoping for. While it doesn’t innovate at all in terms of gameplay or design, the fundamental gameplay loop is still engaging.