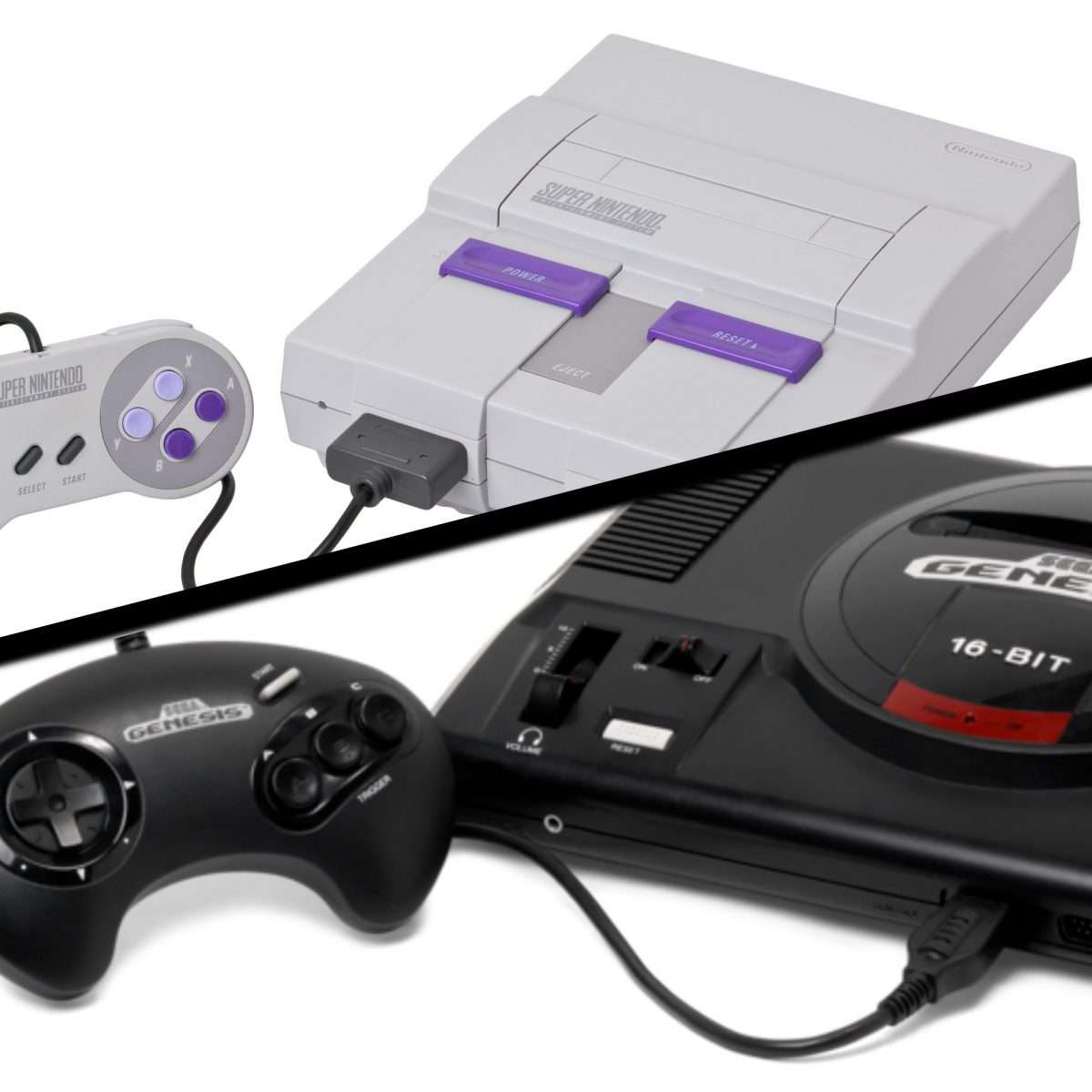 Console Wars – SNES vs Genesis – Which is better?

When Nintendo revitalized the home console market with the NES they had very little competition. Their brand is still so tied to gaming that many non-gamers still refer to any video game as “Nintendo”.

SEGA’s Master System was a decent first effort, but the Genesis was the first real challenger to Nintendo’s throne. The Genesis released in 1988 in Japan, coming to North America the following Summer. It wasn’t until Sega of America started bundling their first hit Sonic the Hedgehog with the system that they saw any real success. Sega of Japan failed to replicate the North American success and this divide would cause problems later, contributing to their future console failures and eventual withdrawal from hardware development.

The SNES hardware had the clear advantage in colors and sprites, as well as more flexible hardware that was able to expand with newer tech included in game cartridges. The Genesis hardware was much more rigid, but when designed with intent, could still produce effective results.

From the PS2 era on, all platforms had an even playing field of including any sound they wanted. Back in this generation however, the hardware was extremely different.

The SNES was able to produce actual samples, although they had to be densely compressed to fit on the relatively tiny cartridges. This was a huge leap forward from the NES four-channel bleeps and blops. Gamers could now hear timpani, violins, and more. However, the suffocating amount of compression often resulted in a muffled sound, especially when compared to the brash Genesis FM Synthesizer.

Now Mario could dance along to a ragtime band playing authentic stride piano.

Final Fantasy could build an orchestra of samples to give the production depth and magesty,

The Genesis used a Yamaha FM chip that lacked the realism of samples and produced a much harsher sound in comparison. It’s strengths were drums, guitar, synths (obviously) and overall clarity. When designed with these limitations in mind, composers could still produce compelling pieces of music.

Yuzo Koshiro was a masterful composer able to squeeze sublime sounds from the FM chip. His work on Streets of Rage remains a fantastic example.

The Genesis did hard rock and metal extremely well.

The Genesis could rock the house like no other, but the SNES was an impressive leap from the 8-bit era and was much more versatile .

When qualifying a console’s library there are several factors to consider. The N64 had a relatively small offering but it had enough excellent titles to warrant a purchase and still remains plugged into my television’s otherwise useless composite inputs. The PS2’s vast library allowed developers to take risks on eclectic games and still manage a profit.

SNES is the clear winner here. Featuring some of the all-time greatest RPGs and dozens of classic games that still hold up today. The Genesis had a large library, but it’s selection of truly excellent games drops off quickly. Both libraries are deep, but the SNES is the easy pick.

The Genesis added a ‘C’ button but lost the ‘select’ of the NES. The six-button was a great design later on for fighting games but once again the SNES dominates.

The SNES launch controller needed no improvements and introduced design elements we still see on ever controller today. The four face buttons and shoulder buttons are the modern gaming standard and we owe it all to this grey and purple beauty.

The Genesis was a worthy contender and ended up being Sega’s only successful console. The competition it provided pushed the industry forward and provided a unique perspective. It was a great system for the era and still remains a good pickup with a large enough library to keep retro players satisfied.

Categorically however, the SNES was superior in nearly every way. It’s lush color and sound felt like a much larger leap forward and allowed developers great flexibility. If I could pick just one console from this era ( and perhaps any), I’d be happy with a SNES controller in hand.