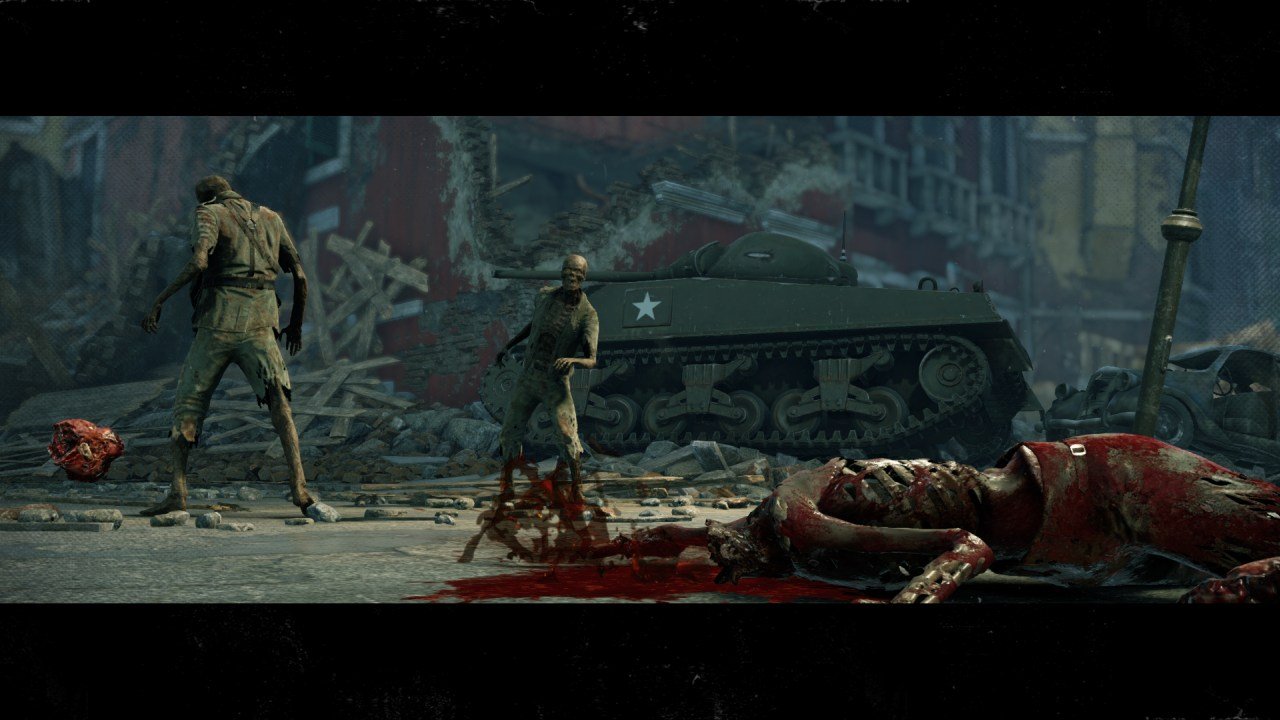 Zombie Army 4: Dead War is a third-person shooter and a spin-off of the Sniper Elite series, both developed by Rebellion Entertainment. In this sequel to Zombie Army Trilogy, up to four players are tasked with eradicating the persistent threat of an undead Nazi army, created by Hitler in a last-ditch effort to win World War II. This quirky shooter embraces a wackier tone while still offering tactical gameplay with realistic guns and accurate physics. While it’s true that zombie games are pretty overplayed by now, there’s always a unique title that manages to surprise us every now and again. Zombie Army 4: Dead War feels reminiscent of games like Left 4 Dead, World War Z, and The Divison. Does this cooperative shooter succeed where other zombie games have failed, or is this a poor imitation of the landmark games that it takes inspiration from?

The story in Zombie Army 4: Dead War picks up shortly after Zombie Army Trilogy. After harnessing the powers of the occult to raise an army of zombies, Hitler is defeated by a group of Allied fighters and exiled to Hell. Despite the loss of their commander, the battalion of undead continues to roam the Earth, generally making a mess of the place. As the streets begin to fill with more and more corpses, another group of soldiers takes it upon themselves to eradicate the remaining zombie threat.

While Zombie Army 4‘s story likely won’t win any awards, I appreciated the context to the levels and objectives therein. In terms of plot, it’s far more interested in setting the scene for the action to play out rather than deliver meaningful characters. To that point, the game is appropriately self-aware and goofy, resulting in more than a few chuckles during my playthrough. Zombie Army 4 is a story that doesn’t bring anything new to the table, but still manages to produce an enjoyable experience nonetheless.

As a spin-off of the Sniper Elite series, Zombie Army 4 tries to create a more tactical experience instead of an all-out action title. The game is best played with a four-player team, but you can tackle it solo if you prefer. In each level you’ll move from one objective to the next, battling with hordes of zombies in relatively tight spaces. While you’re free to spend time eliminating as many zombies as possible, there’s always a good sense of urgency to keep you moving forward. Most of the primary weapons are accurate, semi-automatic rifles, with crowd-clearing weapons like shotguns and assault rifles filling secondary roles.

You can also plant various traps, including mines and electric wires, which are important when an objective calls for defending an area. These traps can be used in tandem with various explosives and environmental traps to do some serious damage, ramping up your combo meter and gaining lots of points. Environmental traps are especially good for dealing with large groups and can be especially fun to use.

Generally speaking, Zombie Army 4 rewards precision and skill over explosive offense. It’s usually smart to sit back and pick off the most dangerous foes while constantly checking your flanks, ensuring that your teammates are focusing on objectives and are properly healed. Health can be replenished using med-kits and special abilities or regenerated very slowly over time. Either way, you won’t be able to take a bunch of damage and regenerate it easily, so it’s better to play it safe in most instances. Even on the easiest difficulty, Zombie Army 4 provides a decent challenge, which only becomes frustrating if you try to use brute force to accomplish everything.

Zombie Army 4 encourages replayability through an enjoyable system of unlockable weapon upgrades, perks, and cosmetics. After picking one of three characters, each with a handful of unique passive skills, you’ll create a custom loadout. There are three primary weapons to choose from, four secondary weapons, and three side-arms. Each weapon can be upgraded at safe houses, which act as checkpoints between story chapters. Upgrades include increased damage, bigger magazine capacity, and even elemental rounds. While the upgrade system isn’t as complex or varied is it could’ve been, it does add a great feeling of progression to the experience.

You also have an overall player level which increases as you complete levels, challenges, and play rounds of Horde mode. This level directly ties into most of the other unlockable goodies, including perks, weapon skins, and item mods. Perks fall into three categories, either offensive, defensive, or “other”, and can grant you boosts in stamina, damage resistance, ammo capacity, and more. Perks can also be upgraded by completing challenges tied to them, furthering the benefits you receive while they’re equipped. Along with the item mods that make your traps, grenades, and med-kits more effective, perks are another way that Zombie Army 4 keeps the gameplay experience feeling fresh.

Knee Deep in the Dead

Your journey to defeat the shambling army of the undead takes you to a variety of locations across Europe, ranging from historical to fantastical. This road trip of rampage takes you from the canals of Venice to an overrun zoo in Croatia, as well as a few other environments I won’t spoil. In total, Zombie Army 4 offers nine unique levels, with each one broken up into chapters. The levels are a good mixture of the expected war-torn city locales and some more inventive environments, with some fun set-piece events to try and make each stage memorable.

Levels are filled with collectibles to discover and zombies to kill, and thankfully, there’s a good variety in both. Collectibles include documents with added story context, fun and colorful comics, upgrade kits for weapons, and creepy zombie hands to destroy. Collectibles are often hidden in rooms and areas off the beaten path, encouraging you to explore your surroundings instead of dash through them. In addition to the standard walking corpses that make up the majority of the zombie army, you’ll have to fend off snipers, grenadiers, suicide bombers, and an assortment of heavy, armored generals. New zombie types are introduced throughout the game, so there’s always something new to kill in every level.

Waves of the Horde

Horde modes have become a staple in the cooperative shooter genre, providing straightforward action without any of the narrative frills. Zombie Army 4 tries its hand at the wave-based formula in its own Horde mode, with four unique maps to slay a multitude of zombies on. Just like in the campaign mode there are three difficulty levels to choose from, as well as an “enemy setup” that adjusts spawn-rates based on how many players are in a session.

In comparison to other Horde modes as seen in series like Gears of War and Call of Duty: Black Ops, Zombie Army 4‘s Horde offering isn’t all that remarkable. Apart from the handful of new areas to satiate your zombie death-lust in, it’s all very by-the-book. You start the match with only a sidearm, gaining new weapons as they appear in supply drops around the map. Players must fend off waves of enemies, with each wave growing in difficulty. Every few waves a new area of the map opens up, providing more space to breathe but fresh spawn spots for enemies.

Once you’ve completed 12 waves you can escape the map or continue, but I often found myself ducking out at the dozen mark. I had fun for a match or two, but never felt compelled to return. Like most of Zombie Army 4: Dead War, your enjoyment will vary depending on if you’re playing as a group or solo, as things can get repetitive quickly without the cooperative element. Any experience you gain in Horde ultimately helps you in Campaign as well, as your overall player level affects both modes. At the very least, Horde is a good place to pump up character and blow off some steam.

While Zombie Army 4 provides a consistently enjoyable zombie-killing romp with your buddies, it’s got a few problems that hold it back. The visuals are serviceable, and while the variety in level design is appreciated, the textures and lighting leave a bit to be desired. A few graphical bugs also forced me to restart the game from a previous checkpoint a couple of times, which quickly grew tiresome. That said, Zombie Army 4 runs pretty well, without any hugely noticeable frame rate issues to speak of.

Zombie Army 4 also suffers from a pretty common problem with cooperative shooters; repetitive objectives. To the game’s credit, there are some memorable sequences that stand out from the norm, but most of the game revolves around defending areas, clearing areas, and waiting out timers. Whether you’re waiting for a bomb to be built, gas to be drained, or a door to be unlocked, Zombie Army 4 loves to pit you against an overwhelming number of zombies while you’re stuck in one place. While this provides ample opportunities to unload on the undead, it can grow stale after a while.

If you have a group of friends to play with, Zombie Army 4 provides enough entertainment to make it worthwhile. The unlockable weapons, perks, and upgrades result in a fun progression system that keeps the experience feeling new, adding some significant replayability to the package. The Horde mode is about as standard as they come, but is still enjoyable enough to warrant a few rounds.

If you’re looking for a mindless, somewhat silly, and gory romp that lets you blast through nazis like there’s no tomorrow, Zombie Army 4: Dead War fits the bill nicely. While it has its fair share of setbacks and issues, I had plenty of fun defeating Hitler’s undead army. Depending on what difficulty you’re playing on, the entire campaign should only take around a dozen or so hours. As long as you have some friends along for the ride, those dozen hours are good some gratuitous, bloody fun.