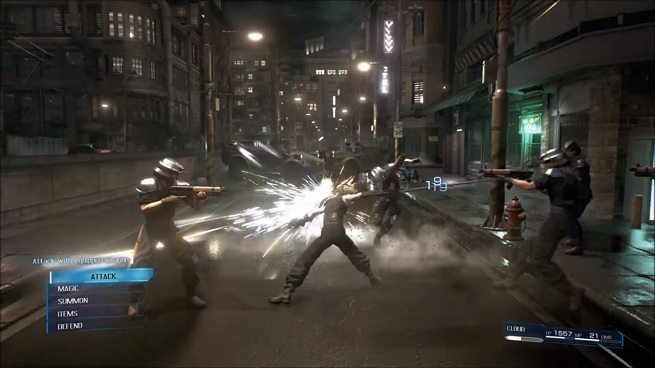 Like many, Final Fantasy VII was my first foray into the series and holds a special place in my heart. I think FF X is better constructed, but VII will always be my personal #1. A second playthrough in 2015 held up just as well, reminding me all over again why I loved the tone, materia system, tortured characters, and of course the melancholy music.

Although the PC/PS4 port with higher res visuals and a handy speed-up is a fantastic way to experience the game on modern machines, the idea of a full-on remake has been kicked around for years. Square finally (and perhaps years too late) announced a modern reproduction to a hype explosion at E3 2015, but in 2018, we’ve seen virtually zero progress. That fact and many more have me quite worried a failed remake could tarnish the legacy of one of the most universally praised games in history.

For years, Nomura was known mostly for FF character designs. He was promoted to Direct a wack-load of confusingly named Kingdom Hearts games to divisive results. Final Fantasy XV (previously known as Final Fantasy Versus XIII) was arguably his biggest profile project but he was replaced by Hajime Tabata partway through the disastrous 10-year production.

I’m about 95% through FF XV and I’m amazed they were able to cobble together such a strong first half out of development hell, but the rushed ending and story gaps betray the trouble behind the scenes. Square Enix already spends crazy amounts of money on their games, seeing their biggest property fly out of control is a bad sign all around.

I obviously don’t have information on how much Nomura is at fault for XV’s problems, but the optics don’t look great. Combining that with how ridiculously convoluted KH became, and his recent resume of being in charge fills me with dread.

A Difficult Remake, with Room to Fail

Bluepoint is the highest profile remake studio and they got their by staying as true to the original game as possible while updating the visuals to a beautiful sheen. Shadow of the Colossus has entirely new textures but maintains some of the original engine underneath and feels extremely close to the original. It feels like the original does in our nostalgia tinted memories.

Instead of a simple recreation however, Square has decided to completely reimagine the gameplay structure. That means action-based combat and full 3D environments. I loved the gorgeous and unique pre-rendered backgrounds, that often blended 2D art, real-time CGI effects, and 3D models in striking ways. While I’m definitely curious to explore my childhood memories in full 3D, this must increase the workload astronomically and introduces ample potential to disappoint. FF VII’s original Director Yoshinori Kitase himself even commented that “To get FFVII to something like FFXII…it would take ten times as long”. That could be a simple exageration but FF XV was shockingly shorter than usual entries in the franchise, while looking detailed as heck.

I found XV’s real-time combat engaging enough for dealing with less dangerous mobs of enemies, but the most difficult challenges often left me feeling confused of the optimal way to play and avoid taking damage. Action games need a clear communication of what the player is doing wrong. XV often felt unclear and unfair, although the easy challenge and abundance of healing items pushed me through.

Maybe Nomura will learn from XV’s combat mistakes to produce something truly engaging, but why ditch what worked for something unproven? The remake is celebrating the original, by changing it?

WTF? Is Telltale making this? This announcement was the first warning sign of an impending disaster. FF VII is indeed a long adventure with a wide variety of scenes. To recreate everything with the obsessive modern detail Square proposes, will be a staggering undertaking. Of course they could have went the simpler route and simply recreated the actual game people love, but they had to shoot for the stars. Perhaps they had hi-res archives of the original pre-rendered backgrounds before they were compressed to fit on the PS1’s 320×240 display? Would simply recreating the backgrounds and 3D models not have been much easier and more fitting to the spirit of the original?

Kitase dropped a worrying quote (translated by silliconera) “But of course as we advance through the episodes, it’ll only be natural to have quality that is fitting for the next generation [of when the episode releases].” Am I crazy or is he talking about Episode 2 or 3 ending up on the PS5??

The E3 announcement was a bomb dropping on the industry. Reaction videos of fans screaming still haunt my dreams, all over a completely non-playable teaser that barely resembled the Midgar it was based off. But it’s 2018 and we’ve barely heard or seen a thing other than odd development announcement, like Nomura learning he was the Director at the same time we did. Or development moving from third-party CybrConnect2 whose only tie to Final Fantasy was an android game about Cloud’s motorcycle.

Here’s the only other trailer we’ve seen so far, also released in 2015, but this time featuring actual gameplay.

I suppose the argument is that we already have an HD port of the original, so this is a chance to do something new. To use voice acting, real-time action, and polished 3D worlds to reach a broader audience. Like I previously said, I’ll be right there with the rest of ’em eager to ride the shiny new FF VII like it’s the shiny new attraction at the Golden Saucer, wait they gotta make all those mini games too? Good luck Square!