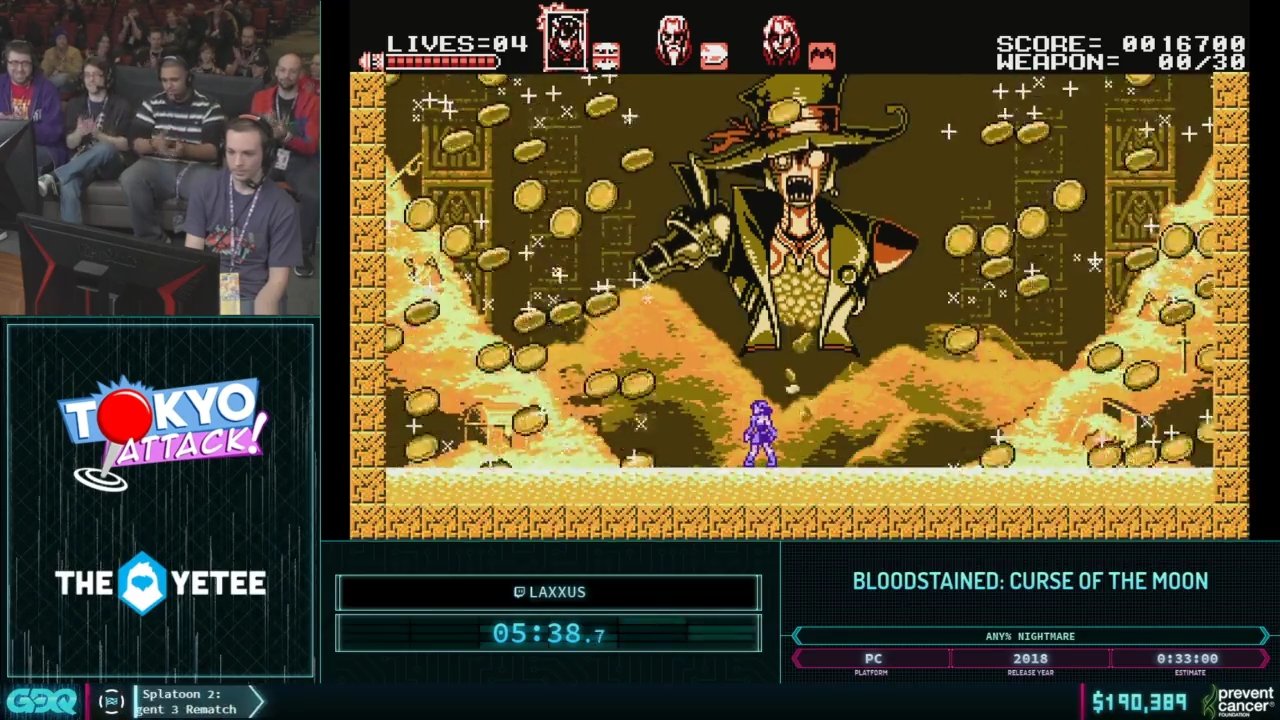 Day two was another explosive day of speedrunning at Awesome Games Done Quick 2019. Viewers were treated to a slew of awesome speedruns, all to raise money towards the Prevent Cancer Foundation. As the midnight mark rolled from day one to two, we were treated to a great run of God of War II. The late night and early morning gave us some great platforming runs, along with retro blocks for both the Sega Genesis and Super Nintendo. The afternoon was packed with a great Castlevania block, and the rest of the night held a nice variety of more modern titles. By the end of day two, the marathon has raised over $300,000 towards the Prevent Cancer Foundation, and absolute feat. More days of speedrunning are yet to come, so while we wait for the rest of the marathon to unfold, let’s check out the best runs from day two. If you’re looking for some quality runs or a place to start watching, this list should provide you with some decent choices.

You can watch the entire marathon live over at twitch.tv/gamesdonequick, or check out GamesDoneQuick’s Youtube channel for replays of every run. 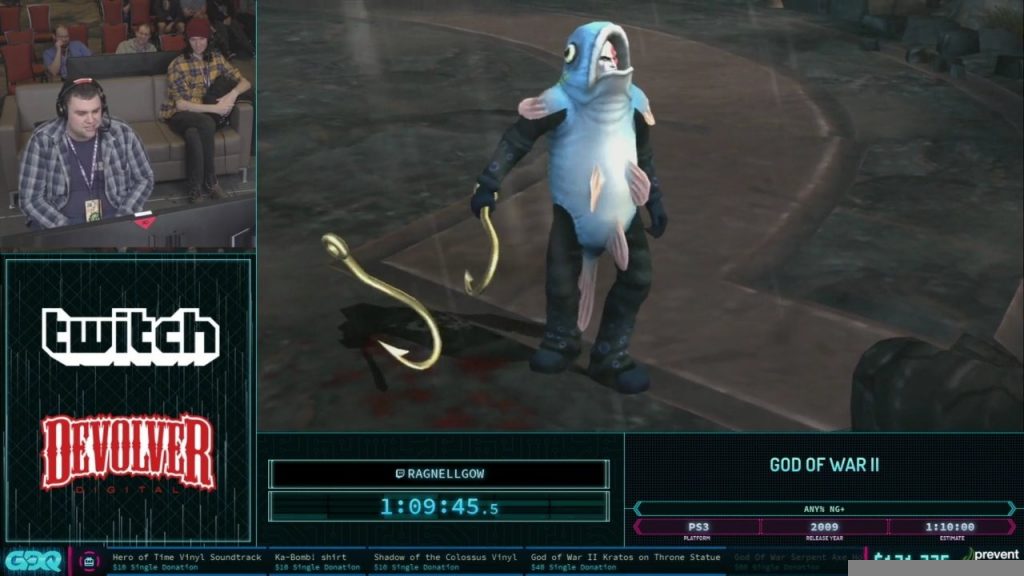 My love for the God of War franchise was exemplified by this gory and glitch-filled run of God of War II by RagnellGow. Although the new God of War title on PS4 has gotten its appropriate credit, many dismiss the original PS2 trilogy. While God of War II is not my favorite of the trilogy, RagnellGow showed us just how endearingly busted the game can be. Using a variety of out of bounds glitches and unintended tricks, RagnellGow was able to murder his way through the game in just over an hour. An especially hilarious swimming glitch allows RagnellGow to make a ton of progress, and that trick alone makes the run worth watching. For a bit more blood and guts than usual at a GDQ event, check out the God of War II run. 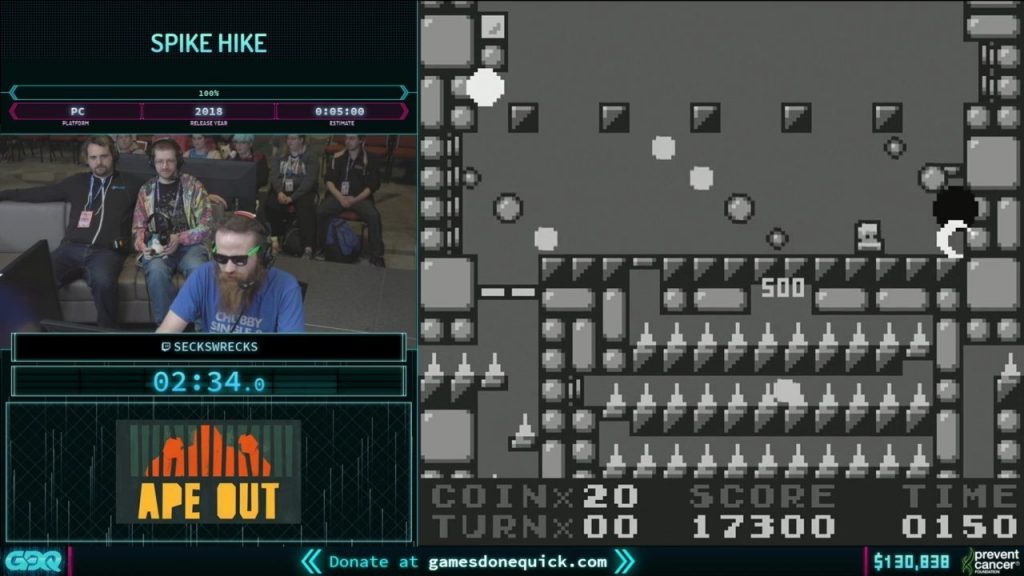 Spike Hike is one of those games that is beautiful in its simplicity. Crafted for an indie games jam event, this basic-looking platformer is both charming and approachable. Despite having the “100%” category, this speedrun is one of the fastest we’ve seen at AGDQ 2019. In just under 3 minutes, runner Seckswrecks shows us how quick platforming and unintended stage-wraps can make a brief game even briefer. The limited controls and simplistic nature of the game makes it a great choice for new speedrunners as well, so check it out if you’re interested in running yourself!

Cat Bird (any% All Worlds) by MrUppercaseT

Despite being a simple platformer with a cute and cuddly main character, the AGDQ 2019 speedrun of Cat Bird is historical for a number of reasons. It’s the first mobile game to ever be shown at a GDQ event, and is also the debut of the iPad as well. Although GDQ has been putting on these marathons for years, we haven’t see any mobile game speedruns until now. Runner MrUppercaseT showed off this quick and quirky platformer, highlighting its laid back nature and vibrant colors. Making his way through countless levels by dodging saw blades and obstacles, MrUppercaseT showed us that the iPad has sufficient speedrunning options. 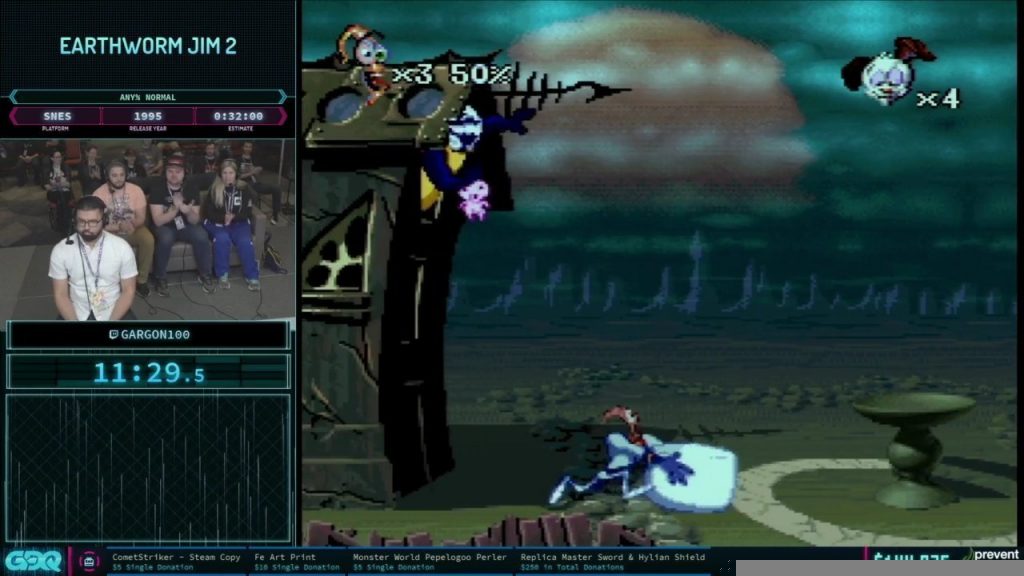 Earthworm Jim holds a special place in my heart, as it was one of the games I spent a lot of time with in my early gaming years. This absurd and irreverant 2D action/platformer is as silly as its concept; a worm in a space suit blasts enemies with his laser gun. Watching Gargon100 battle his way through the wacky world of Earthworm Jim 2 was an utter delight, and provided a nice nostalgic tang to my evening. This was part of a great Super Nintendo/Genesis block, with plenty of other great SNES runs. If you grew up playing SNES or Genesis, definitely check out this run along with the entire block. Refer to the official AGDQ 2019 schedule for complete game listings. 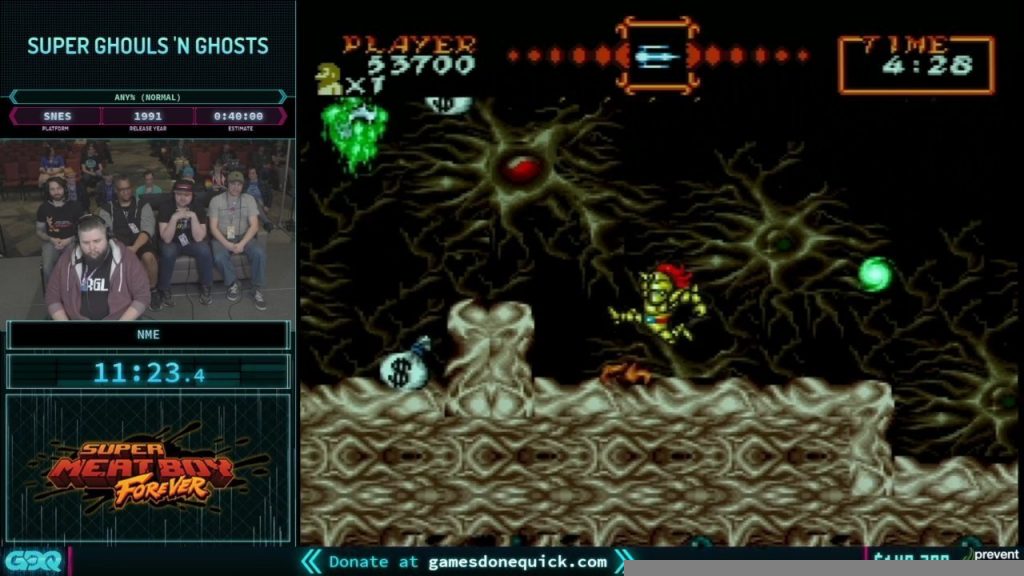 This speedrun provides an instant “wow” factor for me, mainly due to the inherent skill needed to complete the game. Super Ghouls ‘n’ Ghosts is very well known for its incredible difficulty, as most gamers will only remember the first handful of stages. Simply beating Super Ghouls ‘n’ Ghosts is an achievement within its own right, so runner NME’s clutch sub-40 minute run was a pleasure to watch. Controlling the pixelated King Arthur, NME made his way through the game’s multiple levels twice over, thanks to Super Ghouls ‘n’ Ghosts‘ two-game loop. Along the way, he stunned us with expert timing, crafty treasure chest manipulation, and some entertaining commentary. If you’re looking for a speedrun of a classic game with a ton of challenge, look no further than NME’s run of Super Ghouls ‘n’ Ghosts.

Castlevania: Symphony of the Night (Alucard) by Satoryu 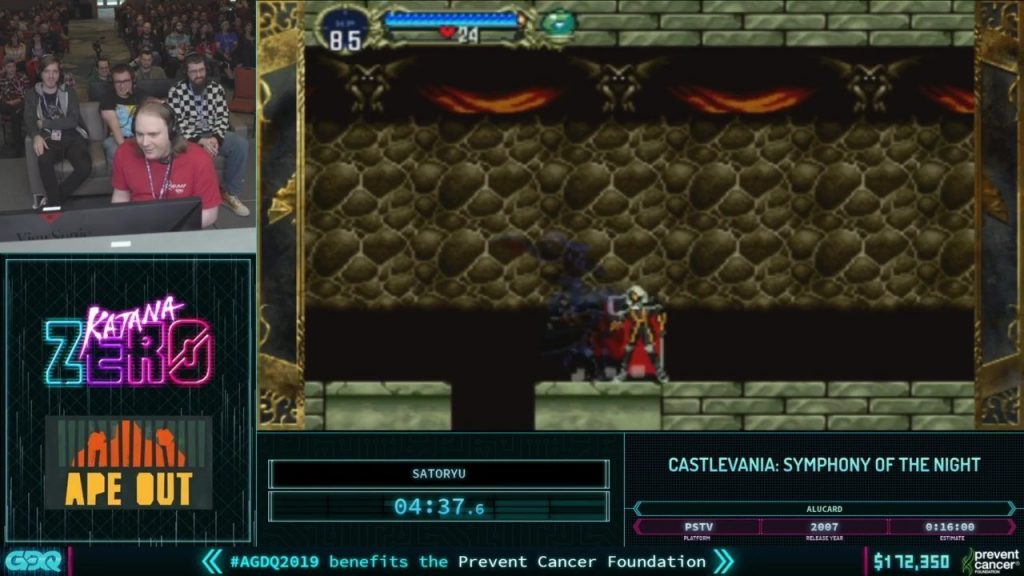 Widely regarded as one of the best Castlevania games ever made, Symphony of the Night has seen its fair share of speedruns at GDQ events in the past. However, this Alucard-category run by Satoryu was performed on the PSTV, a platform which allows them to pull of some new and powerful glitches. Thanks to a handy quicksave glitch, Satoryu was able to transform a game that normally takes hours to complete into a 15 minute vampire-hunting time warp. By pushing the main character out of bounds and executing a precise glitch that utilizes the quick save feature, Satoryu was able to warp around the game’s castle, breaking sequence and gaining progress. Between these major skips and his constant backdash canceling, Satoryu made quick work of this classic Castlevania games. In terms of execution, this is definitely one of the best speedruns from day two of AGDQ 2019.

Bloodstained: Curse of the Moon (any% Nightmare) by Laxxus 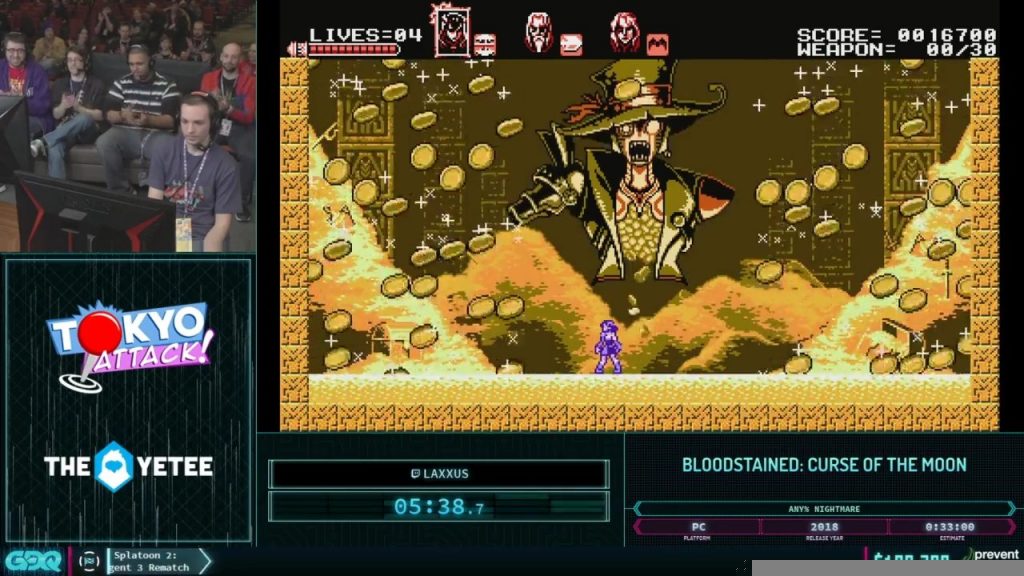 Although I’m not a huge Castlevania fan, I can respect the respect that the franchise has garnered. It wasn’t until the release of Bloodstained: Curse of the Moon this year when I caught the Castlevania bug. It’s funny, since Bloodstained is not a canonical Castlevania game, but rather a Kickstarter goal for the anticipated Castlevania spiritual successor, Bloodstained: Ritual of the Night. This 8-bit styled retro throwback contains insanely cool visuals, excellent character-swapping gameplay, and some undeniably cool Castlevania homages. Runner Laxxus showed off the Nightmare mode of the game, which gives players control of three major characters from the beginning of the game. Using this advantage, Laxxus was able to clip out of bounds, warping around the levels and skipping major portions of the game. When he was in bounds, he demolished the game’s colorful bosses with pinpoint precision, switching between characters for maximum damage. This is an all around great speedrun that’s both technically impressive and visually appealing. As a side note, if you haven’t played Bloodstained: Curse of the Moon, you should. It’s available on most major consoles and PC. 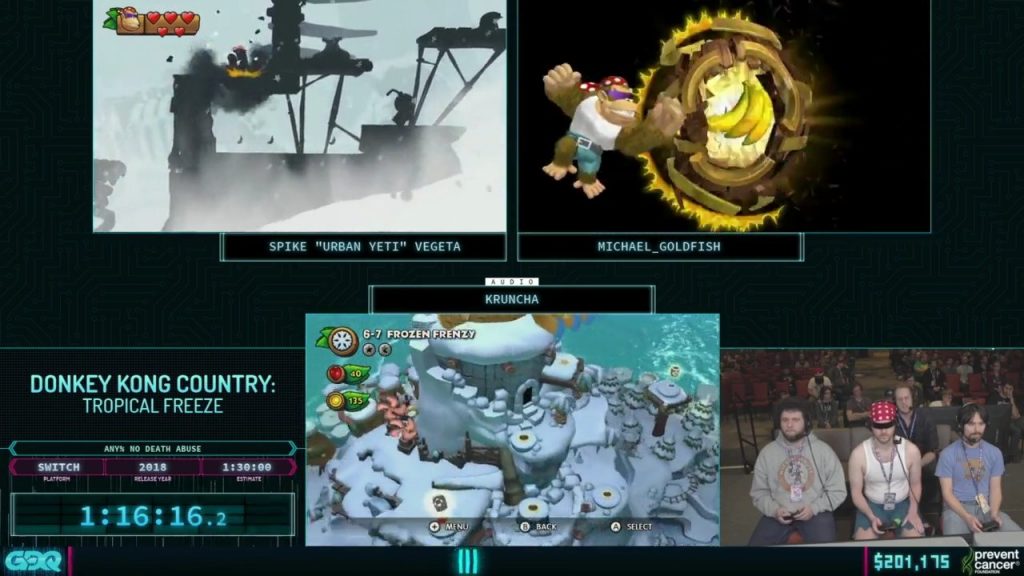 This race was a great combination of colorful and impressive platforming action and quality commentary both comedic and informative. Three great runners stepped up to the plate, all delivering great performances that were both quick and entertaining. Michael_Goldfish and Kruncha held dominating leads while SpikeVegeta showed off some more risky tricks, all the while giving us excellent commentary. The nearly hour and a half speedrun was also expertly explained by a fourth commentator, who easily demonstrated his knowledge of Tropical Freeze‘s many mechanics and optimizations. This is an all around great race, and represents what makes GDQ races so fun.

Those are our choices for the best speedruns from AGDQ 2019 day two! These are just a few selections from the abundant list of speedruns available for your viewing pleasure. The marathon is going strong as it pulls into the third day, so there is still plenty of fun to come. If you want to see the schedule of every game that was played today, be sure to check out the official AGDQ 2019 schedule.

We’ll be back tomorrow for our picks for day three! Until then, don’t forget to follow us on social media (@official90skid) for live reactions and speedrun coverage!