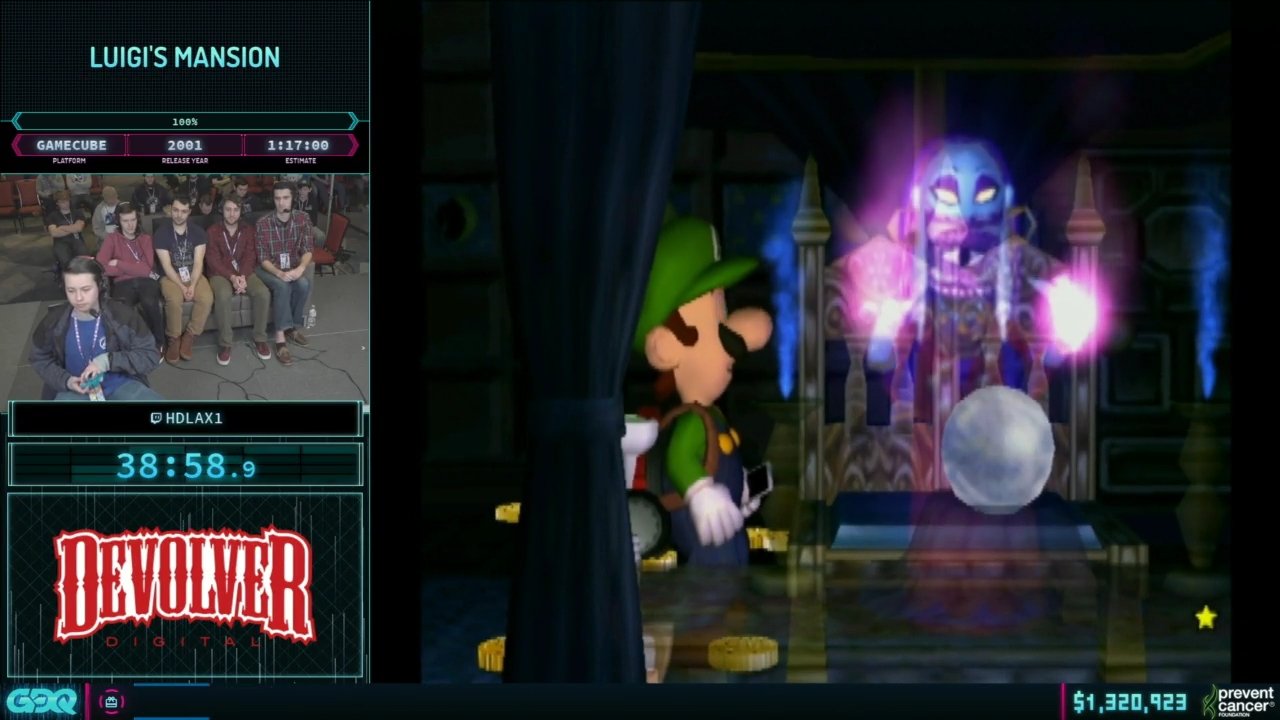 The final day of AGDQ 2019 was simply stuffed to the brim with excellent speed runs and entertaining commentary. Saturday marked the final full day of the marathon, and the schedule was full of fan-favorite speedruns. Throughout the week, viewers and runners donated to the Prevent Cancer Foundation, with the goal of reaching a new donation record. By the time the stream ended, that goal had been met. Overall, AGDQ 2019 managed to raise over $2.3 million in the name of charity. There were hours upon hours of speedruns to check out, so we’ve made a list of our favorites from AGDQ 2019 day seven.

Most of the morning was taken up by the nine-hour Final Fantasy IX speedrun, eventually leading into cult classics Puyo Puyo Tetris and Luigi’s Mansion. Then, we got a double display of pixelated difficulty with I wanna kill the kamilia 2 and the Legend of Zelda: A Link to the Past 1-hit KO runs. The difficulty didn’t let up though, as the marathon continued with Dark Souls III and Bloodborne. Mario was the star of the final hours, as we saw multiple Super Mario World ROM hack speedruns as well as a lengthy 3+ hour Super Mario Odyssey run. The marathon closed out with Super Metroid, an occasional tradition for AGDQ. Overall, day seven was an excellent day to tuck in for speedruns, and we couldn’t be happier with the result. There were tons of runs to watch, so we’ve compiled our favorites from AGDQ 2019 day seven.

To watch any of the runs below or the entire marathon, you can check out the GDQ Twitch VODs. Alternatively, you can watch individual runs as they are uploaded on Games Done Quick’s YouTube channel. The runs below are just a small selection of what was shown on day seven, so refer to the official AGDQ 2019 schedule for the entire list. With that said, here are our favorite speedruns from AGDQ 2019 day seven! 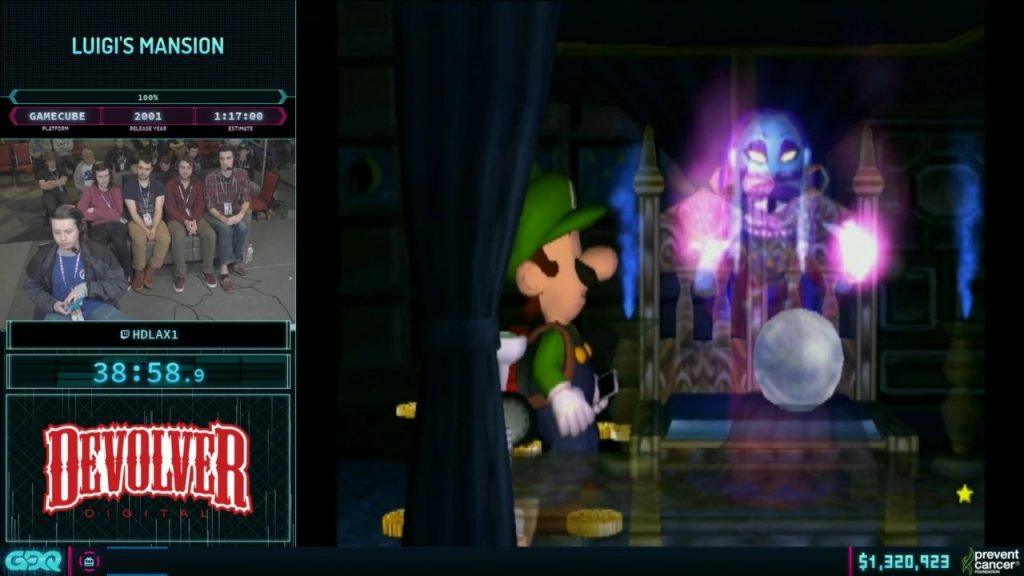 Luigi’s Mansion is easily one of my favorite games of all time. I’m eagerly anticipating the sequel, Luigi’s Mansion 3, which is supposedly releasing in 2019. This 100% speedrun by HDLax1 is a great refresher for those who have played it, and a comprehensive overview for those who have not. This run contained no out of bounds tricks, with the runner relying purely on gameplay mastery alone. In just over an hour, HDLax1 manages to defeat every portrait ghosts in the mansion, collect over 100 million gold, and capture every loose Boo. These three elements comprise the 100% goal, which HDLax1 completed in style. Often times speed runs are far too quick to get a good feel for the actual game. Despite being just over an hour long, this speedrun truly gives the viewer the full Luigi’s Mansion experience at a brisk pace. If you’ve never played this GameCube cult classic, I highly recommend you give this run a watch.

I wanna kill the kamilia 2 (any%) by BBF 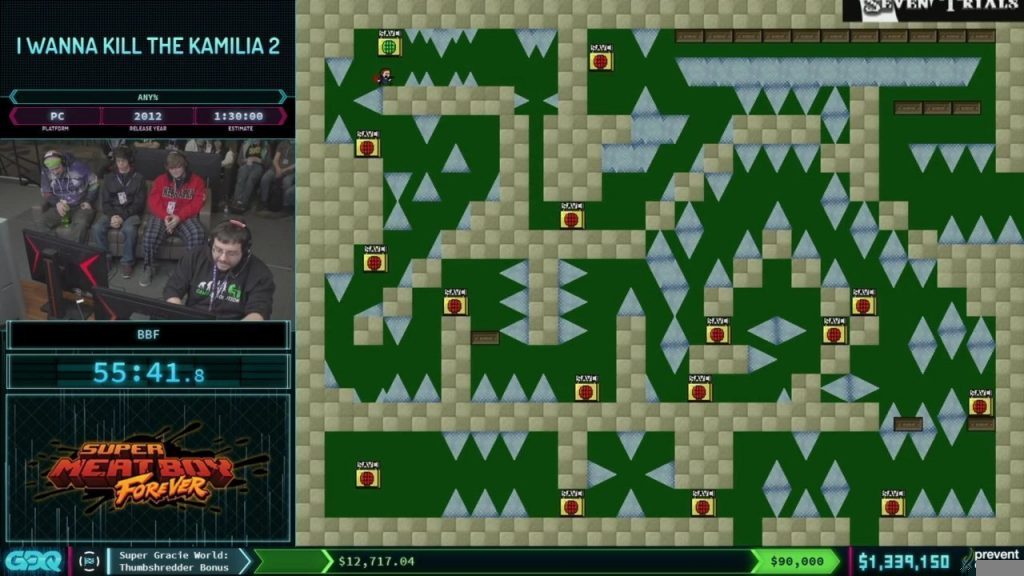 I wanna kill the kamilia 2 is an absurdly hard platforming game that is so frustrating that seemingly no human should play it. If you’ve ever seen a speedrun of I wanna be the guy or I wanna be the boshy, you’ll have a good idea of what to expect. If you haven’t, just imagine the most ridiculously hard Super Mario level you’ve ever seen, and then add about a billion spikes. I wanna kill the kamilia 2 is basically a compilation of the most difficult levels from “fan games”, a platforming sub-genres that is well known for brutal difficulty and basic controls. In theory, runner BBF simply has to jump his way over numerous obstacles and complete the game. In practice, this means making multiple jumps in millisecond-specific timing, all while avoiding obstacles specifically placed to frustrate the player. The resulting speedrun is an exhibition of some wicked platforming skills from BBF, and an admirable amount of persistence. I can safely say that I will never be good enough to beat I wanna kill the kamilia 2. Watching somebody with the appropriate skill play the game is impressive enough for me.

The Legend of Zelda: A Link to the Past (Low% 1-Hit KO) by Xelna

This classic Legend of Zelda adventure is considered by many as the best game ever released on the Super Nintendo. Because of that, we’ve seen this game run at Games Done Quick event time and time again. However, runner Xelna give us a look at one of the most difficult categories of speedrun available. In this run, Xelna aimed to collect as few items as possible, while only having one hit of life. This meant any foe, no matter how small or large, would be able to stop him in his tracks with one attack. This also made navigating the treacherous temples all that more intense, as one false move would spell certain doom. This speedrun is nearly two hours of close calls, crazy boss fights, and interesting techniques for avoiding damage. If you consider yourself a fan of this SNES classic, check out Xelna’s run. 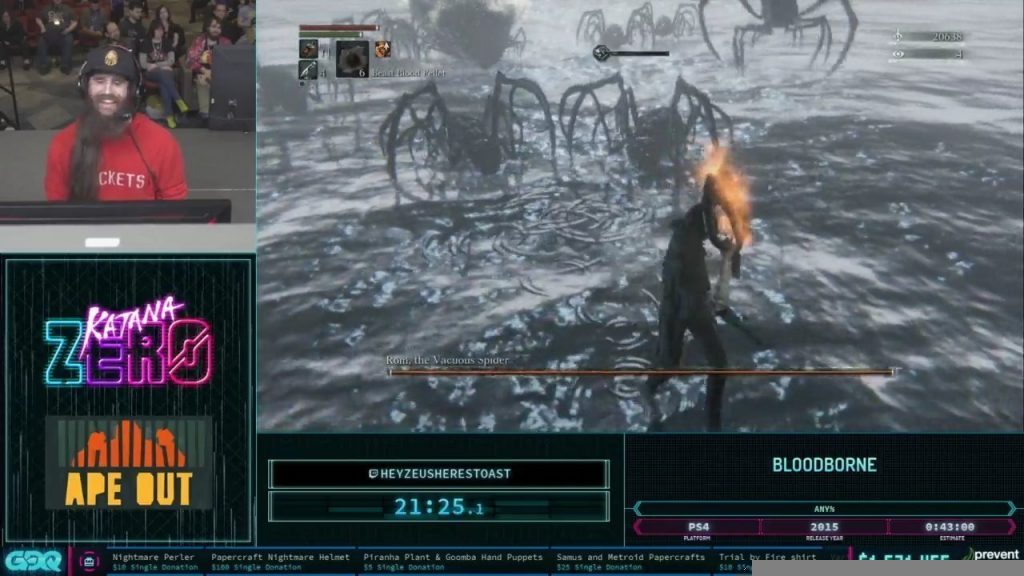 Even if a speedrunner fails most of the glitches or tricks in a game, or fails to perform up to expectations, they can often save it with a bit of personality and charm. That rings true for HeyZeusHeresToast and his run of Bloodborne. Although the preceding Dark Souls III runner was far better in terms of showcasing skips and skill, HeyZeusHeresToast gave viewers a wholly enjoyable run with hyped up commentary. A few bosses and skips caused him headaches, but generally speaking, HeyZeusHeresToast made his way through Bloodborne appropriately quick. Along the way he provided us with a play-by-play, pointing out his attack patterns and routing. Overall, this is a fun run with a highly positive and entertaining runner. That’s what most of us watch GDQ for in the first place. 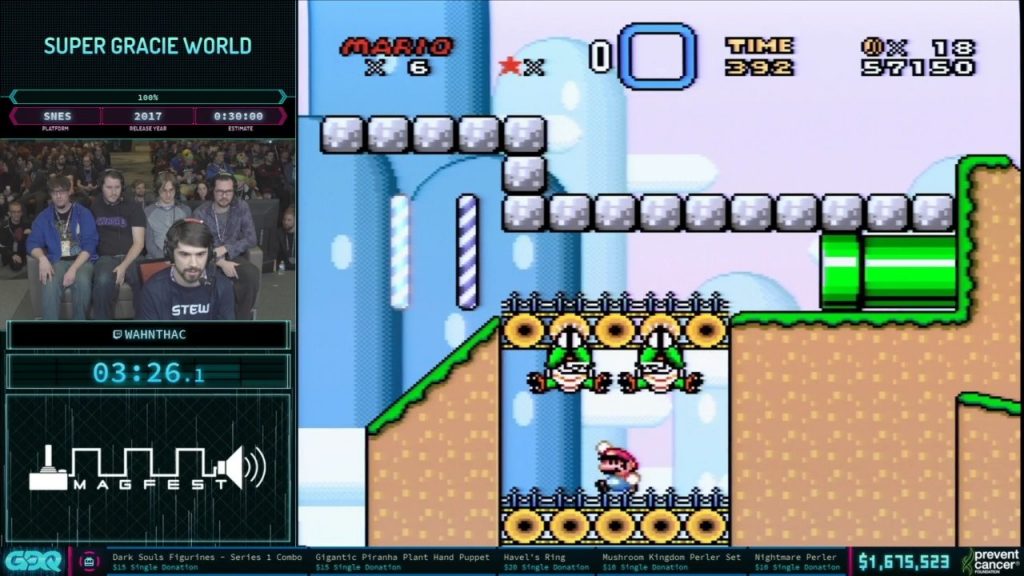 One of the two Super Mario World ROM hacks that was shown on day seven, Super Gracie World was both new and nostalgic. This tough version of Super Mario World featured plenty of tight shell jumps, hidden blocks, and punishing hazards. It was a treat to watch runner Wahnthac achieve 100% completion in under 30 minutes, with added commentary from the game designer himself. It’s a notably difficult mod with some heart and charm, which is easier to follow than other “Kaizo” versions of Super Mario World. Those looking for a classic 16-bit Mario speedrun with a twist should check out Super Gracie World.

Super Mario Odyssey has only been seen once before at a GDQ event. That was at SGDQ 2018, when NicroVeda ran the any% category. This second look at Super Mario Odyssey was the “Darker Side” category, performed by runner Bayleef. This category requires runners to not only beat the game, but also collect the requisite 500 power moons to reach the final world. Despite being over 3 hours long, this run was bursting with awesome movement, impressive jumps, and clutch moments. For fans of 3D Mario titles, this is Mario like you’ve never seen it played before. To call Bayleef talented at the game would be an absolute understatement. Throughout the entire run we got great commentary from Spikevegeta, a fan favorite runner and commentator in the GDQ scene. With Spikevegeta’s comprehensive commentary and Bayleefs godly skill, this Super Mario Odyssey run goes down as one of the marathon’s best.

Those are our favorite speedruns from AGDQ 2019 day seven! By the time the final speedrun has ended, the marathon had reached a new donation record! The entire staff and numerous attendees gathered to say goodbye as donations still rolled in, totaling over $2,390,000.

With that, Awesome Games Done Quick 2019 has come to an end. I had a great time covering the event this year, and hope you had an equally entertaining time following along! I urge you to go back and watch some speedruns you might have missed; there’s always a few hidden gems in the schedule. I can’t wait to be back covering Summer Games Done Quick 2019 in June. Until then, happy speedrunning! 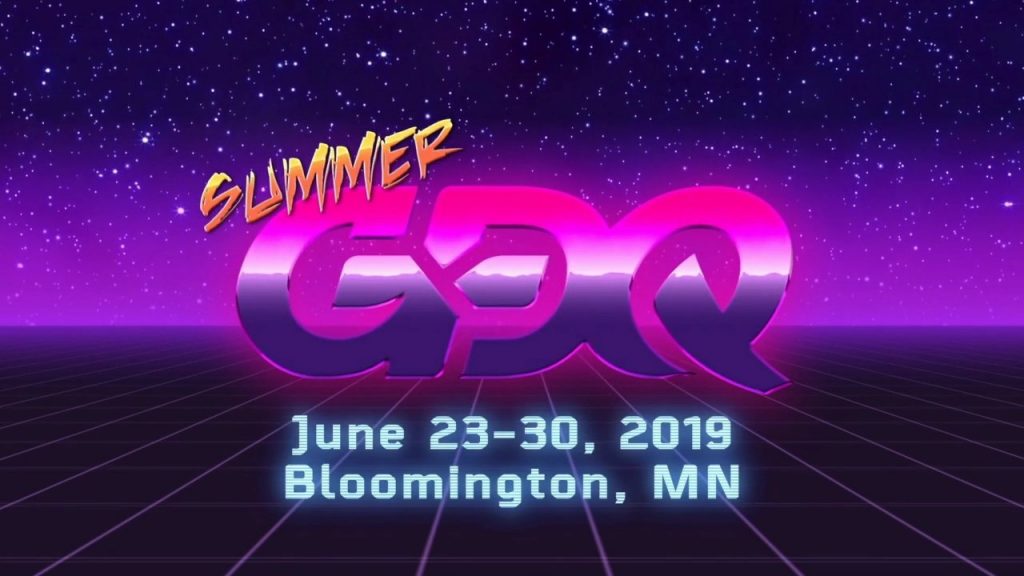