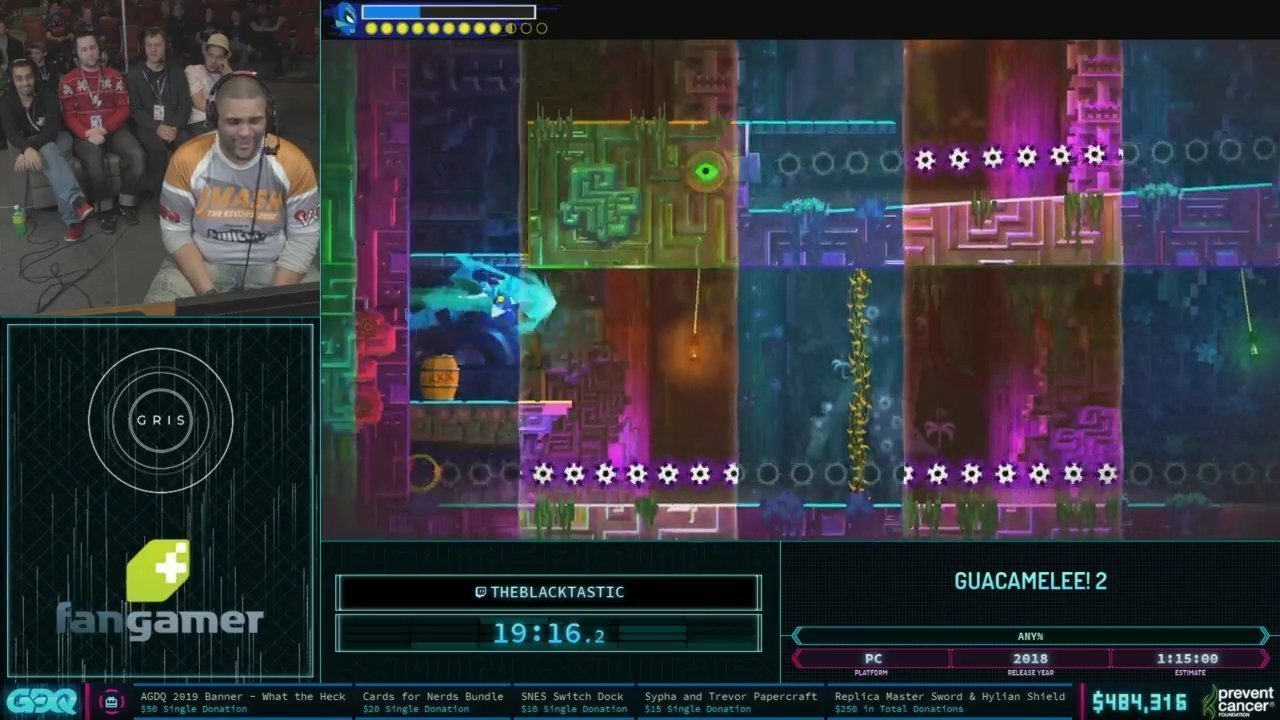 Day four marks the halfway mark of AGDQ 2019, the seven-day long speedrunning marathon running until January 13th. For the past four days, speedrunners have been decimating their favorite games in record time, all in an effort to raise money for charity. At the end of day four, the event has raised over $600,000 for the Prevent Cancer Foundation. There were a number of entertaining speedruns throughout the day, and we’re here to share our favorites with you!

The late night and early morning of day four was full of variety, with speedruns of both modern and retro games. A small indie game block filled the morning, leading into an afternoon of first person shooters and Warcraft. A lengthy Zelda: Twilight Princess took up most of the evening, with the Mega Man block closing out the night. It was a grab-bag day of variety, providing us with a great mix of genres and platforms. I wasn’t able to catch a few of the longer runs (I’ll have to watch Halo: Reach and Twilight Princess later), but the speedruns I did watch were phenomenal.

Keep in mind, the below list is just a small selection of the games that were played on day four of AGDQ 2019. For the full list of games, check out the official AGDQ 2019 schedule. To watch any of the runs (or the marathon live), check out the GamesDoneQuick Twitch channel. You can also see replays of all the runs on the GamesDoneQuick Youtube channel as they are uploaded.

Here are our favorite speedruns of AGDQ 2019 day four!

Trauma Center: Under the Knife 2 (Normal) by TrjnRabbit 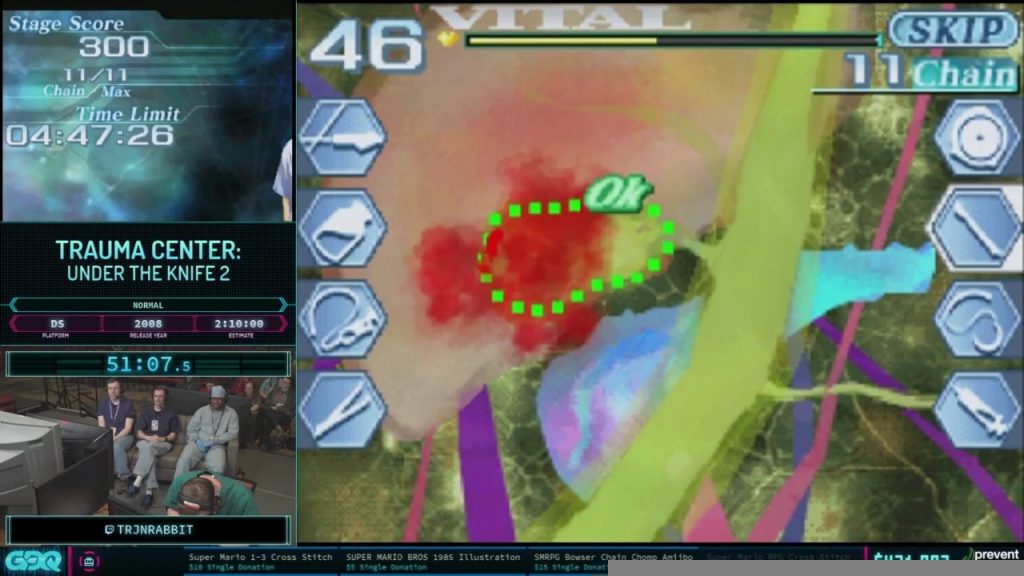 If you’ve ever played this Japanese dialogue-heavy surgeon simulator, you’ll know that it demands precision and accuracy over everything else. Trauma Center puts you in the role of lead surgeon, completing intense surgeries in an effort to save lives. Speedrunner TrjnRabbit did just that, in a blazing performance of speed. The Nintendo DS Trauma Center franchise is a favorite of mine, so I’ve spent plenty of hours failing the ultra-tough surgeries. TrjnRabbit made it look simple, when he was slow enough to watch with the naked eye. He sutured wounds, bandaged broken bones, and replaced livers all in the blink of an eye. If you’re looking for a break neck course in modern medicine, this probably isn’t it. However, it is a highly entertaining speedrun that displays incredible touch screen accuracy. 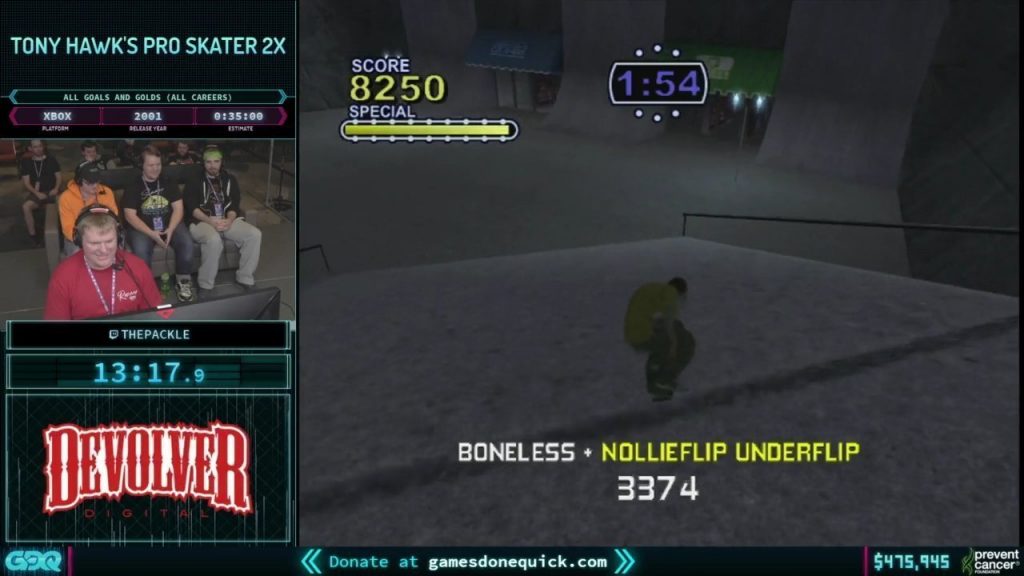 Tony Hawk’s Pro Skater games are always a highlight of any Games Done Quick event. This “beefed up” version of Tony Hawk’s Pro Skater 2 graced the Xbox in the early 2000’s, and runner ThePackle displayed his mastery of the board in a compact and entertaining run. Like other Pro Skater speedruns, you’ll get to see ThePackle blast through every stage objective and skating tournament in the game, grinding and flip-tricking his way to victory. The 2X remake provides a few new changes and optimizations, so it’s a refreshing watch in comparison to the more popular Tony Hawk titles. While he didn’t demolish any world records or perform flawlessly, ThePackle gives us clean commentary and a great demonstration of skating ability.

The Elder Scrolls III: Morrowind (All Main Quests) by Archariat 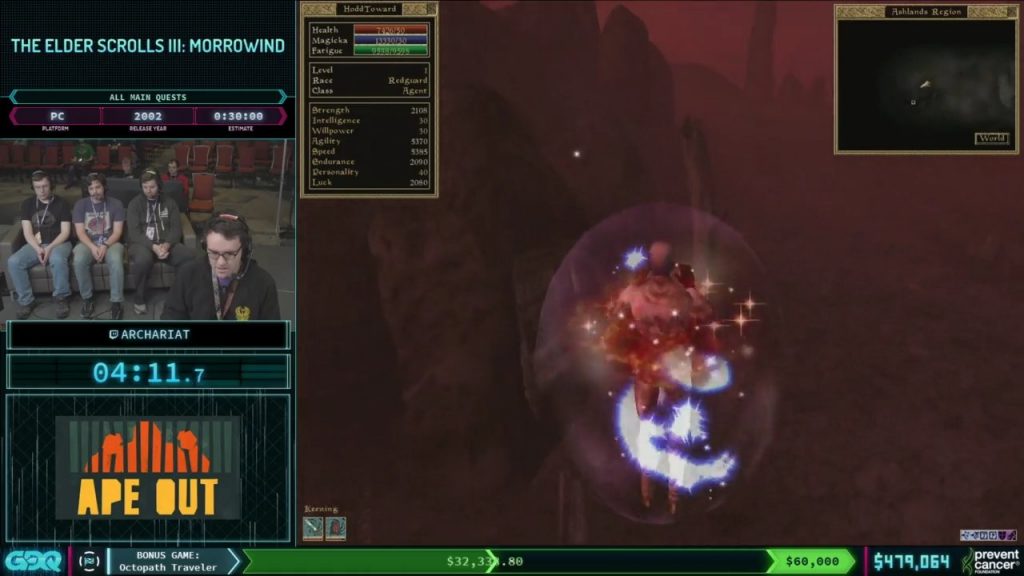 Morrowind is known for the freedom it grants the player, and it’s also known for being pretty glitchy. Runner Archariat capitalized on this buggy nature in his All Main Quests run of the game, finishing the main story in under 30 minutes. This is a speedrun that baffles the mind when you first see it. Viewers who have an intimate knowledge of the game will likely be able to follow along, but newcomers will be completely lost. There are so many out-of-bounds clips and glitches that it’s hard to keep up, as Archariat completes quest objectives in a seemingly arbitrary order. He zooms around the map using a glitch that allows him to amplify his movement, killing enemies and collecting various times. It’s a speedrun that’s so layered and complex that you’ll have to watch it multiple times to keep up. As an Elder Scrolls fan, I always love to see the franchise’s notably glitchy history be used against it.

Guacamelee! 2 (any%) by The Blacktastic 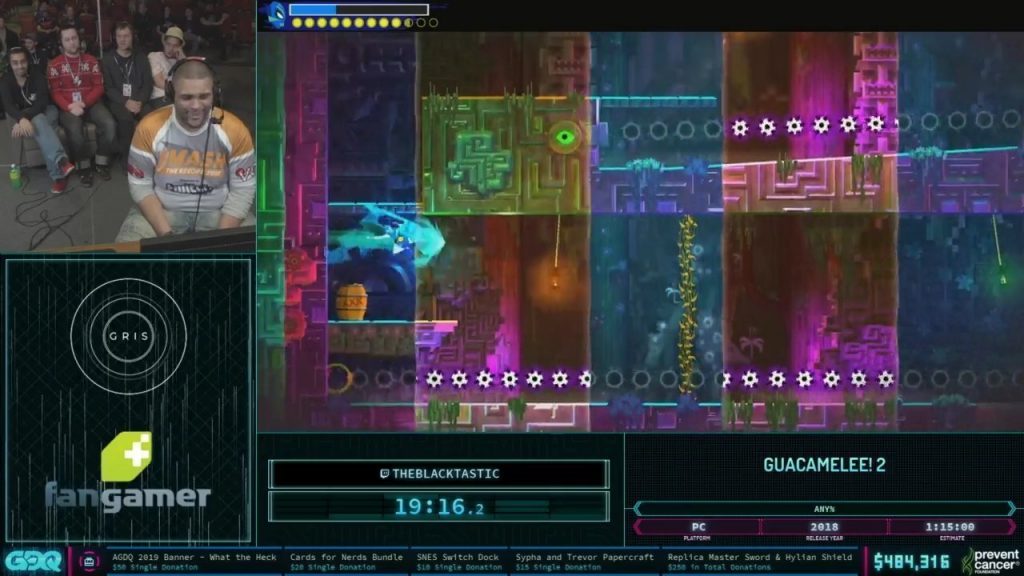 Guacamelee is one of my favorite indie series, and The Blacktastic is one of my favorite speedrunners. Add those two together, and you have an immensely satisfying speedrun. The Blacktastic has brought a lot of energy and excitement to his runs in the past, and this any% run of Guacamelee! 2 was no different. Despite being scheduled early in the morning and running on little sleep, The Blacktastic brought the crowd’s energy up while he performed a difficult and interesting route. Like Morrowind, the Guacamelee! 2 speedrun has a lot of stuff going on. Although they do their best to explain it, the route and glitches can get occasionally confusing. However, Guacamelee! 2 is colorful, full of style, and The Blacktastic’s personality is infectious. It’s easy to lay back and enjoy the chaos, as The Blacktastic shifts his way through multiple dimensions as a Mexican wrestler. The gameplay is hectic and the visuals are vibrant, all smashed together in a glitchy and speedy display of skill.

Semblance (All Orbs one handed) by halfcoordinated 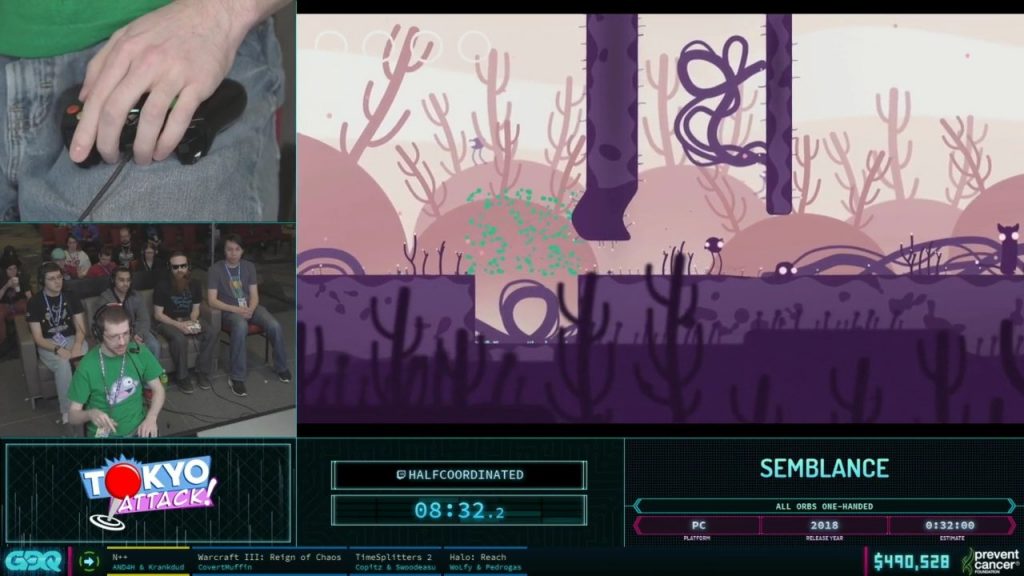 Whenever speedrunner halfcoordinated is at a Games Done Quick marathon, I like to highlight his runs. This one-handed run of Semblance was another great showing from halfcoordinated, who expertly navigated the quirky and cute platformer with ease. Time and time again, halfcoordinated astonishes me with his one-handed gameplay. As a game, Semblance is a basic platformer with some fun mechanics. The main character can run into walls and distort them, creating new platforms to jump on. Halfcoordinated ran the All Orbs category, which required him to pick up the full set of orbs hidden around every level. In general, the Semblance speedrun is laid back and fun to watch. It’s made more impressive by the one-handed modifier, and halfcoordinated’s positive attitude always brightens the mood. 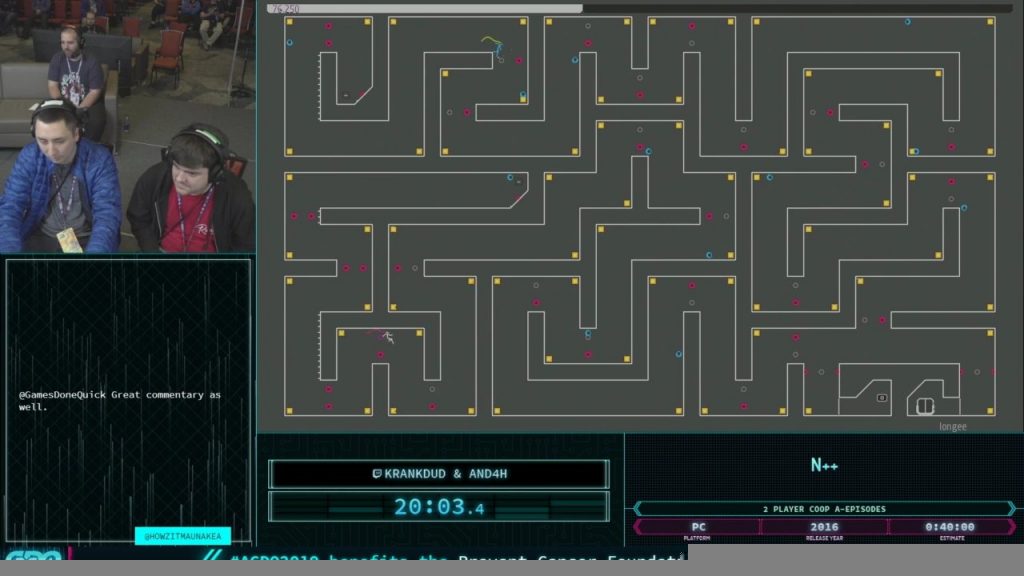 I absolutely love N++. I’ve enjoyed the N series for a long time, but this recent iteration is one of the strongest. For those unfamiliar, the N series are straightforward yet challenging platformers. You play as a stick figure ninja, who is able to jump off walls and run decently fast. That’s it. Using your jumping and running, you must navigate a huge number of treacherous stages. Everything kills you in one hit, and there is barely any wiggle room. Runners KrankDad and AND4H stepped up for their cooperative run, where they ran through the first 100 Co-op levels. This speedrun is an amazing performance from both runners, where they pull off incredibly hard platforming sections and improvise on the fly. Momentum plays a big part in N++, which equates to some intense and truly fast moments. At the end of it all, the runners were able to walk away with a new world record. 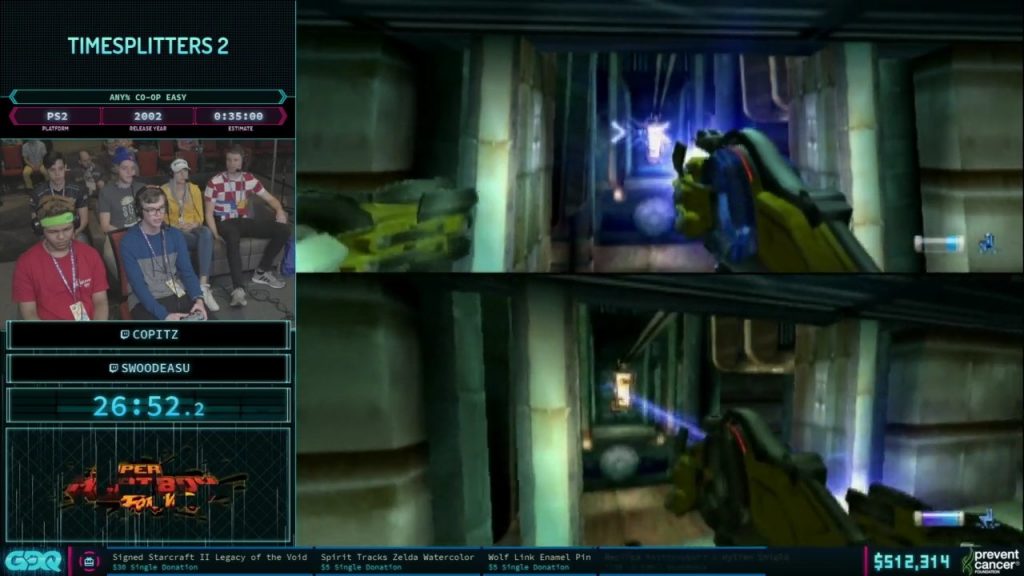 The Time Splitters franchise holds a lot of nostalgia for me, and that probably plays a part in my enjoyment of this speedrun. Runners Copitz and swoodsea performed the Co-op speedrun on Easy difficulty, making their way through the game in just over 30 minutes. Time Splitters 2 is an irreverent and wacky first person shooter, that focuses on time travel. It’s made by a team comprised of ex-Goldeneye developers, so fans of that Nintendo 64 classic will be able to spot the similarities. Generally speaking, the Time Splitters 2 speedrun is less about major glitches and more about cooperation and movement optimization. Although the commentary doesn’t give the runners enough credit, the Time Splitters 2 run is pretty hard to pull off. It’s also very fun to watch. So whether you’re a fan of Time Splitters or haven’t heard of the franchise at all, I recommend you give this speedrun a look. 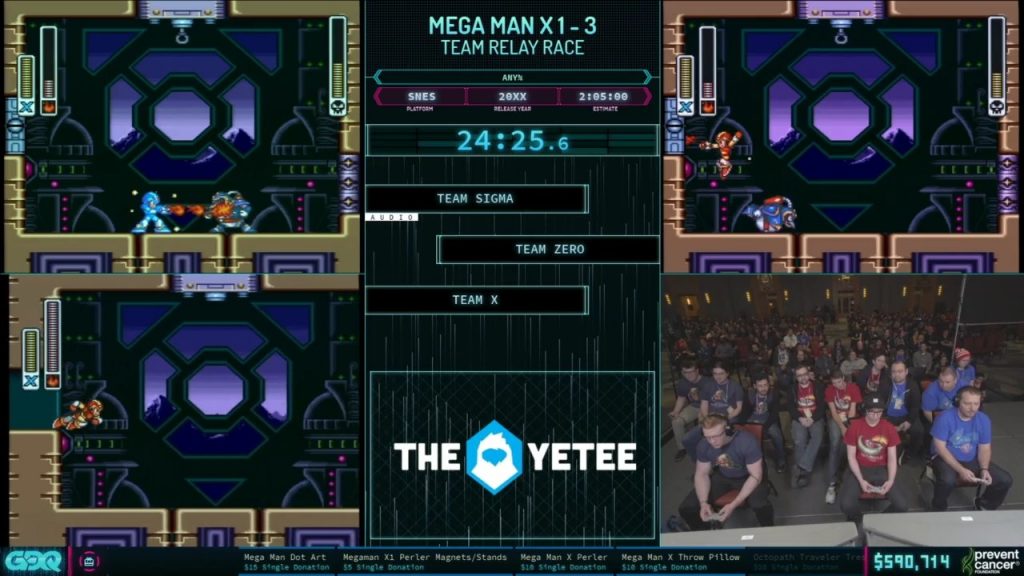 This relay race was one of my most anticipated runs of the entire event, and it lived up to expectations. Three teams stepped up to the stage; Team Sigma, Team Zero, and Team X. Comprised of three speedrunners each, the teams took on the original Mega Man X trilogy for Super Nintendo. One after the other, the runners defeated the robot masters, upgraded X, and blasted their way to the end. The end result is an excellent and intense race, and a quick viewing of the entire Mega Man X trilogy in under 2 hours. The race itself rarely had a boring moment, with several lead changes, differing routes, and a few upsetting player deaths. Each game brought failures and victories for each team, leading to a dramatic and satisfying ending. Whether you like Mega Man or not, this relay race is one worth watching.

That’s all we got for day four! We’ll be back tomorrow with our picks for day five. Until then, don’t forget to follow us on social media (@official90skid) for live coverage and reactions! Enjoy the speedruns!