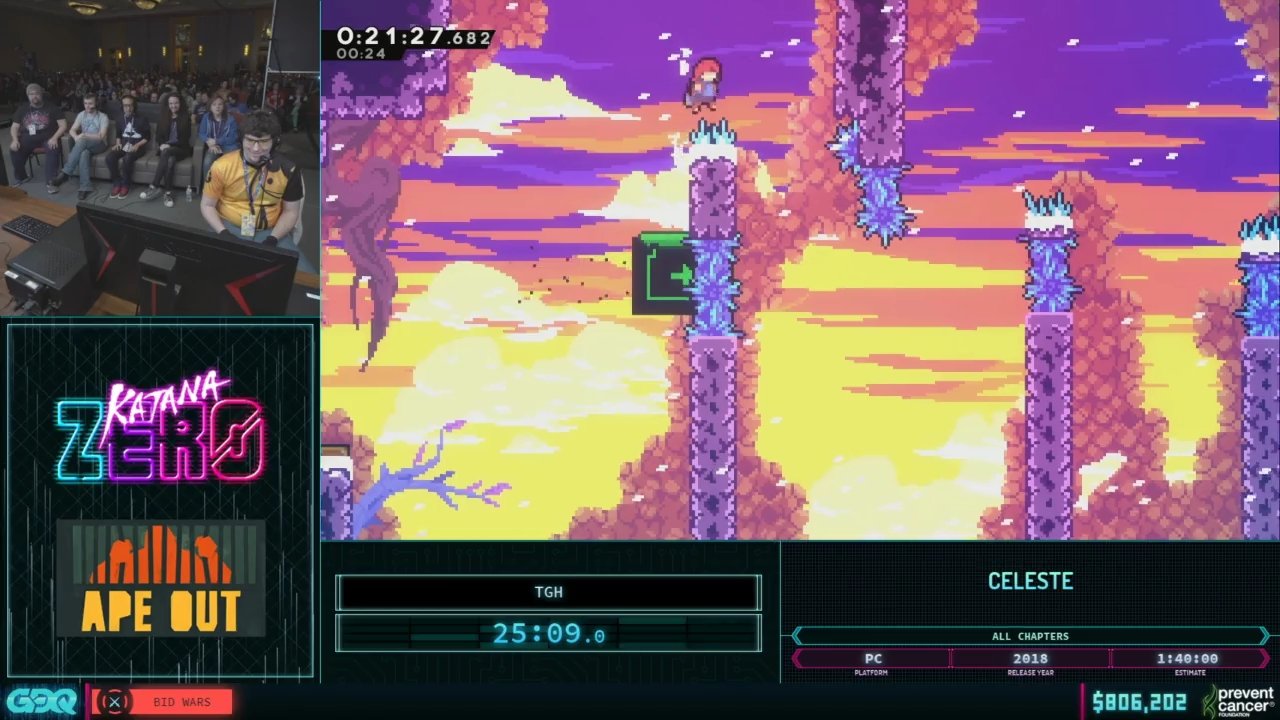 Day five of AGDQ 2019 was simply fantastic. There were speedruns aplenty, ranging from classic FPS franchises to brand new platformers. Some races shaked things up, and the much beloved “awful games done quick” block brought in tons of viewers. These speedruns were all streamed live in an effort to raise money for the Prevent Cancer Foundation. At the end of day five, the total amount raised so far sits at over $800,000. That’s a lot of donation dollars! There were tons of runs to watch, so we’re here to pick the best speedruns of AGDQ 2019 day five.

The awful games block brought us into day five, as speedrunners gathered to show off their favorite guilty pleasures. There was a wide selection of truly terrible titles, and we got to see them all smashed to pieces (figuratively, that is). After the awful block, we got a good variety of games, including Metal Gear, Lara Croft and the Guardian of Light, and some Dishonored to boot. The godfather of speedruns, DOOM, showed up to bring in the evening’s prime time. The hottest hours of day five belonged to the indie block, featuring fan favorites like Celeste, Dead Cells, and The Messenger. Day five was an all around great day, and continued the trend of a fantastic marathon.

Keep in mind that this list is just a small selection of the games that were shown on day five. For the full list, be sure to check out the official AGDQ 2019 schedule. To watch these runs (or any of the marathon), check out the GamesDoneQuick Twitch channel and VODS, as well as their Youtube channel. With that said, here are our picks for the best speedruns from AGDQ 2019 day five! 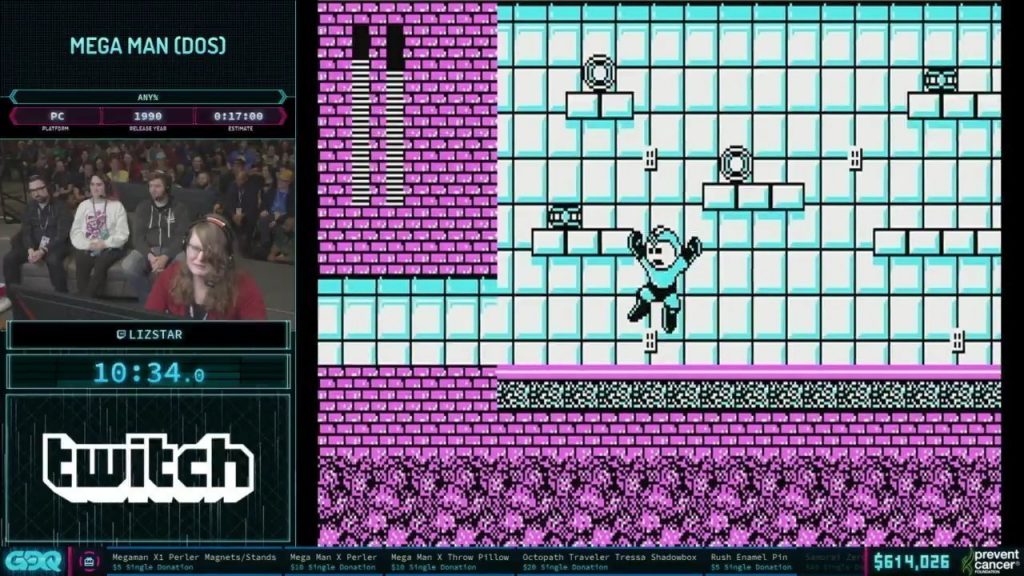 This run kicked off the awful block in an appropriate fashion, bastardizing our favorite blue robot. This version of the beloved NES classic Mega Man really makes you yearn for the original game, and a new pair of eyes. The color schemes are terrible, the weapons are laughably dull and useless, and the gameplay is nothing short of despicable. The fact that runner Lizstar can stand to play this game is a testament to endurance itself, the whole speedrun aspect is the icing on the cake.

Urban Yeti! (any%) by PeteDorr 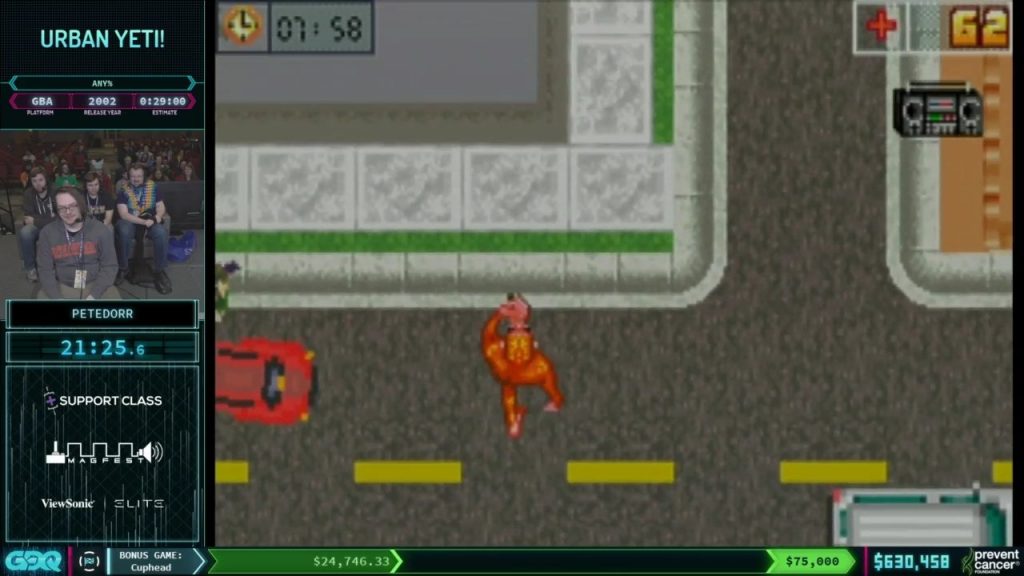 If you’ve ever played a classic Grand Theft Auto game, this top-down Game Boy Advance title might look familiar. You play as a yeti in a city, completing a series of ridiculous objectives throughout an incomprehensible plot. The comedic factor is usually high in the awful block, but PeteDorr’s run of Urban Yeti! is an absolute high point. The sheer absurdity of the concept and the gameplay make for a speedrun unlike any other. This one defies reason, and is that much more enjoyable because of it. 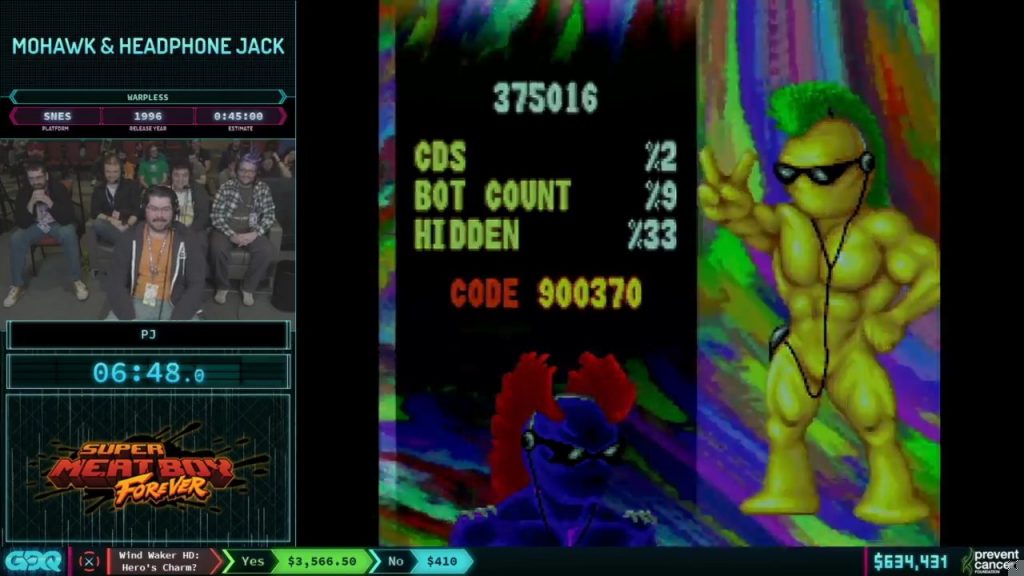 During this speedrun of Mohawk & Headphone Jack, runner PJ admitted to liking it unironically. Although it was scheduled in the awful block, this Sonic ripoff has some redeeming qualities. It’s got an interesting set of enemies to say the least, a radical attitude, and a classic feel. Unfortunately, the game takes the rotation aspect a bit too literally. As PJ plays, the screen occasionally spins with the character at a slow frame rate, producing a visual effect that is simply nauseating. Combine this with the puke green color scheme, and the experience is quite unpleasant. However, PJ’s happy demeanor and admirable skill at the game makes this a run worth checking out. 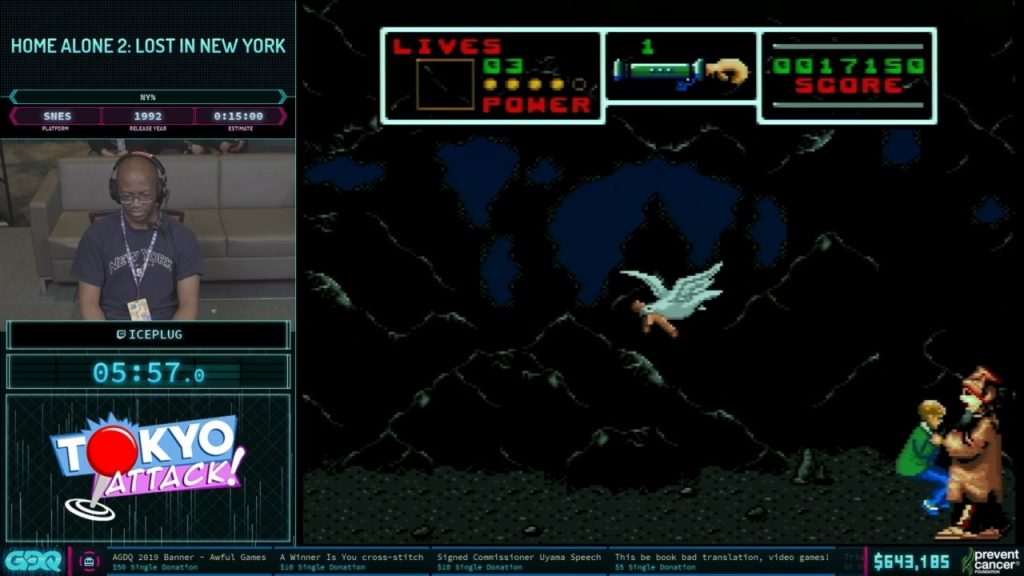 When Iceplug stepped onto the stage to perform his speedrun of Home Alone 2: Lost in New York, he did so without any companions. Although he had originally planned to have a cast of couch commentators, some unfortunate circumstances prevented that. However, Iceplug showed us that he didn’t need any extra commentary, as he gracefully guided us through this terrible movie tie-in. In this very brief run of the SNES cash grab, Iceplug provided us with cheeky jokes, musical interludes, and humorous observations. The focus was less on the speed tech and more on the entertainment factor, something that Iceplug does well. While it’s not an incredibly impressive or difficult-seeming speedrun, it sure is one of the most entertaining. 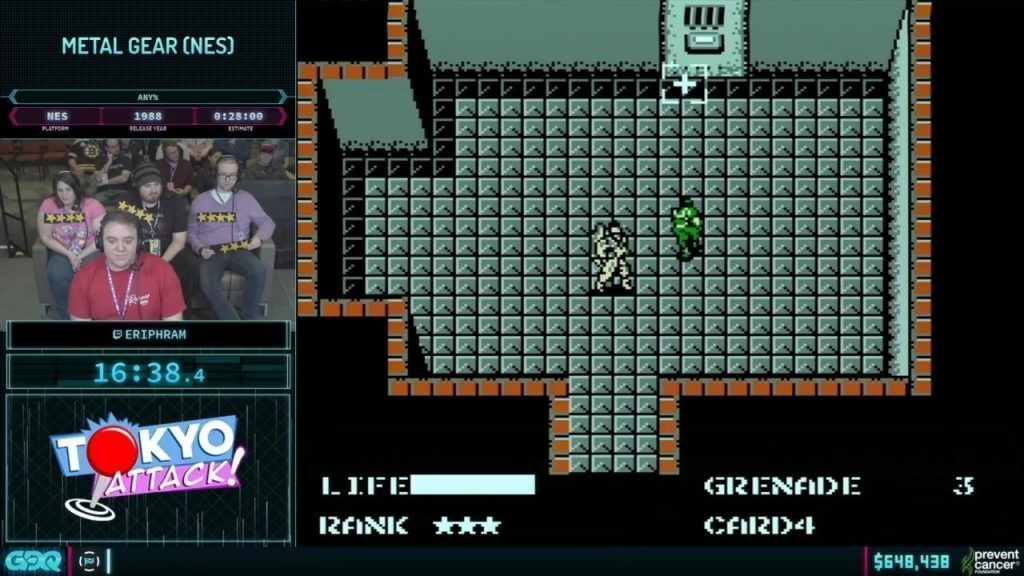 After the awful block, there was a nice mixture of games from a variety of genres. Although most of them were quite good (including the original Metal Gear run before this one), I found miniomegaking’s run of Metal Gear 2: Solid Snake to be the most interesting. Throughout the run, both miniomegaking and his couch provided excellent commentary. They explained the game’s tricks and strategies well, gave some insight on the franchise’s lore and inspirations, and mused about the creator’s original vision. For fans of the Metal Gear Solid franchise, this is a fun watch for the context alone. I was ultimately won over by the laid back demeanor of the commentators and runner. This is a solid run through and through. 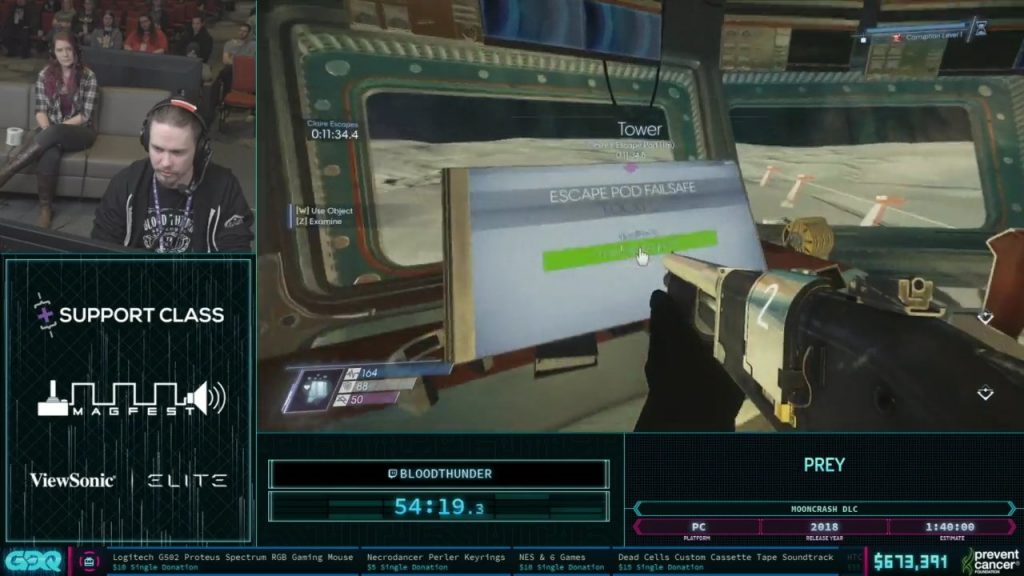 Bloodthunder is a speedrunner that I’ve watched before, and he always seems to be highly knowledgeable about any game he plays. His deep understandings of gameplay mechanics and routing were shown off in full in this run of the Mooncrash DLC from Prey. The Mooncrash DLC is complex by design; you enter into a simulation over and over, completing objectives and escaping the area. It’s a run-based first person shooter with exploration and crafting elements, mashed up with multiple playable characters and tons of objectives to complete. To call it confusing would be an understatement. With his legal pad full of notes, bloodthunder took us through this twisting and winding speedrun route with surprising clarity. With each new trick or gameplay element, he effortlessly explained things in digestible tidbits. His actual gameplay ability is phenomenal as well, but bloodthunder’s succinct and easily understandable commentary absolutely makes this run.

Ultimate DOOM (any%) by KingDime 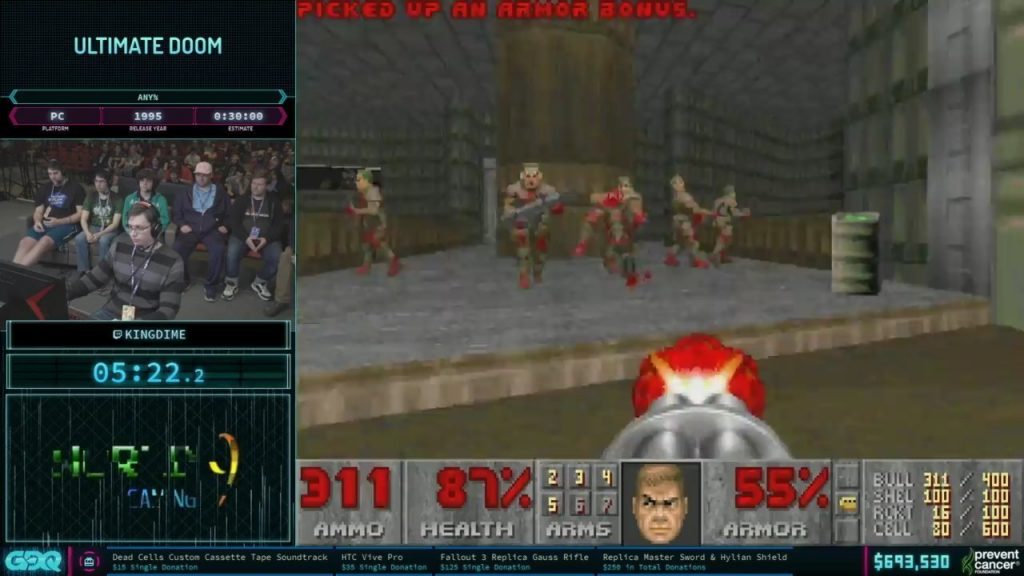 You can’t talk about the history of speedruns without bringing up DOOM. This classic first person shooter played a big role in the birth of the speedrun scene, so it’s appropriate that it got stage time at this year’s AGDQ. Runner KingDime showed us his incredible mastery of both Ultimate DOOM and DOOM 2, but I found the Ultimate DOOM run to be more exciting overall. When you watch a DOOM speedrun, you’re not going to see tons of crazy glitches or out-of-bounds clips. Instead, you get to watch a runner improvise on the fly, ripping and tearing through hordes of enemies while navigating maze-like levels. DOOM is an iconic game, and seeing it played at this level of skill and speed is a treasure. KingDime also gives detailed and interesting commentary, discussing the developers of the game and some of the history of the speedrun as well. It’s one of the fastest moving speedruns you can watch, and for a game that’s over 25 years old, remains highly competitive. 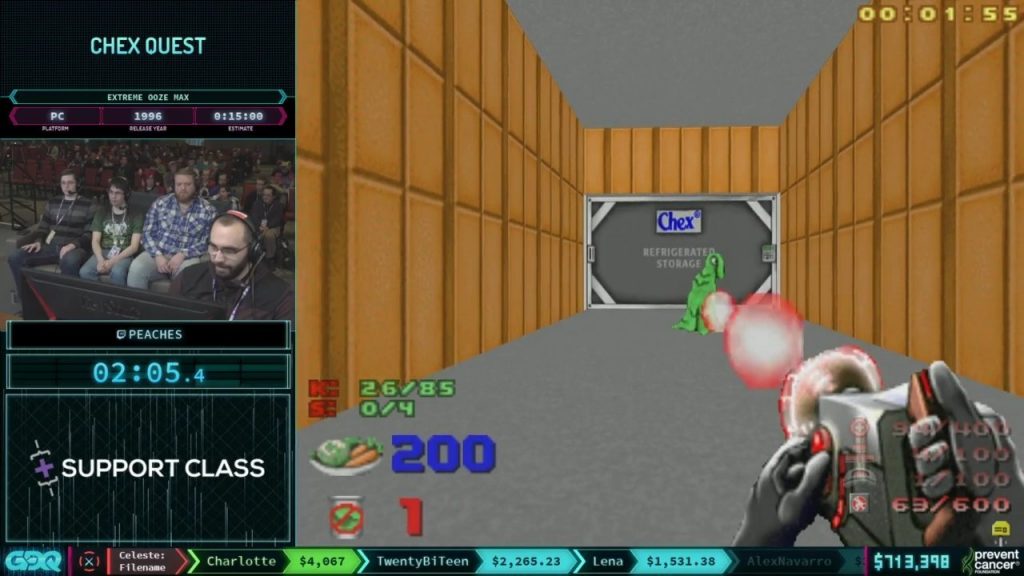 If DOOM is too violent for you, perhaps you’ll enjoy this Chex Quest speedrun by peaches. This run is worth watching simply for the weird factor alone. Chex Quest is a total conversion mod for DOOM; a game that has original graphics, music, and levels, but uses the foundation of DOOM‘s engine. Basically, it’s DOOM but with aliens and cereal branding. Runner peaches briskly makes his way through this funny and lighthearted first person shooter, reminiscing about his childhood and discussing the game’s origins. It’s a quick and amusing speedrun of a gaming industry oddity. If you like old school shooters, definitely check this run out.

Crypt of the Necrodancer: AMPLIFIED (Coda Low%) by SpootyBiscuit 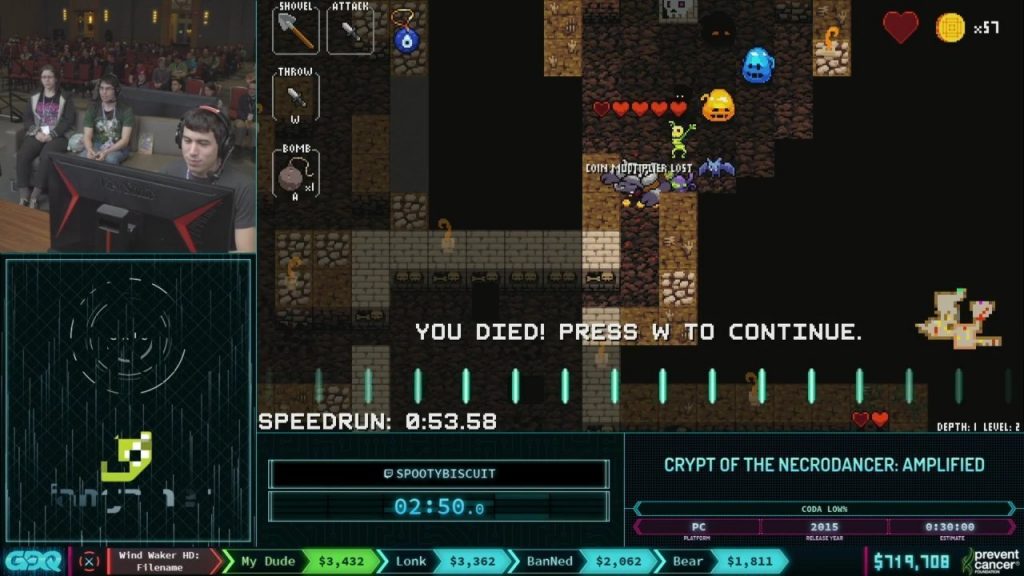 Day five was full of difficult games, but few were as difficult as this speedrun of Crypt of the Necrodancer. The game itself is complex; it’s a turn based RPG that plays from a top down perspective, and it’s also a rhythm game. The player hops around a board to the beat of the music, attacking enemies and finding new gear. After they finish a few levels, they move onto a boss. Each stage is random every time you play it, due to the game’s rogue-like nature. However, runner SpootyBiscuit made things much more difficult by playing as the character Coda.

Originally conceived by the developers to be the “impossible character”, Coda is a playable character that few players would actual want to play as. Nearly any mistake can instantly result in death, and in a rogue-like with perma-death, that’s a big concern. Runner SpootyBiscuit fought his way through technical issues and accidental deaths, tapping in time with the beat. It’s a truly impressive run, and one that demands consistent precision for 25+ minutes. Once you wrap your head around the mechanics of the game, this speedrun quickly becomes one of the most impressive of the marathon so far.

Last year at Summer Games Done Quick 2018, we got to see TheMexicanRunner blast through indie darling Cuphead. This year at AGDQ 2019, we got to watch him do it again, but this time at a higher difficulty. Competing in the “All S + P Ranks” category, TheMexicanRunner has to bring his A-game. This category required him to perform to near perfection on every boss and complete all side-scrolling levels without killing enemies. This is no small feat, but TheMexicanRunner made it look easy.

Since he was preoccupied with the difficulty of the run, commentary was handled by Blechy, one of my favorite commentators of all of GDQ. Time and time again, Blechy provides commentary that helps the audience follow the game, is informative, and adds weight to the skill of the player. This fantastic commentary complimented the excited attitude of TheMexicanRunner, resulting in quite a show. It helps that Cuphead is one of the best platforming action games in modern video games, too.

Celeste (All Chapters) by TGH 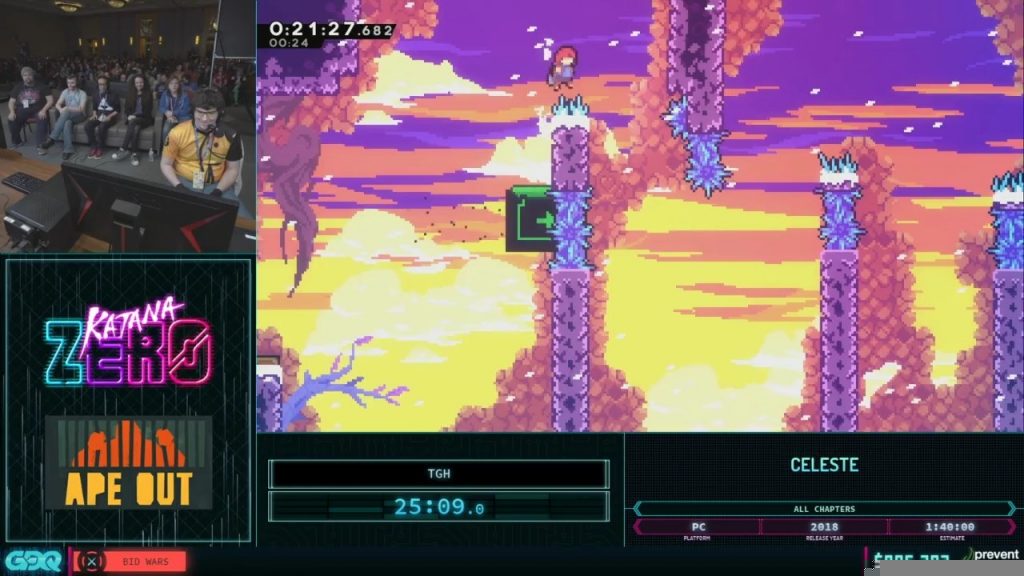 Speaking of the best platforming games in modern gaming, Celeste showed up to close out AGDQ 2019 day five. This much loved indie platformer was seen at SGDQ 2018 in the form of a race, but the AGDQ 2019 run was much longer and comprehensive. The undeniably skillful runner TGH performed a run of the “All Chapters” category, a category that covers every level in the game. This includes all the main chapters, the unlockable cassette “B-Side” levels, and the ultra-difficult “C-Side” levels. Having just finished Celeste the night before watching this speedrun, I had plenty of context on the difficulty. Not only is Celeste one of the best platformers I’ve played, it’s also one of the most difficult. I easily died over 1,000 times on my first playthrough. TGH finished every level of the game in a stunning time, and only dies a handful of times in the process.

At a certain point, watching TGH run Celeste becomes hypnotic. It’s the kind of speedrun that is entrancing to watch, with long strings of quick jumps and super precise platforming. There’s a rhythm to various dashes and jumps, as each new screen flies by at an increasingly fast pace. The beautiful music and wonderful sound effects keep you bobbing your head, and great commentary and audience participation keeps the run alive. This is easily one of the best speedruns of the entire marathon, if not the best speedrun of day five.

Those are our picks for the best speedrun from day five of AGDQ 2019! We’ll be back tomorrow with our favorite stuff from day six. Until then, be sure to follow us on social media (@official90skid) for live coverage and reactions. There’s still plenty of speedruns to watch, so be sure to check the official AGDQ 2019 schedule for a comprehensive list. Enjoy the speedruns!