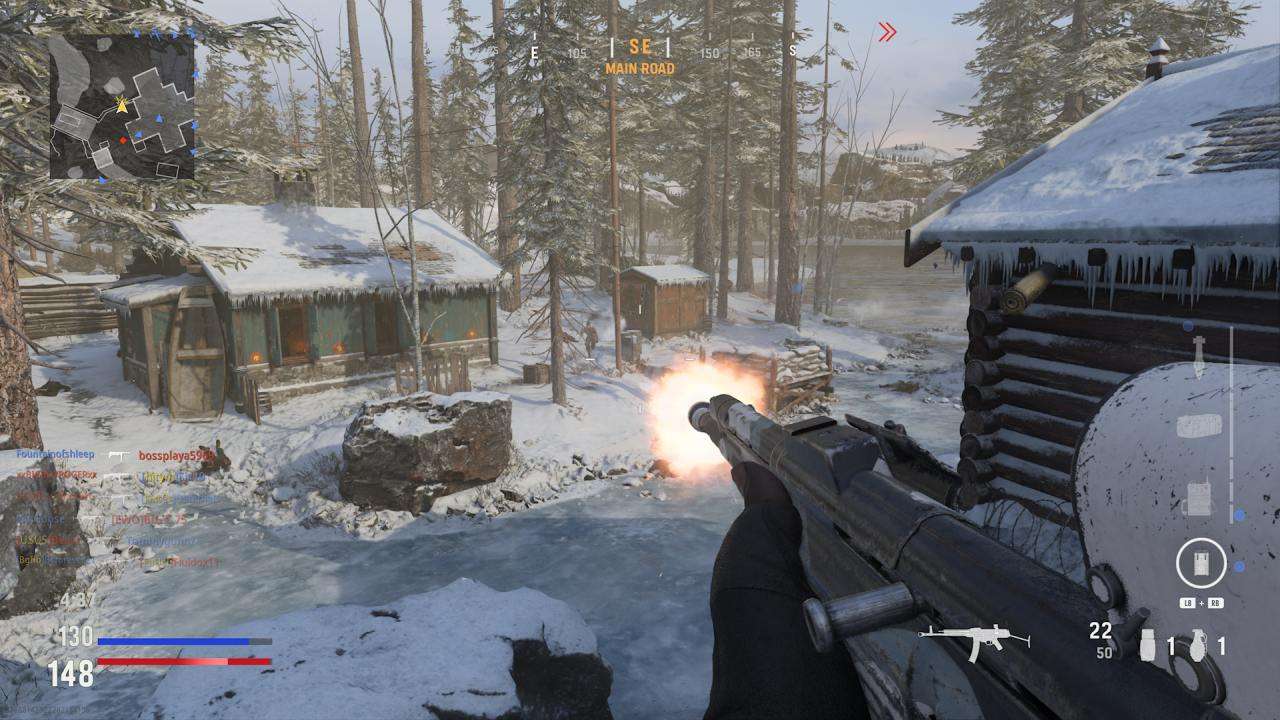 Castle was first featured in Call of Duty: World at War, where it was a standout due to its vibrant colors and non-traditional layout. Luckily, it remains a solid playground for explosive fun and one of the best multiplayer maps in Call of Duty: Vanguard. Set in Imperial Japan, this asymmetrical map immediately catches the eye with its autumn-colored trees, with leaves fluttering across the battlefield. The buildings offer both visual and tactical variety, with a handful of excellent sniping spots, choke-points to hold, and a sufficient amount of flanking positions to keep matches from stagnating. We loved seeing some of the remade maps from World at War included in Vanguard, and Castle is definitely one of our favorites of the entire batch.

Das Haus is extremely small and exceptionally chaotic. It’s the kind of map you play when you don’t want to think or strategize, but simply pull the trigger and let off some steam. As a ramshackle training ground in Germany that resembles the West Wing of the United States White House, Das Haus offers tons of tight corridors, kill-boxes, and spawn traps. You never know if it’s smarter to run or to camp, as enemies have a chance of coming in from every direction. Das Haus is easily one of the most exhilarating maps in Vanguard, perfect for a quick match with Blitz pacing. Although it doesn’t offer the most dynamic battles, Das Haus will surely go down as a fan favorite and be fondly remembered as one of the best multiplayer maps in Call of Duty: Vanguard.

If there’s one issue with most of Vanguard‘s multiplayer maps, it’s their lack of symmetry or excessive choke-points. While not the most visually engaging map, Eagle’s Nest offers some of the most engaging gameplay flow, with three distinct lanes of attack for either team. Battling it out in a safe house nestled in the mountains, you have the option of taking the fight indoors or sneaking around either side of the building, with most firefights erupting in the middle. Like on Das Haus, matches on Eagle’s Nest can often be pretty scrappy, but it’s simplistic design makes it wonderful to navigate. Whether it’s a deathmatch-based mode or objective, Eagle’s Nest is a well-balanced map and one of the most enjoyable on offer.

When you back at the best Call of Duty maps of all time, training grounds set in fake towns have a solid streak of quality. Look no further than longtime favorites “Firing Range” and “Nuketown”, two exemplary maps that offer fast-paced fights in familiar areas. Thankfully, Call of Duty: Vanguard has its very own faux fight zone, Decoy, a facade of a small English town. The unorthodox layout of Decoy provides a unique flow for each match, with tons of doors to open, destructible fences to peek from, and more. While there are a few too many camping spots for our liking, the map rewards players who like to hunt down enemies, constantly checking corners and moving with precision. While it might not be as timeless as Nuketown, Decoy is still one of the best multiplayer maps in Call of Duty: Vanguard.

Set on the roof of a luxurious hotel during a massive battle in Paris, France, Hotel Royal provides the benefits of a three-lane layout similar to Eagle’s Nest while injecting a bit of the madness found on maps like Das Haus. In addition to flanking on the outer edges of the map or running straight into the fight inside, players can use the rooftop to gain a vertical advantage, raining bullets or grenades from above. For those who enjoy SMGs and shotguns, Hotel Royal is also a dream, with tight corners and small rooms that promote close-quarters combat. While it’s not unusual to catch a stray bullet and die in frustration, fighting on Hotel Royal is intense and entertaining, earning it a spot on our list of the best Call of Duty: Vanguard multiplayer maps.