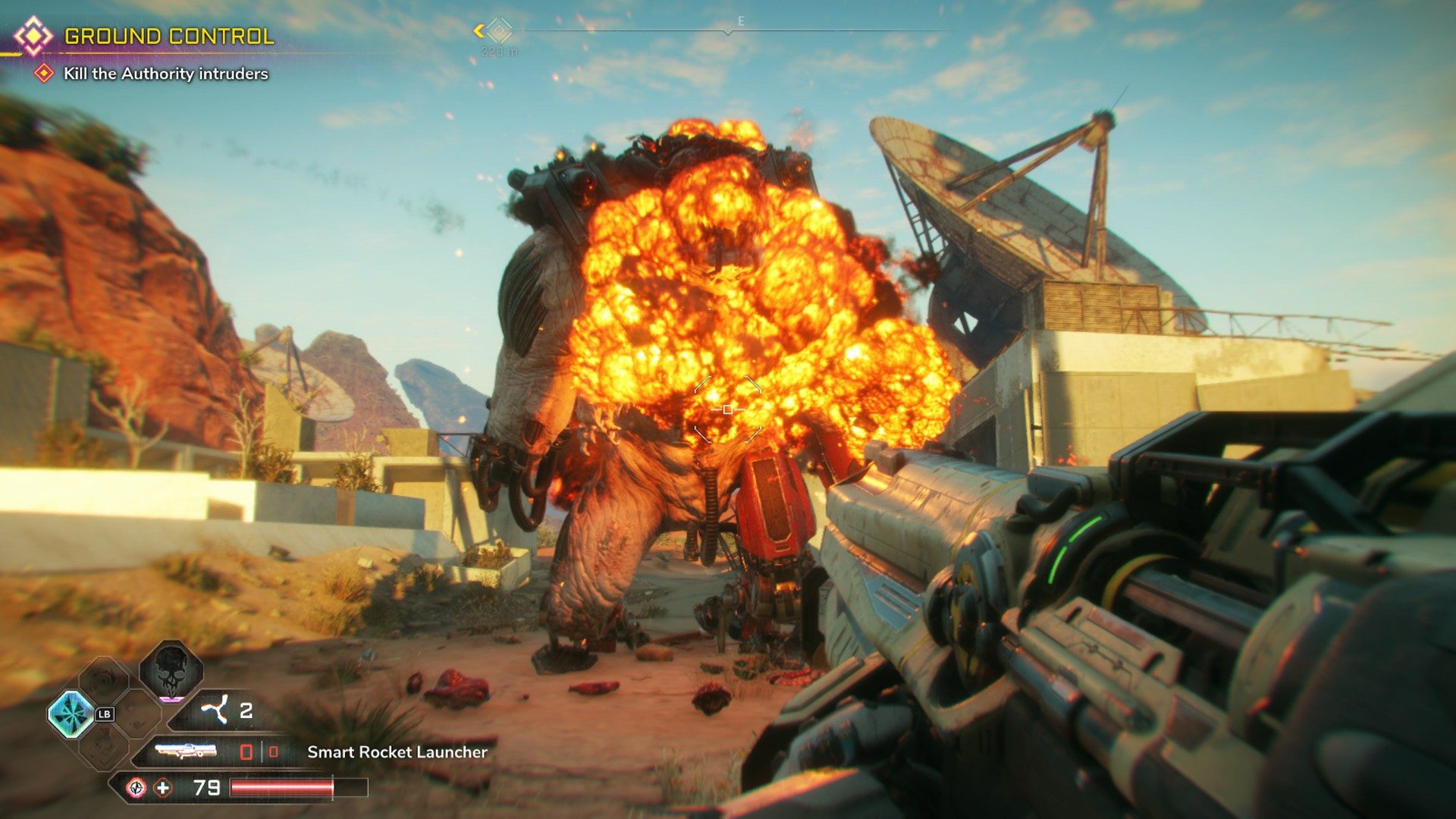 Rage 2 is the sequel to the oft forgotten first-person shooter by id Software, originally released on the Xbox 360 and PlayStation 3 in 2011. Taking place on a desolate Earth affected by an asteroid collision, various bandit and outlaw factions fight for survival. Mutants, marauders, and all manner of miscreants rule the ruined valleys and fields, and it’s your job to fight back against them. Whereas the original Rage was visually mediocre but competent shooter, Rage 2 looks to amp up both the visual spectacle and gunplay to a much higher level. Is Rage 2 an adrenaline-pumping first person shooter, or a confusing sequel with repetitive gameplay?

Rage 2 continues the story of the original Rage, set in the near future on a post-apocalyptic Earth. You play as the either male or female soldier named Walker. During an attack on their home camp of Vineland, Walker obtains a powerful suit from a fallen Ranger. Thanks to the nano-tech infused in their blood, Rangers are able to harbor super-human powers. With assault rifle in hand and the powerful Ranger suit, Walker vows to take down the tyrannical antagonist General Cross and his army known as the Authority.

In order to do so, Walker begins work on Project Dagger. A contingency plan of sorts, Project Dagger requires Walker to seek the help of three other specialists spread across the map. There’s Marshall, the grizzled mayor of the long-standing trade town named Gunbarrel. Another mayor, Loosum Hagar of the neon-lit town of Wellspring, also must be enlisted to succeed. Finally, you’ll have to find the mad scientist Dr. Kvasir, hidden away in the dank swamplands. Each member of the Dagger Project has a slew of objectives they need completed, and as usual, it’s up to our hero to help them out. Your adventures will send you back and forth across the Wasteland, on a colorful if predictable journey.

Overall, the plot in Rage 2 is very straightforward and reminiscent of 1980’s action films. Walker is a decent character, but lacks any conviction or standout personality traits. Likewise, General Cross is a by-the-numbers villain, with plenty of cybernetic enhancements and grizzly-voiced threats to go around. The supporting cast is full of zany characters, and everyone is just a tiny bit insane. There’s a bit of dark humor to everything, and it results in a cheeky and flippant tone. Rage 2 isn’t exactly concerned with telling a mind-bendingly good narrative. Instead, it delivers a passable if cliche and repetitive story. It’s not a bad story, but simply one that we have seen time and time again. The authored content is also very brief (but more on that later), resulting in a story that wraps up almost as quickly as it begins.

Using your own personal scrap car named the Phoenix, you’ll explore the extensive Wasteland looking for foes to kill and locations to loot. Rage 2 contains a vast open world to explore, packed with missions, activities, and collectibles. The main story sets you on a decent path for exploring things as you go, introducing you to various trade towns where you can pick up missions and replenish supplies. The citizens in these trade towns are helpful for pointing out locations on your map and informing you about hidden caches and collectibles. Generally speaking, the major trade towns are bustling with life and character. From a pair of scantily clad men playing “slap ass” on the sidewalk to local fashion police, Rage 2 presents a world of wacky and dark humor through its various NPCs and townsfolk.

As with most features in the game, you can upgrade your transportation by spending precious resources. In the “Vehicles” menu tab, you’ll find several perks to unlock that make exploring the Wasteland quicker and more safe. You can deck out your Phoenix with new weapons, increase its durability, and even buy yourself an ejector seat. In addition to the Phoenix, there are over a dozen other vehicles you can discover in the Wasteland. By commandeering these vehicles and returning them to trade towns, you can unlock them for personal use. I mostly stuck with the Phoenix as my go-to ride, but the variety of the additional vehicles made most worth driving around once or twice.

The gunplay in Rage 2 is appropriately fast and frenetic. Using a handful of weapons and a mixture of super-powered attacks, you’ll blaze your way through the countless enemies in the Wasteland. Neon-haired bandits known as the Goon Squad are just as prevalent as the mutated freaks that infest the ruined Earth. Luckily, you have a decent selection of weapons at your disposal. The shooting feels standard and competent, even if the controller-based aiming can take a bit of getting used to. Many guns have alternate firing modes and can be upgraded as you progress. Combat in Rage 2 is all about mayhem, whether it’s the damage and color-boosting “overdrive” ability or one of your devastating Ranger abilities, the result is always bloodshed.

Combat is also quick, with movement and dexterity being another big piece of the puzzle. Besides loading yourself up with craftable grenades, turret drones, and bladed boomerangs known as wingsticks, you can do a lot of damage by quickly traversing the battlefield. A lot of the early Ranger abilities ensure that you’ll be flying around environments by letting you do mid-air dashes and double jumps. Survival is also heavily dependent on your ability to move quickly through enemies. Like in DOOM (2016), slain enemies drop health and valuable resources, but they are only available for a short time. Since there’s only a bit of regenerating health, you’ll want to quickly jump from kill to kill, sucking up health boosters and upgrade materials.

Choose Your Own Apocalypse

Although the Wasteland map offers countless locations to explore and side activities to take on, Rage 2 isn’t an extremely long game. If you’re looking to complete the main story, you’ll only have to complete a handful of missions for each of the three specialist characters. In order to unlock these missions, you must complete various activities marked on the map, color coded to each character. That said, you only need to complete a small number of activities before finishing the game, leaving most of the content optional.

In this way, you are the ultimate decision maker when it concerns how you’ll spend your time in Rage 2. If you don’t like the racing content, you can avoid it altogether, except for story-specific missions. You can choose to spend a lot of time participating in Mutant Bash TV, a deadly gameshow that provides wave-based combat challenges. Regardless of what you choose to do, it usually has some benefit towards your overall progression. You might feel like your ignoring the main story in favor for side missions, but in actuality, there is far more optional content than anything else. This results in Rage 2 feeling like a grab-bag of enjoyable content, but one that lacks a certain focus. It makes the game great for quick play sessions, but that means less bombastic story missions and more enemy outposts to clear.

Upgrading your character, Ranger abilities, and weapons is a constant throughline in Rage 2. Before upgrading most of your gear, you’ll have to amass a stock of feltrite; blue shards that are dropped by enemies and found in the environment. As you complete activities and discover rare Ark chests around the map, you’ll earn a variety of upgrade materials to strengthen your gear and powers. Nearly everything can be upgraded by unlocking various perks, and you access those perks by spending feltrite. Whether you’re upgrading your gun or strengthening your Ranger abilities, you’ll need feltrite first. The main exception are the major “projects”, which are initially unlocked by progressing through missions. The numerous upgrade materials can seem overwhelming and hard-to-track at first, but you’ll find things less complicated than they seem.

You can discover new powers and weapons by uncovering remaining Ark facilities and searching inside. Here, you’ll be injected with more “Nanotrites”, unlocking new abilities for your Ranger suit. These range from armor-shredding blast wave attacks to the classic double jump. All of these abilities can be further upgraded by unlocking various perks with Nanotrite Boosters, another valuable resource found in chests.

The Wasteland can often look very bleak, especially in the opening areas of the game. The land is burned out and destroyed, and the occasional “eco-pods” meant to reintroduce vegetation to the area have been ineffective. Despite the gray and muddy look of the landscape, Rage 2 is one of the most colorful first person shooters in recent memory. Like in Far Cry New Dawn, the bandits and their vehicles have been heavily decked out with neon colors.

In fact, this is one of the defining features of the deadly Goon Squad, the pop-punk enemies you decimate during your stay in the Wasteland. Its like a proverbial vomit of blues, pinks, purples, and greens have been thrown wildly against the setting, in the form of graffiti, face-paint, and base decorations. The color is only further amped up during times of combat, with blooms of explosions and sprays of gore add an additional color palette of red. When you add on the “psychedelic” visual filter that results from using your Overdrive ability, Rage 2 can be overwhelmingly colorful.

This fits with the chaotic nature of the gameplay and story, and the visual style is backed up in menus and in-game maps. I enjoyed the exceptionally bright and vibrant visuals, even when they made some of the action hard to track. Much like the shooting and movement, the visuals in Rage 2 are quick and in-your-face, erupting with intensity.

The Bottom Line on Rage 2

Like the first game, Rage 2 presents an interesting world with plenty of content, but it lacks a compelling reason to explore it all. The combat is tight and chaotic, the visuals are vibrant and fun, and there are plenty of upgrades to unlock and resources to grind. However, the plot is paper-thin, and despite some memorable characters, the overall narrative is ineffective.

The amount of enjoyment you get out of Rage 2 entirely depends on what your expectations are. If you simply want to blast waves of enemies while increasing your power, Rage 2 is a colorful and satisfying experience in that regard. If you’re looking for an interesting story or an immersive world, you might be a bit disappointed. That said, the game is fun to play and joyfully hectic, something that I appreciate in the first-person shooter genre. It might not be the most refined or challenging game, but Rage 2 is an enjoyable shooter with lots of content for those who enjoy it.