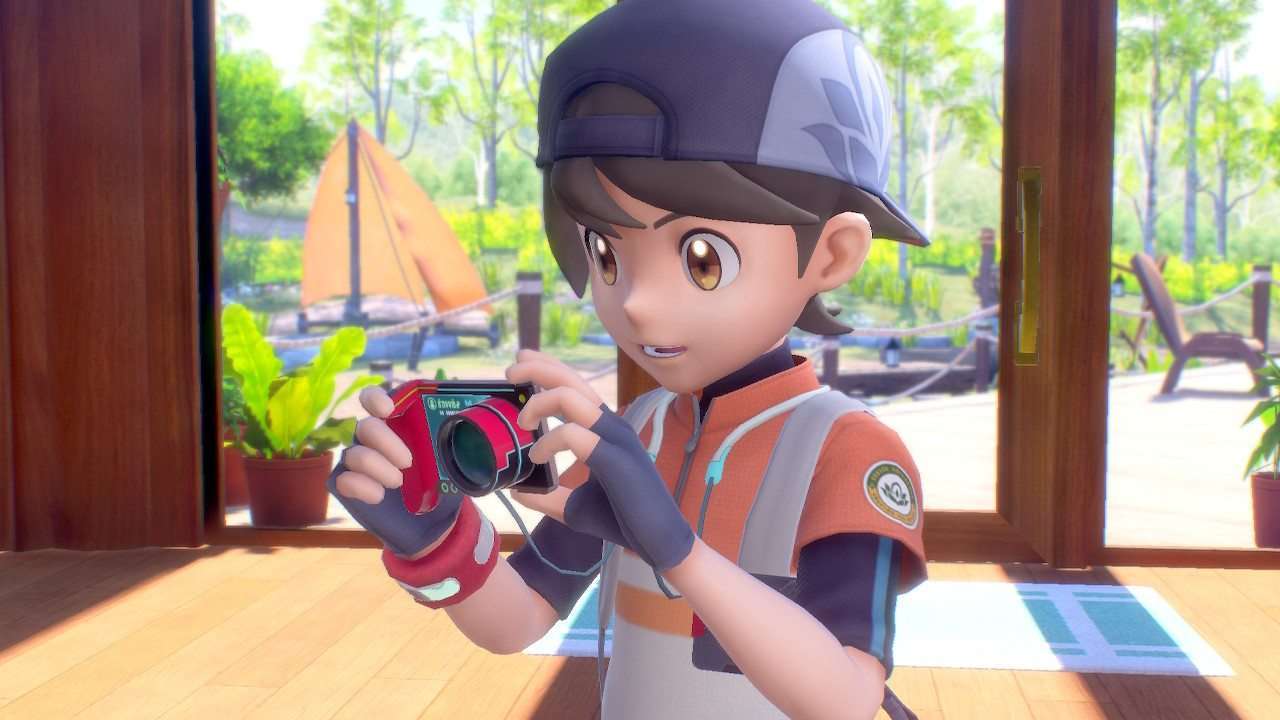 New Pokemon Snap is a sequel to the cult-classic photography simulator, Pokemon Snap, which charmed many Nintendo 64 owners when it was released in 1999. This new title on the Nintendo Switch was developed by Bandai Namco Studios, following their excellent work on Super Smash Bros Ultimate. Like the original game, New Pokemon Snap puts you in the shoes of a rookie cameraman in a lush and tropical environment, and encourages you to snap photos of exotic and often adorable Pokemon. Played from a first-person perspective, you’ll enjoy breezy on-rails rides through the fantastical Lental island region. While New Pokemon Snap offers plenty of modern improvements, the moment-to-moment gameplay is strikingly similar to the N64 original. Does New Pokemon Snap succeed at bringing the joys of Pokemon photography to a new audience on the Switch, or is this an outdated concept with a new coat of paint? Let’s see if this new Pokemon spin-off is a worthwhile vacation or a repetitive slog.

The Illumina Mystery of the Lental Region

New Pokemon Snap introduces us to the brand new Lental region, a beautiful archipelago with islands ranging from lush forests to fiery volcanoes. You experience these colorful spots of nature as a new recruit at the Laboratory of Ecology and Natural Sciences (LENS for short), where it’s your job to snap photos of the native Pokemon in their natural habitat. The LENS is run by the bespectacled Professor Mirror and his jubilant assistant Rita, who are investigating recent sightings of a rare Pokemon phenomenon known as Illumina. Riding in the NEO-ONE, a futuristic pod that effortlessly floats through the Lental wilds, you’ll simply sit back and start snapping.

The adventure to uncover the secret of the Illumina mystery takes you through 10+ areas, spread across a variety of biomes. You’ll snap shots near base camp, explore a vast jungle, ride along a coral reef, and much more. Stages can be played during the day and at night, with both offering different Pokemon and changes in the level layout. You’ll meet a few characters during your adventure, including a rival newbie photographer named Phil, as well as some returning familiar faces.

There isn’t a ton of depth to the story in New Pokemon Snap, mostly serving as a way to guide players through new and interesting environments. Like other spin-offs in the Pokemon franchise, it’s a bubbly, positive, and overall happy-go-lucky quest. The main story arc is a bit anti-climactic in the end, but is pretty standard fare for a Pokemon outing. In terms of its narrative, New Pokemon Snap is the embodiment of the phrase “it’s not about the destination, but the journey”.

There are over 200 Pokemon to catch on film, each with four special shots to collect based on their unique behaviors. If you want to have a complete Photodex and “snap them all” so to speak, you’ll need to figure out ways to get the Pokemon to act out. Luckily, there are a variety of ways you can influence or affect them as you stroll by, such as tossing a tasty fruit, scanning them with your advanced LENS-tech, and more. It’s impossible to see and snap every photo on one trip, as New Pokemon Snap is designed with heavy replayability in mind. You’ll often revisit previous locations after unlocking a new gadget or upgrade, seeing how Pokemon react to your newfound abilities.

Leisurely rolling through the wilds of the Lental region and taking pictures is relaxing, charming, and if you’ve played the Nintendo 64 original, incredibly nostalgic. There were plenty of moments where I would chuckle at a cute Pokemon pose, gasp at the sight of a rare Pokemon, or cheer in joy after snapping a particularly precise photo. Even with such a simple gameplay structure and a comfortably slow pace, New Pokemon Snap proves that the original concept is still fun, even 20 years later. Taking the plunge into a new area for the first time provides a rewarding sense of discovery, feeling like a fantastical safari where the action unfolds specifically for you to behold.

That said, replaying a stage in any video game, no matter how fun, gets repetitive after a while. In an effort to avoid this tedium from setting in, stages in New Pokemon Snap have a “research level”, which raises as you make discoveries and snap photos. Every time you increase a stage’s research level, new Pokemon will appear on the path, different interactions and events will take place, and tons of fresh photo opportunities will appear. You can revisit stages and set their research level before entering, so there’s no need to worry about missing a specific shot. Unfortunately, this doesn’t stop New Pokemon Snap from feeling a bit padded out, especially toward the middle of the game. While the experience is fulfilling and enjoyable nonetheless, it can feel grindy at times, halting your adventure as you are forced to replay stages to unlock new ones.

After your laidback rides through the untamed edges of the Lental region, Professor Mirror eagerly awaits you back at the LENS facility to judge your photos. When you arrive back from a stage, you can submit one photo of each Pokemon to the Professor to be rated and reviewed. Your photo is judged on a variety of metrics, including the Pokemon’s pose, size, placement in the frame, and more. Photos are then assigned a score based on these individual ratings, resulting in either a bronze, silver, gold, or diamond reward. Photos are also categorized into a four-star system, which represents the rarity of the shot.

Overall, the general photo rating process feels more lenient and enjoyable than in the original Pokemon Snap. Professor Mirror is a far more forgiving researcher than the N64 version’s Professor Oak, as he’ll accept most photos with no issue. Unless a Pokemon is severely out of frame or completely obscured by pieces of the environment, your shot will count.

While the more relaxed rating system is appreciated, the one-photo-per-Pokemon rule is not. If you take four amazing photos of a Pokemon with the hope of filling out your Photodex in one go, Professor Mirror won’t care. No matter how many awesome pictures of Bidoof you take, you can only submit one photo per run. You can still save any photo to your personal album for safekeeping, but they won’t count toward your research level score. This means you’ll likely have to re-take rare photos, or at the very least, replay a level four times to obtain all four unique shots. The limitation seems to only serve the length of New Pokemon Snap‘s experience, further padding your play-time in an unneeded way.

As mentioned before, discovering how and when to get a rare shot of a Pokemon is a puzzle within itself, as you must slowly learn the layouts of each stage and the potential opportunities for the desired Pokemon to appear. Luckily, there’s a “photo request” page, where characters request specific photos and give you hints on how to obtain them. This acts as both a hint and side-quest system at the same time, so if you find yourself stumped, it’s often beneficial to read through the requests.

Unfortunately, the system can feel a bit buggy at times, with some photos requiring incredibly precise angles or timing. Sometimes, you’ll take a perfectly composed picture and it just won’t cut it. This can be super frustrating, especially as you attempt to take on more complex, multi-step photo opportunities. For example, an early photo request tasked me with snapping a shot of a Taillow Pokemon in mid-flight. After taking approximately 30 pictures of exactly that, I gave up when none of them made the cut.

While the photo request system is handy for getting clues about what areas to investigate further, it might be a bit of a pain for completionists. There are over 150 photo requests to accept and deliver, but I only had the patience to submit a few dozen before calling it quits. In concept, the photo request system is smart, helpful, and a good way to guide players without feeling overbearing. However, it falters in its execution, often inciting annoyance with its stringent shot requirements.

If you’re especially proud of a photo, you can edit it and post it online through New Pokemon Snap‘s community photo-sharing mode. Here, you can tweak photos with various filters, stickers, and frames, then post them to your personal page. You unlock new cosmetic items to use in photo-editing as you complete stages and fill photo requests, ensuring there’s always something new to include in your shots.

You can also check out other trending photos and show your approval by giving out Sweet medals. Like other social media approval points, Sweet medals don’t do much, but it’s a nice way to award particularly cool-looking pictures.

In addition to sharing photos online, you can also see how you stack against other players via the ranking leaderboards. These simple but enjoyable features help flesh out New Pokemon Snap‘s creative side, letting you razzle and dazzle favorite snaps.

New Pokemon Snap takes the established formula from the Nintendo 64 classic and does it justice. While there are plenty of new Pokemon to see, presented with vivid and vibrant modern visuals, the charm of the experience is more of the same. That’s not a bad thing though, as New Pokemon Snap is a breezy and enjoyable vacation, great for newcomers and fans of the original. Like its predecessor, New Pokemon Snap isn’t a perfect game, but it’s got more than enough charm to put a smile on your face.

At its worst, New Pokemon Snap can feel a bit shallow and repetitive, with a pesky side-quest system that feels far too precise. However, moments of annoyance and frustration are overshadowed by the persistently joyful tone and moments of discovery. Like floating down a lazy river, New Pokemon Snap is best enjoyed at a leisurely pace, without worrying too much about your research points and progression. Sometimes the game’s ideas clash with this fact, but that doesn’t stop it from being a successful sequel with lots of heart.