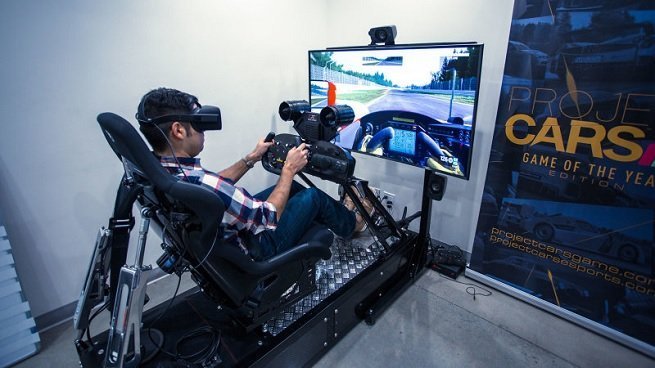 A new video game console is in the works. “Mad Box” is the current name for a new VR-focused console coming from Slightly Mad Studios, the developers behind Project Cars. If that sounds strange to you that’s because, well, this is all a bit strange. Mad Studios founder and CEO Ian Bell announced the new VR console, which is still in its early stages of design, through his Twitter account.

What is the Mad Box? It's the most powerful console ever built… It's literally 'Mad'… You want 4k, you want VR at 60FPS? You want a full engine for free to develop your games on it? You have it.

Just to clarify, the Mad Box is going to be targeting a 120 fps frame-rate. The 60 fps mentioned in Bell’s tweet was a mistake. The Mad Box console will reportedly support most VR headsets, including the popular headsets that launch in the next year or two. For now, this pretty much means that we’re talking about a consolidated box to plug your HTC Vive or Oculus Rift into.

Bell offered a few more details in an email to Variety. “It will support most major VR headsets and those upcoming and the specs will be equivalent to a very fast PC 2 years from now,” he said. “We’re in early talks with manufacturers of components so we can’t say much more right now other than we have the designs specced out in detail.”

So there’s no manufacturing deal set in stone, and at the moment, all we have are product design outlines. This thing is still very likely a few years away, so don’t get too excited. We’re also assuming that this will be a fairly pricey bit of tech. Running games in virtual reality takes a lot of horsepower, and building even a medium-spec PC capable of VR gaming can cost upward of $600.

As soon as we get more details we’ll update you straight away.