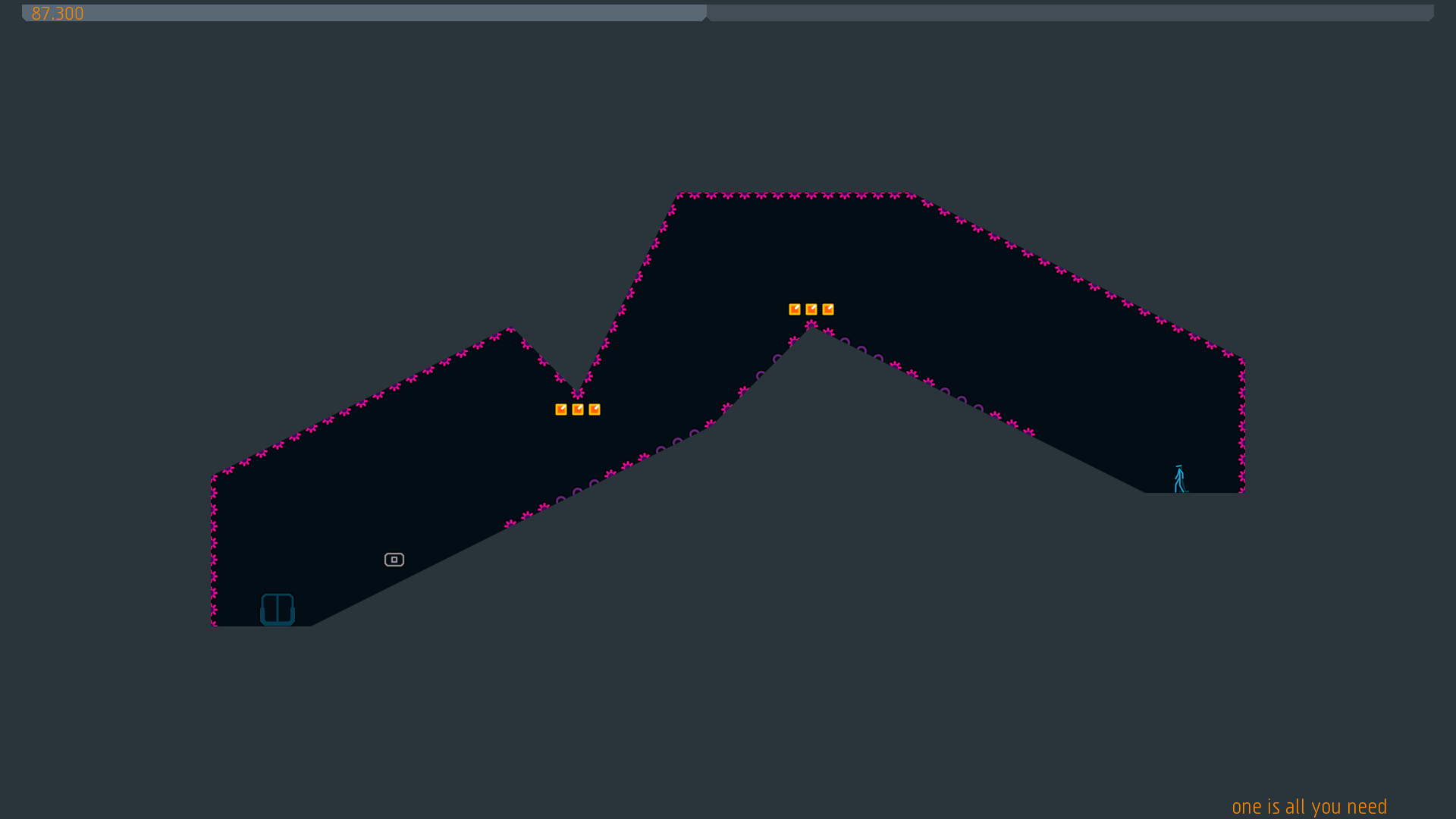 Developer Metanet Software has been making games in the N series for quite some time.  The series has a long history, spanning almost every gaming platform available.  N++ is the newest entry in that series, just now releasing on Xbox One.  Available on PC and Playstation 4 for some time now, Metanet’s ninja platformer finally sees release on the Microsoft console.  It’s the most content-filled N game to date, with over 4,000 curated levels to play and endless user creations beyond that.  Addictive and easy to learn, N has remained a great series since the beginning, never wavering.  Does N++ continue that tradition? 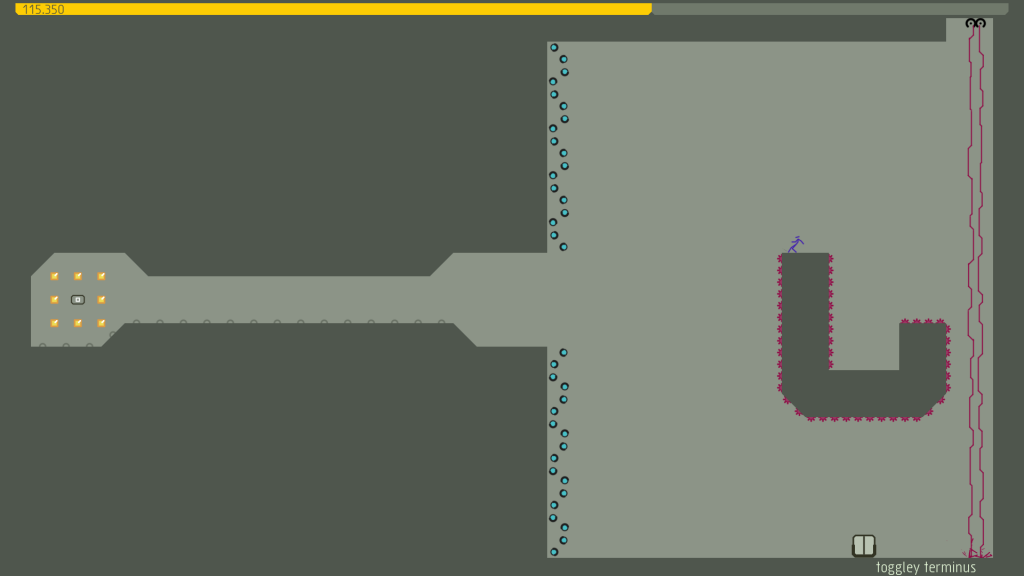 N++, like most other N games, has virtually no story.  You play as a ninja who loves gold.  Fueled by this need for the shiny stuff, you plunder trap filled rooms, clearing the obstacles within and reaching the exit door.  There’s no other motivation besides that, and that’s okay.  N++ doesn’t try to act like a narrative experience, in fact, it’s self referential and entirely aware.  The point of the game is playing a bunch of fun levels, hopping around and dodging obstacles.  It doesn’t try to be more complex than that, and is better for it.

N++ can be pretty difficult, so it helps that the mechanics are so basic.  As far as actual abilities go, the ninja has none.  You can run around and jump, but that’s it.  There’s no attacks or dodges to be found, just good ol’ fashion 2D platforming.  Instead, N++ finds its complexity within the physics of the game.  Controlling the ninja feels quite unique, and knowing how momentum affects your movement is critical as stages progress.  However, N++ does a wonderful job intuitively teaching you the rules of its system through a series of intro stages.  Each mode has a set of levels designed to organically get you acquainted.  These feel great, and are an excellent way of introducing new players to the unique feel. 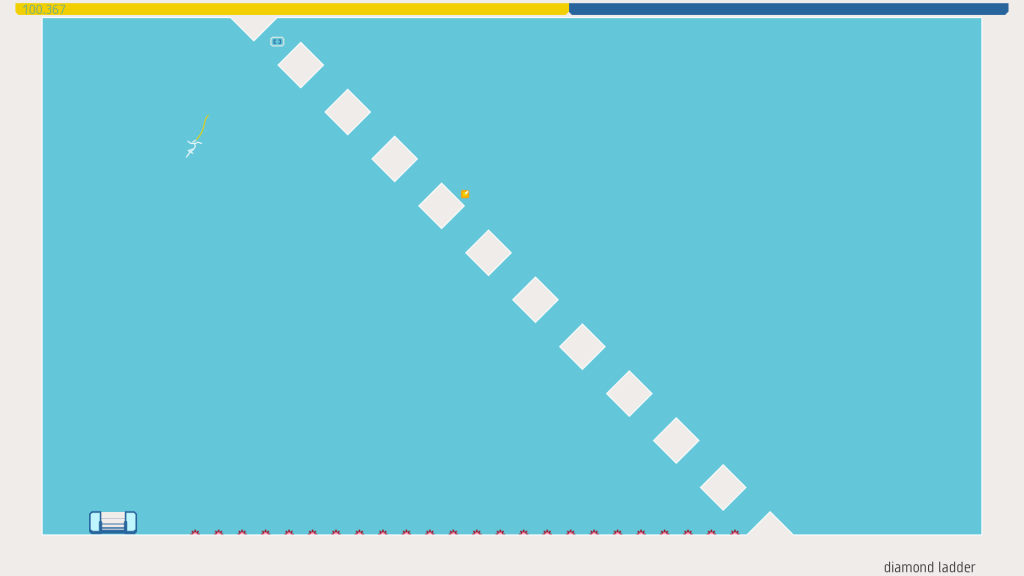 What N++ lacks in gameplay variety, it makes up for in content.  Someone once said, “too much of a good thing is a bad thing.”  I can agree with that idea, but not when it concerns N++.  Every level of the game feels great to play and there’s a consistent feeling of “just one more level”!  Thankfully, there’s tons of levels to choose from, set across a variety of modes.  Each mode has hundreds of levels, broken up into different categories.  There are introductory levels for new players, legacy content that contains great levels from the N series, and a healthy amount of brand new stages.

Whether you’re feeling competitive, cooperative, or want to play solo, N++ has you covered.  There’s a good collection of modes, suited to fit your play.  In addition to single player and cooperative modes, there’s also a Race mode, where you race another player across the same level.  Since each set of levels is unique, you won’t see any repeats, ensuring a consistently fresh experience.  Each mode feels distinct as well, providing an interesting mix up of experiences.  The Cooperative offerings contain far more puzzle aspects than the solo mode, encouraging players to work together and communicate.  Race mode feels intense, but not as intense as the punishing Hardcore mode, designed for veteran players.

In addition to being a solid and satisfying platforming game, N++ also encourages creativity in a big way.  If you haven’t been able to tell from the pictures, the game has a variety of color schemes, which can be changed easily while selecting levels.  As you complete episodes, you unlock new color schemes.  There’s an option available that randomizes the color scheme every 5 levels, which I found incredibly entertaining.  N++ has a very retro vibe to it, and the color schemes can often feel super neon.  A good number of the color schemes look like 80’s snowboarding gear, and not in the good way.  Some of these can be pretty harsh on the eyes, but there’s so many to choose from that it hardly matters.  Since the custom colors change the entire visual nature of the game, it makes a noticeable difference while you play. 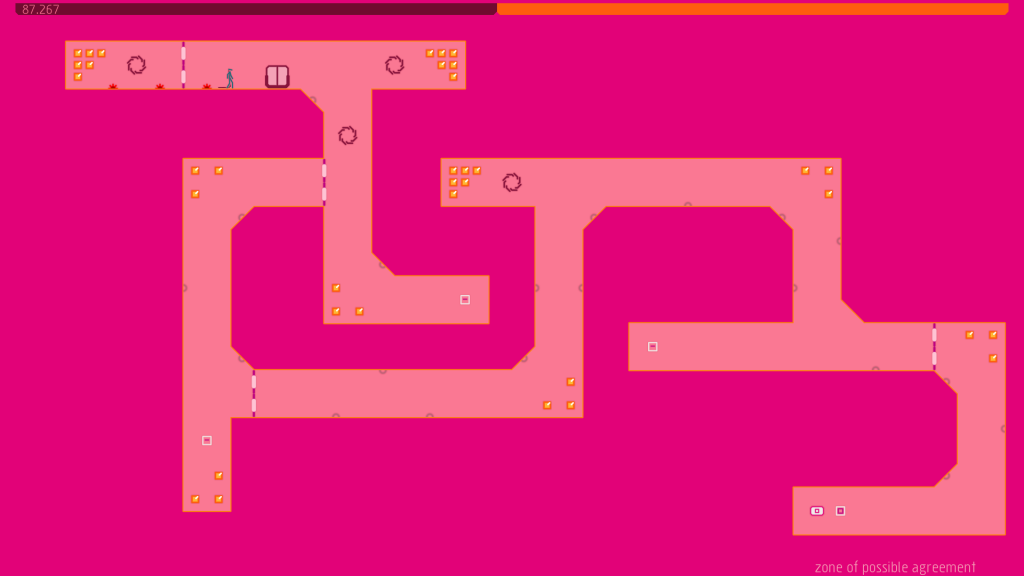 You’ll find a color scheme that clicks with you, and enjoy countless levels of pure platforming.  Before long, you’ll think “hey, I could make a cool level”.  Luckily, N++ also encourages this, by providing a complete level editor right in the game.  You can tinker with the tools and create truly complex creations if you’re so inclined.  I’m more of a player than a maker, so while I appreciate the bounty of creation options, I sadly cannot get my head around them.

Since created levels can be shared online and easily accessed from the main menu, the creation tools are a bonus for even non-creators like me.  Sorted into a good number of categories like Weekly Best, New, and Featured, the entirety of N++ user generated content is at your fingertips.  Exploring what other players have made reveals some of the best levels there are in the entire package, from wacky auto-play levels (pictured below) to incredibly intricate mazes. 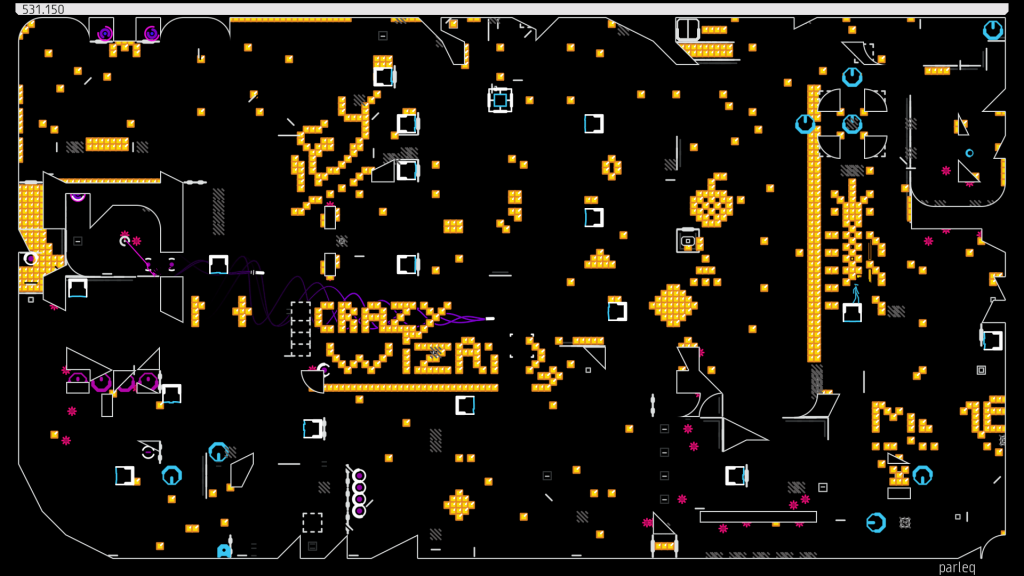 The Bottom Line on N++

N++ is a great platforming game that’s incredibly addicting.  Luckily, there’s an unfathomable amount of content available to play.  For both single and multi-player gamers, N++ has a treasure trove of platforming fun to be had.  Whether you play the over 4,000 curated and professionally designed levels or dip into the wild west of user-created content, you’ll have an an absolute blast.  There’s an excessive amount of customization in both look and feel, with plenty of gameplay and system options to tune.  I can’t think of many negatives, besides the consistent stutter that happens when the soundtrack switches to a new song.  When this happens during an intense level, it can throw your entire rhythm off.  Hopefully, this is an issue that can be patched.

N++ is just one basic gameplay idea, refined to perfection and repeated.  You’ll hop around and dodge obstacles, completing levels until you get bored.  The gameplay loop is plenty addicting, so you won’t get bored quick.  N++ doesn’t do anything truly new or innovative with the formula, but that’s fine.  It’s still an extremely entertaining game, if a bit challenging.  Regardless of your gaming preference, it’s easy to enjoy N++.  I see myself coming back to the game time and time again for the foreseeable future, as once again, N++ provides a consistently enjoyable platforming experience for potentially hundreds of hours.