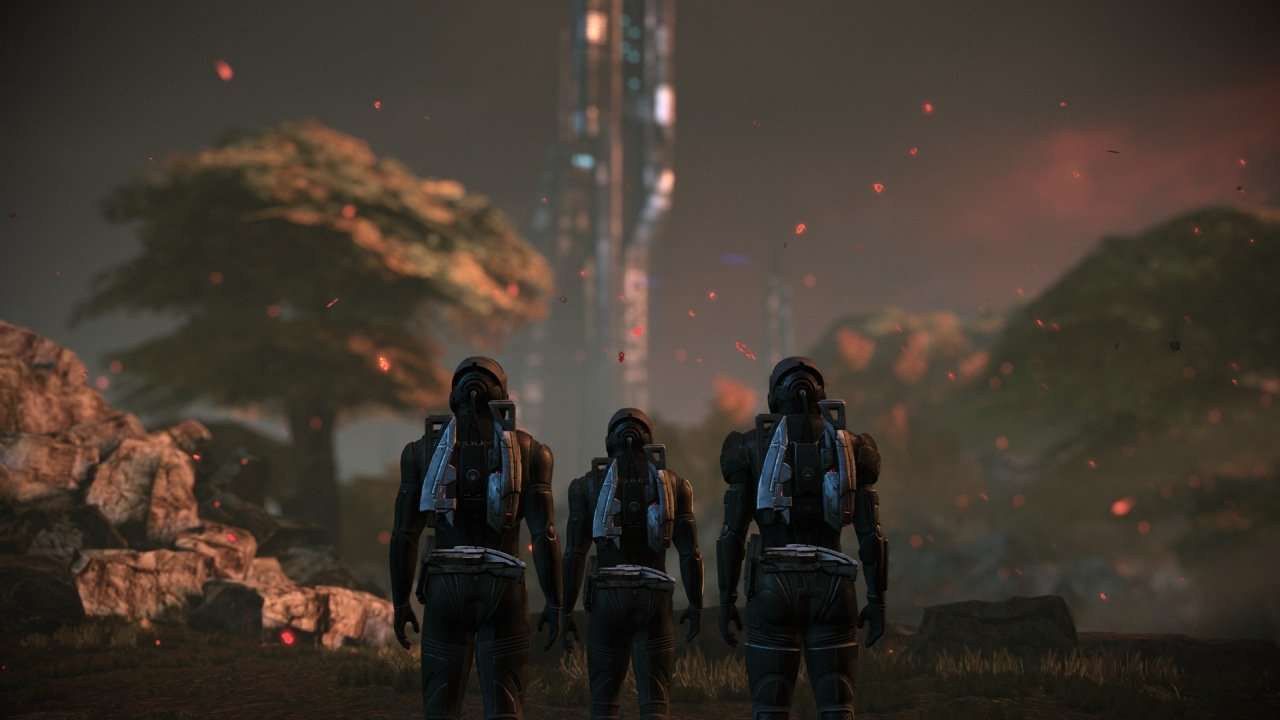 Mass Effect: Legendary Edition follows Commander Shepard, the loyal captain of the Normandy space-cruiser, exploring the vast reaches of the galaxy in an effort to thwart a great evil. Disregarding the quality of other aspects like gameplay and technical performance, the Mass Effect trilogy offers an engrossing world of sci-fi, rich with interesting characters and lore. For the purpose of this review, we’ll mostly be focused on the changes made to the first Mass Effect, but the overall narrative is worth discussing first and foremost.

This wasn’t my first time with the Mass Effect series, so I had a bit of a nostalgic bias when playing for this review, but I tried to go in as objectively as possible. If anything, I earned a greater appreciation for the quality of the storytelling, dialogue, and world-building that weaves through the Mass Effect universe. The developers at BioWare are well-regarded for their expertly crafted worlds and stories, and Mass Effect: Legendary Edition is a shining example of that skill.

Each of the three Mass Effect games have remarkably memorable characters, and thanks to the expressive freedom you have with Commander Shepard, you can form some pretty emotional bonds with them. Assembling your Normandy crew and picking your party members is always a highlight, no matter which of the three games you’re playing. There are also some exceptionally intriguing side-stories to discover in your travels, offering influences of classic sci-fi without detracting from the narrative at hand. While not every plot point or character in Mass Effect: Legendary Edition is a complete win, the world is immersive and I often found my imagination wholly captured while playing. While the narrative is not without its flaws, the original Mass Effect trilogy is one of the strongest stories in gaming, and Mass Effect: Legendary Edition is an excellent way to enjoy it.

The original Mass Effect was released in 2007, and the 14-year gap between then and now is notably apparent at times. Since it’s the oldest game of the bunch, Mass Effect 1 has seen the most visual and gameplay improvements out of the three, helping it remain palpable despite its decade-old game design. The visuals have received a significant overhaul, with sharper character models, added lighting effects, and general tune-ups all around. Everything runs smoothly too, whether you’re playing on a shiny new PlayStation 5 or the weighty Xbox One.

There’s a nice toggle option for graphical fidelity, allowing the player to prioritize the visual quality or the technical performance of the game. While some of the graphical changes can be a bit jarring, including some awkward-looking character models, the enhanced visuals add a dash of modern wonder to many areas of the game. The uncharted planets you’ll explore are rich with visual variety, moody lighting effects, and some dazzling sunsets. Overall, the visual improvements to the original Mass Effect are impressive and appreciated, renewing that sense of wonder and discovery we felt the first time around.

Smoothing Out the Rough Edges

That said, the visuals were never the problem with Mass Effect. While the narrative is intriguing and the characters are engaging, the quality of the shooting combat in the original release left something to be desired. While Mass Effect‘s gunplay hasn’t completely changed, Legendary Edition adapts some of the elements from the sequels, offering a more approachable experience. The UI has been updated, providing a cleaner, less-cluttered screen. Taking cover and shooting bad guys still feels a bit clunky, but it’s significantly better than the 2007 version.

Legendary Edition also attempts to smooth out the driving mechanics, which previously caused plenty of headaches and discouraged exploration. Now, controlling the Mako combat vehicle is a bit easier, and navigational mistakes are punished less. Overall, the gameplay in Mass Effect isn’t perfect, but it never was. If anything, BioWare has done a great job alleviating most elements of frustration in the Legendary Edition version of Mass Effect, allowing the story and characters to properly shine.

Despite these improvements, I encountered a handful of disappointing glitches. I occasionally encountered a bug that wouldn’t let me turn Commander Shepard, while another bug caused my party members to freeze in place. These issues were cleared up after resetting the game or reloading from the previous checkpoint, but they were still annoying to experience. That said, these problems only popped up a handful of times during my 30+ hour playthrough. While there may be some purists out there who favor the original release, I fully believe that the Legendary Edition is the best way to experience the first Mass Effect.

Every DLC for Mass Effect 2 and 3 is included in the Legendary Edition, adding several hours of playtime to an already content-rich package. From Mass Effect 2‘s “Lair of the Shadow Broker” DLC to the Mass Effect 3 “Citadel” DLC, there are some exceptionally engaging stories to enjoy. You’ll also get to recruit some new companions, wield fresh weapons, and gear up with extra armor. The DLC content is seamlessly woven into the main game too, so you won’t have to take any major detours if you want to see everything.

Both of the Mass Effect sequels are just as enjoyable in the Legendary Edition as they were at launch, and are a treat for fans of sci-fi. While the updates to the first Mass Effect helped ease some of the design flaws, Mass Effect 2 and 3 were already so compelling that any visual updates are just icing on the cake. Say what you will about the ending of Mass Effect 3, but as a conclusion to this ambitious trilogy, I’m still very impressed.

When it comes to RPGs set in space, Mass Effect: Legendary Edition is the cream of the crop. Guiding Commander Shepard through this three-part adventure is immensely rewarding, despite a few missteps in the narrative. Shooting through the cosmos with your trusty Normandy crew provides both emotional drama and heart-pounding action, and is an experience that rarely grows repetitive. While the first Mass Effect game can be a bit janky at times, the graphical and gameplay improvements help it along, preserving this aging RPG for newcomers.

Both Mass Effect 2 and Mass Effect 3 find significant ways to build upon their predecessor, filling out the universe with interesting characters, sub-plots, and locations. It’s hard not to venture off the beaten path and explore every nook of the available galaxy, discovering cool new stories and pieces of gear. Simply put, Mass Effect: Legendary Edition combines all three fantastic RPGs into one must-buy package, perfect for longtime fans or eager newbies. If you’re never experienced the saga of Commander Shepard and the Normandy crew, consider this your call to duty. Despite a few annoyances and minor glitches, Mass Effect: Legendary Edition is a wonderful remaster compilation that’s worth playing again and again.