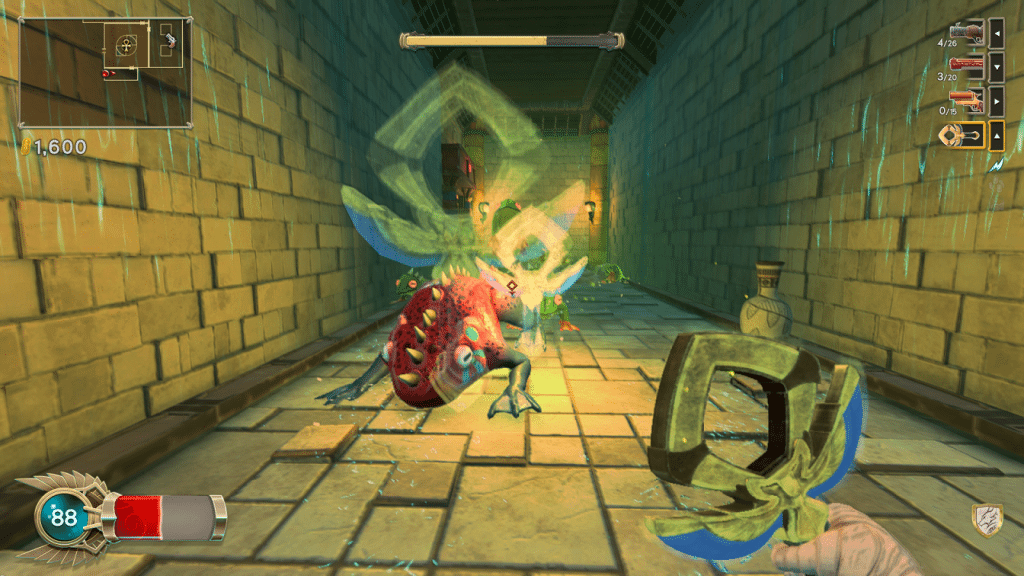 In Immortal Redneck you control the titular hero; part southerner, part mummy, this gun-toting hero attempts to take on three hugely intimidating pyramids.  Trapped in an inescapable cycle of life and death, the redneck attempts to best each pyramid, growing in power with each failure.  Developed by Crema, the game has a distinct cartoonish style that fits with the developer’s history.  Can the redneck overcome the Egyptian-inspired mystique of the pyramids that sit before him?  Let’s see just how well this genre-bending shooter performs. 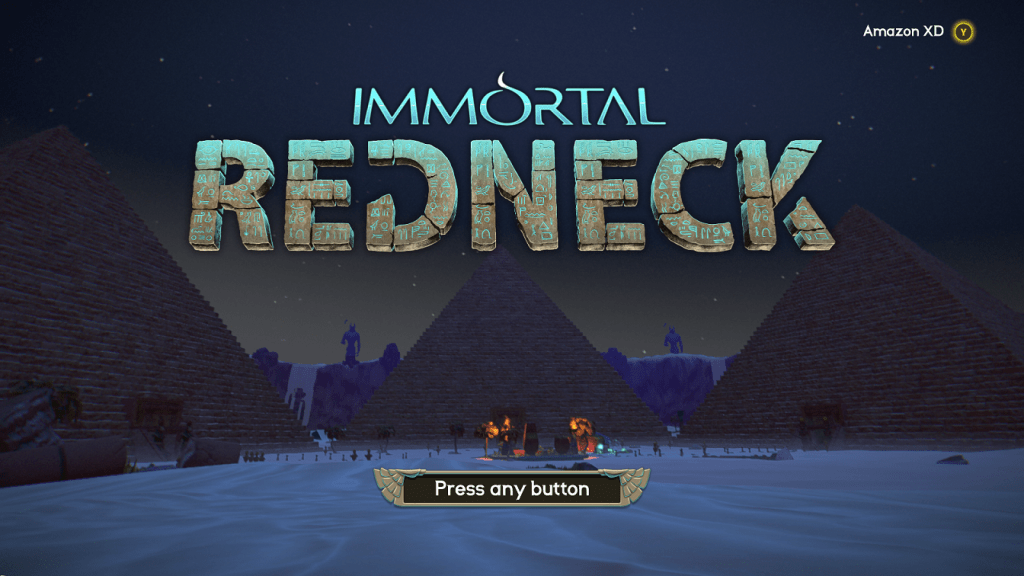 Immortal Redneck takes different features that you would commonly see in a roguelike and injects it into a weird mishmash of Egyptian oddity and foul-mouthed American southernism.  The redneck starts out with a bare-bones inventory of a pistol, shotgun, and dynamite.  You’ll start a run by taking on one of three ominous pyramids, attempting to progress as far as possible before succumbing to enemy attacks.  As you kill enemies, you’ll find new weapons, gold, and other collectibles.  Digging through the nooks and crannys of these forgotten tombs can potential uncover secret chests, containing a great supply of the aforementioned goodies. 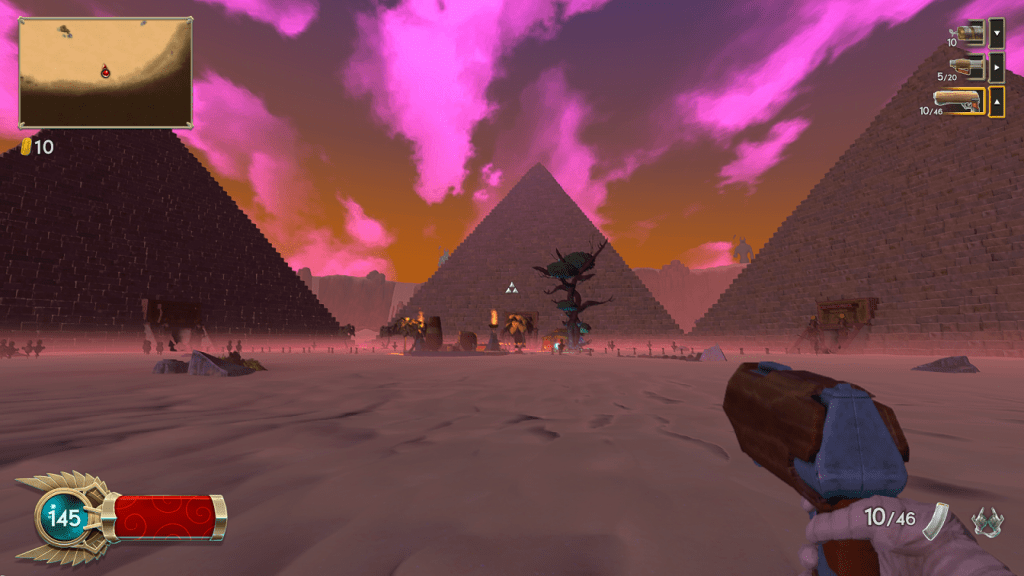 You’ll also stumble across scrolls from time to time.  Scrolls give you special modifiers; some good, some bad.  For instance, one scroll may completely reveal the map to you, while another may hide it altogether.  There’s a risk/reward aspect to scrolls that I quite enjoyed.  There’s nothing more satisfying that picking up an exceptionally good scroll during a great run.  Alternatively, I found my blood boiling when the odds turned against me.  I rather enjoyed the danger of potentially ruining a run, especially when some of the rewards were so high.

Once you fall in battle, you’ll be revived back where you started in the main hub.  You can spend gold you earned on a skill tree, which allows you to upgrade base stats like health, attack power, defense, and critical attack.  Other unique abilities can be unlocked, as well as additional gods and goddesses to control.  Each characters has their own loadout of weapons, a unique ability, and varying base stats.  Since each run provides gold, you’ll always feel some sort of progression.  While you won’t find any truly overpowered abilities on the skill tree, the consistent gain of power feels noticeable, and it was fun experimenting with different characters.  Eventually, you’ll unlock a merchant who sells you consumables and medallions, giving you an extra boost when heading into a pyramid. 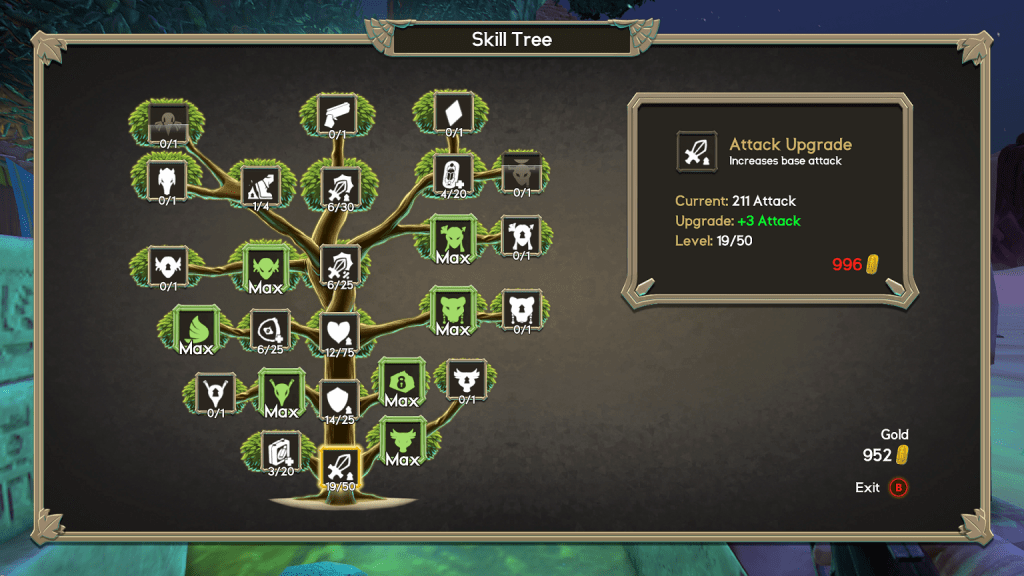 The layouts of the pyramids are what you’d expect from a roguelike; every time you enter a pyramid, the floor plans change.  The rooms aren’t exactly randomly generated, but assembled in a random order each time.  The objective of each floor is simple; clear rooms of enemies and find the stairs to the next floor.  Floors get progressively smaller as you ascend, but enemies get more difficult and contain more health, providing a satisfying difficulty curve.  I was very impressed with the variety of the rooms and the complexity of their design.  Each new room feels like a completely fleshed out area, not just an assembly of walls and doors.  You may start in a giant foyer with branching paths, one leading to a room full of acid baths, the other a fiery labyrinth.  Rooms range in size, some of them being multi-leveled.  By the time you’re powerful enough to finish off a pyramid’s final boss, you should be familiar with most of the room layouts. 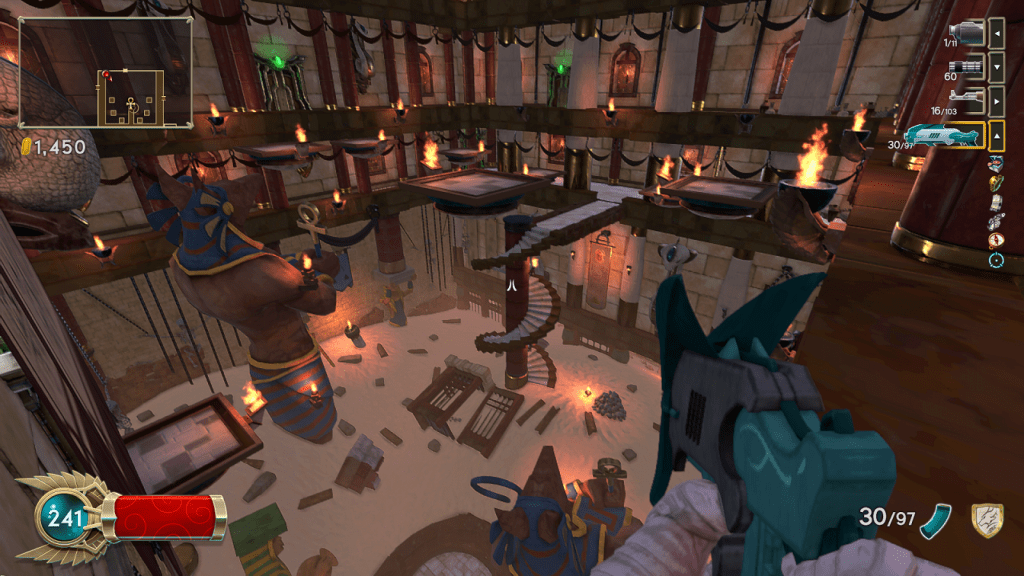 Each of the three pyramids has its own theme, ensuring a freshing coat of paint every time you progress to a new pyramid.  The first pyramid is pretty much what you’d expect; sandy and full of torches, it evokes the Egyptian setting to great success.  The later two pyramids are both vastly different, and I hesitate to spoil the fun.  It’s important to note that each new pyramid also introduces new enemies, new weapons, and brand new room layouts.  This keeps the experience fresh and fun, as you’re constantly being introduced to new toys and tools of destruction.

The only downside to Immortal Redneck‘s layout is its map.  It functions just fine and does a good job noting where doors are located, chests and weapons have been found, and more.  However, there’s no zoom function, making it a strain to read when the layouts get more complex.  More than once I found myself searching for a door, only to find it hidden in a corner.  Had I been able to zoom in the map, the door would’ve been much easier to locate.  While it’s not a huge annoyance, it’s something that caused me an issue occasionally.  It’s hardly enough to ruin the fun, but a bother nonetheless.

The actual shooting in Immortal Redneck feels very good, especially for fans of older first person shooters like DOOM and Quake.  Although it might be a bit loose and too quick for some players, I was in twitch-shooting heaven.  Thankfully, there’s a good amount of customization when it comes to controls.  You’re able to remap buttons and fine tune your sensitivity, and it was nice to see an effort to allow remapping within the game itself.  Make no mistake about it, Immortal Redneck is quick, very quick.  In comparison to modern games, Immortal Redneck feels like DOOM (2016), but faster.  If you’ve ever played Serious Sam, that can give you a good indication on what to expect.  For gamers who have mainly played console shooters like Halo and Call of Duty, the speed may take some getting used to.  The game also contains a good amount of first person platforming, which I was surprised by.  A forgiving clamber mechanic makes platforming a breeze, and it feels really good to hop around the room and blast enemies to bits. 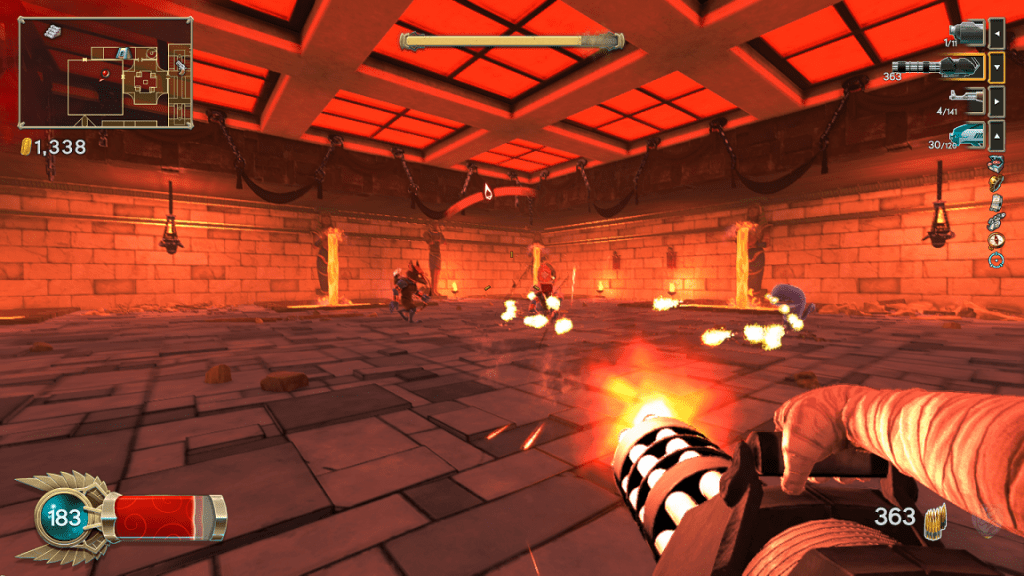 A lot of the fun came from grabbing new weapons and trying them out; finding your favorite guns and seeing what works best in each scenario.  This is where the different gods and goddesses come into play.  While I enjoyed my time with titular redneck, I quickly switched to other characters once I had unlocked them.  I favored the God of Strength, Apis, and the nimble and quick Goddess Neith.  Napis holds four guns; including a minigun, uzi, grenade launcher, and revolver.  His unique ability allows brief invincibility, and he has an insanely high health meter.  On the negative side, Napis can only jump once, compared to the rest of the casts’ double jump.  Neith sits on the other side of the spectrum, using her sniper and crossbow with insane accuracy.  Her unique ability calls out her bird companion, who then swarms the enemy dealing damage.  While I stuck with these two characters for most of my time, I played at least a handful of runs with each character.  Each is viable, but intended for different playstyles and objectives.  Some characters are better at gaining large amounts of gold, while others are better suited for taking on boss characters.

The Look and Feel

I enjoyed the tone of Immortal Redneck, though was initially confused by it.  It’s a goofy tongue-in-cheek brand of humor, and although crass at times, ultimately made me chuckle.  The story is rather light but appropriately so.  Immortal Redneck is great for turning off your brain and holding the shoot button, and it never really punishes you for simply having a good time.  It’s the kind of dumb fun that is comfortable; something you can return to time and time again without having to think too much. 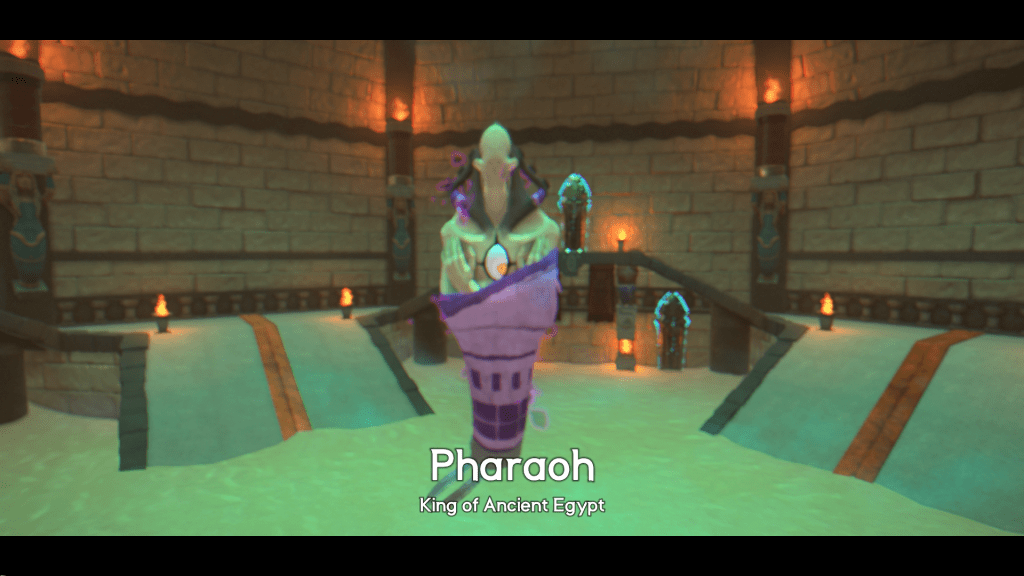 The thing that confused me about it was the disconnect between dialogue and gameplay.  Although there’s multiple characters, you only ever hear the redneck’s voice.  Since the redneck is stereotypical in depiction, I couldn’t help but cringe and the occasional try-hard vulgarity or his womanizing nature.  Nothing is truly offensive, but it simply makes no sense.  The entire game is devoid of blood, gore, nudity, or sexual content.  In fact, I consider Immortal Redneck a fantastic shooter for younger kids, mainly because of that fact.  The visual style matches its cartoonish delivery.  I especially dug the enemy and boss designs, both due to their aesthetic and their distinct features.  Enemies are easy to tell apart even when things get crazy, and the art design of each is pretty inspired.  This lighthearted feel collides with an abrasive voice-over from the redneck, who slings out cursing and off-color jokes like nobody’s business.  It’s obviously a game meant for adults, but it only earns that adult rating for its vulgarity.

The Bottom Line on Immortal Redneck

I had a great time with Immortal Redneck, although I wasn’t really expecting to.  I went in with lowered expectations, and had them completely blown away.  Not everything about it is amazing; some questionable humor limits its audience, and while the art design is fantastic, the game can look a bit blurry up close.  However, these problems (and the others I listed) felt more like small annoyances than deal-breakers, thanks to the incredibly engaging and entertaining gameplay.  Although it’s a bit basic, exploring the pyramids and upgrading my character via the skill tree was a rewarding and adrenaline-filled time. 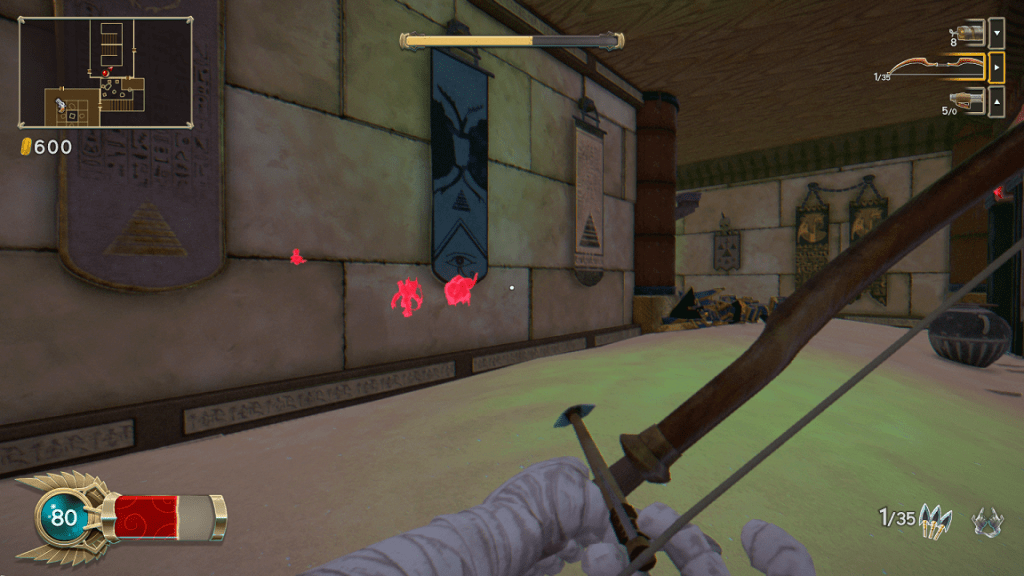 The large cast of characters gives players plenty of reasons to keep playing, as finishing a pyramid with one character is much different than finishing it with another.  Even after you finish the three pyramids, you’ll want to keep collecting gold and filling out the skill tree.  Even though it took me roughly 15 hours to complete the game, I jumped right back in and kept grinding for another couple hours.  Immortal Redneck is a great game that doesn’t demand too much attention from the player.  As long as you can shoot quickly and move quickly, you’ll have a great time.  If you’re looking for a new roguelike and consider yourself a particular skilled FPS player, you should definitely give Immortal Redneck a go.  If you don’t mind the foul language, it’s also a pretty good game for kids and teenagers, with no gore or visual sexuality to speak of.  With plenty of hours of fun at a budget price, Immortal Redneck is easily one of my favorite shooters in 2018 so far, and one of the best roguelikes I’ve played in a while.