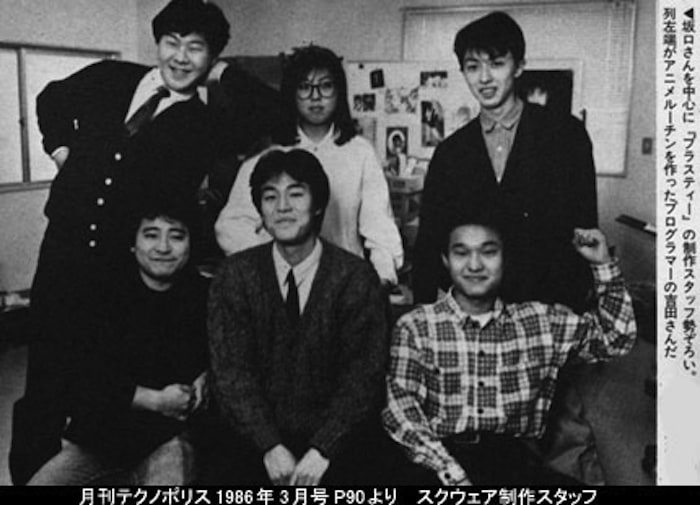 You’ve probably heard the story. In 1987, Hironobu Sakaguchi’s last attempt to make a video game hit proved more successful than he could ever imagine. The first Final Fantasy spawned one of the longest running gaming franchises of all time. He remained an important member of Square, helping their evolution from NES to SNES to Playstation. He stepped out of the spotlight around the time many long-time fans stopped resonating with the franchise. This is his story.

Sakaguchi wasn’t the type of game developer that started writing stories or programming simple games from childhood, he instead wanted to become a musician. He studied piano and aspired to be a singer/songwriter, but when success didn’t come quickly, his attention switched to computers, leading to game creation.

Sakaguchi joined a brand new Square as a part-time employee but quickly moved up to Director of Planning and Development. After his first projects failed to find success, he decided his next project would be his last chance as a game designer. He changed the name of the project from Fighting Fantasy to Final Fantasy to reflect this philosophy. This was a different time when RPGs were far from mainstream. Square had actually refused to let him make one until Dragon Quest proved the genre could be successful.

Final Fantasy expanded on Dragon Quest’s one-on-one battles to a fuller four-character party system. The player also got to choose any combination of classes for the four characters (Fighter, Thief, B.Belt, Black/White/Red Mages). This tied the game closer to the pen and paper RPGs that inspired the video game versions of the genre. 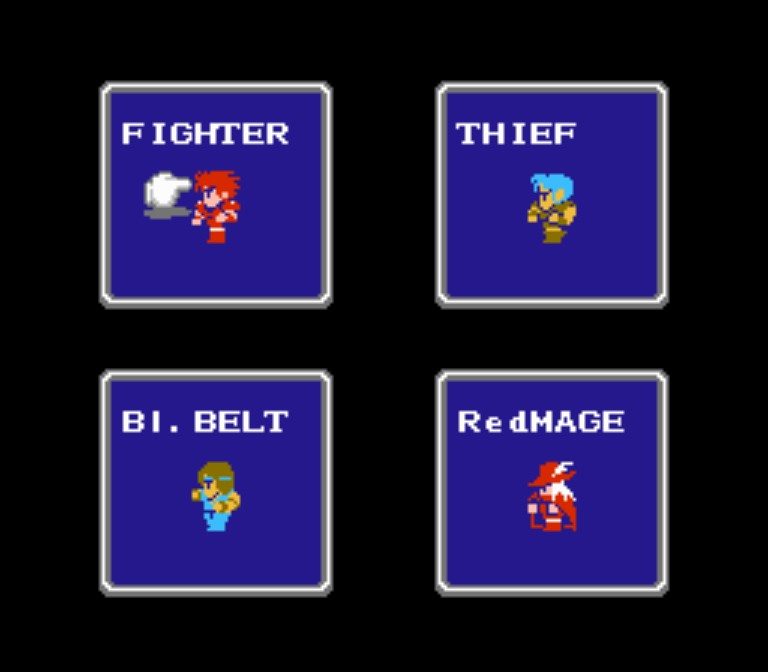 To secure the potential for a sequel, Sakguchi had to beg Square to up their production of ROMs from 200,000 to 400,000. Game manufacturing back then cost a lot of time and money so however many were produced, usually became the ceiling for sales.

Sakaguchi’s faith in the game and ability to convince Square are the reason the franchise has lived on. 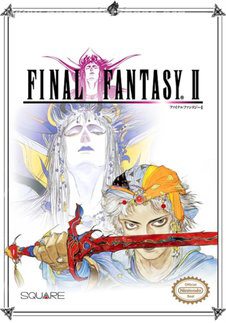 This time, Sakaguchi would fully write the story first, and then create the game mechanics around it. He was also promoted from Planner to Director, to facilitate the much larger team.

A one-off experiment saw the traditional EXP system ditched for a new mechanic that leveled up attributes through use. For example, this meant characters could only increase their HP by taking damage! It was meant to provide realism but the system would not return to the series.

Released in 1990 – close to the SNES launch – Final Fantasy III wouldn’t be available outside Japan for many years after.  III was one of the biggest NES ROMs ever made and the final steps of production were moved from Japan to the USA after their programmer Nasir Gebelli’s work Visa expired.

The job system was introduced, allowing characters to learn and trade new abilities. This expanded on the freedom Sakaguchi introduced with the first game’s character selection. Now players could modify their team makeup as they played. 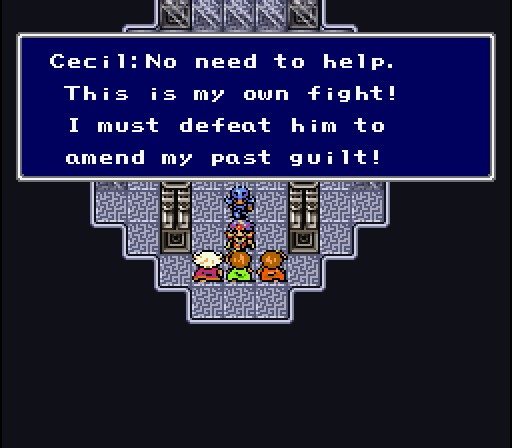 Sakaguchi took Final Fantasy to the SNES and greatly expanded the storytelling and visual presentation. Mode 7 graphics added a cinematic flair as Sakaguchi weaved an emotional tale of redemption for Cecil, the Dark Knight. Previous entries were much more shallow compared to IV’s novel-like narrative and large cast of personable characters. 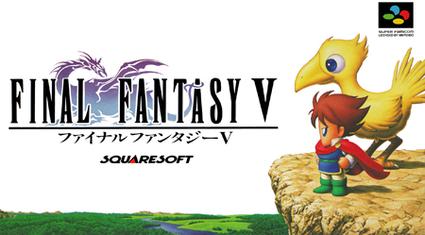 This would be the last Final Fantasy with Sakaguchi as the sole Director. He worked closely with Kitase on VI, but moved up to Producer for the next entries before leaving the company. He and Kitase co-write V’s scenario, with Kitase hoping to balance out the serious tone with lighter elements.

Square figured the tone was too different and difficulty too high for North American audiences to appreciate. This led to several aborted ideas of retitling the game under a different umbrella. It wouldn’t see an official North American release until the first Playstation.

Sakaguchi said this was his favorite Final Fantasy until IX. Both share traditional medieval fantasy settings.

In just over one year, Sakaguchi’s team produced Final Fantasy VI, a game many cite as the peak of the franchise and the era.

Although Sakaguchi’s promotion took him out of the Director’s chair, he still came up with the story premise,  supervised Kitase’s Direction, and was responsible for the project coming together cohesively. He even designed a few characters (Terra and Locke). 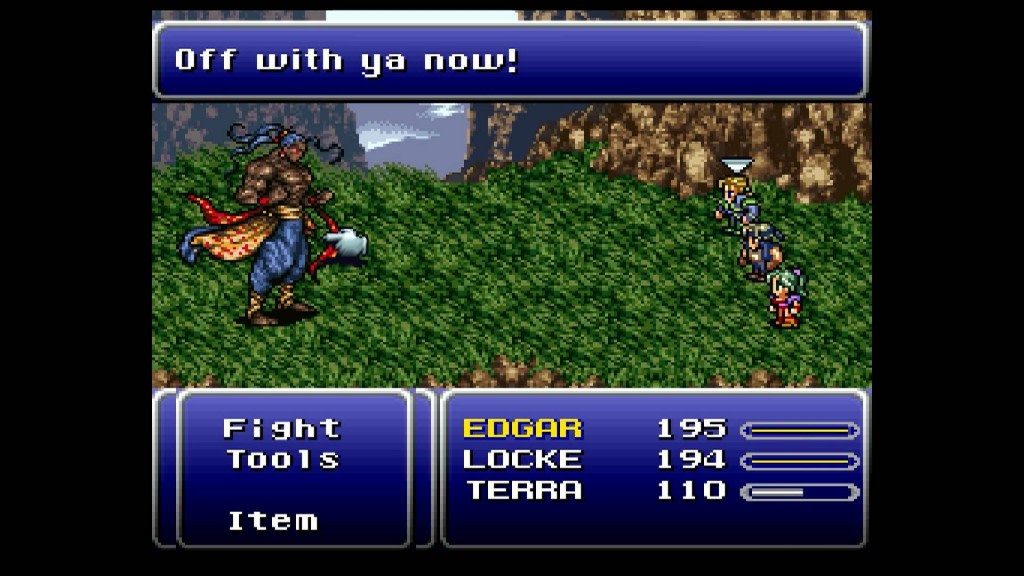 Sakaguchi spoke of competing with Kitase to produce the best story elements, but realizing they had different strengths. He mentioned that Kitase could out-do him when it came to flashy set-pieces (like the ghost train), so he would rely on his penchant for emotional ‘make you cry’ moments.

VI was the pinnacle of what the series had learned in five previous installments and of the SNES hardware, culminating with a progressive cinematic presentation and a confident swagger in story and characters. 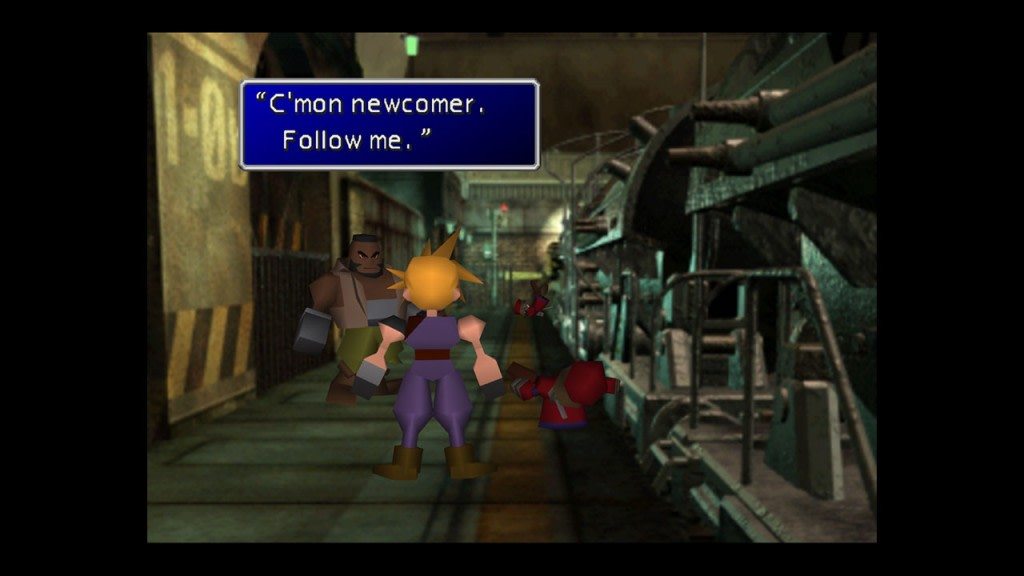 Sakaguchi wrote the initial concept, but set it in a modern New York. This concept would be vastly reworked while the original idea would be converted into Parasite Eve. 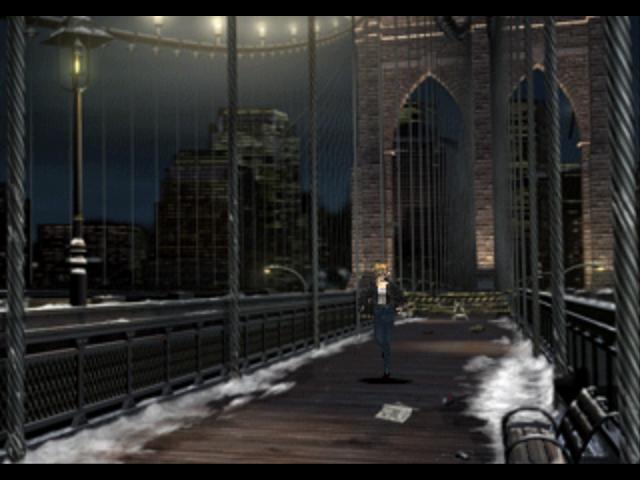 One of Sakaguchi’s original ideas was the Lifestream, something he conceived to help deal with the passing of his mother. Expanding on the Lifestream, he said it was “not enough to make ‘life’ the theme, you need to depict living and dying. In any event, you need to portray death”.

The idea of life and death inspired Nomura to suggest the death of Aerith. The team then created Tifa as a way to balance out the death of the main heroine.

Square invested heavily into visual technology to produce the impressive sequences seen in FF VII. The marketing was almost entirely CGI and led to a huge buzz before release. This investment was also to be used for the upcoming film Final Fantasy: Spirits Within, to be directed and written by Sakaguchi. After Final Fantasy VII – beginning with Xenogears – Sakaguchi would only be credited as Executive Producer, moving his focus to Square’s new Film Division, to work on Spirits Within. The lone exception would be his writing on Final Fantasy IX. 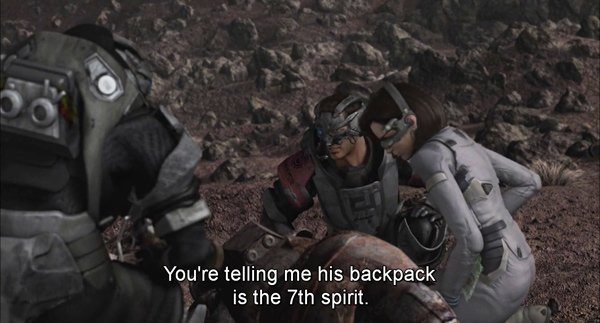 The Spirits Within was a large risk and failure for Square and Sakaguchi. It was a tough sell for mainstream audiences that weren’t used to realistically animated films with fantastical plots, yet Final Fantasy fans felt the story had very little connection to the franchise.

The failure of Spirits Within saw the film studio shut down and Sakaguchi would eventually step down from Square. 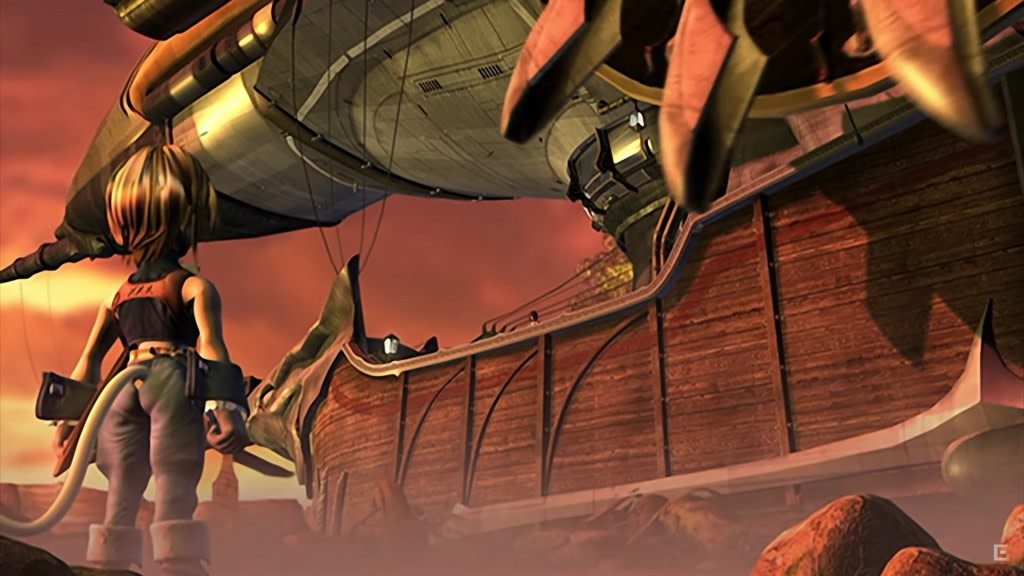 Sakaguchi’s last major contribution to the franchise was writing Final Fantasy IX, a throwback to the traditional elements of the series. Sakaguchi veered away from the sci-fi of VII and VIII to focus back on medieval fantasy. Black Mages, Knights, Thieves, Castles, and more would populate his last grand adventure with Square. Sakaguchi called IX his favorite, saying it was closest to his vision of what Final Fantasy should be.

“When I first left the company, I did feel that Squaresoft was taking the games in a direction that I didn’t want them to, specifically with Final Fantasy XIII. I wasn’t particularly happy with it.”

Sakaguchi left Square in 2003 and started Mistwalker, a studio financially backed by Microsoft. Their first two projects were Blue Dragon and Lost Odyssey, both exclusive to the Xbox 360.

Blue Dragon and Lost Odyssey were mostly developed simultaneously but in conjunction with separate studios (Artoon for BD and feelplus for LO). They released in 2006 and 2007 respectively. 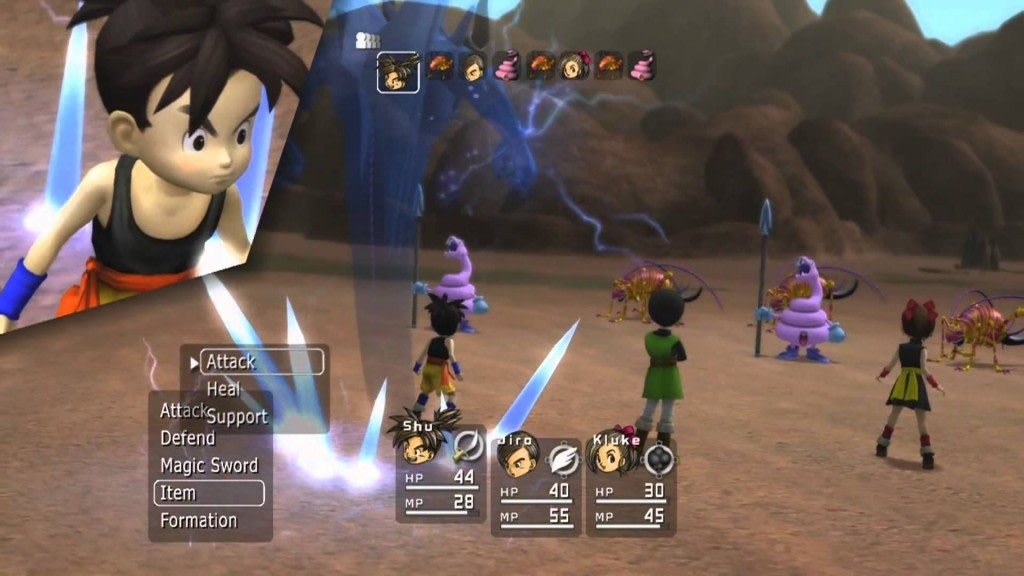 Lost Odyssey took the opposite route, embracing realistic characters (except for the gigantic hands) and feel.

Sakaguchi shocked the industry by producing his next large-scale RPG – The Last Story – on the Wii in 2011, near the end of its lifespan ( The Wii U debuted in 2012). 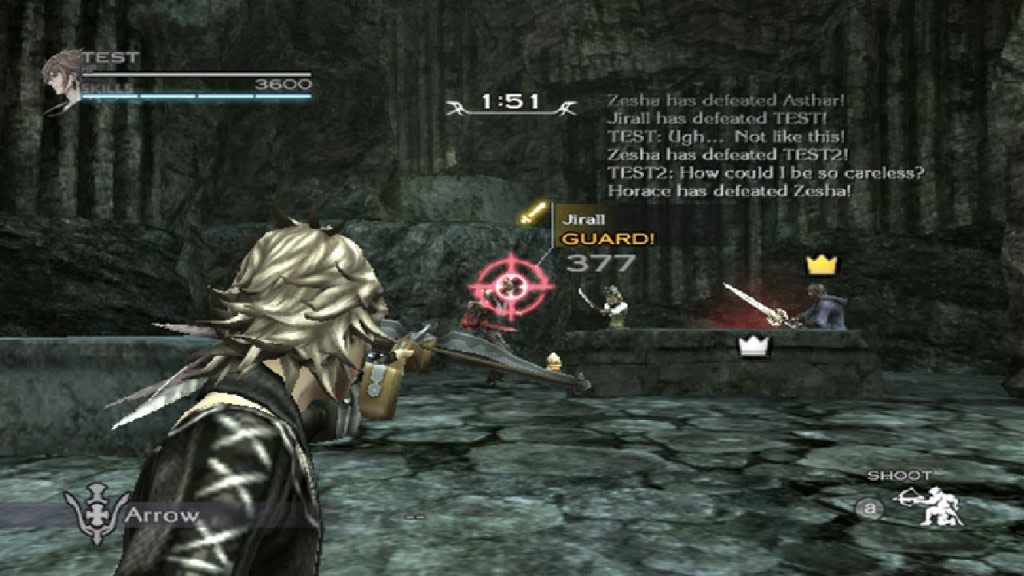 The Last Story was inspired by the reception to Blue Dragon and Lost Odyssey. Sakaguchi thought that while their storytelling was progressive, the gameplay systems were too traditional for the modern gaming market. He was inspired to embrace a new action-oriented battle system for The Last Story, spending the first year of development on the battle system mechanics alone.

“I have a formula from the 25 years experience I have in the industry – an RPG formula. Which is a turn-based, orthodox JRPG. But for The Last Story, I wanted to completely change that formula and come up with something new.”

The Last Story saw a close involvement with Nintendo, who shot down Sakaguchi’s sci-fi setting, preferring he stick mostly to fantasy, although Sakaguchi included some sci-fi pieces. Many critics negatively cited the overly traditional narrative and characters. Who knows what sci-fi wonders we might have seen if Sakaguchi’s unfiltered vision came through?

Sakaguchi once told an interviewer that if today’s gaming technology existed when he was younger, he would have been too intimidated to join the business. After The Last Story he downgraded his scope to work on mobile games. 2012 saw surfing game Party Wave and tower-defense Blade Guardian, while 2014 started his new franchise with Terra Battle.

Terra Wars is currently the only named title in development, and Sakaguchi says it will combine sci-fi with playful art styles. He even name dropped the film Interstellar as an inspiration.

I think it’s fantastic to see a motivated Sakaguchi interested in using new tech to create new games that hearken back to what made his contributions to Final Fantasy so successful. After all, if Final Fantasy VI was made in just over a year, anything is possible with the right scope and vision. 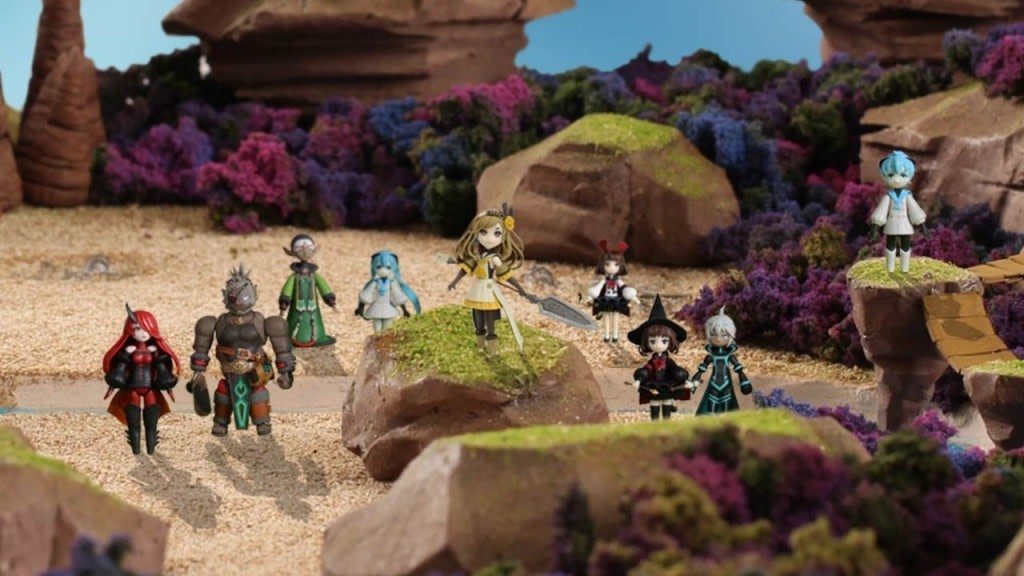