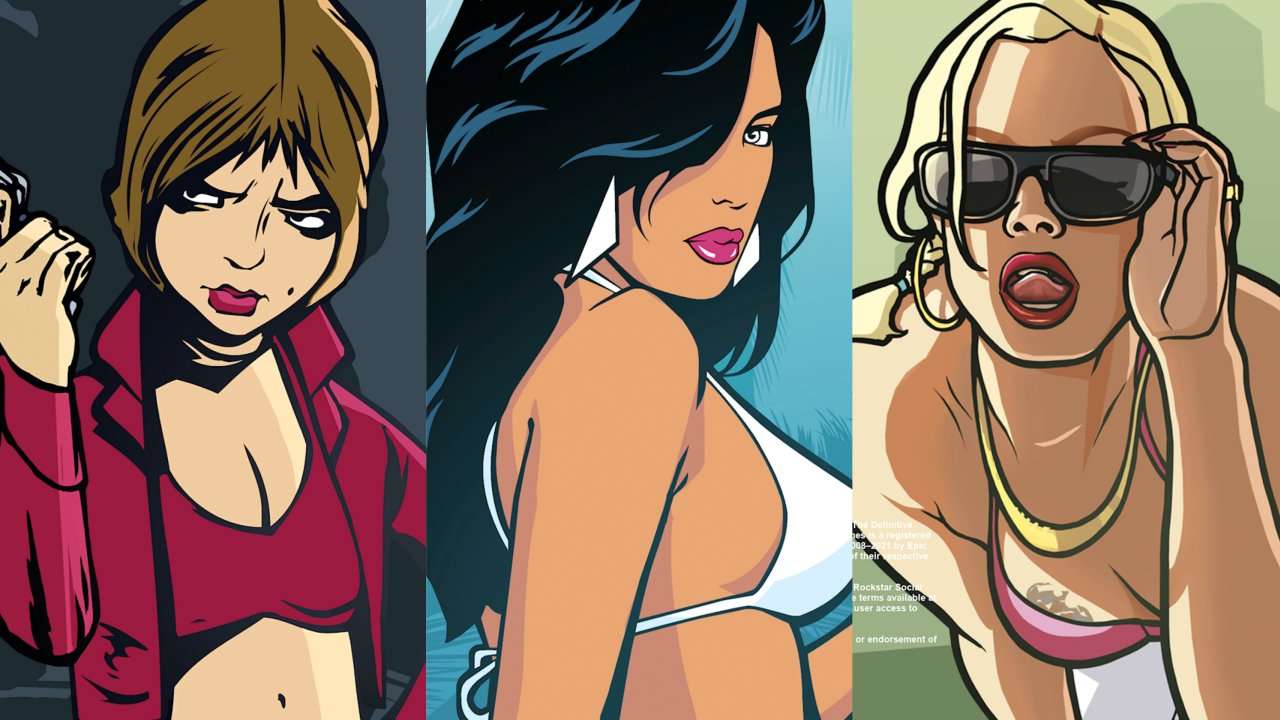 Grand Theft Auto: The Trilogy – The Definitive Edition is a compilation package published by Rockstar Games and developed by Grove Street Games, which contains three classic GTA games with some modern bells and whistles. Included in the bundle are Grand Theft Auto III, Grand Theft Auto: Vice City, and Grand Theft Auto: San Andreas, each an iconic and enormously influential release in the notorious open-world action franchise. These three titles have been revered as some of the most entertaining games ever made, which revolutionized the genre on release and created some unforgettable memories along the way. Does GTA: Trilogy – Definitive Edition provide a great way to experience these groundbreaking games, or is this remaster pack a sloppy thrown together attempt at squeezing cash out of the fan base? Unfortunately, the answer is both.

Each title in GTA: Trilogy – Definitive Edition puts players in the shoes of a lowly hustler who works their way up the ladder of organized crime. In GTA III, you control Claude, a silent bank robber who is betrayed by his girlfriend and left for dead after a deal gone sour. Through a stroke of luck, you escape from imprisonment during a jailbreak on a transport van and wind up in the ruthless metro of Liberty City. Although you start out as a driver for the mob, you’ll soon find yourself in the middle of a gang war between the yakuza, Columbia drug cartels, and more. There are some fun twists and turns along the way, but the story in GTA III is notably straightforward. Most characters lack depth and the plot is somewhat predictable, but it’s still an engaging tale of crime drama set in a personable city full of neurotic characters.

Better care is paid in the narrative of Grand Theft Auto: Vice City, which follows Tommy Vercetti (voiced by Ray Liotta), a tropical shirt-wearing gangster who arrives in sunny Vice City after being released from prison. Partnering up with the skeevy lawyer Ken Rosenberg, Tommy tries to break into the drug trade circa 1986, but runs into resistance from the local cartel. In true Scarface fashion, Tommy defies his bosses and sets out to form his own criminal empire. Between the drug-lord fantasy and the evocative atmosphere of the late-1980s, Vice City establishes a neon-drenched story that’s far better than Grand Theft Auto III‘s plot, but still lacks a bit of depth. Out of the three games included in the collection, Vice City arguably has the most style and pushes the quality of storytelling up a notch.

GTA: San Andreas has the most intriguing and subversive plot, set in the sprawling west coast state of San Andreas. The lengthy story follows Carl “CJ” Johnson, an ex-gangbanger who returns to his hometown stomping ground of the Grove Street neighborhood after his mother’s death. CJ quickly falls in with his old friends in the Grove Street gang, including the always-inebriated Ryder and fast-food lover Big Smoke, as they attempt to reclaim their dominance over the hood.

However, it’s only a matter of time until CJ’s ambitions send him across the vast state, interacting with everyone from rap artists to conspiracy theorists and everyone in between. Not only is San Andreas the most compelling story in the classic Grand Theft Auto trilogy, but it’s also the funniest, with tons of laugh-out-loud moments of satire. All-in-all, the stories in these classic games get progressively more complex with each sequel, but each one is memorable in its own way.

The Life of a Gangland Underdog

All three games offer a similar gameplay loop; you’ll cause mayhem around the city as you complete story missions for various characters, all the while evading the police and stealing loads of cars. Grand Theft Auto III is the most rudimentary of the collection, but does a good job establishing the formula. GTA: Vice City and GTA: San Andreas offer a more polished take, with the latter expanding into RPG territory with modifiable character stats. Regardless of which Grand Theft Auto you choose to play, you can expect arcade-style driving physics, great radio stations to listen to, and rampant chaos. As always, you’re free to ignore the story at hand and engage in free-roam activities, including taxi and firefighter missions, driving off of stunt ramps, scouring for hidden packages, or going on an insatiable rampage of violence. Vice City and San Andreas are both abundant with side-content, including businesses to buy and operate, extra gangs to run missions for, and of course, the often-dreaded RC toy side-missions.

Although the new visuals are the supposed selling point of the package, there have been a handful of gameplay tweaks introduced as well. For example, you now have the option of placing waypoints on the map, which draw helpful driving lines to your desired destination. While this isn’t as necessary in the relatively small confines of Liberty City and Vice City’s multi-island maps, it’s a welcome addition for the much more expansive state of San Andreas. The exceptionally clunky shooting has been made slightly less bothersome through the addition of a lock-on aim assist feature, but it’s less than ideal, occasionally locking up and costing precious seconds of safety during gunfights. A modern control scheme has also been added, but you can switch back to classic controls if you prefer them.

During my playthroughs of all three games, I also noticed some general gameplay balancing, with some previously tough missions feeling much more manageable. For example, the mission “Bomb Da Base: Act II” in Grand Theft Auto III is notoriously hard, but I found it easy to pass on my first go. Other similar missions, like “A Drop in the Ocean” also felt much more forgiving than in the original versions, likely due to increased player damage and increased AI companion health. The dreaded RC helicopter missions in GTA: Vice City were also smoother, but this could be attributed to the modern controls. The new checkpoint system also works to mixed success, with GTA: San Andreas even offering mid-mission checkpoints. Even with all that considered, the trilogy still has its fair share of frustrating moments, often due to unfair deaths, small gameplay glitches, or confusing objective prompts.

As with most modern remasters, Grand Theft Auto: The Trilogy – Definitive Edition casts a new coat of paint onto all three games, but the results might not be what you expect. This is definitely not a full remake, as characters still retain their blocky appearance, providing a slightly cartoonish feel. The textures have all been rendered in the new Unreal engine, giving elements like car paint and billboards a glossy finish. New lighting also bumps up the realism, especially in the neon-lit streets of Vice City. The draw distance has also been heavily increased, giving you a more complete view of the map from further distances. This is the most apparent in Grand Theft Auto: San Andreas, which has the largest map of the three. However, the awkward-looking character models clash with the realism of the environment, resulting in a weird juxtaposition of new and old.

While the new graphics work in some areas, they are woefully underwhelming in others. While the visuals are undeniably higher in resolution, they make all three games look somewhat similar, removing some of the original atmosphere and tone. For example, San Andreas is no longer covered in a smoggy haze, as the fog was initially used to disguise the hardware limitations at the time. Although it’s nice to see more of the map, the city feels far cleaner than ever before, which just looks weird.

Surprisingly, all three games also have consistent frame-rate drops whenever there’s excess traffic or lots of lighting sources, dipping far below 60 frames per second. Considering that every game in this collection is over 15 years old, it’s mind-boggling that they have any sort of performance issues on next-gen systems like the Xbox Series X or PlayStation 5. Also, despite the improved draw distance, texture pop-in is frequent and noticeable, with many visual elements not fully loading in until you’re a few car lengths away. Ultimately, the updated graphics are lackluster, with the originals being preferable in terms of establishing a unique visual identity. That said, the updated graphics occasionally provide some impressive moments, but at the cost of tone and atmosphere.

The Bottom Line on Grand Theft Auto: The Trilogy – The Definitive Edition

To be frank, putting a numerical rating on Grand Theft Auto: The Trilogy – The Definitive Edition is tough. On one hand, it contains three timeless open-world adventure games that are still wildly entertaining and addictive, totaling well over 150 hours of content in one package. The games feature iconic characters, fun missions, and some of the most memorable world maps of all time. On the other hand, it’s a glitchy mess that reeks of slapdash enhancement made solely for the purpose of a quick buck. Considering how revered these three games are, it’s surprising that they’ve been remastered with such a clumsy hand, at times looking and performing worse than the originals.

The way I see it, Grand Theft Auto: The Trilogy – The Definitive Edition is full of flaws but still fun to play. Despite its title, it’s far from the definitive way of experiencing this trilogy, as the PC versions still outclass this compilation. However, some of the bigger changes are welcomed and appreciated, such as the extra checkpoints and slight auto-aim assist. For those who have fond memories of causing mayhem in Liberty City, Vice City, and San Andreas, you’ll likely be frustrated by the modern visuals but will still find plenty of enjoyment to be had. It’s not a terrible remaster pack, but it’s a far cry from what this genre-defining series deserved.