How often have you heard that a game doesn’t get good until you’re a few hours in? How often have you been bored to tears by a slow tutorial that constantly takes away control to show you cut-scenes of characters you don’t know or care about yet? Final Fantasy VI is here to show how it’s done.

I am done with the slow start excuse. The beginning of a game/movie/series/novel/ should use those precious opening moments to set the tone and hook the player/viewer. Every second can and should be utilized. The opening shot, the introduction to the characters, the color palette, sound, and of course the first moment you have control will leave a valuable first impression on the player. Don’t waste this chance!

Since games began adding more cinematic elements (cut-scenes, voiced dialogue) we’ve seen a struggle with maintaining a proper balance of play and watch. Modern AAA gaming too often fails us in the opening moments, forcing the game to win back the attention and momentum it forfeited immediately.

In this written and video series, I’ll be analyzing the first moments of a game. Later, I can compare those sequences to other games in the genre or franchise.

Our first candidate was inspired by my good friend Ed. Ed has recently been wanting to get back into gaming but constantly grows disinterested with many newer titles. He went back to Final Fantasy VI and found he was hooked from the first moment. I was intrigued, and thus, we have:

The First Five Minutes of 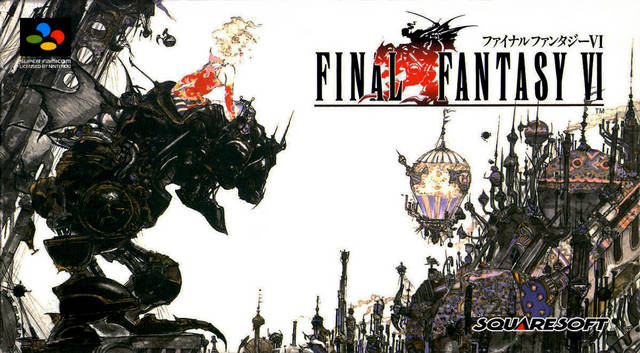 Backdrop of snowy cliffs: Intimidating, barren. Story scrolls about War of the Magi reducing the world to a scorched wasteland, magic ceased to exist. Camera scrolls further down to reveal a bridge. 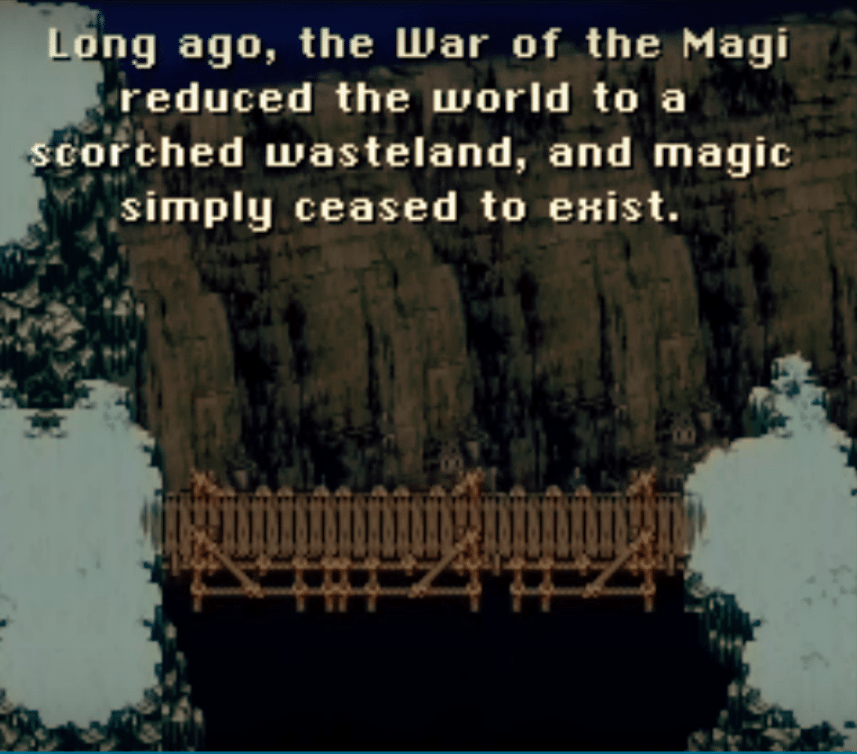 Next scene text says 1000 years later, iron gunpowder, and steam engines have been rediscovered, high technology reigns. Camera now scrolling up over a town showing this technology. Still snowy and rocky, must be in the same place as the first scene, but from a different perspective. Many houses, people bustling. Seems prosperous, tech has helped people. Yet music is ominous. 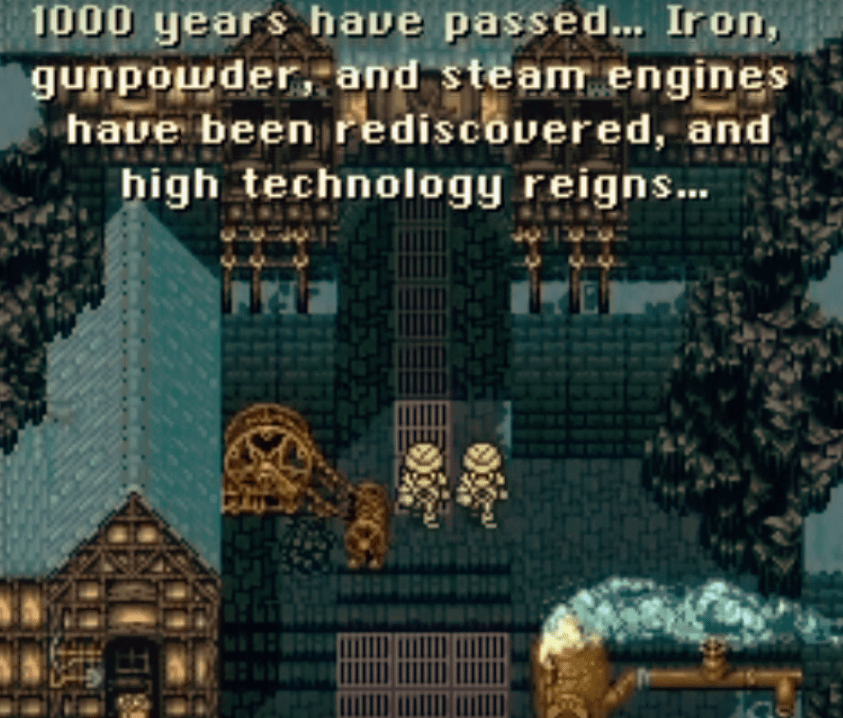 Third scene’s text gives answer to ominous music over prosperous tech: “But there are some who would enslave the world by reviving the dread destructive force known as “magic”. The camera pans up over monstrous structure. Cold, lifeless, steel, intimidating in size, dwarfs the town. Snow falls. Same place and time. The camera pans right and a lone figure is seen for a split second moving out of frame. This character will eventually match up with the text warning,. But we can only wonder for now, and many will have missed his appearance. The camera pans back down towards where this figure disappeared. Music gets hopeful, then sad. 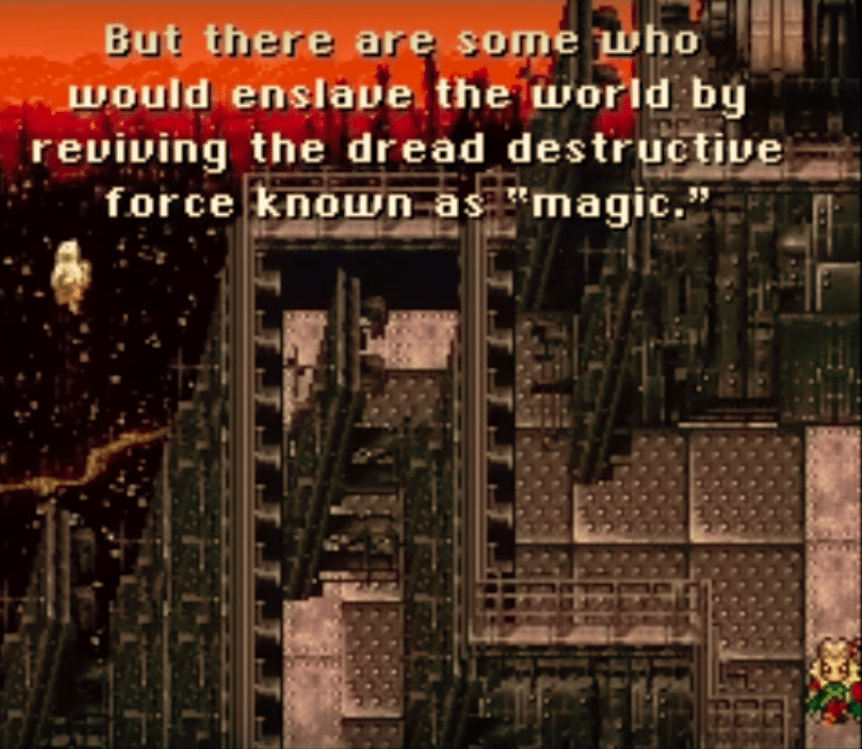 The fourth scene shows snowy mountain from the first scene with text that ‘Can it be that those in power are on the verge of repeating a senseless and deadly mistake?”.

This first minute has the most important parts of the backstory and lets us know the present conflict. Magic was destroyed in a catastrophic war but humans have built themselves back up with tech. We also know that someone could bring magic back to enslave the world and that someone could be on the verge of making this mistake.

One minute of exposition was efficient but also delivered in stages that created tension, asked questions, and gave just enough answers to be cohesive while leaving plenty of mystery. 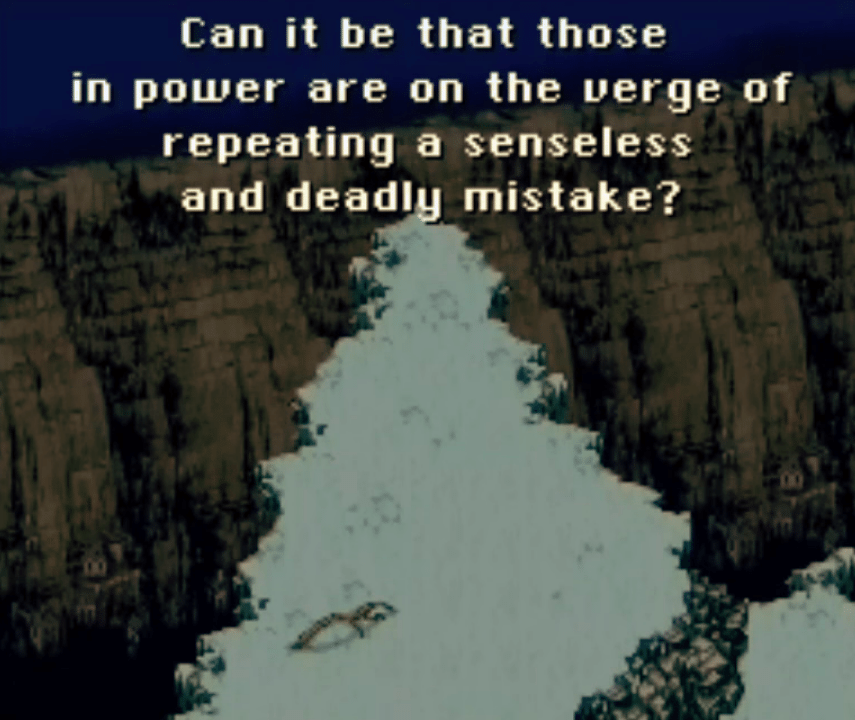 The camera rests on a white peak in this lonely cliffside for a long moment as the wind howls. Three figures eventually reach the peak in hi-tech suits. Two are helmeted guards, one is a girl without armor. What is their relationship we wonder? 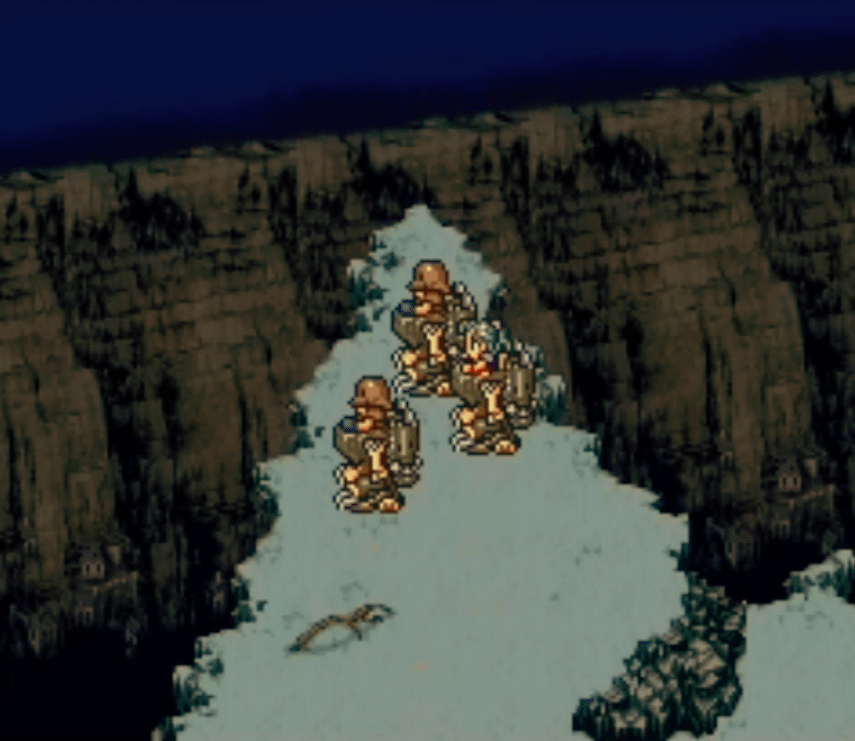 The first words spoken are from VICKS: “There’s the town…”. We assume he means the town we just saw. We know this snowy area and the snowy town are in close proximity. Letting the viewer know where they are is obviously important but too often forgotten.

WEDGE speaks: ”Hard to believe an Esper’s been found intact there, 1000 years after the War of the Magi…” 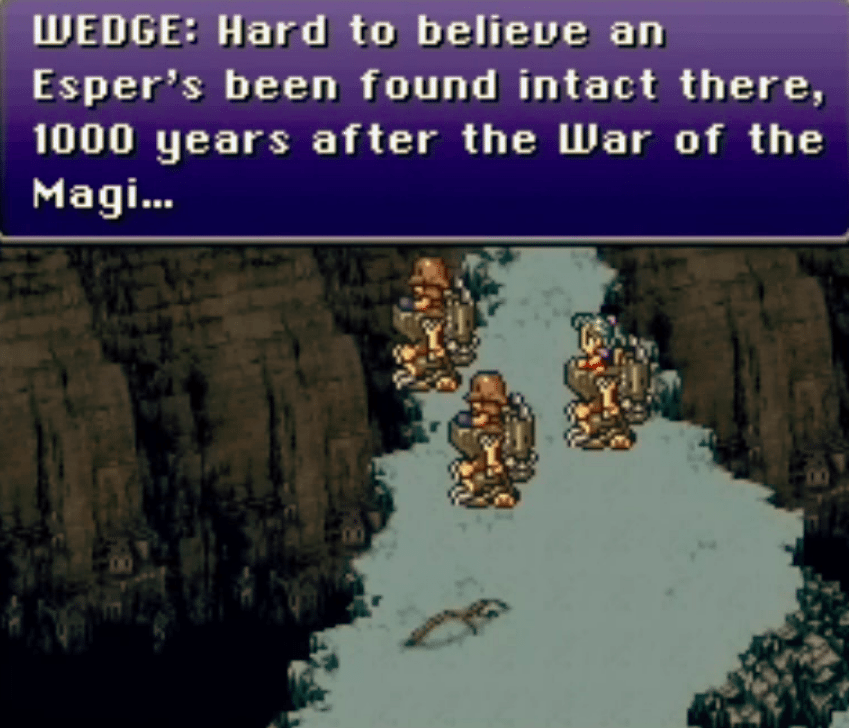 This Esper sounds rare and is capitalized for importance. It also must be magical and a part of the previous magic-filled world since it’s rare to find one so long after the Magi war.

The soldiers ponder if it’s still alive, letting us know the Esper is a living thing, not a mineral. WEDGE assumes it is ‘judging from the urgency of our orders’. The plot has already let us know how important Espers are and introduced the doubt that it might still be alive.

The girl is finally addressed.

VICKS: And this woman, this…sorcerer. Why’s she here?

Whoa, we know magic is bad news, yet they have a sorcerer with them, and the soldiers aren’t even important enough to know why!

VICKS tells us she ‘fried 50 of our Magitek Armored soldiers in under 3 minutes’.

Whoa! She’s a powerhouse! We know she could easily kill 25x the amount of soldiers currently with her. She must be in charge, or enslaved somehow.

WEDGE: “Not to worry. The Slave Crown on her head robs her of all conscious thought. She’ll follow orders.”.

Ok. Now we have empathy for this badass girl. We know the soldiers are baddies and that we probably don’t want to see them get the Esper.

WEDGE ends minute two by saying they’ll approach from the east and yells ‘Move out!’. This feels authentic to how a soldier would think and speak in the situation. They walk away, with the Slave sorcerer following behind.

Fade to black. Fade in with one of the greatest Final Fantasy tracks of all time. The three figures march upwards as the ground scrolls toward like the music sheet on an old player piano. Snow falls and the mountains in the distance slowly move closer.

The track is driven by a persistent military snare while a mournful melody cries a call and response. It sounds hopeful yet melancholic, as if trying to fight against the relentless snow itself.

Credits roll during this scene, like a film. This was rarely if ever seen in video games at the time. Gamers knew they were in for something special.

Two minutes for the song and walk, the longest we’ve spent on one section so far and its one continuous shot. This game had swagger.

Guards remark on your Magitek armor as they initiate the first battles! They’re completely outmatched however, doing a paltry 6 damage while your attacks wipe them out with each attack of 200-400. It’s clear you are the aggressors, slaughtering a brave resistance. This further characterizes the soldiers as evil and adds importance to an Esper worth protecting at all costs.

In just five minutes, we know enough backstory to get a feel for the world, and understand the stakes surrounding the Esper. We’ve also gotten to control the character and get a feel for battle. Every second has contributed to the tone and the tension keeps rising as you inch closer to the Esper, one group of demolished defenders at a time.

Final Fantasy VI is one of the greatest adventures of all time, and it starts with the first five minutes.